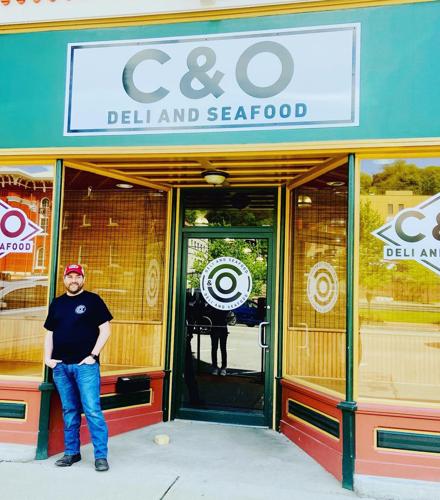 Trevor Peterson at his storefront for C&O Deli and Seafood on Main Street in Brookville. 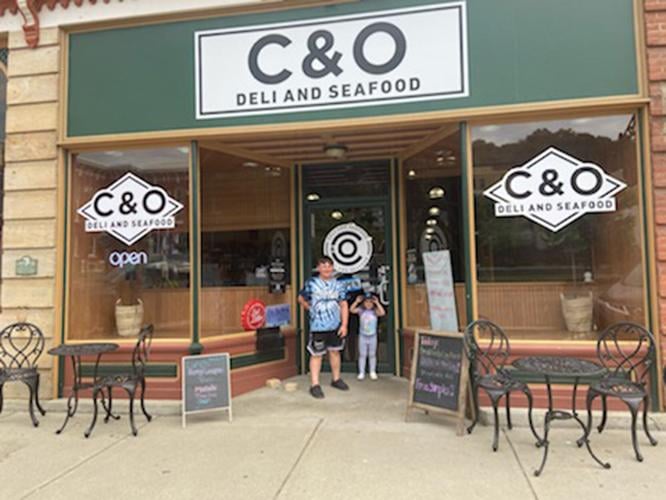 Cooper and Olivia Peterson at the front of their father’s deli, as they were the inspiration for the name of the store.

Trevor Peterson at his storefront for C&O Deli and Seafood on Main Street in Brookville.

Cooper and Olivia Peterson at the front of their father’s deli, as they were the inspiration for the name of the store.

BROOKVILLE — C&O Deli on Main Street has quickly become a staple lunch stop for the town in the months since this unique dining spot first opened its doors, after much anticipation.

Owner Trevor Peterson said he was returning to his roots and what he loves when he was encouraged by his family to take on this new venture.

Peterson grew up in Pittsburgh and worked in restaurants most of his life, enjoying his time in the kitchen most. What started as a summer job continued on through college when he moved to Columbus, Ohio, and even after when he returned to Pittsburgh. He said he did some work in the front end of restaurants too, saying he thinks it’s important to have that experience as well, but he would “much rather be in the kitchen making the food.”

He even met his wife while working in a restaurant in Pittsburgh after moving back home.

His wife, Katie, is originally from the area, and the couple moved to Brookville about 10 years ago. In moving to the area, Trevor Peterson got a job in manufacturing as this was the most prevalent job base in the area. After nearly a decade of this, his wife and in-laws started encouraging him to go back to what he loves.

“For 10 years it just didn’t fit, I was just stuck. It was actually Katie that just said ‘hey, why don’t you do it? You’ve always wanted to do something like it, it’s where you’re happy, why not do it?’ so a year ago we started figuring it out,” Peterson said. “I’m sure she could tell that I was just going through the motions, and my in-laws, they sat me down and said ‘do it, why not?’”

Around October of 2021 Katie and Trevor started the process of finding a location for a restaurant. After just a short time searching, the Petersons found their location on Main Street.

Something important to Trevor Peterson is that his restaurant has a unique identity to anything else in town.

He said he’s always liked the feel of counter service and bringing back the old style of deli to Brookville. Peterson said this appeals to a lot of the younger crowd too, who are more drawn to grab-and-go food and multi-tasking. The response from the community has been better than even he expected.

“...The amount of people that have come in and just thanked us for even putting the idea out there and putting something unique in town is unbelievable. The community has been awesome.

Having his restaurant set up in this style also allowed for more retail space to bring in unique products. He said if he added seating, he wouldn’t have as much opportunity for that side of the business. Peterson said his vision for this was “a small piece of the Strip District in Pittsburgh.”

Peterson said one of the hardest parts of opening the doors was just deciding he was ready and prepared enough to open. His family finally gave him the final push to open the doors for a soft opening in June during the Laurel Festival Parade.

The doors opened with a few of the deli’s core menu items and has only continued to expand since then. Peterson said having a rotating menu and continuing to build on it is a major feature of his restaurant.

“I think that kind of crowd where you can just pick something up, take it home, throw it in the microwave or throw it in the toaster oven and heat it up for your family. It’s easy, it’s something that I think a lot of people would enjoy, and it’s good. We make it fresh every day,” Peterson said.

He also gave credit to his mother-in-law for some of the menu items the public sees each week, calling her a “fantastic cook” and being the one to encourage him to try new dishes, like the pierogi lasagna. The pair will often come up with ideas and try them for the first time during Sunday dinner with the family.

“We’ll do it for Sunday dinner and then you’ll see the same thing here in the deli the next week,” Peterson said.

Peterson said he doesn’t ever want the restaurant to be stagnant, and hopes to keep trying new dishes as long as the business is open.

Having the fresh seafood was also inspired by his family, saying they love to eat it, but it’s hard to find in this area. The store receives fresh shipments about twice a week.

“We’re trying to fill that void that a lot of people hopefully are in the same boat. They want it, but they don’t know where to get it,” Peterson said.

Making sushi was also just a hobby of Peterson’s that his family then encouraged into part of the menu at the deli. He makes the sushi rolls fresh everyday in the kitchen, just like all the other food.

The deli’s Facebook, C&O Deli and Seafood, is the best way to be updated about the specials for the day or what’s available.

“We’ve really enjoyed ourselves. The stress level is obviously higher, but in the same boat, I’m enjoying myself so it’s worth it for sure,” Peterson said.