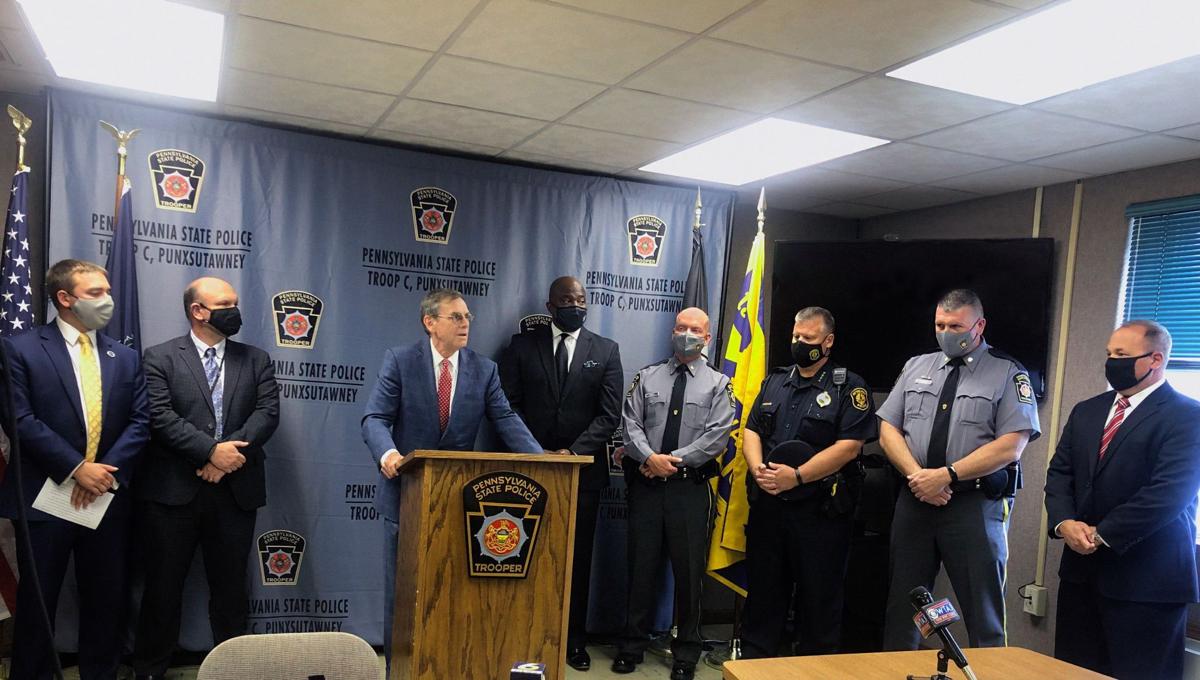 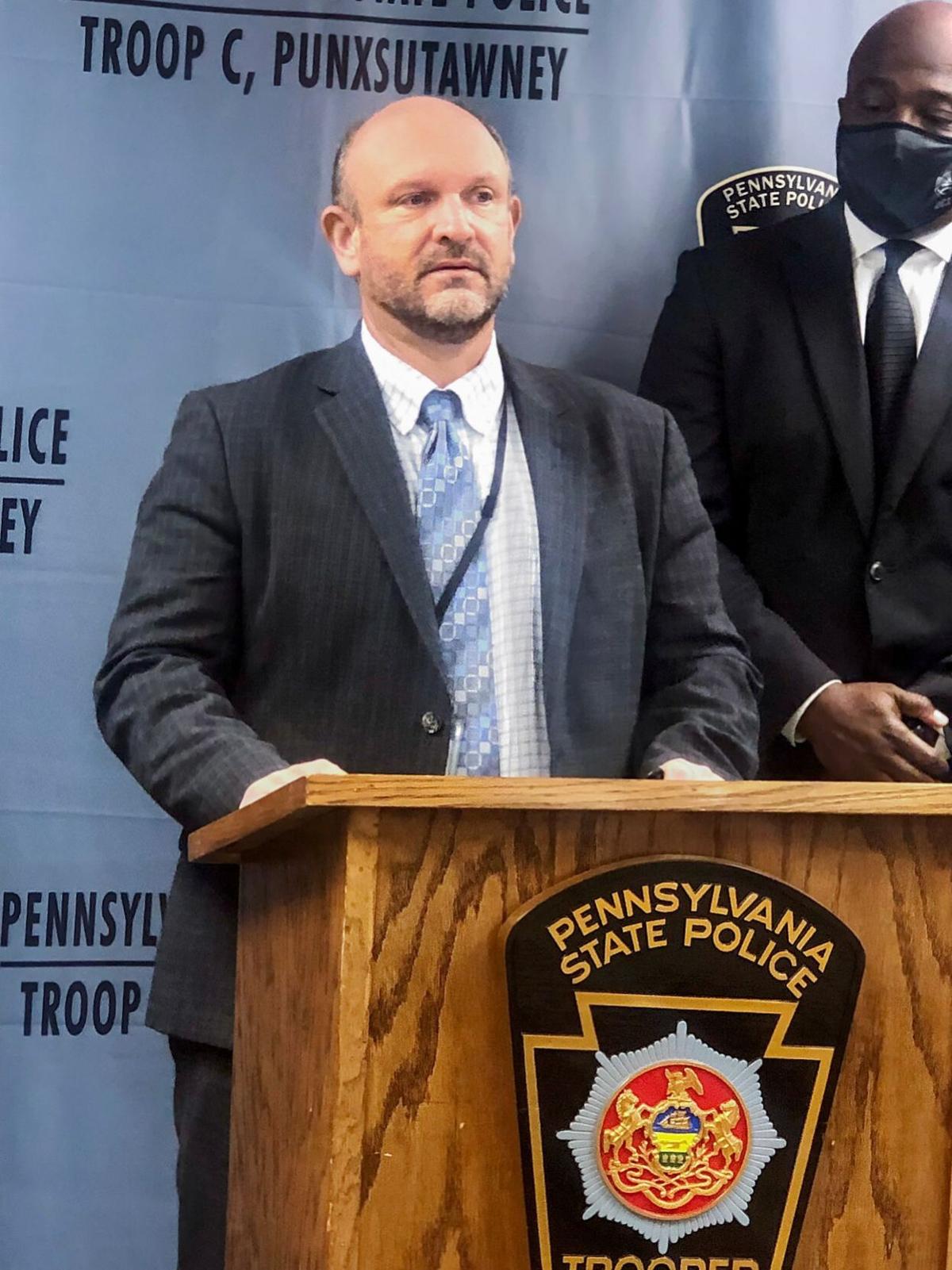 According to authorities, the investigation surrounded a major drug pipeline from California to Pennsylvania.

A news conference was held at the Pennsylvania State Police barracks in Punxsutawney Tuesday afternoon following several arrests in the area.

According to a news release from Kaufman’s office, the first indictment names the following 37 people as defendants:

According to the news release, the named conspirators include leaders, members, drug suppliers, and associates of a drug trafficking organization allegedly responsible for distributing narcotics throughout Western Pennsylvania. According to the indictment, the defendants allegedly conspired to possess with intent to distribute and distributed over 50 grams of methamphetamine, 500 grams of a mixture and substance containing a detectable amount of methamphetamine, 500 grams or more of a mixture containing a detectable amount of cocaine, and a quantity of a mixture and substance containing marijuana from July 2020 through August 2021. The indictment further alleges that several members of the conspiracy conspired to launder the monetary proceeds of the illegal drug trafficking activity. Finally, the indictment alleges individual drug trafficking violations against Morgan Gregory, Jeffery Peters and Christina Shaffer, as well as a firearms violation against Justin Zeruth.

For all defendants, the law provides for a minimum sentence of 10 years imprisonment and up to life, a fine of not more than $10 million or both.

According to the two-count indictment, on or about Oct. 22, 2020, the defendants allegedly conspired to distribute and possessed with intent to distribute more than 5 kilograms of cocaine. The law provides for a minimum sentence of 10 years in prison and up to life, a fine of $10 million or both.

A third indictment names Doug Austen, 40, of Pittsburgh, as the sole defendant. According to the indictment, Austen allegedly possessed with intent to distribute and distributed more than 50 grams of methamphetamine on June 9, 2021. The law provides for a maximum total sentence of not less than 10 years to a maximum of life in prison, a fine not to exceed $10 million or both.

A fourth indictment names Brent Coder, 54, of DuBois, as the sole defendant. According to the indictment, on or about Aug. 19, 2020 Coder allegedly distributed a quantity of methamphetamine and or about Sept. 17, 2020, Coder possessed with intent to more than 500 grams of methamphetamine. The law provides for a minimum sentence of 10 years in prison and up to life in prison, a fine of $10 million or both.

Under the Federal Sentencing Guidelines, the actual sentence imposed would be based upon the seriousness of the offenses and the prior criminal history, if any, of each defendant.

The six indictments, returned by a federal grand jury in Pittsburgh on Aug. 24, 2021, were unsealed Tuesday.

“These indictments show how far reaching and effective the efforts of law enforcement collaboration are in combating drug-traffickers that seek to distribute illegal drugs in our communities,” said Thomas Hodnett, Acting Special Agent in Charge of the Drug Enforcement Administration’s (DEA) Philadelphia Field Division. “I want to thank all of our law enforcement partners that participated in this investigation that netted drug-traffickers operating not only in Pennsylvania but in Oregon, California, Texas, and Ohio as well.”

“I am truly grateful for the hard work and dedication of Acting U.S. Attorney Kaufman, his staff, the Pennsylvania State Police, DuBois City Police Department, the DEA, and other law enforcement agencies for dismantling this network that has been supplying enormous quantities of drugs to Clearfield County and surrounding areas,” said Clearfield County District Attorney Ryan Sayers. “Organizing and executing an operation of this magnitude across multiple states and jurisdiction is no simple task, but it is worth it to protect our friends and neighbors from these drugs that plague our communities. Operations like this one and Crystal Highway, which occurred last year, send a clear message to drug traffickers — that Clearfield County is closed for their business.”

Sayers especially thanked the City of DuBois Police Department and the Pennsylvania State Police, noting that, “They got this investigation started and saw it through to the end.”

“An operation like this stops drug traffickers and helps cut the supply chain that would help slow some of the suffering and death in our local area,” said Sayers. “And this tails into the drug treatment court that we’re trying to start in Clearfield County and the LETI program, which we recently started. If we cut off the supply through operations like this and work with individuals that are users and addicts to address the demand, these two things should help our county and communities cut down on substance abuse crimes. It is not an overnight fix, but it is a start. And we know that new criminals and drug traffickers will try to fill the void created by the arrests today. However, I have no doubt that the men and women of the Thin Blue Line stand ready and willing to combat these threats in the future.”

“Today is the culmination of a major drug investigation that involved many state and federal agencies working hand-in-hand to protect the citizens of Jefferson County,” said Jefferson County District Attorney Jeff Burkett. “I commend, applaud and thank the DEA, the Pennsylvania State Police, Acting U.S. Attorney Stephen Kaufman and his office and the many other law enforcement agencies that spearheaded this important effort. It is very gratifying to see so many agencies working so hard together for such a great cause.”

“Meth addiction ruins lives,” said Burkett. “It ruins families. It ruins everything around it. It has a terrible human cost. And that’s why it’s incredibly heartening when I see major traffickers of this terrible poison be brought down and today we see that the combination of a great effort.”

Kaufman also recognized the U.S. Attorney’s Office for the Eastern District of California, under the leadership of Acting U.S. Attorney Phillip A. Talbert, for their assistance with the investigation and handling of initial proceedings in their District.

Assistant United States Attorneys Jonathan D. Lusty and Michael R. Ball are prosecuting this case on behalf of the government.

An indictment is an accusation. A defendant is presumed innocent unless and until proven guilty.