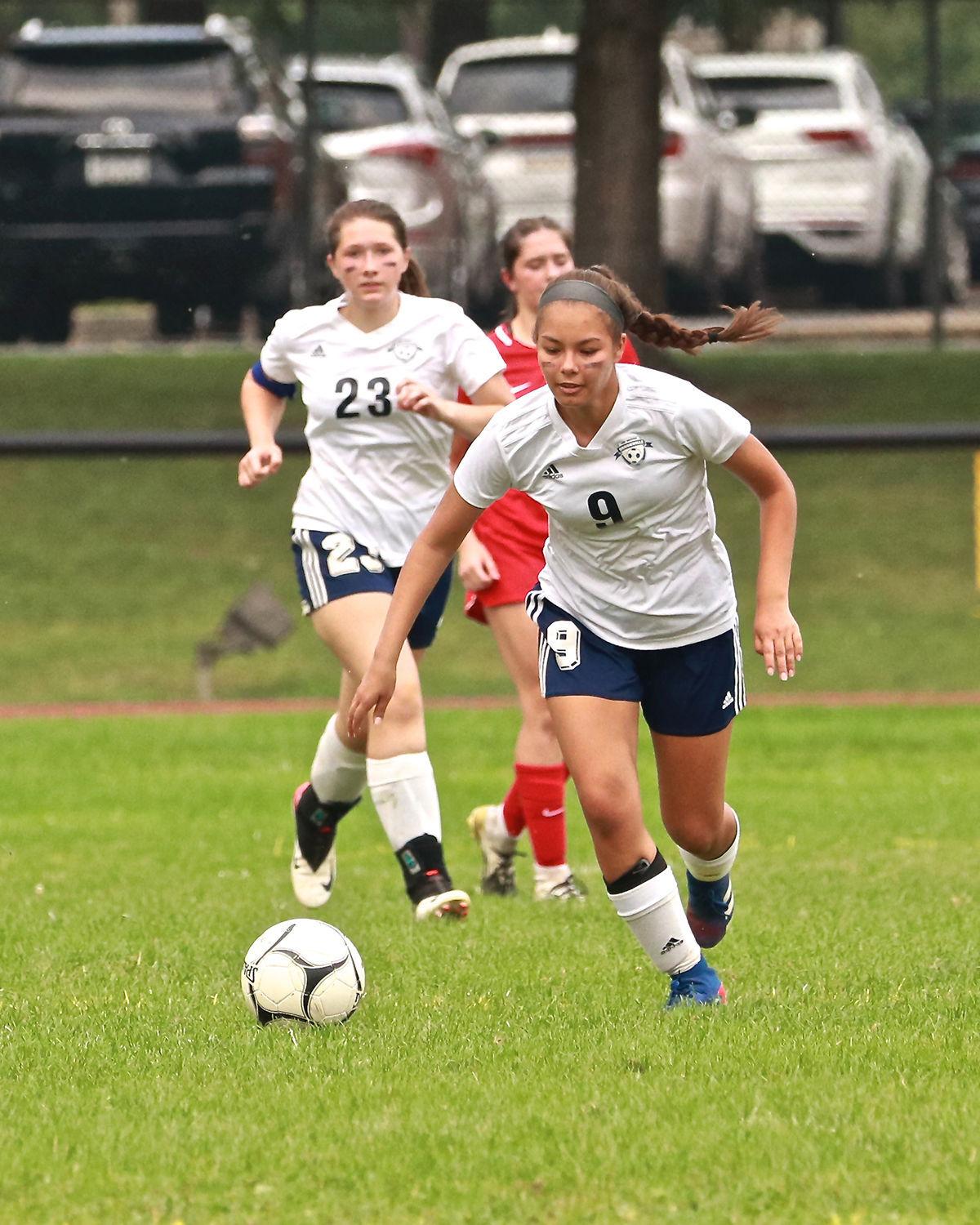 Brookville’s Jazmines Sarvey-Vasquez chases down the ball during Monday’s game at Redbank Valley. Looking on is teammate Elisa Molnar (23). Sarvey-Vasquez scored one of the Lady Raiders’ two goals in a 2-1 win over the defending D9 Class 1A champions. 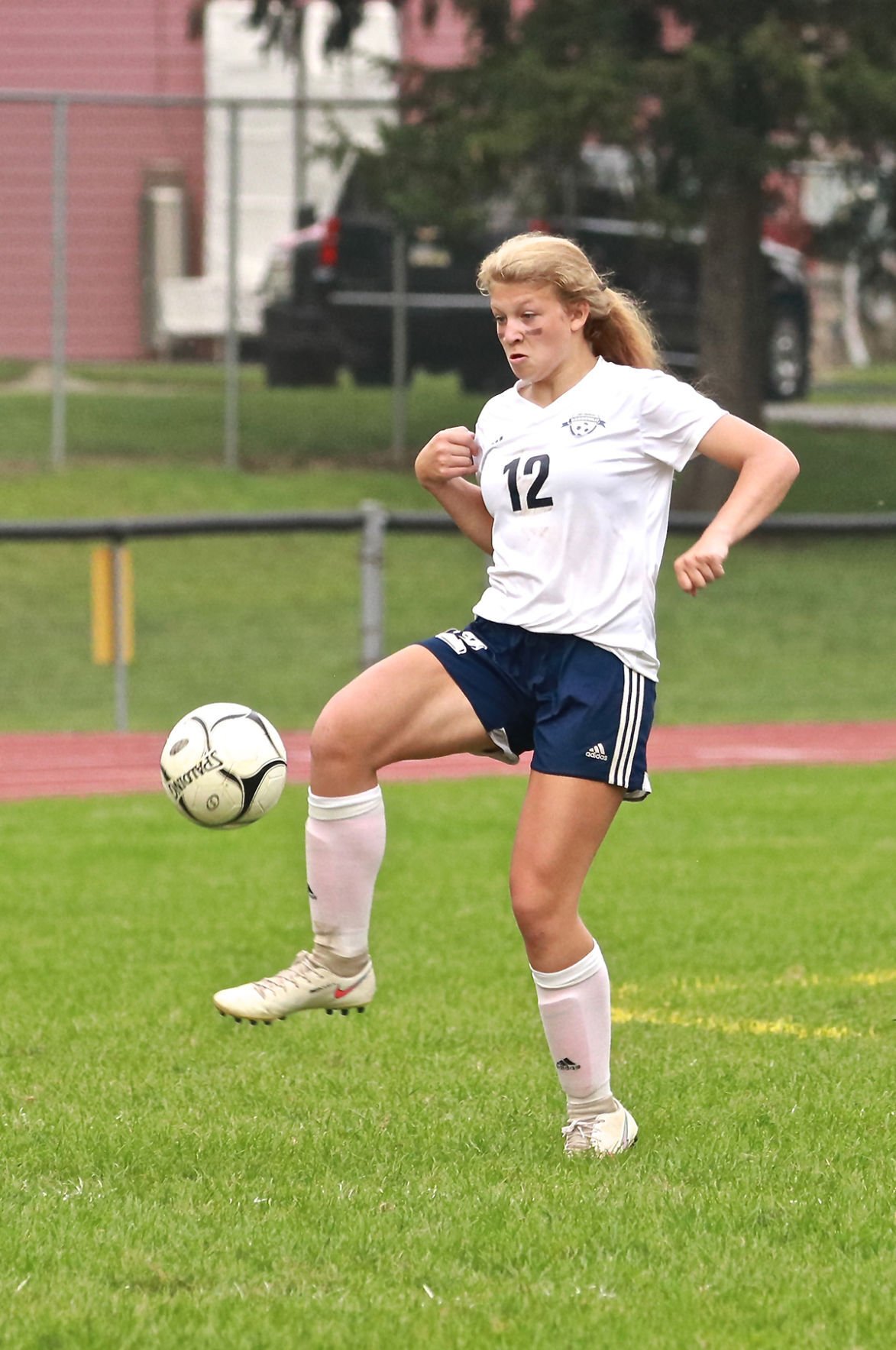 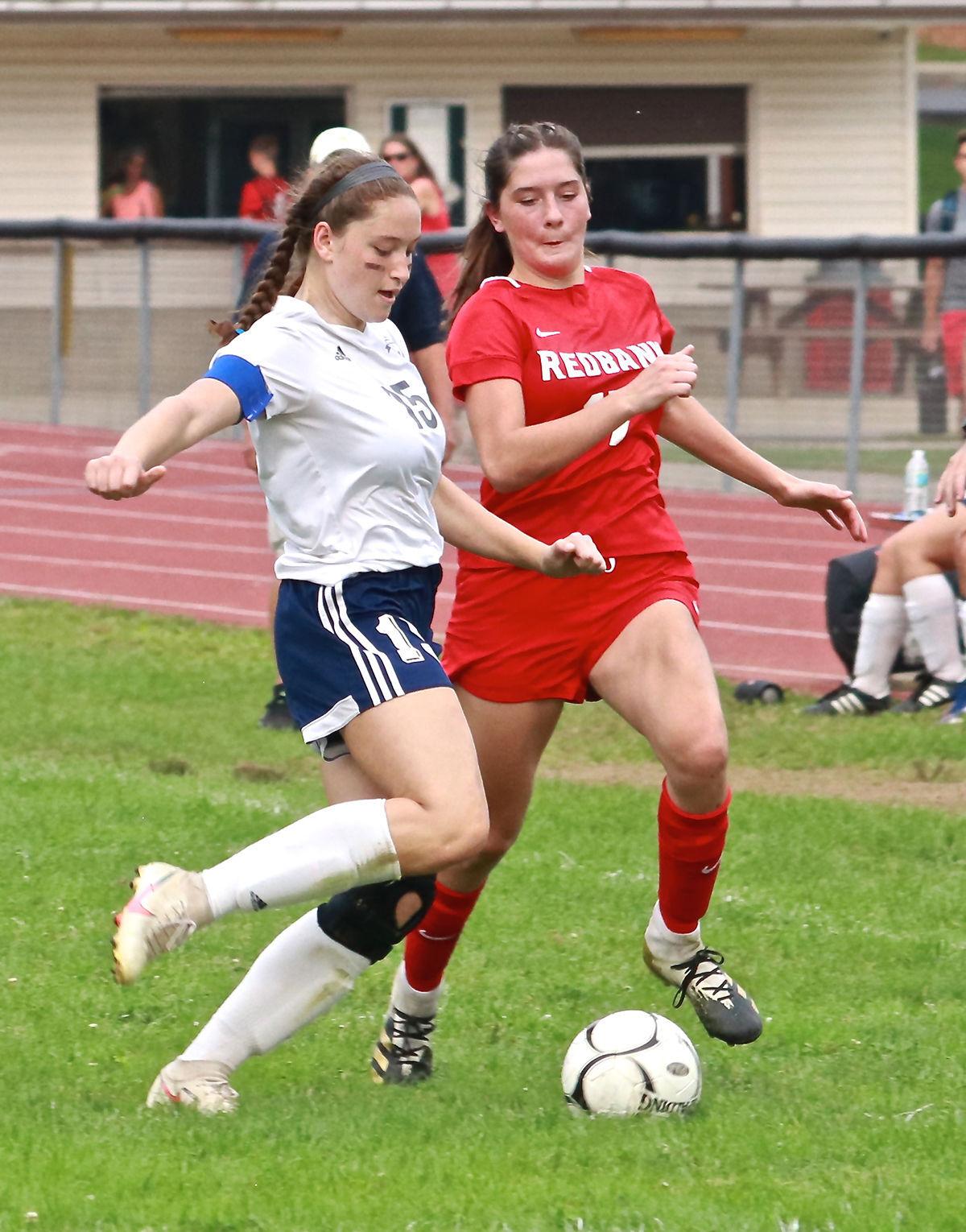 Brookville’s Jazmines Sarvey-Vasquez chases down the ball during Monday’s game at Redbank Valley. Looking on is teammate Elisa Molnar (23). Sarvey-Vasquez scored one of the Lady Raiders’ two goals in a 2-1 win over the defending D9 Class 1A champions.

NEW BETHLEHEM — Scoring twice in the first half and holding off the District 9 Class 1A champions, the Brookville Lady Raiders soccer team notched its first win of the year in a 2-1 nail-biter at Redbank Valley Monday.

The Lady Raiders (1-3) were able to get a 2-0 lead thanks to goals from Jazmines Sarvey-Vasquez and Autumn Walter in the first half, Walter’s goal was assisted by Alayna Haight.

From there, it was a defensive effort backed up by junior goalkeeper Breanna McKendree who was making her first start in the net.

“We’ve been working hard the last few games and I think without having Jordan (Cook) at goalkeeper, we were going in a little unsure, but Breanna really stepped up and had a great game for us,” Lady Raiders head coach Kaitlyn Hill said. “I think our defense really worked hard tonight and we had to move some girls around, but we made it work and they definitely earned it.”

The Lady Raiders started with a 5-3 loss to Clarion, then dropped a 1-0 game at Brockway before last Saturday 7-0 loss at home to Clearfield after trailing only 1-0 at halftime.

“The girls know they’re capable of working hard and getting wins and it’s just a matter of doing it and we finally did today,” Hill said.

Redbank Valley, which fell to 2-2, scored with under five minutes left in regulation on Alexandra Shoemaker’s goal off an Ember Hetrick assist.

In Monday’s other game:

At Karns City, the visiting Lions fell to the hosts who scored twice within quick span of five minutes to build a 3-0 lead before the Lions scored later in the second half.

Brandon Slater, Myles McCully and Colson Ritzert scored for the Gremlins, who dropped the Lions to 1-1.

Wyatt Borden scored for the Lions, who were scheduled to host Keystone Wednesday and visit Redbank Valley Thursday.