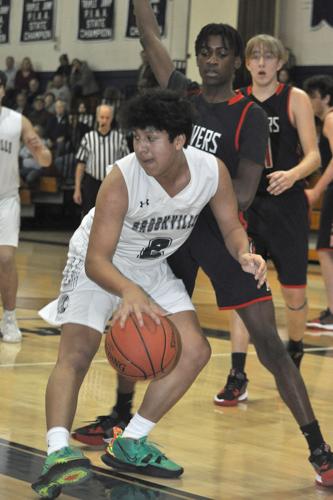 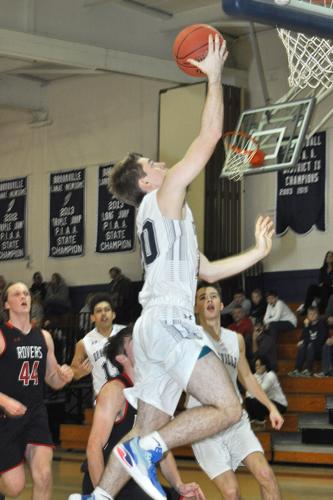 Brookville’s Jamison Rhoades goes in for a layup during Friday night’s game against Brockway. Rhoades was one of 13 players to score in the Raiders’ 60-21 win over the Rovers.

Brookville’s Jamison Rhoades goes in for a layup during Friday night’s game against Brockway. Rhoades was one of 13 players to score in the Raiders’ 60-21 win over the Rovers.

That’s what the agenda was for his Raiders going into last week’s home games with West Branch on Wednesday and Brockway on Friday night.

And Park, who coached his Raiders to the PIAA Class AAA state final, likes what he saw in the two wins. After Wednesday’s 63-32 win over West Branch, the Raiders routed the visiting Rovers 60-21.

But Park is looking to be ready for the big run at the end regardless of record. The Raiders were scheduled to visit Punxsutawney Wednesday, host St. Marys for Senior Night Friday and then travel for a Saturday afternoon game at DuBois in a makeup that begins with junior varsity at around noon.

Monday, the Raiders travel to Johnsonburg.

“We were 10-0 going into the week and didn’t feel the kids have been playing to their potential,” Park said after the rout of the Rovers. “They’ve been playing well at times, just not solid and what they can do. I know that’s being greedy, but I know what these kids are capable of and we’re not playing to that level.

“I didn’t feel like we were playing hard like our brand of basketball, so I divided them into two groups with our depth and each group was going to get four minutes with six kids on each and if someone jogged through the middle or down the floor or if was an effort thing … you were coming out and the next guy was coming in. And I’ll tell you what, I thought we played some really good basketball this week. I’m very pleased with the week.”

And he’ll continue to look seriously at his shift work moving forward.

“We’re good, but other teams are really good too,” Park said. “If we would face a team like Ellwood City (WPIAL champion from last year the Raiders beat in the quarterfinals), we want to be ready. We can’t take plays off, five guys all the time. That’s what we were shooting for this week.”

The Raiders led the Rovers 15-0 after the first quarter and Brockway ended the drought with a Alex Carlson free throw nine seconds in the second quarter. His 3-pointer at the 6:55 mark was the Rovers’ first field goal of the game.

The Raiders led 36-7 by halftime, outscoring the Rovers 21-7 in the second quarter, then reached the PIAA Mercy Rule’s running clock at 40-9 when Griffin Ruhlman completed a three-point play with 5:55 left in the third quarter.

Ruhlman and sophomore Jack Pete each scored nine points to lead an obviously balanced scoring charge with 13 of the 16 Raiders who got into the game finding the scoring column. Clayton Cook finished with seven points and six rebounds, Hunter Geer scored six points.

Dylen Coder led the Rovers with 10 points off the bench, eight of them coming in the fourth quarter.

The Rovers had starter Jared Marchiori ejected from the game in the third quarter during a scramble for a loose ball. By PIAA rule, was suspended for the next two games.

The Raiders’ junior varsity team stayed unbeaten with a 43-15 victory as Jack Knapp and Brad Fiscus scored 11 and 10 points apiece.

In last week’s other game:

At home against West Branch of District 6, the Raiders put 10 players in the scoring column.

The Raiders led 28-14 at halftime, extended their lead to 42-24 after three quarters, then pushed it into PIAA Mercy Rule running clock territory with a 21-8 fourth-quarter advantage.

The Raiders outrebounded the Warriors, 47-25, with 19 offensive rebounds that led to a whopping 20-1 advantage in second-chance points.

Griffin Ruhlman scored 10 of his team-high 12 points in the second half to go along with eight rebounds and two steals. Ian Pete scored nine points and grabbed six rebounds with three assists. Jack Pete scored eight points, and Danny Lauer and Clayton Cook with seven apiece.

Cook pulled down a team-high 10 rebounds and dished out three assists.

ADMINISTRATOR’S NOTICE Letters of Administration in the Estate of Adam

NOTICE The Rimersburg Borough preliminary budget for the fiscal year