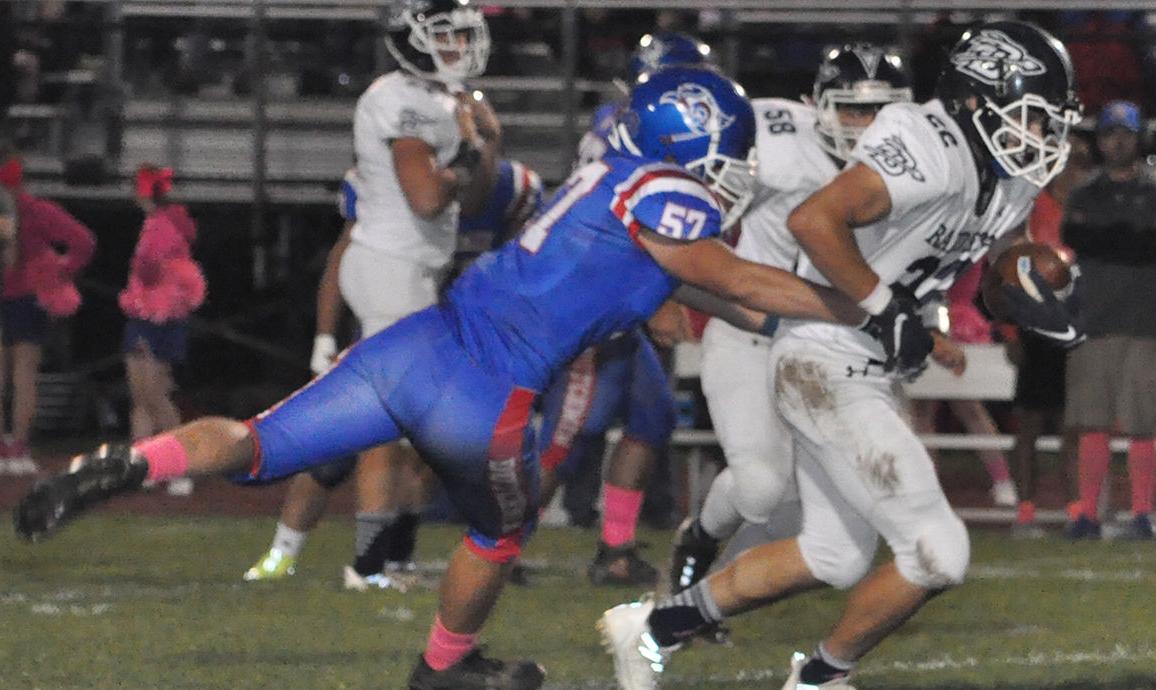 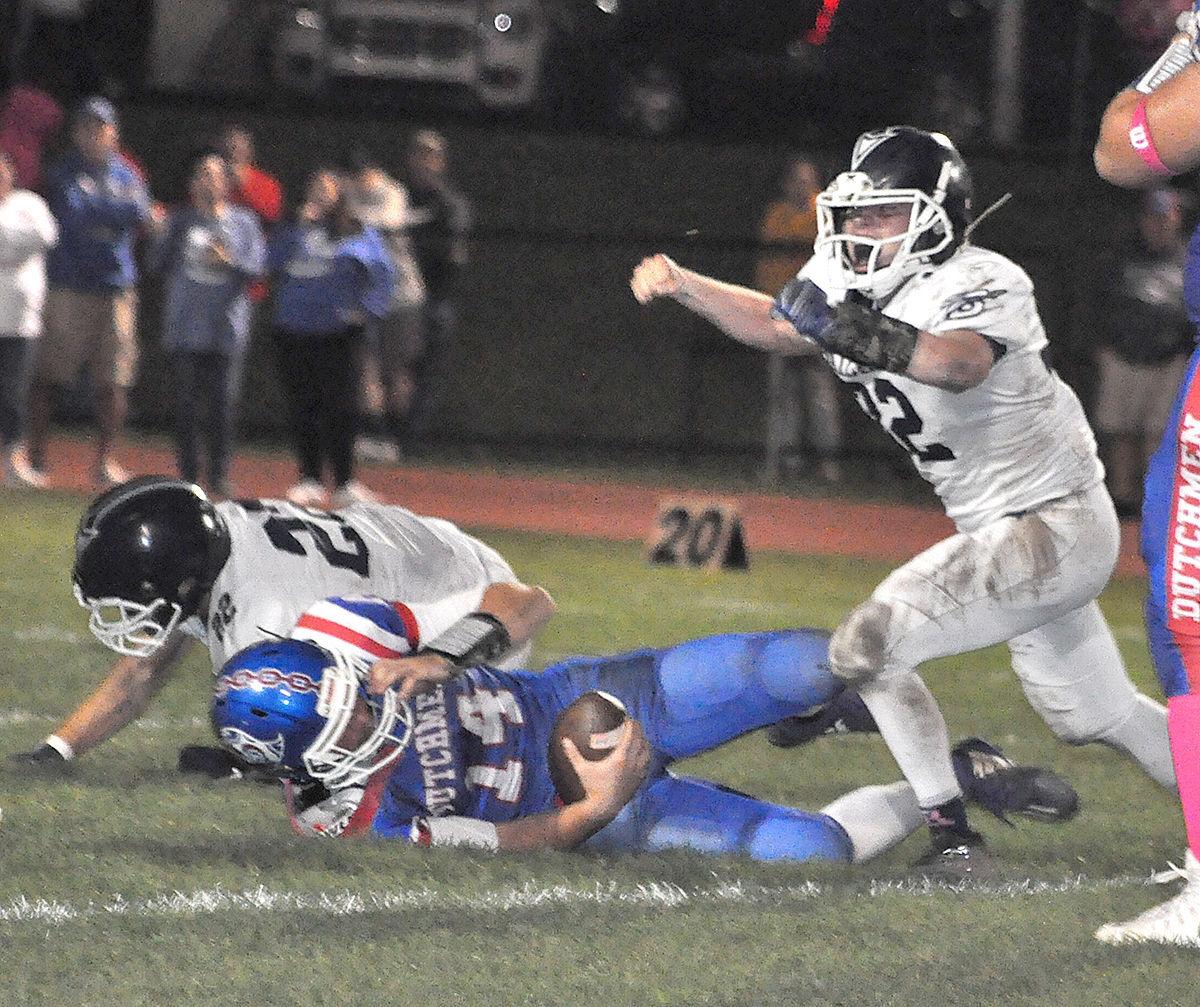 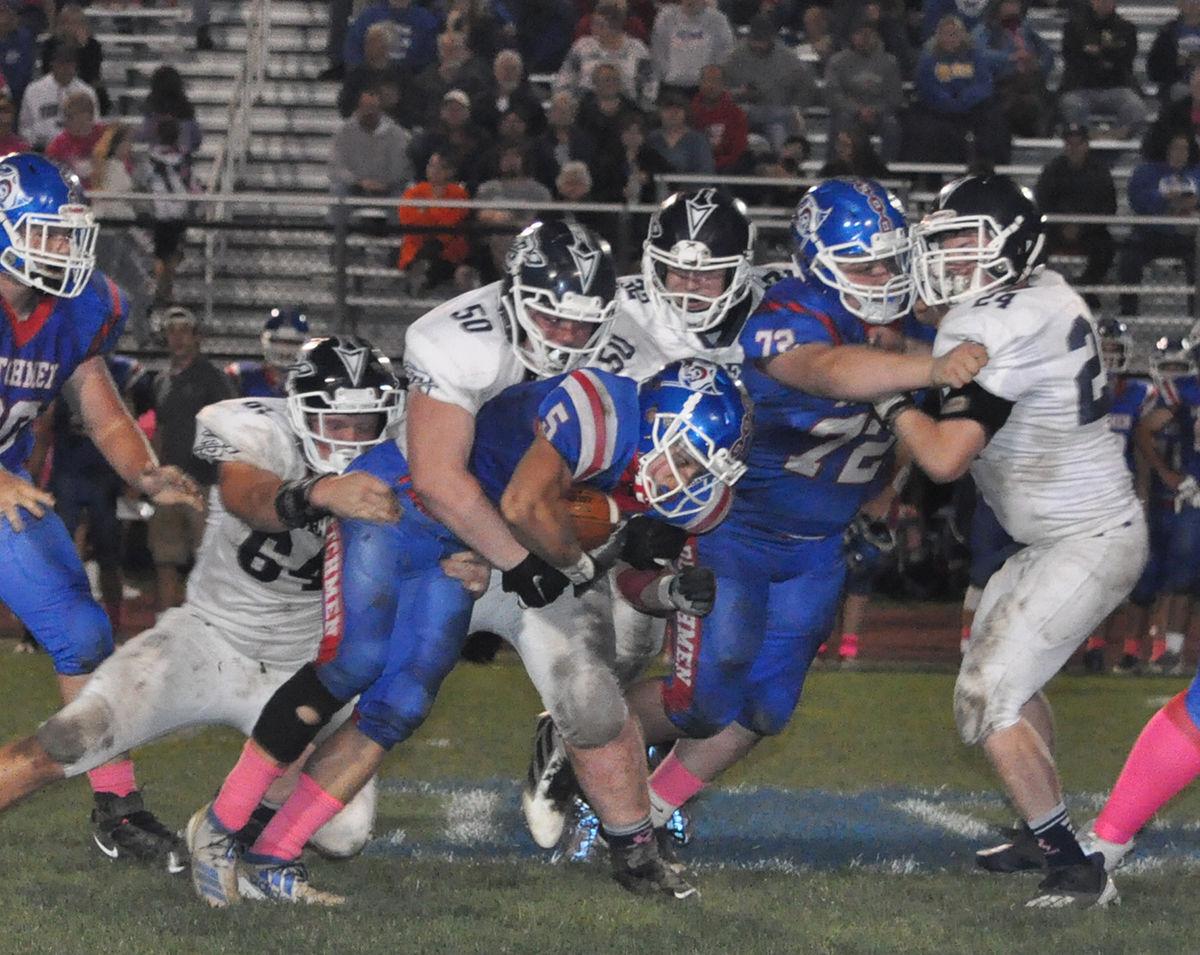 Brookville’s Jake Becker (50) brings down St. Marys running back Matthew Davis (5) with Hunter Smith (64), Carson Weaver (back) and Bryce Weaver (right) also in on the play during last Friday’s game.

Brookville’s Jake Becker (50) brings down St. Marys running back Matthew Davis (5) with Hunter Smith (64), Carson Weaver (back) and Bryce Weaver (right) also in on the play during last Friday’s game.

ST. MARYS — As rough as it started, the finish was almost as good as could’ve been.

However, the Brookville Raiders’ quick 19-0 deficit was too big of a hole to climb out of in last Friday’s 19-14 loss to St. Marys at Dutch Country Stadium.

St. Marys scored all of its points by the 8:13 mark of the second quarter, allowing the Raiders to slowly climb back into the game with two second-half scores. And the Raiders had the ball at the end, reaching the Dutch 39 before Charlie Krug’s pass inside the 10 was intercepted by Carter Chadsey with 39.1 seconds left in the game.

While the Dutch were able to exhale and later on realize they owned first place by themselves in the District 9 Large School Division thanks to Ridgway’s 33-14 loss to Central Clarion, the Raiders did leave the field somewhat satisfied with how they responded to first-half adversity.

“I’m so proud of those guys,” said Raiders head coach Scott Park, whose team dropped to 5-2. “Not a lot went right for us in the first half and I thought we moved the ball well, but just couldn’t capitalize on anything. The adjustments the coaches made at halftime were great moves, people playing positions they hadn’t before … It was a lot of good things. I told them at halftime, this could go two ways. It could be a close game or a repeat of Karns City. I thought they played great. I’m happy with the way we challenged them in the second half.

“We held St. Marys’ offense to 14 points. If you can do that against them, you’re doing something.”

St. Marys had just beaten Karns City in a fantastic finish the week before while the Raiders lost to the Gremlins, 41-7, the week before that. It’s the sixth straight win for former longtime Raiders coach Chris Dworek, whose team opened with a loss to Ridgway.

“We’re still not in the driver’s seat, but (winning the league) is one of our goals and even after the first week, the kids felt that our goals were all still intact and have worked super-hard,” Dworek said of his 6-1 Dutch. “We beat adversity tonight. We beat a good, tough team in Brookville tonight. Our guys didn’t panic.”

Dworek said that before the Karns City result was official, but the Dutch are in the driver’s seat. Win at 1-5 Moniteau this Friday and beat 3-4 Kane at home in their league finale in two weeks and the Large School title lands in St. Marys.

Early on, the Dutch could do little wrong, scoring all of their points by the 8:13 mark of the second quarter for a quick 19-0 lead. A strong pass rush that led to seven sacks of Raiders sophomore quarterback Charlie Krug, five in the first half.

Alex Lukaschunis had at least four of those sacks, including one that forced a fumble that teammate Eli Rippey picked up and ran 55 yards to the end zone for a 13-0 lead with 2:37 left in the first quarter.

St. Marys quarterback Christian Coudriet had a hand in the Dutch’s other two touchdowns, running one in from one yard to cap their first possession of the game and then hitting Chadsey for a 35-yard TD pass on a fourth-and-24 play to make it 19-0.

Coudriet threw for most of 332 yards in the first half — 194 on 11-of-13 passing — while completing 22 of 31 for the game. His junior brother Charlie had seven catches for 129 yards while Chadsey finished with five catches for 81 yards with a game-sealing interception late in the fourth quarter.

But as much as the Dutch dominated, they left a crack in the door for the Raiders who were able to keep St. Marys out of the end zone on a fourth down pass from the Raiders’ 4 as time in the first half expired.

That late Dutch drive came off a frustrating end to a Raiders possession stopped with a fumbled snap on a fourth-and-one play at the Dutch 21. On first-and-10 from the Dutch 30 two plays before that — yes two — as Krug was getting sacked by Waylon Wehler he threw the ball away and was flagged for intentional grounding.

The rule is a spot foul with five yards tacked on with a loss of the down as well. Instead, it was a loss of two downs as it went to third-and-25. A Krug 24-yard pass to Truman Sharp got them within a yard of a first down before the fumbled snap.

The Raiders, who had all four of their first-half drives end in Dutch territory, did get back into the game. It may have started by denying another scoring chance for St. Marys when a Coudriet to Coudriet pass appeared headed for a 50-yard TD, but Raiders defensive back Noah Peterson punched the ball out of Charlie Coudriet’s hands before he crossed the goal line and the ball went out of the end zone for a touchback, giving the Raiders the ball with 5:48 left in the third quarter.

While the Raiders didn’t turn that turnover into points, they forced a Dutch punt that set them up at their own 31. On the second play, Krug, who managed to stick in the pocket most of the night and make plays with his arm or legs despite the sacks, found Peterson for a 66-yard touchdown pass with 1:17 left in third.

Krug completed 18 of 32 passes for 262 yards with Peterson catching five passes for 131 yards.

“That’s what happens when you take that extra half-second in the pocket until people get open and if they don’t get open, then your (running) lanes are there,” Park said. “He’s going to be fine. He took some shots, but that’s what you need to be able to do.”

Another forced Dutch punt and the Raiders scored again, going 54 yards on seven plays with Krug scrambling out of the pocket for a 13-yard TD run to set what was actually the final score with 9:11 remaining in the game.

Again, the Dutch had a chance to put the game away by taking the ensuing possession from their own 31 to the Raiders’ 4 before stalling on downs with 2:30 left. Chadsey’s eventual interception allowed the Dutch to kneel out two plays to run out the clock.

“We have not won pretty all year, so we’re used to that feeling and the kids did not quit or panic and it’s been the same story for five or five of our six wins like that,” said Dworek, who beat his former team after losing to the Raiders in the first matchup in 2019.

“That was nerve-racking at the end because we knew who they were trying to get the ball to (with Kunselman) and (Peterson) is a good receiver too,” Dworek added.

Park was impressed with his team’s second-half performance, especially considering what happened in the first half.

“I told these guys that might be the best half of football I’ve seen since we’ve been here,” Park said. “When you take how the first half was going to come out and switch that tone, I mean, that was huge.”