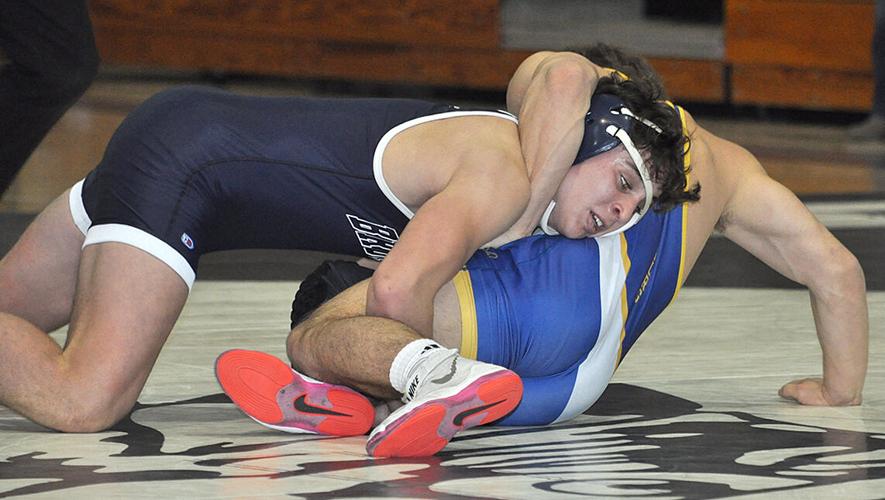 Brookville’s Easton Belfiore finishes off a takedown of Johnsonburg’s Kaden Dennis during their regular-season meeting last year. Belfiore finished 25-16 after qualifying for states as a freshman. 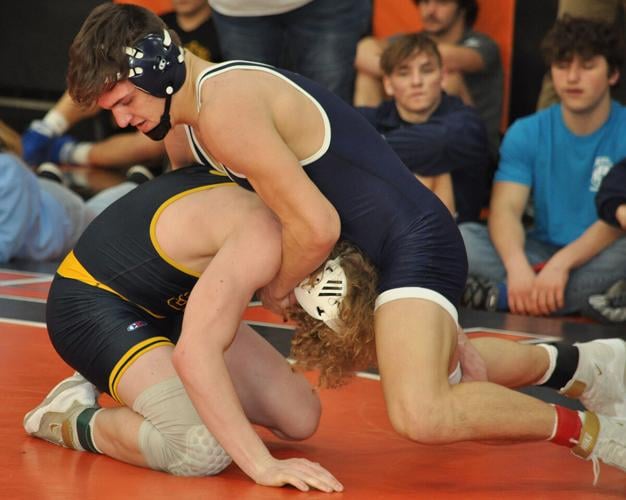 Brookville’s Jackson Zimmerman counters a shot taken by Saegertown’s Landon Caldwell during their third-place bout at 189 pounds at regionals last year. Zimmerman finished 24-7 after his first trip to states. 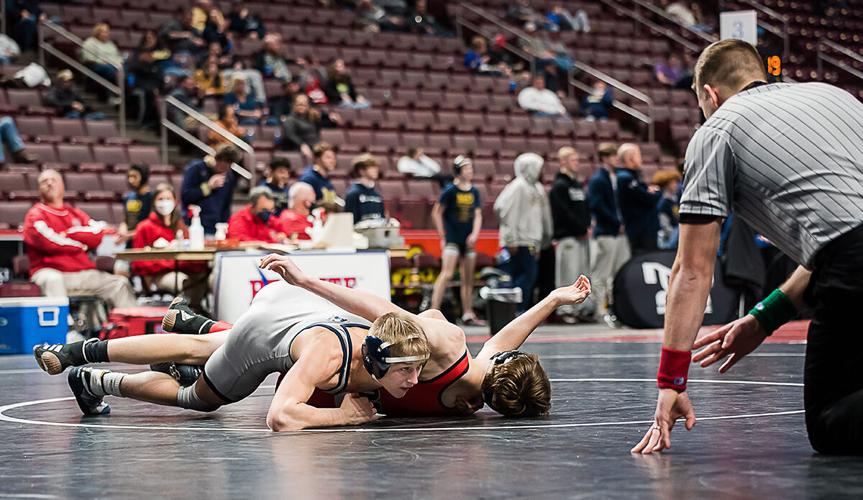 Brookville’s Cole Householder looks to pin Lackawanna Trail’s Garet Fowler during their 120-pound bout at the PIAA Dual Championships. Householder medaled as a freshman, finishing seventh while notching a 37-10 record.

Brookville’s Easton Belfiore finishes off a takedown of Johnsonburg’s Kaden Dennis during their regular-season meeting last year. Belfiore finished 25-16 after qualifying for states as a freshman.

Brookville’s Jackson Zimmerman counters a shot taken by Saegertown’s Landon Caldwell during their third-place bout at 189 pounds at regionals last year. Zimmerman finished 24-7 after his first trip to states.

Brookville’s Cole Householder looks to pin Lackawanna Trail’s Garet Fowler during their 120-pound bout at the PIAA Dual Championships. Householder medaled as a freshman, finishing seventh while notching a 37-10 record.

It’s season 19 for Raiders head coach Dave Klepfer, who won his 300th dual meet in the final match last year. It’s been quite a run for the team over the past 12 seasons — 10 D9 Class 2A dual meet and tournament titles with 53 individual D9 titles.

The Raiders have won 91 straight matches on the mat against D9 foes and while they may be the team to beat among the district Class 2A, it’ll largely depend on how the Raiders fill in their lineup around returning state qualifiers in senior Jackson Zimmerman, and sophomores Cole Householder and Easton Belfiore.

The additions of Clearfield and St. Marys to the Class 2A ranks — they’ve bumped down from their traditional spots in Class 3A — won’t make it any easier for the Raiders to continue their dominance at the team level.

“I think if we get everyone in the right weight classes and we’re healthy, we’re certainly competitive enough to be in the hunt for a district title,” said Klepfer. “And that’s our goal every year. It’s going to be a whole different animal this year with Clearfield and St. Marys thrown into the mix and they bring talented kids every year.

“But it’ll be exciting … We have some guys who have never had their moment on the mat yet in a Brookville singlet and this will be the first year they’ll get to do that and I’m excited to see some of them because there are some talented kids out there waiting to be seen and noticed.”

Householder had an outstanding varsity debut as a freshman, winning a seventh-place state medal at 120 pounds, finishing 37-10. He won the team’s first-ever regional title as a freshman while taking the district title.

“He’s one of our most dedicated guys and he has very high goals from himself, coming off a seventh at states as a freshman,” Klepfer said. “He put in a very extensive offseason of training and competing and he’s going to probably start around the 133-pound range and we’ll see from there.”

Belfiore also made a big impact as a freshman, going 25-16 after finishing second at districts at 172 pounds. He made it to states with a fourth-place finish at regionals.

“He was at a man’s weight last year and he put together a pretty fantastic season,” Klepfer said. “He got two trips to the Giant Center last year and that’s big and he’s another one coming off an injury from football and trying to get back as close to 100 percent as he can, so it’ll be a little slow in the early going as far as competing, but he’ll probably start at 189 and work his way down to 172.

Zimmerman finished 24-7 at 189 pounds where he finished second at districts and third at regionals to punch his first ticket to states. He’ll likely start the year at 215 before working back down to 189 for the postseason.

“Two of the guys on the podium in Hershey Jackson beat in previous weeks, so it’s one of those things we talk about down there is that you have to put in three days in a row and he’s looking to make that jump,” Klepfer said. “He’s looking to wrestle in college, so this is a big year for him. He’s battled injuries throughout his career and he’s kind of battling one now, but he’s a senior and has one crack at it.”

The other regulars back are senior Coyha Brown, juniors Chris Carroll, Jared Popson and senior Brecken Cieleski. Brown finished 16-10 after placing third at 160 pounds at districts to qualify for regionals. Carroll was 14-15 wrestling mostly at 106 pounds. Popson (29-15) finished third at districts and fifth at regionals while Cieleski was 24-13, qualifying for regionals with a third-place finish.

The Raiders won’t have returning two-time D9 champion and two-time state qualifier Brayden Kunselman and regional qualifier Carson Weaver, both seniors who elected to not go out for the team.

The Raiders won’t have a 107-pounder at the start with Carroll likely at 114 with Popson, junior Antonio Thornton and sophomore Owen Fleming working in the spots at 121 and 127.

“We’re expecting big things from Jared and he’s one of those kids who needs to make a jump and get down to Hershey. He was so close last year,” Klepfer said. “Antonio has put in a lot of time in the offseason and showing a lot of progress and I’m excited to see Owen get back after missing most of last year with an injury. I think he’ll surprise some people this year.”

With Householder likely going at 133, it’ll be sophomore newcomer Tony Ceriani landing at 138.

Cieleski will probably be at 145 at the start. “Coyha, Brecken and Cole put in the most offseason work and Brecken is wrestling with a ton of confidence,” Klepfer said. “He’s improved in all positions and I think he’ll really turn some heads.”

Junior Burke Fleming (3-9) looks to be at the 152 spot at the start and Klepfer is looking forward to seeing his progress after what wasn’t as light of a season last year as the record indicates.

“I think he won two JV tournaments and probably wrestled as many bouts as a varsity starter did last year, probably 30 bouts so he got a lot of experience and made some nice improvements,” Klepfer said. “He’s one of the new faces we’ll see in the lineup where it’s going to be exciting to see how he performs.”

Brown’s offseason work impressed Klepfer, who will probably slot him at 160.

“I’m quite positive nobody did more work than Cohya in the offseason,” Klepfer said. “He wrestled I’ll be 80 bouts since regionals with freestyle and some offseason tournaments. He really put the work in and he’s down to weight early in the season. In other seasons, he had to take time to work down. He’s ready to rock and he’s excited for his senior year.”

Sophomore Kolton Griffin (3-3) looks to slot into the 172 spot at least early on. He saw limited varsity action last year.

“He got his feet wet a little at the varsity level and got a lot of JV experience and he’s extremely strong and he’s going to be a guy that’ll be shifting down as the season goes along,” Klepfer said. “If he can wrestle six minutes like he goes the first two, he could do some big things in this sport.”

Belfiore and Zimmerman will bridge the lineup to heavyweight where senior Baily Miller returns after missing most of last year with an injury following a 7-7 start. Other heavies such as senior Caden Marshall, junior Danny Drake, and sophomores Lance Spencer and Jacob Clinger give the team depth up top.

Sophomore Brooke Monrean will compete in the girls’ division during the season in the 170-pound division, likely seeing female foes at the King of the Mountain Tournament and the Mid-Winter Mayhem. Klepfer likes what he’s seen from her as well.

“She put in a lot of freestyle work, she never misses, and she came to every preseason workout so she wants to be good even though she got a late start,” Klepfer said.

The Raiders have four home duals outside of their annual Ultimate Duals event on Jan. 21, starting with Tuesday’s matchup with Brockway after this weekend’s trip to the Sheetz Kickoff Classic in Greenville.

16-17-at King of the Mountain Tournament, Central Mountain H.S., TBA

Use ItchNoMore® shampoo on dogs, cats & horses to relieve