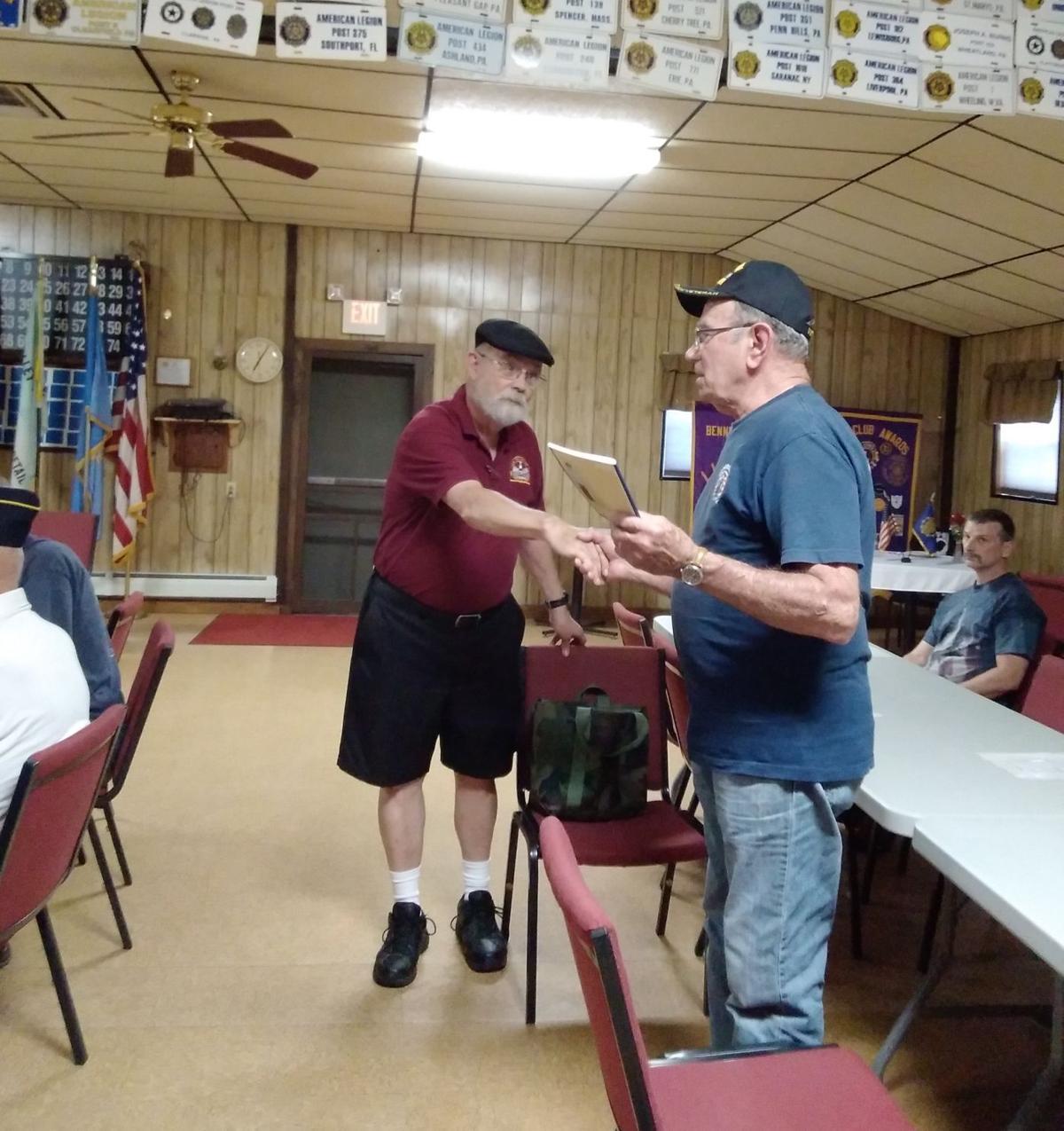 WEEDVILLE — A book written about a Benezette man and World War II soldier was recently presented to his family by the Mt. Zion Historical Society of Weedville.

Jim Burke, president of the MZHS, said “Clark Ingram, Prisoner of War” was written about Benezette native Clark Ingram, who was a businessman in the Elk County area all of his life and member of the American Legion #978 in the valley.

Burke said Ingram's B-25 plane crashed in the northern part of Italy. He was also in the German Death March during the Holocaust and was a survivor.

Clark Ingram ran a general store in Weedville for many years, said Burke.

The book was written by Ingram's granddaughter, Leigh Ingram O'Brien, and edited by members of the MZHS, said Burke, creating a map that traced his journey from stalag (prisoner of war camp) to stalag.

The book was presented to Clark Ingram's son, Mark Ingram, by the MZHS on June 24 at the regular monthly meeting of the American Legion #978.

The historical society, which has about nine members, and its board does a lot of work in the community, such as maintaining a military park on Mt. Zion Road — Mt. Zion Historical Park, said Burke, located at the site of the oldest protestant church in Elk County, which was built in 1958 but destroyed by a fire in 1976.

There are more than 600 plaques honoring veterans, as well as a Civil War monument and a veterans and citizens' walkway, according to the MZHS website. The park is also supported by local organizations such as the American Legion, Boy Scouts, Vietnam Veterans of America and churches, the website says.

Anyone who has been a member of the American Legion for more than 10 years is able to purchase a plaque, as well as Vietnam veterans, said Burke. The MZHS also hosts a party for Vietnam veterans each year around the month of September.

The MZHS is also responsible for installing a memorial at Mt. Zion Historical Park, a $30,000 project. People are also able to purchase memorial benches to be installed there, said Burke, and the Ingram family did so.

Mark Ingram was very appreciative of the efforts of the MZHS, said Burke. The family was “very pleased” when Burke sent them the final copy of the book.

“It was nice to work with the Ingram family,” said Burke.

Ten books were also given out, free of charge, he noted.

“We want to recognize that there is so much the people of World War II contributed to our country,” Burke says.

The book, a fundraiser for the MZHS, is currently available at Valley Farm Market and Bennetts Valley Pharmacy in Weedville. Southside Pickers of DuBois will also be carrying copies.

The historical society is also known for other books it sells, including the 30-year-project on Dents Run gold, “The Legend of the Dents Run Lost Gold Shipment,” as well as “Elk County Bucktails,” “Heroes of Air Power” and “Pioneers of Second Fork.”

Members of the MZHS also make their way around to events, such as a giving a presentation about Elk County Bucktail rifles at the Sinnemahoning Sportsmen's Club recently, said Burke.