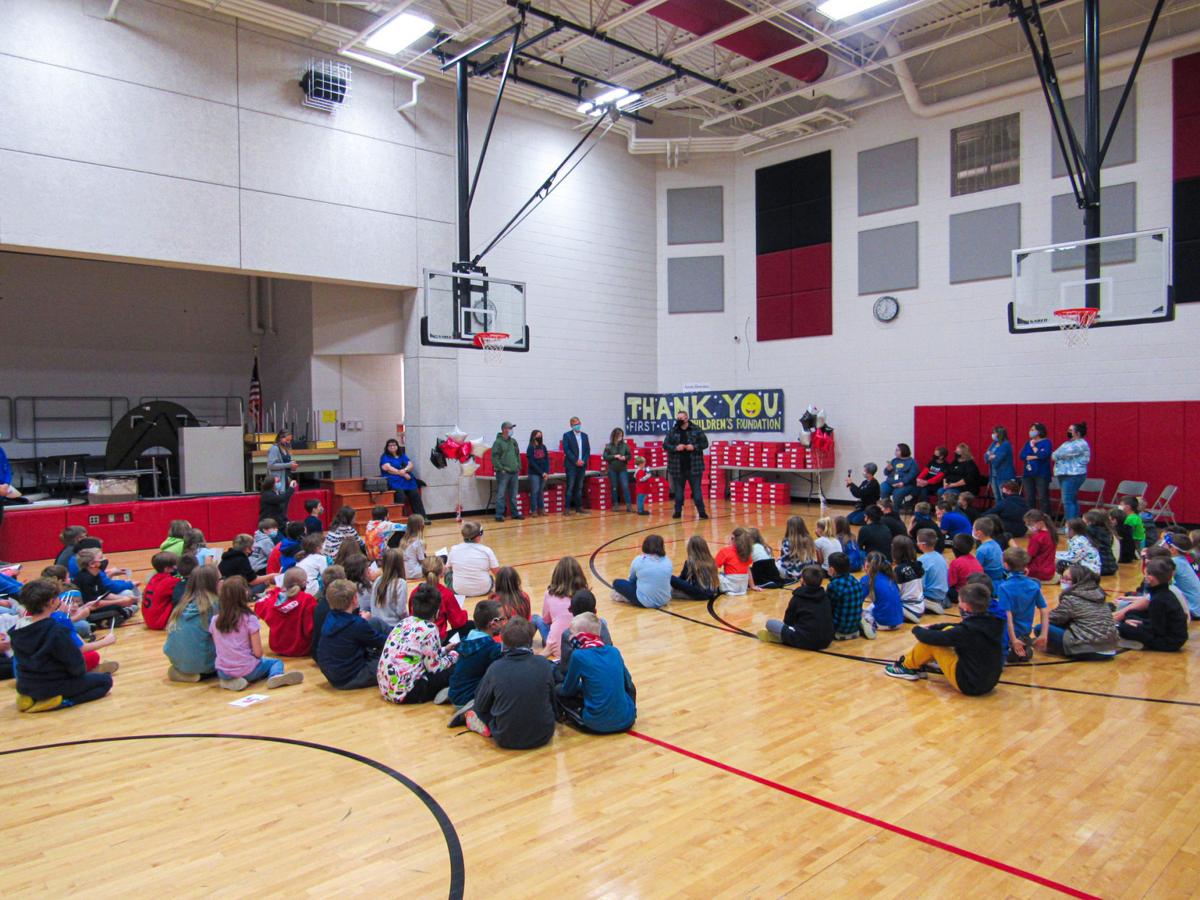 Matt Reed, founder of the First Class Children’s Foundation, is shown talking to third- and fourth-graders at Juniata Elementary School, just prior to presenting them with their Imagination Boxes. 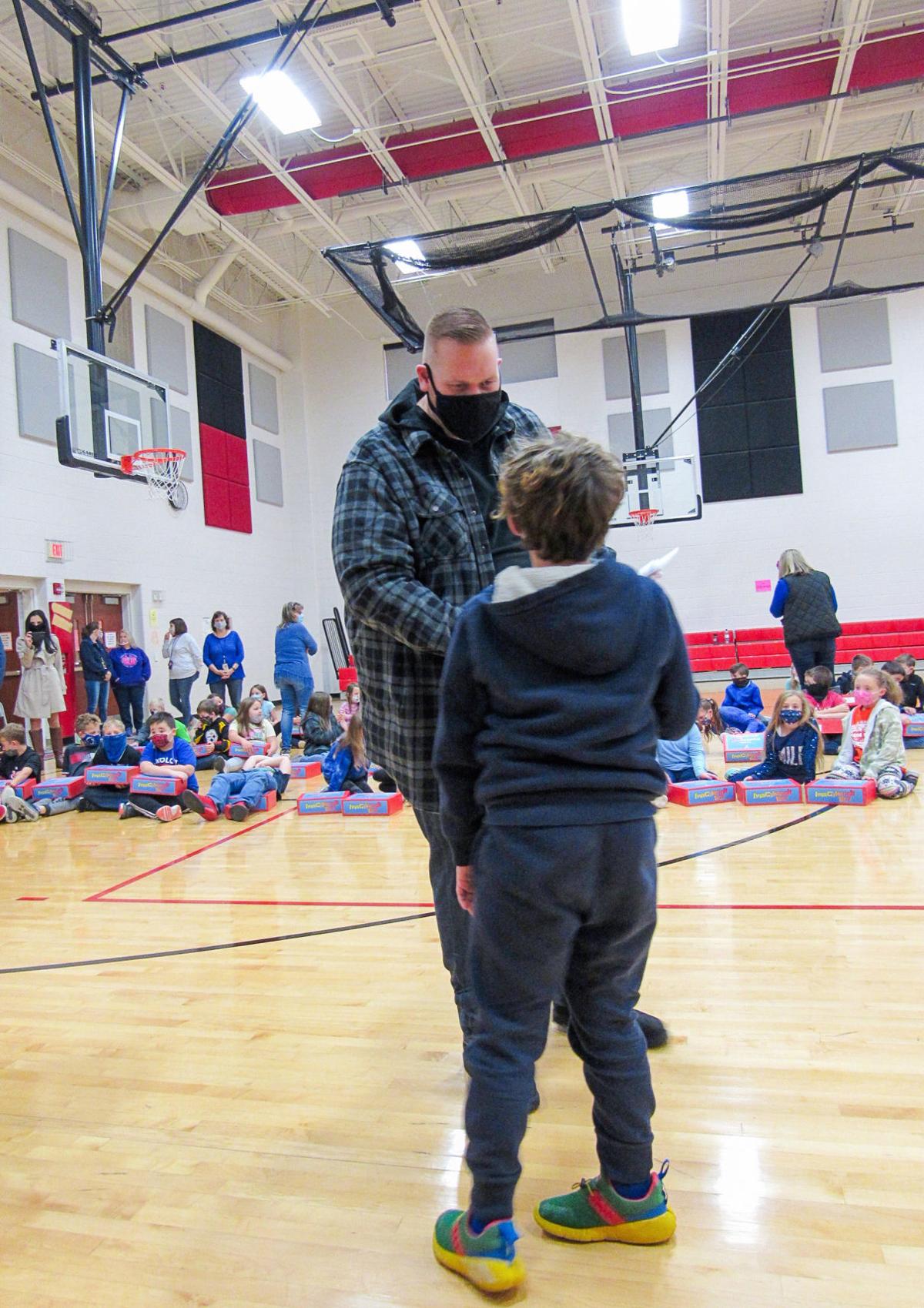 Cameryn Gump, a student at Juniata Elementary School, was one of the many students who presented handmade thank you cards to Matt Reed, founder of First Class Children’s Foundation. Gump also made bookmarks, which were part of the Imagination Boxes. 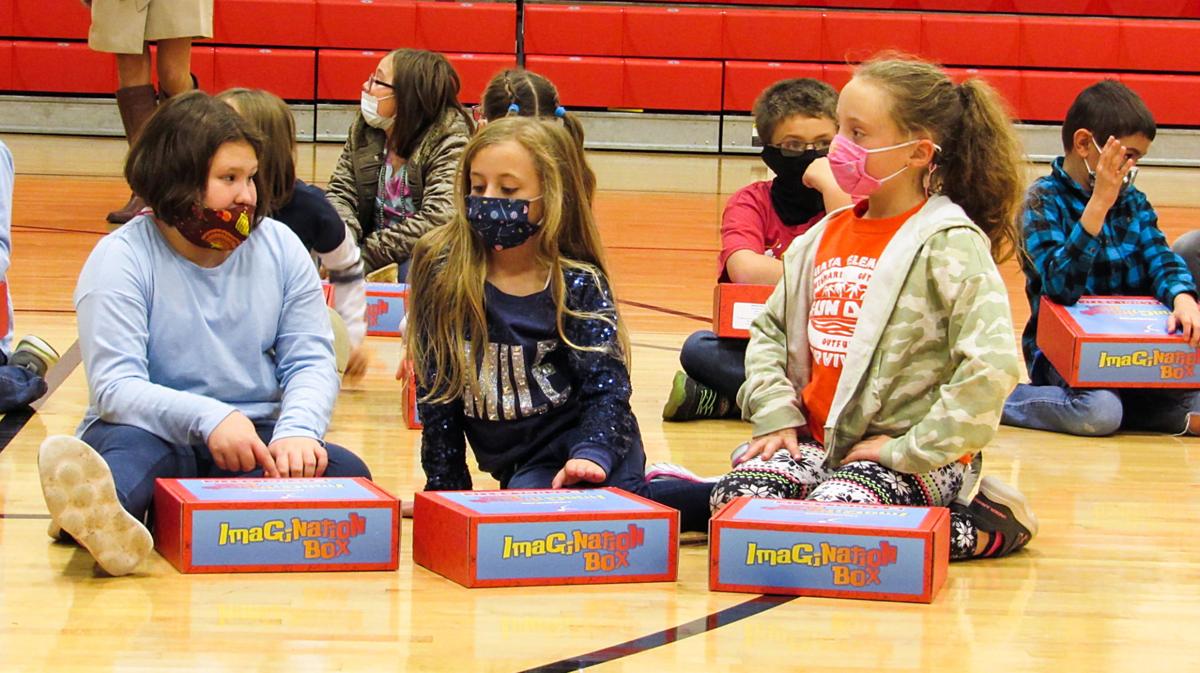 Matt Reed, founder of the First Class Children’s Foundation, is shown talking to third- and fourth-graders at Juniata Elementary School, just prior to presenting them with their Imagination Boxes.

Cameryn Gump, a student at Juniata Elementary School, was one of the many students who presented handmade thank you cards to Matt Reed, founder of First Class Children’s Foundation. Gump also made bookmarks, which were part of the Imagination Boxes.

DuBOIS — Students at Juniata Elementary School in the DuBois Area School District, approximately 300 of them, were presented last Friday with customized Imagination Boxes, compliments of the First Class Children’s Foundation.

Additionally, at last Thursday’s board meeting, Superintendent Wendy Benton recognized the work of the First Class Children’s Foundation, along with founder Matt Reed, for their “mission to inspire literacy, creativity and imagination.”

“Every Imagination Box contains essential school supplies, three Scholastic books and several items that represent the individual personality of each child,” said Benton. “Each box is customized and personalized. The children pick the books that they want from a Scholastic Book flyer and the First Class Children’s Foundation makes the magic happen.”

Most recently, Benton said students at C.G. Johnson Elementary in Reynoldsville have been the fortunate recipients of the Imagination Boxes, as well as the Imagination Station Book Vending Machine, which rewards students with books after displaying kindness and compassion, as part of the school’s Caught Being Good Program.

“One of the students at C.G. Johnson, Callie Hynds, was so inspired by her Imagination Box that she joined the First Class Children’s Foundation team,” said Benton. “If you’ve ever attended one of Matt Reed’s car shows, you will recall the most delicious, rainbow sprinkle, unicorn cookies homemade with extra sweetness by Callie. Callie’s hard work paid off, and she raised $2,000 from her unicorn cookies to help fund Imagination Boxes for other children in our district.”

Benton expressed appreciation to Reed and Hynds and said the district was “ecstatic” to welcome First Class Children’s Foundation to Juniata Elementary.

“On behalf of the DuBois Area School District and Juniata Elementary families, we are most grateful for the opportunity and look forward to partnerships for many years to come,” said Benton. “Matt Reed challenges others to pay kindness forward, and that challenge begins with us.”

Benton then proceeded to hand out “Here is a Kindness Challenge Card” for everyone in attendance at the board meeting from FCCF to help them get started.

“The team at DASD welcomes this challenge, and I hope all of you will as well,” said Benton.

During Friday’s presentation at Juniata, Reed said this is the third year for Imagination Boxes and the second full year that they’ve done.

“We did all of C.G. Johnson last year, and then this year we presented children at Juniata with the boxes,” said Reed. “Before that we used to just do classrooms, but after today is done, we will have given away a thousand of these Imagination Boxes. It’s a milestone day for sure.”

This year’s Imagination Boxes included school supplies such as markers, crayons, notebooks, colored pencils, scissors, glue, in addition to several customized items that the children choose themselves, he said. The books were donated by Scholastic, while the rest of the supplies were from First Class Children’s Foundation.

“Because every box is customized to each child’s individual personality and that’ll be three Scholastic books,” said Reed. “There’s a comic book with their favorite superhero on it and their favorite candy in there. There’s also a pack of Pokemon cards in every box this year.”

Prior to last week, Reed said the biggest giveaway FCCF ever did was 2019.

“I think that there were like 70 kids at the C.G. Johnson giveaway that we did back then, but this one is giving them away to every kid at the school. And I haven’t done that yet. Because last year with the pandemic, we just dropped them off and the teachers handed them out. We Zoom called in. So I’m so excited to be here and kind of recapture the feeling that you get whenever you give away this scale of something to children,” said Reed.

Reed said his ultimate goal now is to make sure that he can give Imagination Boxes away to every student in the DuBois Area School District.

“I’m hoping that we can do Wasson and Oklahoma over the next couple of years,” said Reed. “But overall, what I’m looking to do is really inspire the next generation to giving. And I think that we do that with this particular program, because it’s such a random act of kindness and I’m really excited for it. I think that the kids are going to get inspired by what we’ve done. There have been a couple of kids already who have gone out of their way to help us out. It’s really awesome and it’s really fulfilling to be able to do something at this scale.”