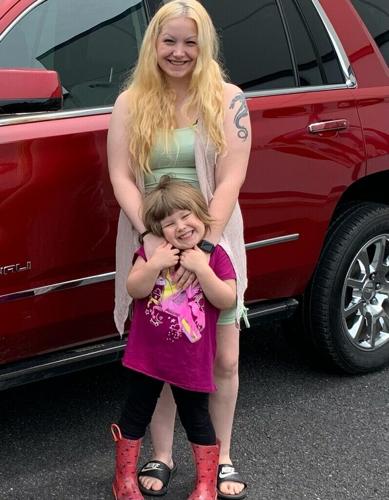 Samantha Scanlon, the author behind “Memoirs of a Moddler” blog and book, is pictured with her daughter, Amelia Sprague, an inspiration behind her writing. 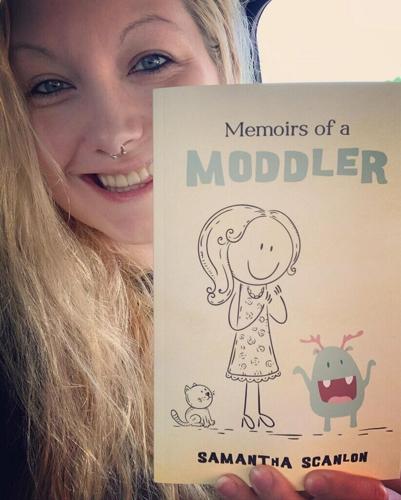 Samantha Scanlon, the author behind “Memoirs of a Moddler” blog and book, is pictured with her daughter, Amelia Sprague, an inspiration behind her writing.

REYNOLDSVILLE — For Samantha Scanlon of Reynoldsville, creating a blog about motherhood struggles started as a form of therapy. Now, she is known for making moms everywhere laugh, and providing a platform of posts many can relate to.

Scanlon, who has five children, said when she began penning about her day as a stay-at-home mom, it helped with her postpartum anxiety (PPA)/postpartum depression (PPD).

Initially, she started writing about her “moddler,” aka “monster toddler” in online mom-related groups, but ended up receiving backlash because of the out-of-the-box terms she would use when referencing children.

“Eventually, I got sick of having to explain myself and constantly being judged for being honest about my feelings. That’s when I started my blog. I created my own space to share the daily shenanigans of my kids,” said Scanlon.

Using the comedic blog platform, the “Memoirs of a Moddler” Facebook page, Scanlon was able to “log the development of her toddler’s personality.”

“The more progress she made through speech therapy, the more crazy things she would say, and I was able to document it to share with the world,” she said.

Scanlon was not a writer until she began sharing about her kids, and more than just the everyday “baking cookies” and coloring side of parenting. She discovered it helped her work through some of her own personal struggles.

“One day, I just decided to vent about my life. I found that the more I wrote, the better my outlook became. It turned into my own form of therapy,” she said.

Members of various mom groups who had enjoyed Scanlon’s writing before were quick to follow her new blog, she said. The page has grown from 100 followers to now exceeding more than 12,000.

“I’ve since started addressing more pressing issues besides the chaos that comes with kids, and diminished mental health,” Scanlon said.

She has also shared her own personal struggles, such as being an addict in recovery, and some political outlooks. In November 2020, her “pro-choice” post was shared more than 132,000 times, and shared among other platforms, Scanlon said.

Many of her followers had recommended that she write a book, which she joked about, fearing it would be too much work. Scanlon’s husband, Brian, reminded her that “she already put the work in.”

“I had been doing it for years while logging my day with our daughter. Getting everything together in a journal-style book was easier than I thought –the content was already there. I just needed to combine it in a way that would make sense in a book format,” she said.

The book “Memoirs of a Moddler” was published the beginning of June.

“I hope that as parents read about the hilarious, ridiculous, and sometimes disgusting things my toddler has done and/or said through toddlerhood, they’re able to find the humor in my writing,” Scanlon said.

This is also meant to be something that struggling parents can relate to, she added, helping them feel less alone.

“Raising kids is exhausting. It can be overwhelming, and sometimes frustrating. I know first-hand how lonely it can be too, especially when you avoid public interaction for fear of judgment because your child is the ‘wild’ one,” Scanlon said. “We’re all on this parenting journey together, doing the absolutely best we can to raise the next generation. If I can make at least one person feel like their not alone through their own journey, I’d call that a success.”

Starting her blog has been a rewarding experience, Scanlon said, and one that has helped her gain many friendships and become part of a community that “lifts one another up.”

“The comments are always either filled with parents dealing with the same issues I’m writing about, or those who have already experienced those issues and offer support and words of encouragement,” she said.

Scanlon has ended up helping many people who are struggling with feelings of being inadequate as a parent.

“I receive comments or messaged daily thanking me for bringing humor to their day, or writing something that they could deeply resonate with. I’ve had people tag me in posts about my book and how much they enjoy reading it,” she said. “The positive feedback I’ve received has been overwhelming.”

The book “Memoirs of a Moddler” is available through Amazon, Walmart, Barnes and Noble and other platforms.

Use Happy Jack® Kennel Dip as an area spray to