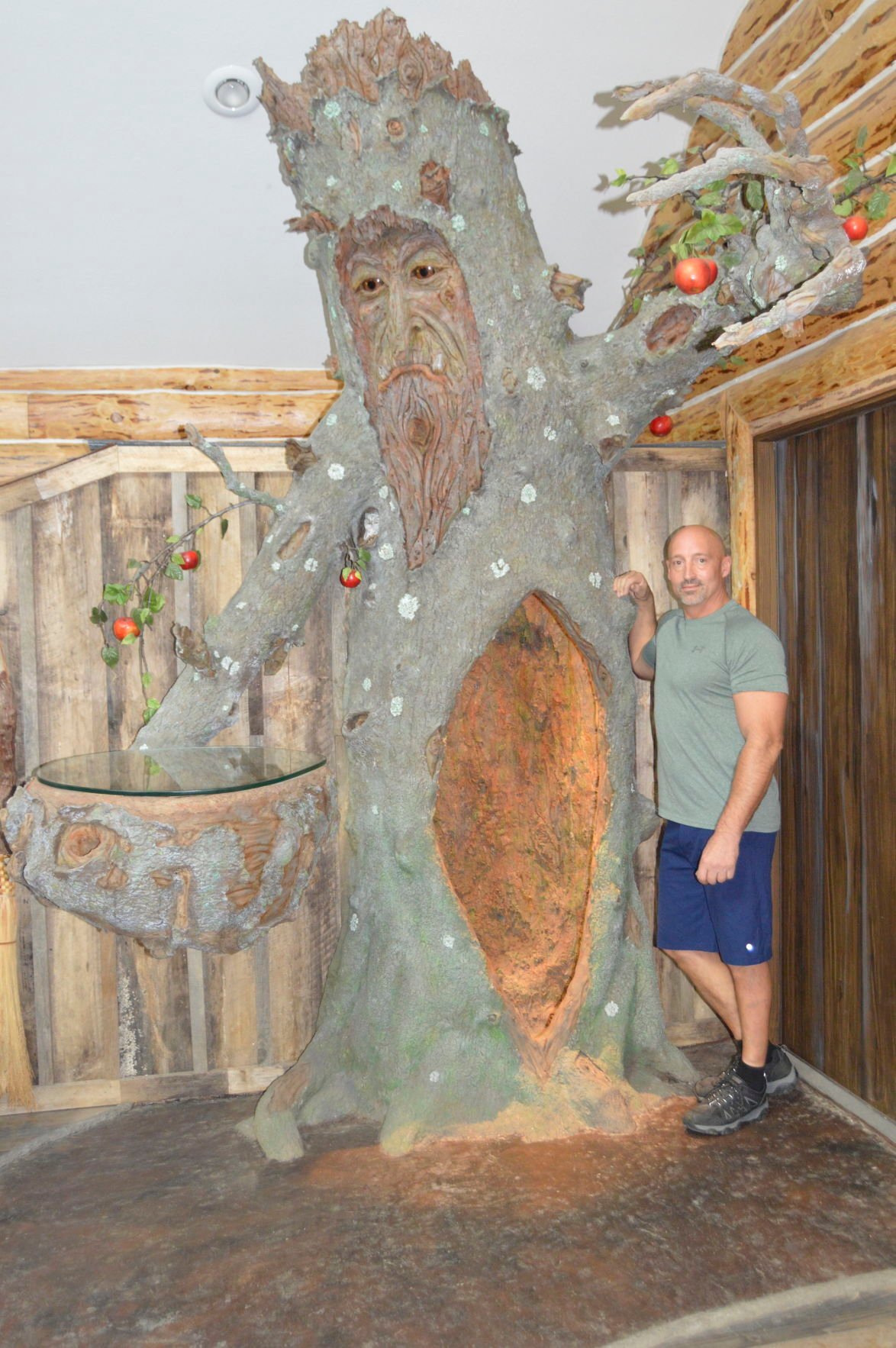 Jeff Crawford of St. Marys stands next to his largest epoxy tree sculpture, which is 10 feet tall. 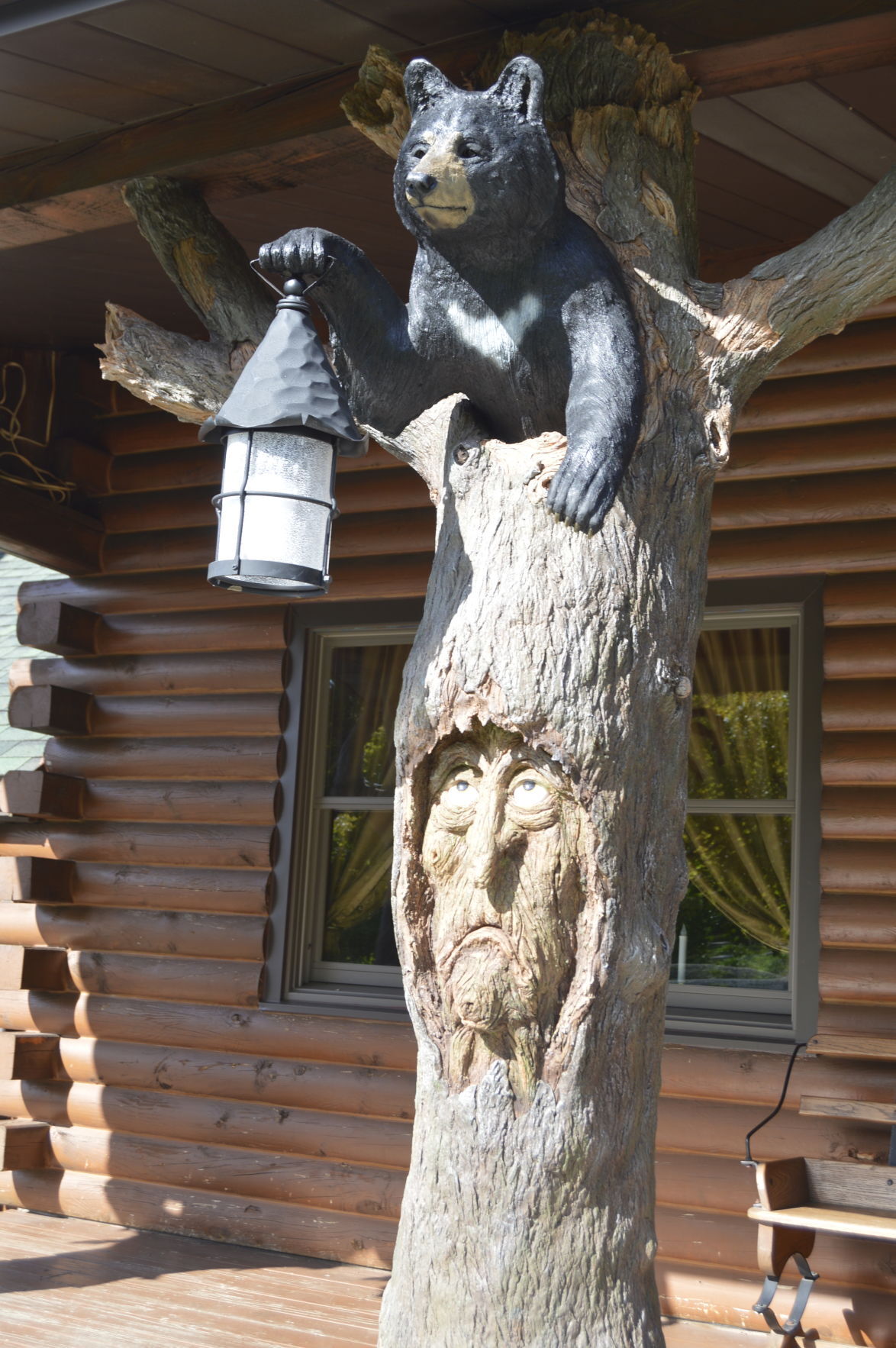 Pictured is one of the porch posts at Jeff Crawford’s home in St. Marys. 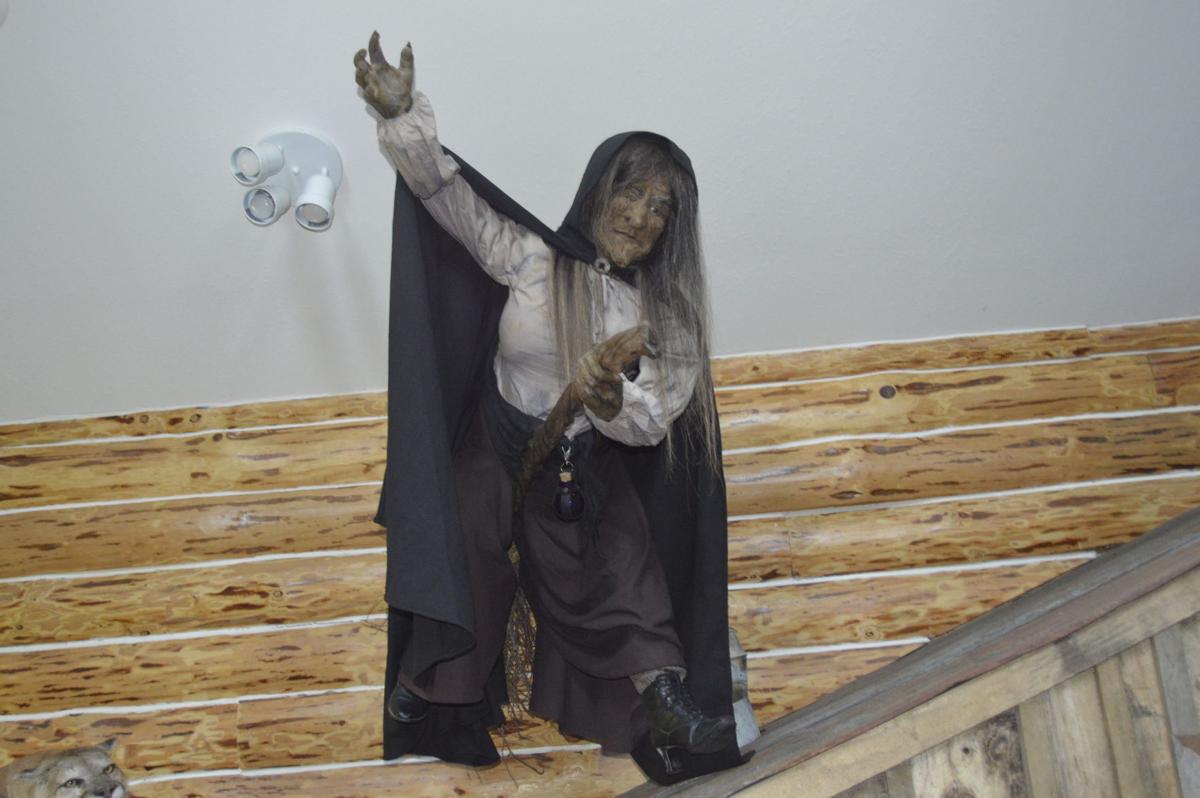 Pictured is a witch creation handcrafted by Jeff Crawford.

Jeff Crawford of St. Marys stands next to his largest epoxy tree sculpture, which is 10 feet tall.

Pictured is one of the porch posts at Jeff Crawford’s home in St. Marys.

Pictured is a witch creation handcrafted by Jeff Crawford.

ST MARYS — When passing by Jeff Crawford’s house on South Ridge Road in St. Marys, one may be compelled to stop and gawk at the extremely detailed tree creatures on his front porch. Each has a face, and each was sculpted by Crawford himself.

Using durable epoxy, little brushes and tools and his hands, Crawford creates just about anything tree-related. Each tree masterpiece has its own expression, and there are even some surprises hidden within their features.

Crawford said he’s been creating tree masterpieces since 2014, and “Wicked Woods Tree Sculptures” was born. He remembers being captivated by the tree faces in “The Wizard of Oz” and “Lord of the Rings” films, wanting to learn how to create them himself.

He began transforming his porch to include these detailed tree posts last August, said Crawford. Each also includes other creatures mounted on them, such as a smaller sculpted owl, possum or black bear.

Hiding tiny creatures throughout the trees is something Crawford says he enjoys, giving people little features to look for.

He also creates custom sculptures for people, such as wall hangings and sculpted tree mounts for taxidermy work. The most popular thing he is asked for, he says, are sculptures of owls.

He also makes personalized things like sculpting names into trees for weddings and the garage door roller for Kane Lawn and Garden.

Crawford, who is also a hunter, makes time for this hobby he loves, being that he also works in a carbon plant and has operated a taxidermy business – Whitetail Country Taxidermy – since 1986.

The adventure doesn’t stop outside of his home, though. Inside is a striking display room for several of Crawford’s creations. One is a sculpted witch on a broom, who is even sporting musk ox hair on her head for extra detail. Crawford noted that witches are one of his favorite characters.

Also in the room are some of his taxidermy creations, such as a black bear and bobcat.

Looking down over the entire room is Crawford’s largest tree creation, looming at 10 feet tall. This took him a year and a half to finish, he said. One of its surprise contraptions – that always certainly shocks visitors – is the door in the back of the inside of this tree sculpture, which ultimately leads to Crawford’s downstairs taxidermy shop.

He created his own mantel in the room, too, using epoxy, which has some of the awards he has won over the years, like “Artist of the Year” and “Judge’s Best of Show.”

When speaking about his tree creations, Crawford comes off very humble.

“I just like to recreate what he was in nature, and make him look as alive as I can,” he said of a sculpture. He also enjoys putting different expressions on each of their faces, making their eyes look a certain way and so on. For example, one of the trees appears to be rolling its eyes, while the other resembles an old man’s aging face.

He enjoys when people drive by and stop to check out his creations, Crawford said, and he invites people to do so. His address is 313 South Ridge Road in St. Marys.

ADOPTION OF NATHAN B.

NOTICE The Executive Committee of Workforce Solutions for North Central