Skip to main content
You are the owner of this article.
Edit Article Add New Article
You have permission to edit this article.
Edit
Welcome, Guest
Our Network
Home
News
Sports
Obits
Multimedia
Opinion
Living
Classifieds
+ More
Share This
1 of 4 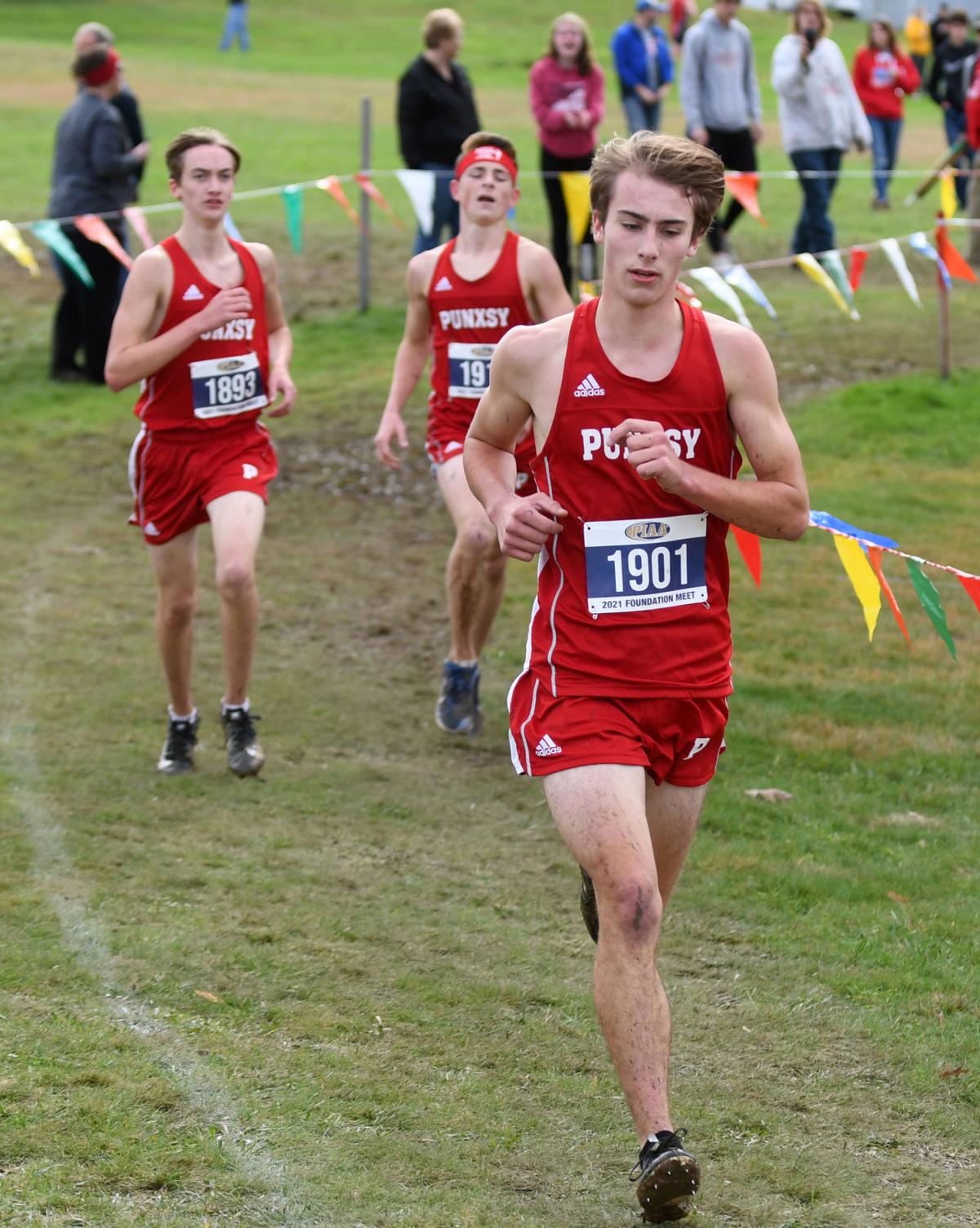 Punxsutawney’s Eric Surkala (1901) runs in front of teammates Andrew Barnoff (1893) and Evan Grove (1913) early in the Class 2A boys race Saturday in Ridgway. Surkala went on to finish second and Barnoff fifth as both Chucks earned trips to states. Groce finished 22nd. Punxsy was the team runner-up to DuBois by just six points, 46-52. 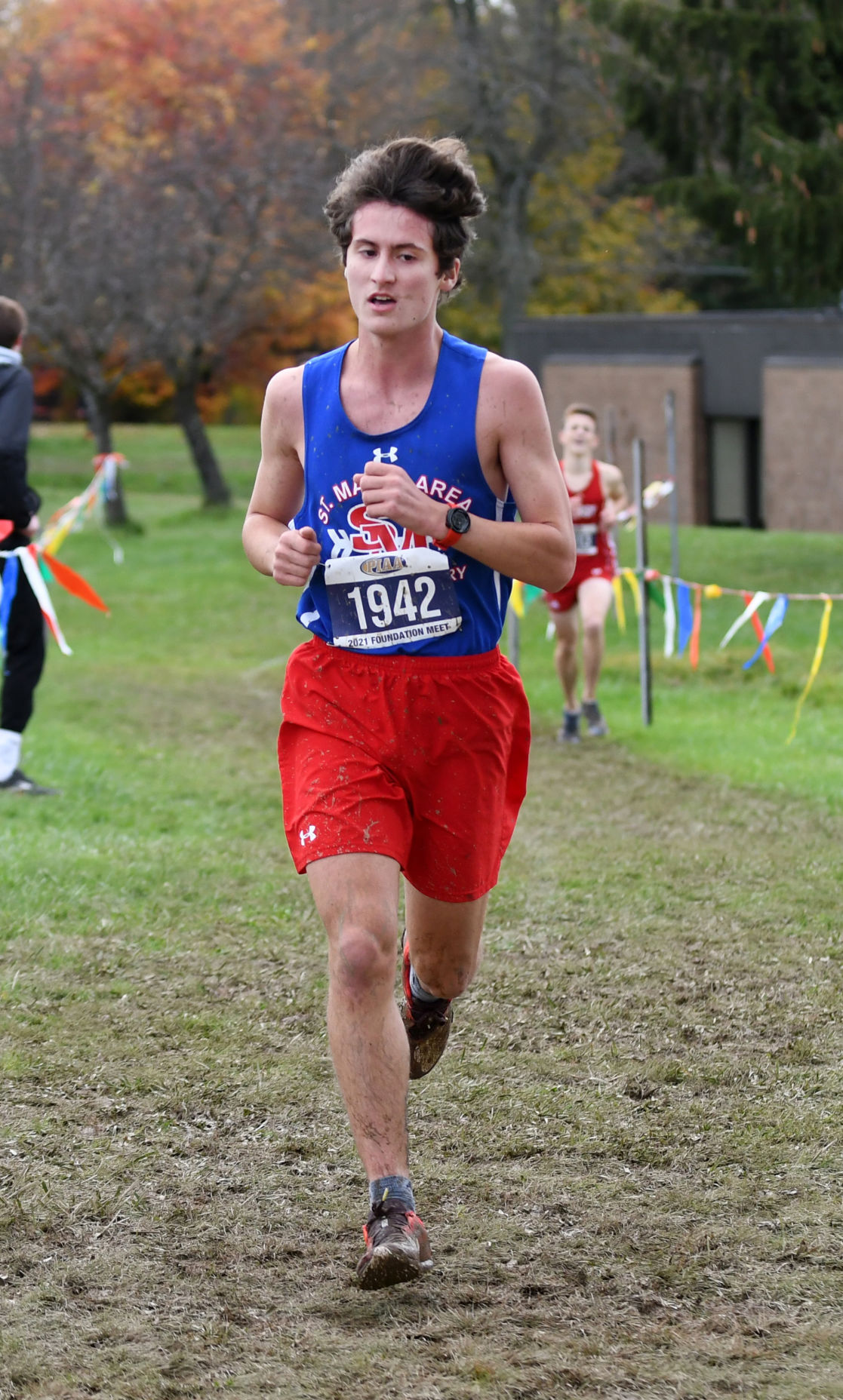 St. Marys junior Wyatt Foster finished seventh Saturday in the Class 2A boys race at the District 9 Cross Championships and earned a trip to the state meet. 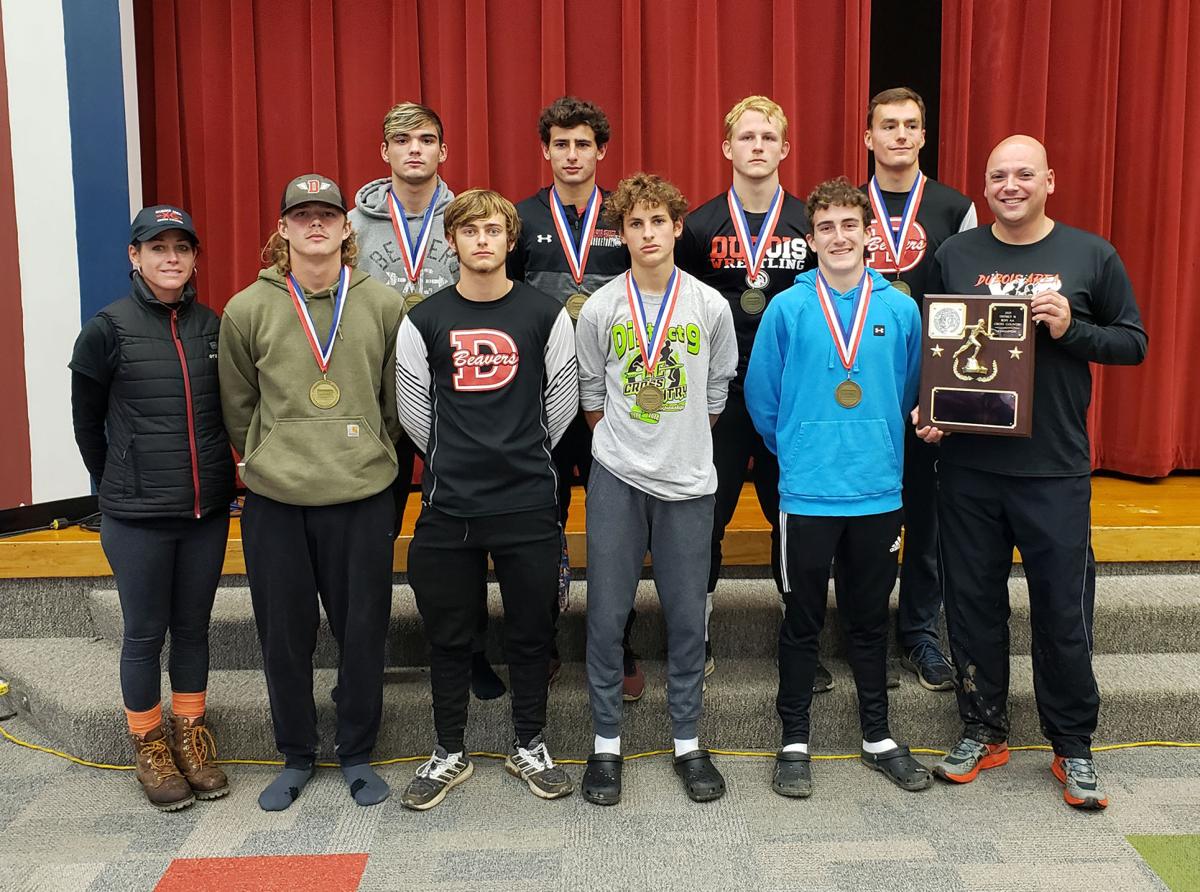 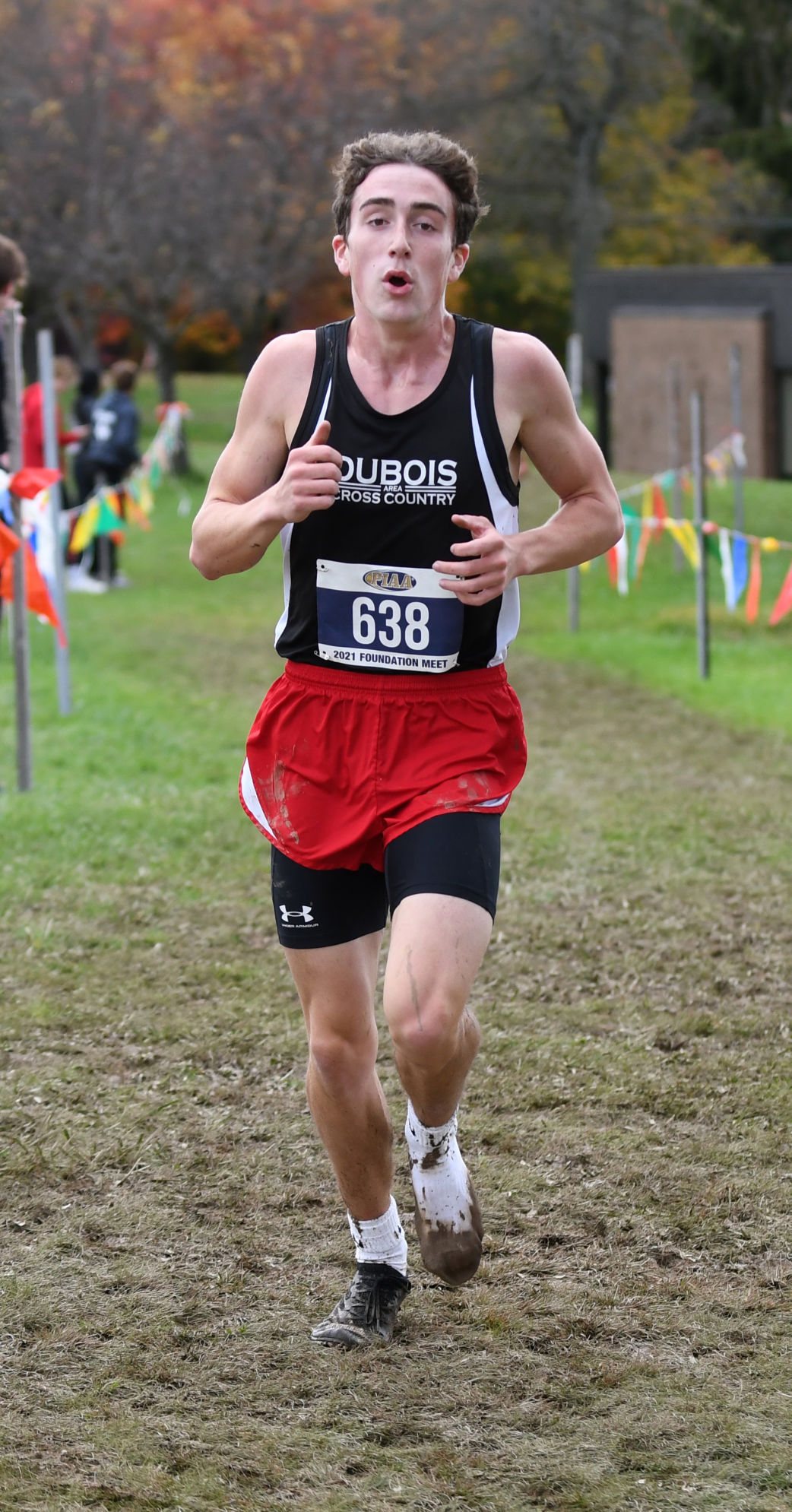 DuBois’ AC Deemer competes in the Class 2A boys race Saturday in Ridgway. The Beaver ran the final mile or so missing a shoe and still took home third place for DuBois’ best individual finish. DuBois capture its second straight D-9 team title on the day.

Punxsutawney’s Eric Surkala (1901) runs in front of teammates Andrew Barnoff (1893) and Evan Grove (1913) early in the Class 2A boys race Saturday in Ridgway. Surkala went on to finish second and Barnoff fifth as both Chucks earned trips to states. Groce finished 22nd. Punxsy was the team runner-up to DuBois by just six points, 46-52.

St. Marys junior Wyatt Foster finished seventh Saturday in the Class 2A boys race at the District 9 Cross Championships and earned a trip to the state meet.

DuBois’ AC Deemer competes in the Class 2A boys race Saturday in Ridgway. The Beaver ran the final mile or so missing a shoe and still took home third place for DuBois’ best individual finish. DuBois capture its second straight D-9 team title on the day.

RIDGWAY — It proved to be a little tougher than they expected, but the DuBois boys captured their second straight Class 2A team title Saturday on what proved be a muddy course by day’s end at the District 9 Cross Country Championships at Ridgway’s Francis S. Grandinetti Elementary School.

Tough course conditions are nothing new for the event given its date on the calendar, and Saturday’s course was far from the worse in recent years. Still, it proved to be a tough one to navigate for the Class 2A boys with three races already completed before they went out.

DuBois used a strong final mile to edge Punxsutawney, 46-52, for the title in a race that was pretty even between the top four teams. It appeared Punxsy had the lead at the 2-mile mark based on where runners were at that time before the Beavers made their move in the final mile. Had the event been a dual meet, DuBois would have won by a slimmer 27-29 score.

Punxsy and Bradford actually tied for the most runners in the Top 10 with three each, with DuBois and St. Marys both having two. The title was eventually won with the middle and back end runners, as DuBois put its first six runners (5 count towards team score) in the Top 17, while Punxsy only had four. Bradford (67) was third in the team standings, with St. Marys a point back in fourth.

“Nothing could have prepared us for today’s course unless we trained in a monsoon,” said DuBois coach Cory Yarus. “The mud was certainly a variable that increased the difficulty and altered our team strategy for the day. DuBois earned some narrow victories this season, and Saturday proved to be our greatest challenge yet.

“The Beavers’ district team roster was mostly comprised of seniors, so I told the boys to never look back and make their own destiny. Team chemistry like this does not bless you every season. These boys are brothers and they ran for each other today. Regardless of the outcome, today would leave its mark in history for DuBois Area Cross County.

“I could see that we were in for a tough race as soon as runners cleared the opening 100 yards and entered the trail section of the course. The top 10 was evenly spread across runners from DuBois, Punxsutawney, and Bradford. This pattern held true for the entire race, with the final outcome only being decided on the last half mile. The mud slowed paces and splits by a noticeable margin, but moreover, you could easily see the fatigue setting in a lot sooner on each runner as they battled for traction and balance.”

Bradford junior Manny Diaz ruled the day individually as he put together an impressive run given the conditions, crossing the line in 17:19 to win D-9 gold. He beat runner-up Eric Surkala, a senior from Punxsy, by 41 seconds.

DuBois’ run to the title was spearheaded by the senior duo of AC Deemer (11:27) and Joey Foradora (11:32), who finished third and fourth, respectively. Deemer ran the final half of the race with just one shoe after losing it in the muddy conditions.

The Beavers next four runners also finished in packs of two to help bring home the title.

Senior Ryan White (19:31) was the Beavers’ next finisher in 11th, while sophomore teammate Rudy Williams (19:46) crossed behind him in 12th. Shortly after them, junior Jaedon Yarus (20:06) and senior Christian Roemer (20:22) finished 16th and 17th to round out DuBois’ scoring and give them a blocker. DuBois’ final competitor, senior Luke Sturrock, placed 24th in 22:28.

With the way the field was spread out at the finish, it gave a lot of uncertainty to the coaches and fans as to who won, but it was the Beavers who prevailed and will be sending their entire team to states for a second consecutive year on the heels of a 19-0 regular season.

The title marks just the second time in program history the Beavers have won back-to-back team crowns. The Beavers first did it way back in 1982 and ’83.

“At the second mile marker, Punxsutawney had established a commanding lead over us with a score of 27-38 and to be honest, this is first time that DuBois had been in any ‘underdog’ position this season,” said Yarus. “I was a lot nervous and started reminding each runner of their running strength. Even though our backs were up against the ropes, the Beavers never lost hope as each place taken was one step closer to the district team title.

“I know the outcome now, but had you asked me about my thoughts during or immediately after the race, I would have expressed some anxiety and uncertainty. Deemer, Foradora and White showed their experience in spades by closing in on opponents, passing a few, while holding off any adversaries.

“I cannot say enough about what these young men accomplished this season. It truly has been a season of dreams. There will be time for bittersweet tears when the sun sets on the 2021 Beavers, but not yet. We still have one more task ahead of us (at states).”

Surkala was one of three area boys to secure individual trips to the state meet this Saturday in Hershey. The Top 5 finishers outside of team champ (DuBois) were guaranteed to move on.

Surkala will be joined in Hershey by senior teammate Andrew Barnoff (18:22), who came away with fifth place Saturday. The Chucks just didn’t quite have the depth to unseat DuBois as the champ though.

However, junior Evan Groce, who ran right with teammates Surkala and Barnoff in the first half of the race, couldn’t maintain that pace and ended up 22nd to round out the Chucks’ scoring.

St. Marys junior Wyatt Foster (18:29) grabbed the fifth and final individual berth to states with his seventh-place finish. He is the first Dutchman to reach states since Austin Frey in 2014.

The final individual state qualifier was Bradford freshman Brayden Friar, who ran an 18:29 to finish sixth, just ahead of Foster by the slimmest of margins.