You are the owner of this article.
Edit Article Add New Article
You have permission to edit this article.
Edit
Welcome, Guest
Our Network
Home
News
Sports
Obits
Multimedia
Opinion
Living
Classifieds
+ More
Share This
1 of 4 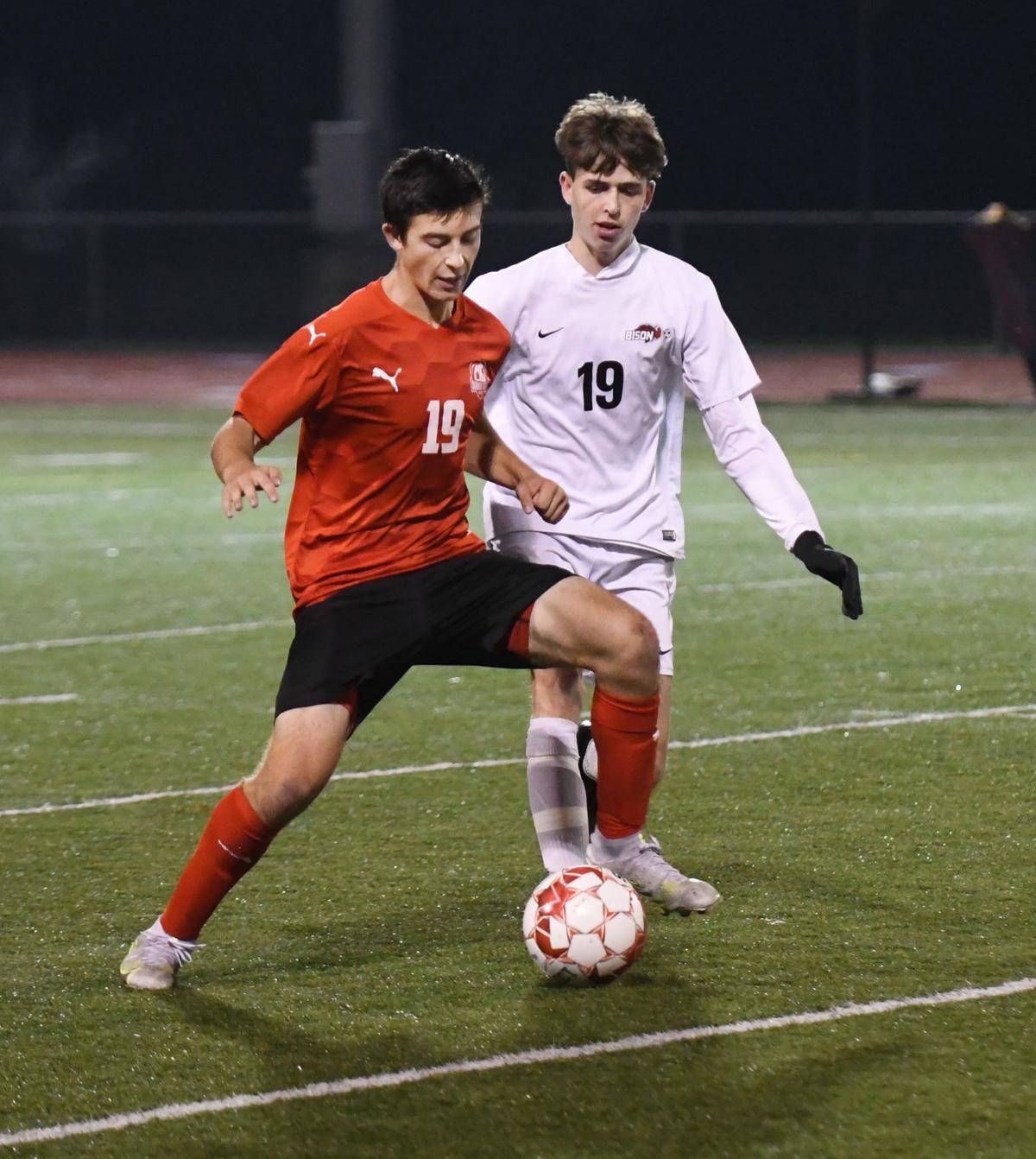 DuBois’ Brayten Sedor, left, looks to make a move against Clearfield’s Warren Diethrick in the midfield Wednesday night in a District 9 Class 3A semifinal game. 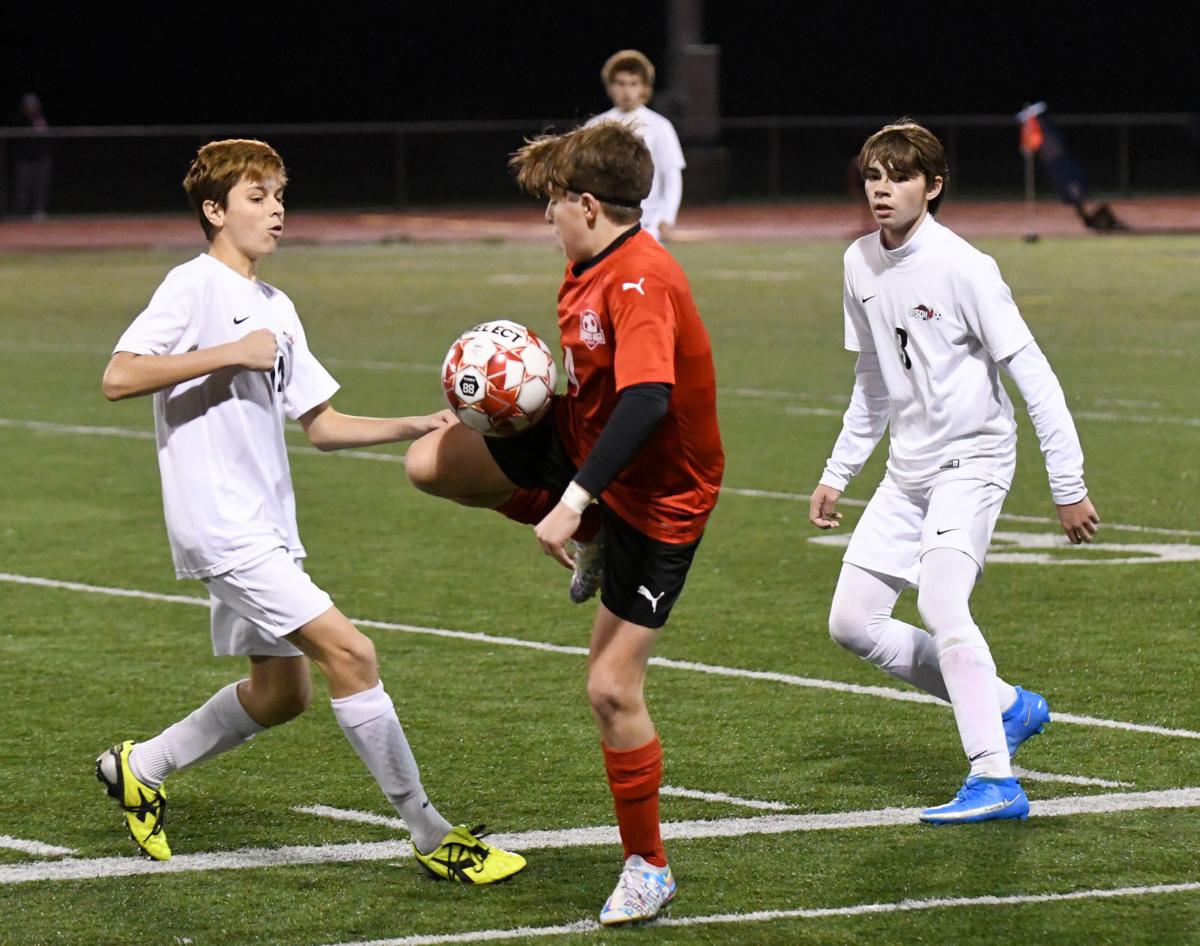 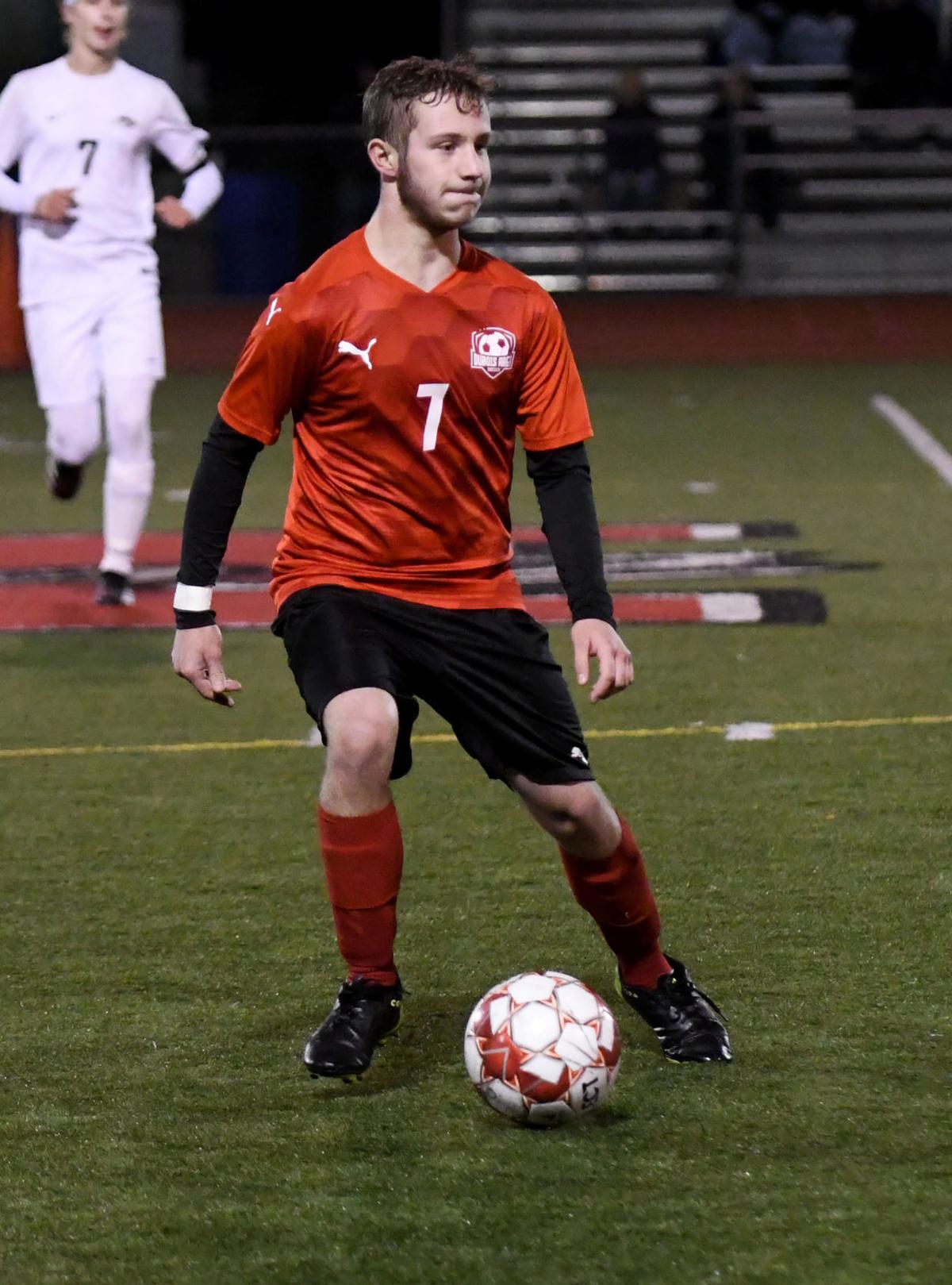 DuBois defender Zak Marshall looks to make a pass in the midfield Wednesday night against Clearfield in a District 9 Class 3A semifinal game. 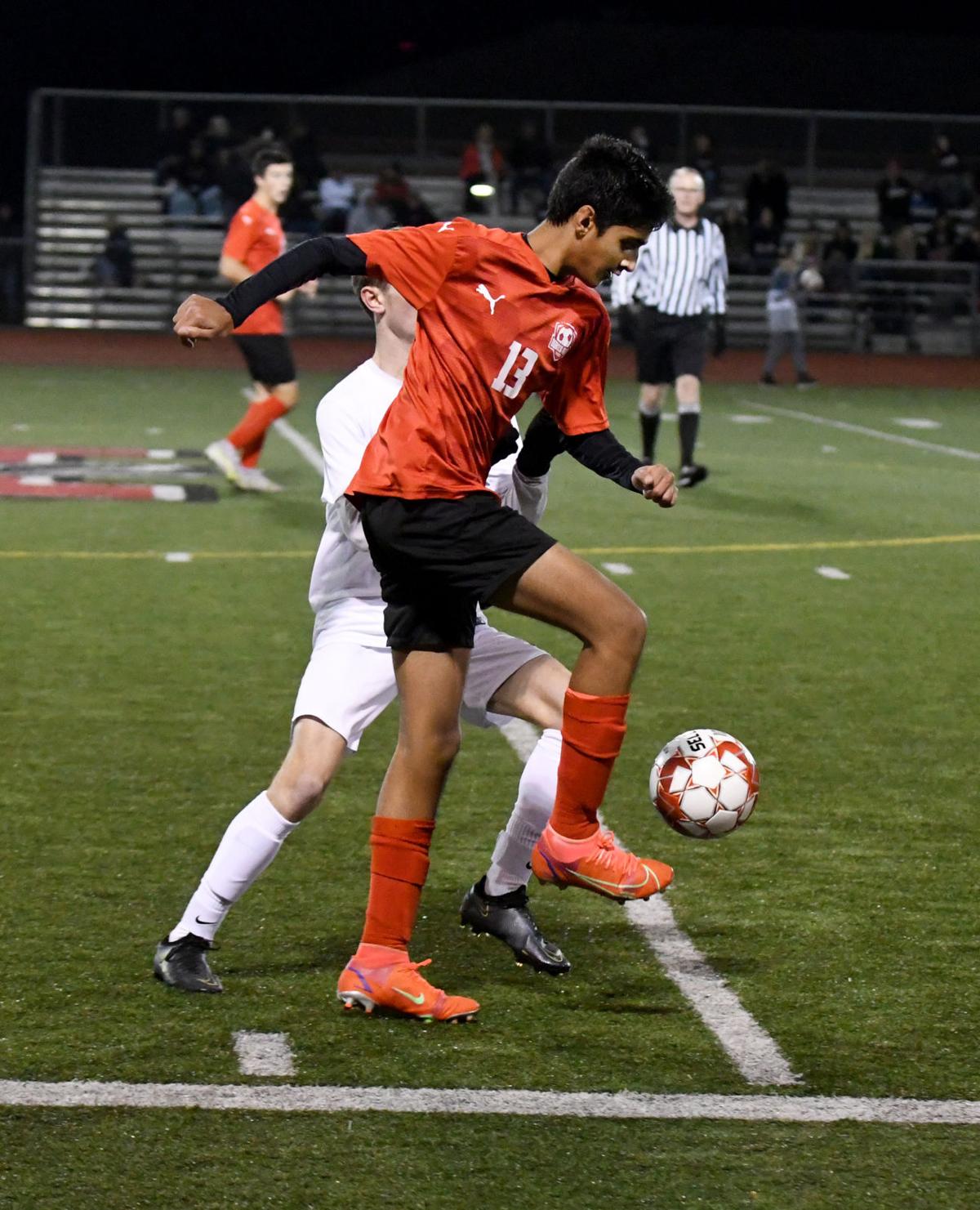 DuBois’ Jay Parekh (13) looks to make a pass in the midfield while pressured by a Clearfield defender Wednesday night.

DuBois’ Brayten Sedor, left, looks to make a move against Clearfield’s Warren Diethrick in the midfield Wednesday night in a District 9 Class 3A semifinal game.

DuBois defender Zak Marshall looks to make a pass in the midfield Wednesday night against Clearfield in a District 9 Class 3A semifinal game.

DuBois’ Jay Parekh (13) looks to make a pass in the midfield while pressured by a Clearfield defender Wednesday night.

DuBOIS — When the Clearfield and DuBois boys soccer teams met in the regular season, the teams nearly played to scoreless draw before the Beavers pulled out a 1-0 win in the closing seconds of overtime.

No such dramatics were necessary for either side Wednesday in a District 9 Class 3A semifinal matchup between two rivals, as the Bison scored just 2:40 into the game and never looked back in a 4-0 victory that propelled Clearfield into next week’s D-9 title game against top-seeded Bradford.

Hunter McKinney netted that quick strike for the Bison as part of a big night for the sophomore. McKinney finished with two goals and assist, with teammates Cole Miller and Evan Davis also finding the back of the net in the victory.

The Bison also played physical defense on DuBois’ best player, senior Brayten Sedor, which in turned slowed slowed down the entire Beaver offense. DuBois couldn’t muster a shot in the opening 40 minutes and had just two game, both of which were stopped by keeper Todd Hallman in a shutout effort.

“We’ve had some kids out because of injury that last part of the season, and a couple other kids coming back from injury tonight,” said DuBois coach Matt Erickson. “Some of them were probably still a little injured. They (Bison) played a fast-paced, physical game, and with the youth we had in the field this year, we just couldn’t match up with that tonight.

“That early goal hurt us, and that was something we struggled with all year. If we got down by a goal or two, we just put our heads down and get frustrated and get chippy with each other instead of picking each other up.

“We were down to start the second half already, and I think a lot of that was just the youth an inexperience we have year on not knowing how to rebound from that (adversity). The kids learned a lot this year, and hopefully next year these younger guys come back and are the leaders on the team.”

Clearfield made a quick push to open the game and pressured the DuBois net in the opening couple minutes, with McKinney coming up with an opportune goal.

A DuBois defender tried to clear a Bison cross into the box, but his clearing attempt went right to McKinney. The Bison settled the ball, then fired a shot past two defenders that beat keeper Brohm Hemke at the near post just 2:40 into the game.

That goal proved to be all the Bison needed, but they added a couple insurance goals along the way to avenge the shutout loss to the Beavers in the regular season.

The remainder of the first half was largely played between the 18s, as Clearfield only had three shots itself after McKinney’s opening goal.

Hemke stopped a shot by Davis in the 18th minute, while Ian Gibson had a shot a shot slide just wide left in the 25th minute.

Bison junior Camden Gormont picked up a yellow card just past the 37-minute mark for what was deemed an accumulation of team fouls by Clearfield against Sedor. Despite the physical play continuing in the second half, it was the only card handed out by officials.

Sedor was forced from the game late in the second half with a lower leg injury. It was his final game in a Beaver uniform, along with fellow seniors Houston Hemke and Thaddeus Slima.

Just when it looked like Clearfield would take that 1-0 lead into the half, the Bison struck again in the final two minutes after being awarded a direct kick. That kick was plated into the box and knocked out of play by a Beaver defender for a Bison corner kick.

Once that corner was played into the box, McKinney tracked down the ball and made a nice heel pass to Wilson, who blasted home a shot to put the Bison up 2-0. That late score seemed to take what life was left in the Beavers away.

DuBois’ best scoring chance of the game came early in the second half when Sedor got his lone look on goal. However, Hallman made a diving, one-handed save to preserve the Bison’s 2-0 lead.

Hallman made his second and final save just before the 56-minute, as DuBois never threatened again in the final 24 minutes of the game.

Clearfield put the game away for good with a pair of goals just 45 seconds apart in the 63rd minute.

Davis scored the first of those goals from 33 yards out when he hammered a direct kick into the far top-left corner of the net. The long-range shot sailed over the head of leaping teammate Luke Sidorick and DuBois keeper Hemke before finding the net.

McKinney scored from nearly the same spot 45 seconds later as his long shot skidded off the wet turf. Hemke got two hands on the shot but was unable to stop it was it deflected off them and trickled into the net to set the eventual final at 4-0.

Sidorick nearly scored a fifth goal for the Bison with just under four minutes to play, but his shot rang off the crossbar.

Clearfield and Bradford will battle for the Class 3A title on Monday at 7 p.m. at Brockway’s Varischetti Field.