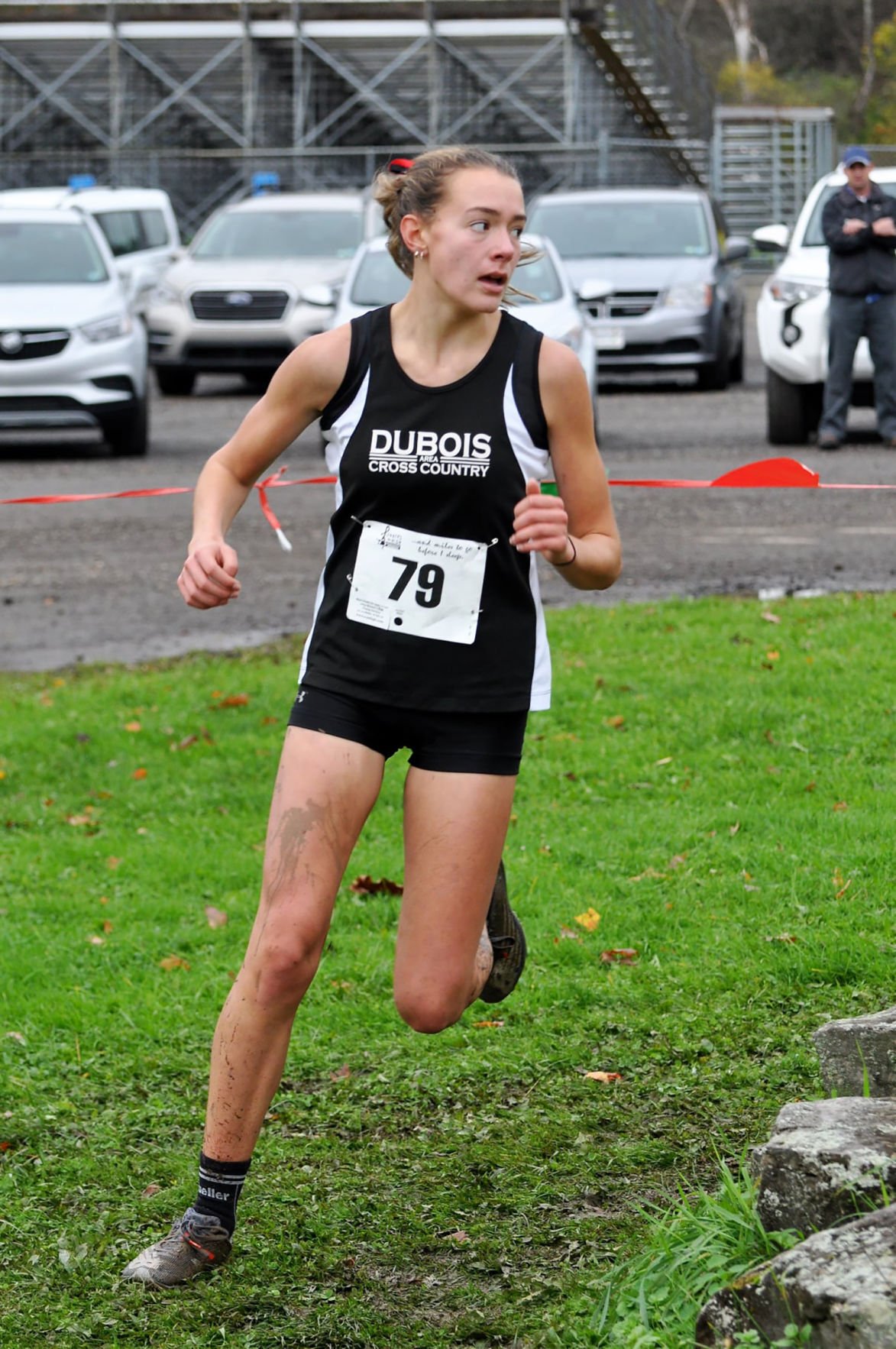 DuBois’ Morgan Roemer takes a peek ahead of her as she rounds a curve during the District 8/9/10 Class 3A girls championship race Saturday in Titusville. Roemer was the silver medalist on the day. 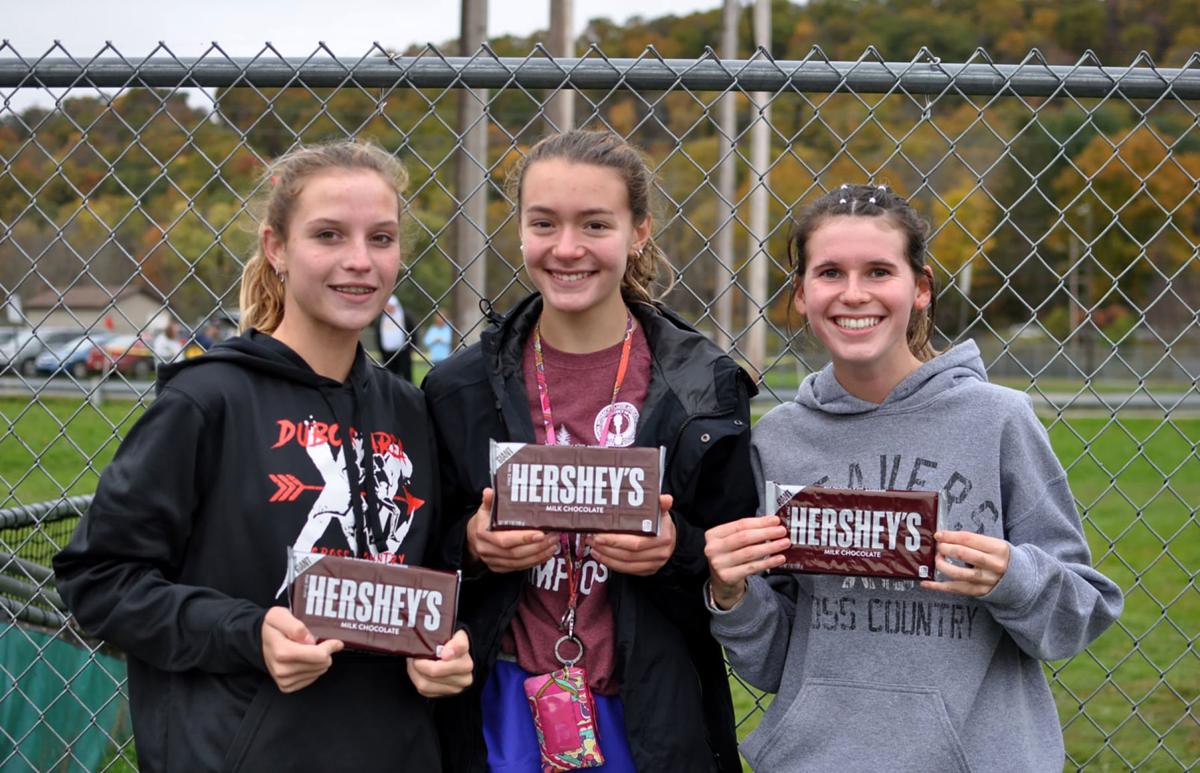 The DuBois girls cross country team made the trip to Titusville Saturday morning to compete in the District 8/9/10 Class 3A Championship and came home with three state qualifiers and a second-place finish in the team standings. Punching their tickets to states as individuals were (from left to right) Sidney Beers (3rd place), Morgan Roemer (2nd place) and Morgan King (8th place).

DuBois’ Morgan Roemer takes a peek ahead of her as she rounds a curve during the District 8/9/10 Class 3A girls championship race Saturday in Titusville. Roemer was the silver medalist on the day.

The DuBois girls cross country team made the trip to Titusville Saturday morning to compete in the District 8/9/10 Class 3A Championship and came home with three state qualifiers and a second-place finish in the team standings. Punching their tickets to states as individuals were (from left to right) Sidney Beers (3rd place), Morgan Roemer (2nd place) and Morgan King (8th place).

TITUSVILLE — As the lone Class 3A team in District 9, the DuBois girls country team has been road warriors in recent years when it comes to the postseason, and this year was no different as the Lady Beavers trekked to Titusville Saturday morning for the District 8/9/10 race — which was part of District 10’s overall Championships.

Poor weather conditions earlier in the week made for less than ideal conditions at the Ed Myer Complex where the event was held as the course included sections submerged in 3-4 inches of water as part of a slippery terrain.

However, a youthful field that featured just one senior negotiated those conditions the best they could, with the team title coming down to a battle between DuBois and Allderdice from the Pittsburgh City League (District 8).

And, it was Allderdice that took home both the team crown (29-39 over DuBois) and the individual title as junior Ruthie Haworth bested Lady Beaver sophomore Morgan Roemer by 33 seconds, 19:50-20:23. They were the only runners to break the 21-minute mark on the day.

Roemer also was the runner-up in the event a year ago when it was hosted at the Schenley Oval in Pittsburgh.

“Roemer has been a true leader on the Lady Beavers squad with her ‘one-for all’ and ‘all for one’ attitude,” saidi DuBois coach Cory Yarus. “Roemer is an exceptional runner, bar none, but her presence on the team exudes integrity and raises these ladies’ confidence to a whole new level. Roemer deserves this berth to states as she has been the top runner for the Lady Beavers all season.”

DuBois also had the third-place finisher in sophomore Sidney Beers (21:14), but Allderdice put five runners in the Top 11 to best the Lady Beavers by 10 points in the team battle.

Beers used a strong closing kick to hold off the lone senior in the field, Erie High’s Aurora Fuchs who finished in fourth five seconds behind the Lady Beaver.

Roemer and Beers punched their tickets to the PIAA Championships as individuals, as did sophomore teammate Morgan King, who finished eighth (22:00). King outran McDowell sophomore Kaitlyn Stravinsky to the finish line by three seconds to secure the fifth and final individual spot to Hershey.

Roemer and King were state qualifiers a year ago, while Beers is headed to Hershey for the first time.

“Sidney Beers deserves equal credit for working up to third place and holding it from Erie and Allderdice,” said Yarus. “Beers was shoulder-to-shoulder at times with Fuchs (Erie) and Naveh (Allderdice) but succeeded in pressing a fast split during the third mile to outlast the pack.

“King started the race a little further back in the pack than I would prefer. However, she made sizeable gains at each mile marker, picking off a few runners at a time. King smiled throughout the whole race, punctuating her love of the sport. She always says, ‘Got it Coach’ as we are shouting instructions to her from the sidelines. King listened to us today and dropped her third-best time of the season. King’s performance was topped by an amazing finishing sprint holding off Stravinsky for the fifth and final individual state berth.”

“In the end, the Lady Beavers gave a valiant performance to cement a second place team finish with 39 points, only falling to a talented squad of runners from Taylor Allderdice earning 29 points,” said DuBois coach Cory Yarus. “Although the outcome was not what the Lady Beavers ideally hoped for, I am incredibly proud of the team performance today

“Competing at the AAA level means that DuBois is running against teams that we only see outside of regular competition, such as invitationals and district championships. The girls’ energy leading up to championships can only be described as palpable. They really wanted to give it their best in hopes of earning a team title. The course conditions were an equalizer for all runners, so the results came down to grit and stamina.”

The lone senior to compete in the championships were Erie High’s Aurora Fuchs, who finished fourth five seconds behind Beers.