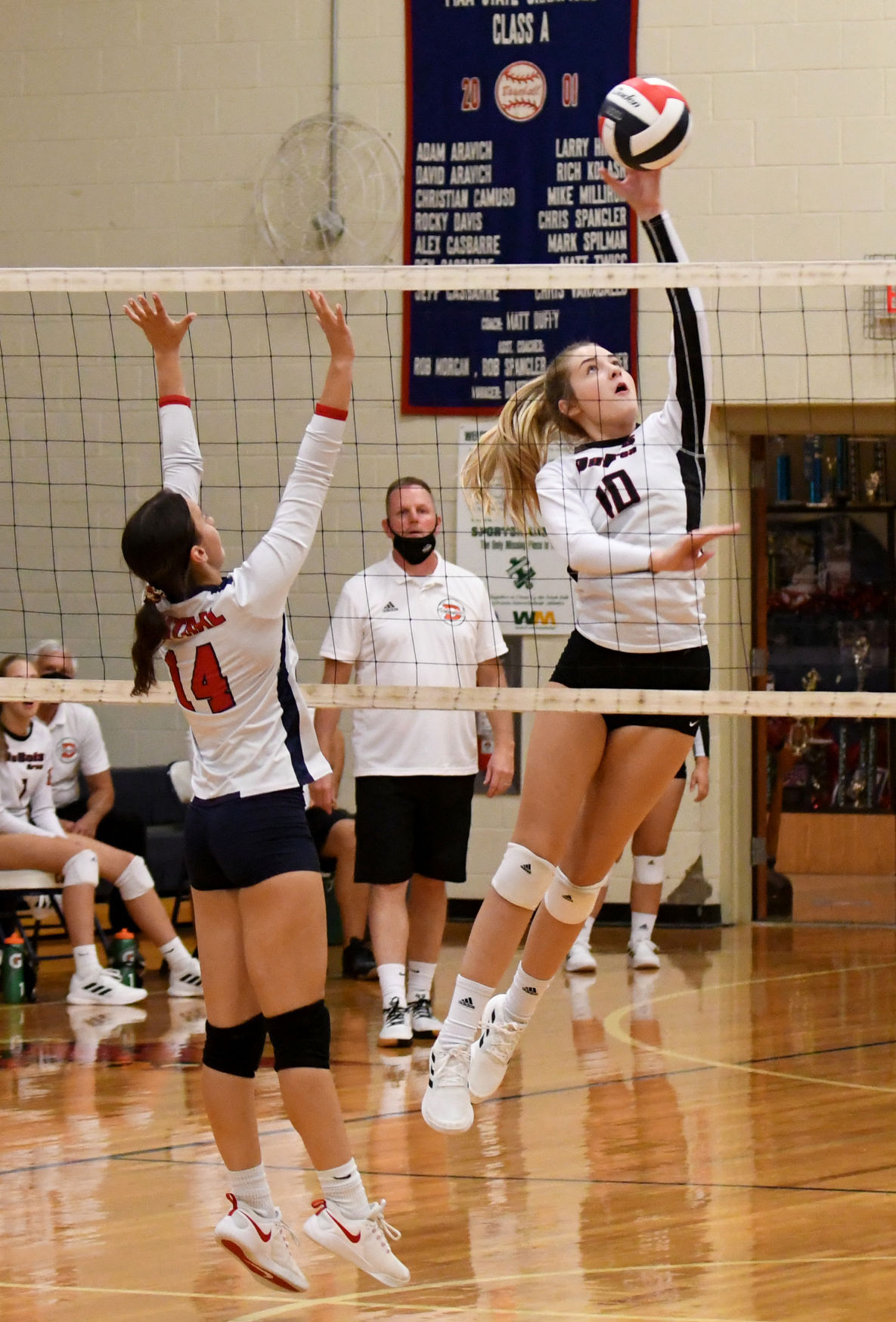 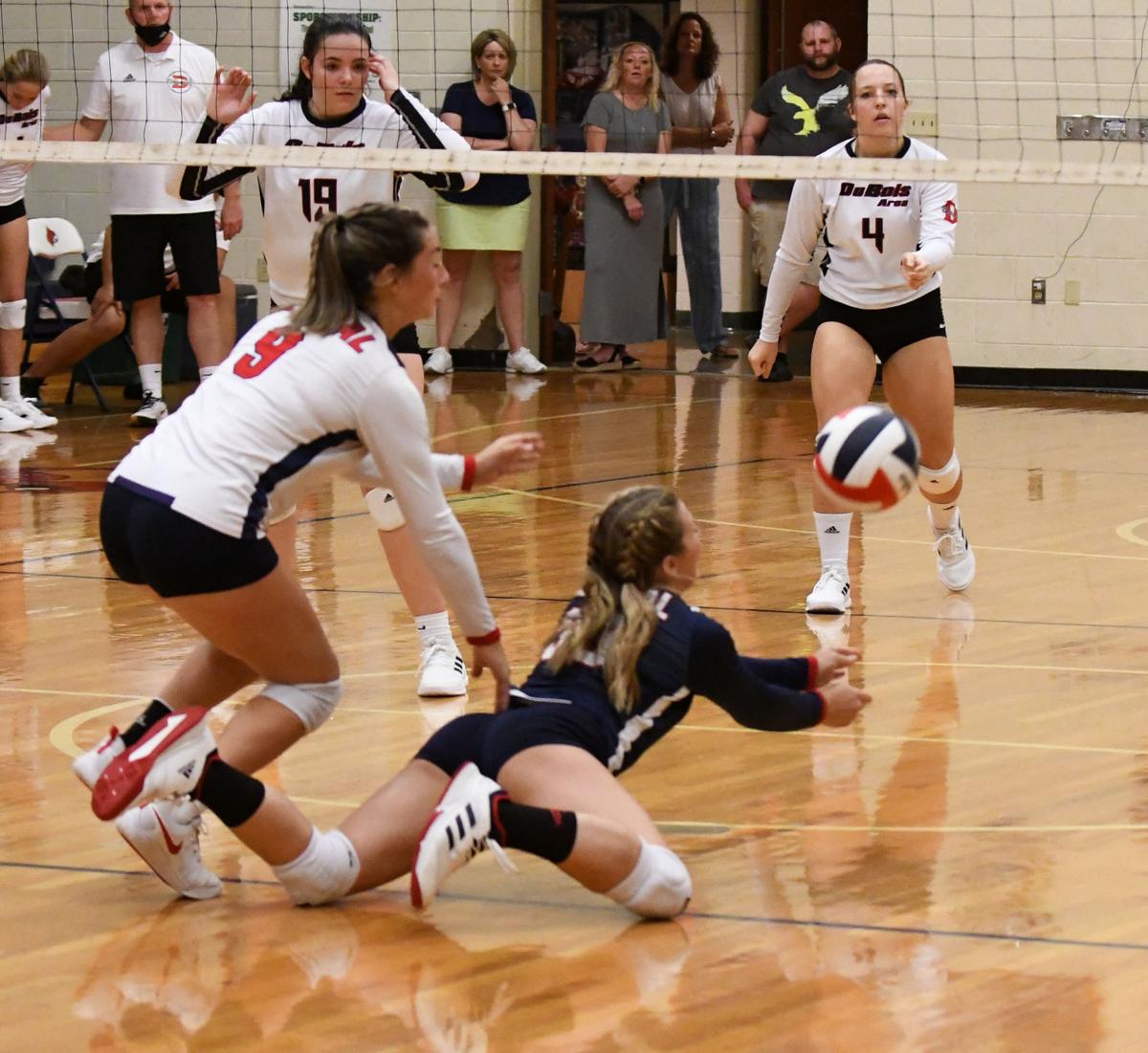 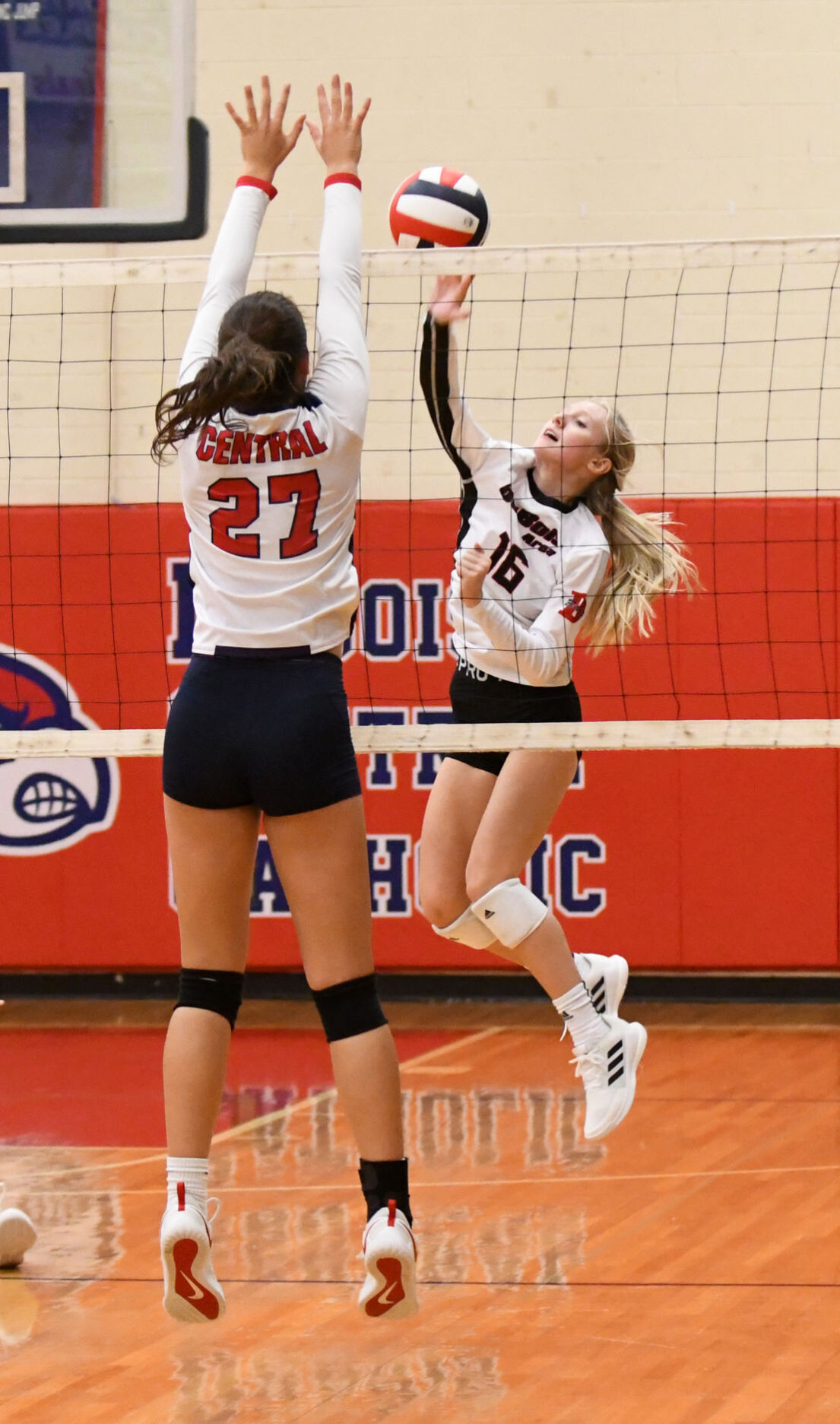 DuBOIS — The DuBois volleyball team opened Monday’s night’s matchup against cross-town foe DuBois Central Catholic in dominance fashion, but then the Lady Beavers were forced to work to finish off a sweep of the Lady Cardinals, 25-4, 25-16, 25-20.

Senior Lauren Walker fueled DuBois’ lopsided first set victory by serving up 13 straight points, including six aces, before teammate Morgan Pasternak promptly finished off the set with seven points of her own, two of which were aces.

Serving, as well as serve-receive, were strong points for the Lady Beavers throughout the match, as well the hitting of senior Ashlyn West, who hammered home a match-high eight kills.

However, the Lady Beavers had their moments where they struggled to maintain that level of play following that dominant first set, and DCC capitalized to put together a couple nice runs, particularly in the third.

In the end, those glimpses of solid play weren’t enough for DCC to overcome a deep DuBois squad that ran a couple different looks (lineup-wise) at the Lady Cardinals in the final two games.

“We kind of struggled to maintain things after that first set at times, and we’ve talked a lot with them about trying to maintain your level of play. But, sometimes it’s hard because we’re making substitutions because we have a lot of girls who can play, and I want to get them all out there.

“It’s kind of a double-edge sword because you want to build continuity, but at same time you’re shooting yourself in the foot because you’re making all those substitutions. I’m willing to sacrifice that a little bit because all the kids are working hard, so they all need some time out there.”

DuBois came out of that opening sequence with a 4-3 lead as Walker toed the service line and all but put the set away with her huge service run. Pasternak and Leah Colville each had kills in that run to go along with Walker’s six aces.

Central’s faith Jacob finally ended Walker’s run with a tip over a Lady Beaver blocker, but it only delayed the inevitable. DuBois got the serve right back as a Colville earned a sideout with a kill.

Colville then recorded a second straight kill to jump-start Pasternak’s seven-point run. Setter Emily Snyder punctuated that run, and the opening set, with a kill on a free ball to give DuBois the 25-4 win. Colville had three kills on the night. Pasternak ended the night with nine points and three aces.

DuBois carried that momentum into the second set and jumped out to a 7-1 advantage on a point by Kat Patton and five from Colville.

The Lady Cardinals didn’t hang their head though, and battled back into the game, using two points by Jacob, one from Maddison Hoyt and later three more by Alyssa Johnston to make it a one-point game at 15-14.

Central couldn’t get quite pull even though, as a sideout on a kill by Gregory and two points from Patton pushed DuBois’ lead back out to four at 18-14.

The teams then traded missed serves before five straight points by Colville gave DuBois game point at 24-15. Kendra Cowan had two kills in that spurt, while Colville had an ace. The Lady Beaver senior couldn’t quite finish off the set though, as a missed serve ended her run. Colville had all 10 of her points in the set.

DuBois finished things off the ensuing point, as West hammered home a kill for a 25-16 set win and 2-0 lead in the match.

Set No. 3 started much like the second, with DuBois again racing out to a 7-1 lead behind a four-point service run by Eden Galiczynski that featured an ace and kills by west and Hannah Spinda. Central Catholic countered with a six-point run by Jacob that gave the Lady Cardinals a 10-8 advantage.

The teams traded sideouts and single points before DuBois gained control back when Walker had another nice service stint. This one was five straight points, including a pair of aces, and gave the Lady beavers a 19-15 lead. Walker finished with match highs in points (19) and aces (8).

Galiczynski added three more points in her final service of the night to make it 23-16 before the Lady Beavers eventually won the set 25-20 to complete the sweep. Galiczynski had seven points in the match.

“I think we had a lot of jitters (in 1st set) because we have this new system, and they only have three back there (back row),” said DCC coach Liz Snell. “They get scared and want to stay on that end line, and I’m trying to force them to come up. They have a hard time adjusting because they think they need that time, and against a team like that (DuBois) you don’t have that time.

“We talked beforehand, and we knew what we were up against. I told them tonight their job was to battle back and pick yourselves up, and they did that in spurts. I think they were able to put some plays together. It’s only our third game and we’ll get there.”

Both teams are back in action tonight.

DuBois (3-0) travels to Brookville tonight, while DCC (1-2) plays at Johnsonburg.