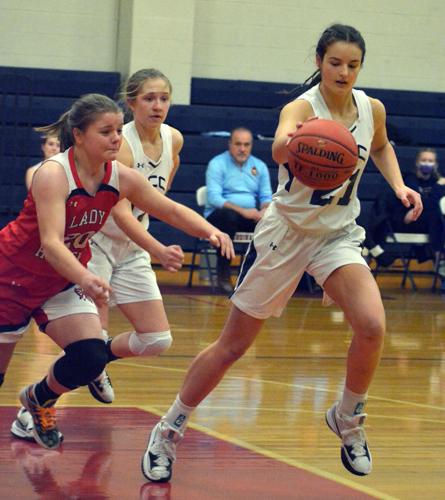 DuBois Central Catholic’s Faith Jacob (21) snags one of her 12 rebounds on Tuesday night against Cameron County. Jacob also had eight points as DCC went on to win 49-11. 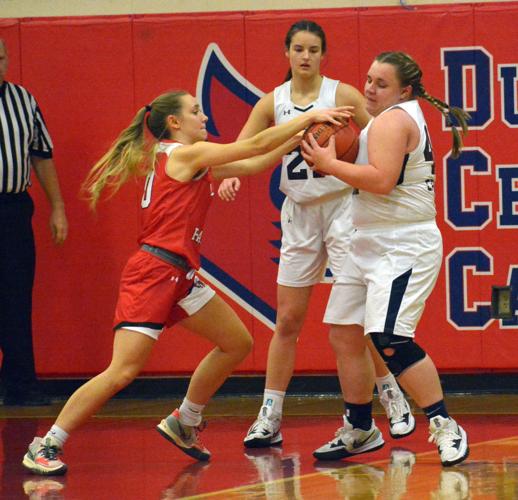 DuBois Central Catholic’s Rose Whipple (42) gets a steal off of Cameron County’s Mikenna Farabaugh (10) during Tuesday night’s game. The Lady Cardinals would go on to beat the Lady Raiders 49-11. 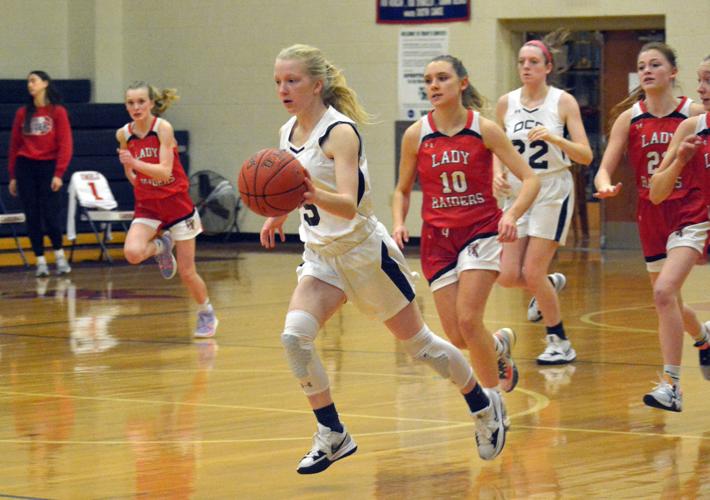 DuBois Central Catholic’s Faith Jacob (21) snags one of her 12 rebounds on Tuesday night against Cameron County. Jacob also had eight points as DCC went on to win 49-11.

DuBois Central Catholic’s Rose Whipple (42) gets a steal off of Cameron County’s Mikenna Farabaugh (10) during Tuesday night’s game. The Lady Cardinals would go on to beat the Lady Raiders 49-11.

DuBOIS — Any time you’re able to shut out a basketball team for an entire quarter, typically that bodes well for the final outcome. Such was the case on Tuesday night for the DuBois Central Catholic Lady Cardinals against Cameron County, as the Lady Cardinals opened up with an 18-0 first quarter en route to a 49-11 victory.

“When you start the game 18-0, we have such a young team,” DCC head coach Jordan Hoover said. “We have a lot of freshmen that have already played in critical moments, but it’s nice to get them out there for some extended run. And at times, I thought that was beneficial ... That’s what nice about having a lot of bodies that can play.”

Kayley Risser led the Lady Cardinals with 13 points, including being 5-of-6 from the foul line. Marina Hanes came off the bench and chipped in with 10 points. Jess Frank and Faith Jacob had eight points, as Jacob also snagged 12 rebounds.

Risser hit a few free throws to give DCC the early 3-0 lead before the Lady Cardinals picked up the pace as the first quarter saw six DCC players score points, led by Risser’s five and Jacob’s four. Jessy Frank’s basket gave DCC the 18-0 lead by the end of the first quarter.

Hanes then knocked down a jumper to extend the lead to 20-0 and Risser got a steal and layup to make it 22-0. But the Lady Raiders would then get on the board as Delaney Rowan grabbed a rebound and got the putback to get on the board at 22-2.

Cameron County scored nine of its 11 total points in the second quarter, with the Lady Cardinals scoring 15.

DuBois Central Catholic got the lead up to 29-5 before both teams traded points to end the second quarter with the Lady Cardinals holding a 33-9 lead.

To start the second half, Risser and Frank each made buckets underneath before Frank knocked down a jumper to make it 39-9. Hanes then hit a long two of her own to make it 41-9, as Hoover was pleased with her play on the night off the bench.

“Marina Hanes has been really, really consistently good all season,” Hoover said. “It’s nice to have a player that comes off the bench where there’s nothing that she really can’t do. She shoots it well. She’s an unbelievable passer and she can pretty much run any guard spot on our team. She gives us a lot of life in any game and even today, she shot the heck out of the ball.”

With the score 41-9, Lady Raider Aubree Lorenzo got to the charity stripe with 3:35 left in the third quarter and hit both of her attempts to make it 41-11 — as those free throws would be the last points on the night for Cameron County.

DuBois Central Catholic (4-3) led 45-11 at the end of the third quarter as Hoover was able to get the rest of the roster in the game for some experience, with the final buzzer eventually sounding for a 49-11 Lady Cardinals victory.

Hoover said it was a good all-around effort throughout the evening.

“We have some players that are really close,” Hoover said. “I thought Emma Elensky, who’s been practicing extremely well, tonight she got some good spots. And eventually some of the shots she’s making in practice will carry into the game. It’s an experience for the young kids as we continue to build. Since the A-C Valley game where we had a similar score, our schedule’s been difficult. It’s good to have this confidence booster going forward and we’re in a nice spot at 4-3. I think a game like this every once in a while is good ... for me to evaluate where some of these kids are at.”

DuBois Central Catholic is back in action on Friday evening as they will travel to play Elk County Catholic for a 7:30 p.m. tipoff.