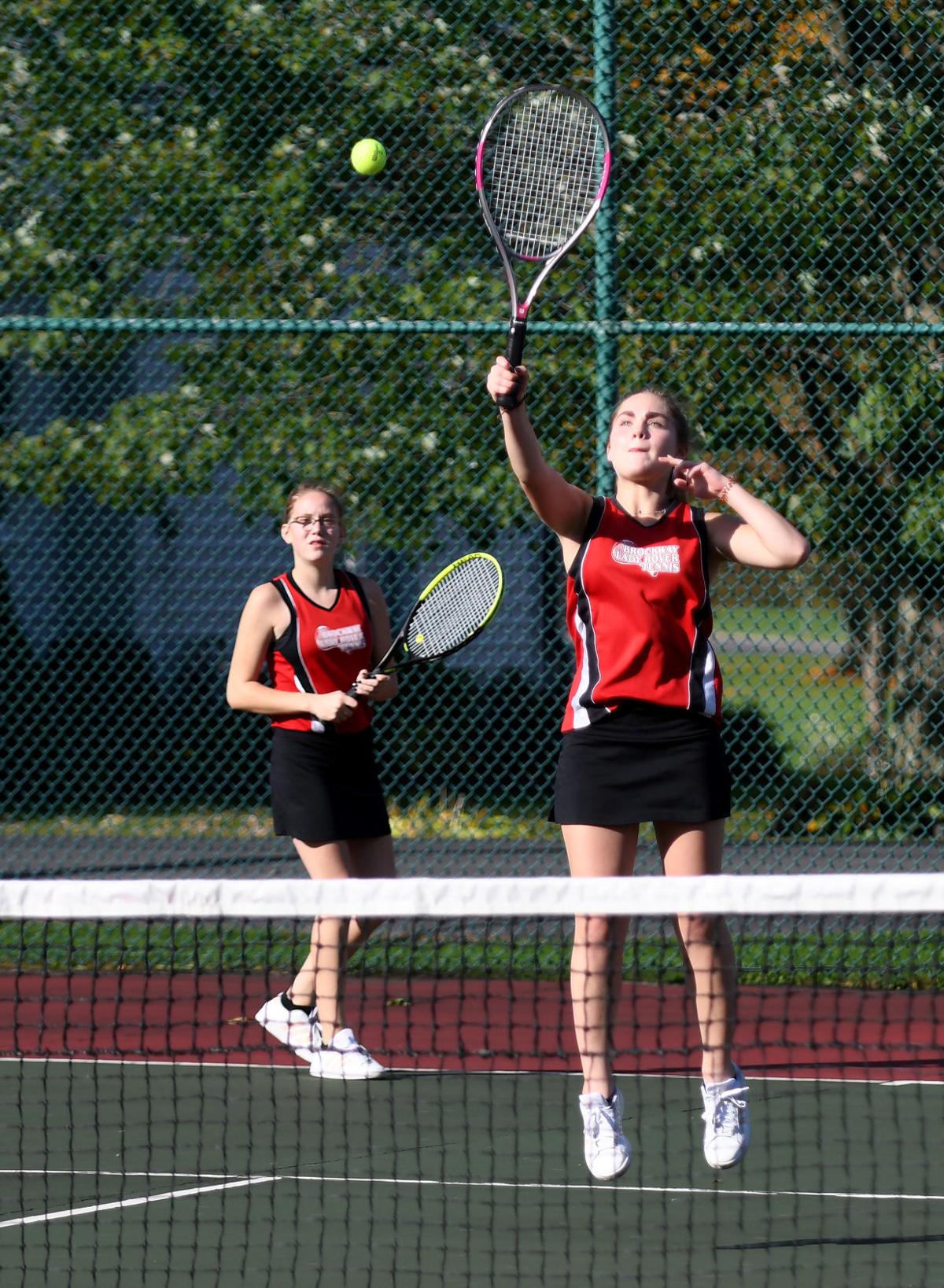 Brockway’s Emma Miller leaps to return a shot as partner Maci Dixon watches from the baseline during their No. 1 doubles match Wednesday in the semifinals of the District 9 Class AA Team Tournament. Dixon and Miller came away with a 6-4, 6-3 victory to help the Lady Rovers top the Lady Bison, 4-1, to reach the team finals. 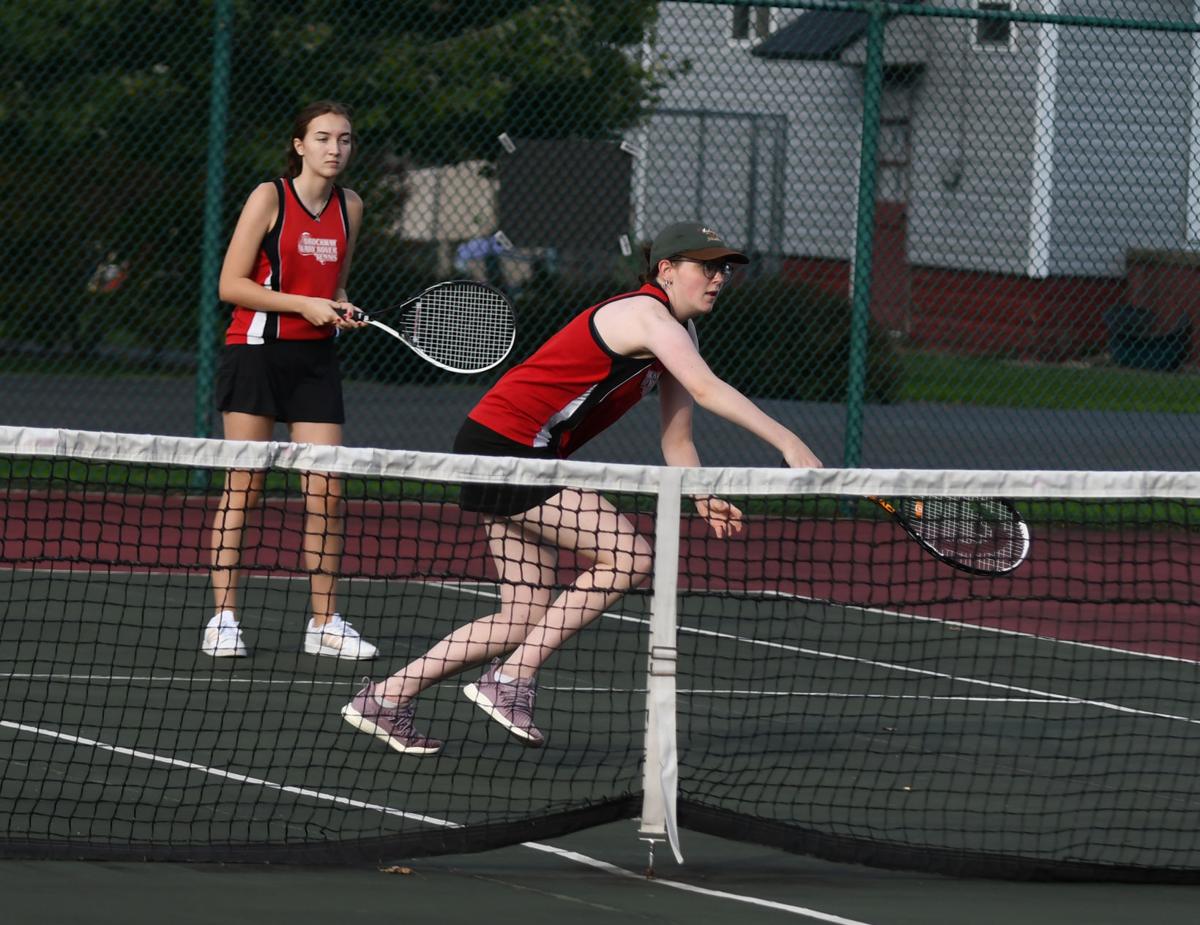 Brockway’s Sarah Koehler, front, hustles across the net to get to a ball as partner Leah Trunzo, back, lookson during their No. 2 doubles match Wednesday in the semifinals of the District 9 Class AA Team Tournament. Trunzo and Koehler teamed up for a 6-4, 7-6 (7-5) win to punctuate the Lady Rovers’ 4-1 victory.

Brockway’s Emma Miller leaps to return a shot as partner Maci Dixon watches from the baseline during their No. 1 doubles match Wednesday in the semifinals of the District 9 Class AA Team Tournament. Dixon and Miller came away with a 6-4, 6-3 victory to help the Lady Rovers top the Lady Bison, 4-1, to reach the team finals.

Brockway’s Sarah Koehler, front, hustles across the net to get to a ball as partner Leah Trunzo, back, lookson during their No. 2 doubles match Wednesday in the semifinals of the District 9 Class AA Team Tournament. Trunzo and Koehler teamed up for a 6-4, 7-6 (7-5) win to punctuate the Lady Rovers’ 4-1 victory.

BROCKWAY — The Brockway girls tennis team has turned back the clock to 2014 this week, accomplishing something they hadn’t done since that year — win a District 9 Class AA doubles title while also advancing to the finals of the team tournament.

Brockway achieved the first part of that scenario on Monday when senior Selena Buttery and junior Taylor Rhed teamed up to capture the doubles crown, the program’s first since Taylor Hepler and Anna Brinkley did so in 2014.

That duo then played a huge role Wednesday as the second-seeded Lady Rovers punch their ticket to the District 9 Class AA team Tournament finals with a hard-fought 4-1 victory against third-seeded Clearfield.

The last time Brockway had two district finalists (in either singles, doubles or team) was 2015 when then senior Zoie Reitz lost in the finals of both the singles and doubles (played with Gabby Sabatose) tournaments.

Brockway coach John Hawkins had some concerns entering Wednesday’s matchup against Clearfield, even with his squad being seeded higher and owning a win against the Lady Bison.

That first win came early in the season in late August and was a tight 4-3 triumph using regular-season rules where players can compete in singles and doubles. Clearfield actually won three of the four singles matchups that day, but Brockway won all three doubles and No. 4 singles to pull out the team win.

However, in the team postseason, singles players are not permitted to play doubles in the five match format (3 singles, 2 doubles) used. That format in itself was going to be an issue for Brockway, as seven players are needed and Brockway played all year with just six.

That changed late in the season, though, as the team members recruited senior Sarah Koehler to join the squad. Koehler, who had never played tennis before, spent last couple weeks getting in the necessary practice time under PIAA rules while learning as much about the game as she could to be ready for districts.

That time was well spent as Koehler joined forces with junior Leah Trunzo to notch a win at No. 2 doubles to give Brockway a bonus win it may not have expected.

That victory proved be the icing on top of what was a huge win for the Lady Rovers — one that saw their top two players (Buttery and Rhed) flip singles losses to wins against their Clearfield opponents from the first matchup. Without at least one of those, the Lady Bison would have went home with a 3-2 victory.

With four of the five matches on the courts at the same time to start, Clearfield got the first win of the day on the lower courts when Lauryn Kitchen beat Hannah Zuccolotto, 6-3, 6-0 at No. 3 singles. Kitchen also beat Zuccolotto in the first meeting.

That proved to be the Lady Bison’s lone win of the day though.

Buttery put up Brockway’s first point when she bested Lindsey Kerlin, 6-4, 6-3 at No. 1 singles on the upper courts, avenging a third-set super tiebreaker loss to the Lady Bison in August match.

The Lady Rover duo were down 5-4 in the opening set before winning three straight games to take the set and continued to roll from there. The pair didn’t play doubles together in the regular season, as Dixon usually played with Zuccolotto and No. 2 and Miller with Trunzo at No. 3.

While that match was finishing up, there was a long delay in the No. 2 singles contest on the upper courts after Clearfield’s Peyton Reese rolled her ankle during the second set of her match against Rhed.

Rhed had won the opening set and was reportedly leading 3-1 when the injury happened. Reese was eventually able to continue, and it was Rhed who went on to win the set, 6-2, to seal not only her win but an overall victory for Brockway with its third point.

The No. 2 doubles match was already in the second set when Rhed’s match-clinching victory happened, so that coaches decided to let the two teams finish off their match even though the final outcome was decided.

Trunzo and Koehler had already won a close first set, 6-4, and completed the sweep in an even tighter second set, 7-6 (7-5) to secure a win for Koehler in her first-ever match.

Koehler’s performance Wednesday was part of a whirlwind week for the Lady Rover, who named Brockway’s Homecoming queen last Friday night at the football game against Elk County Catholic.

“It was a great night for our girls,” said Hawkins. “I’m very proud of Selena and Taylor for beating their girls, especially since they lost to them in the regular season. It was also great to get the doubles a couple of wins. Maci and Emma have improved tremendously throughout their careers and it showed tonight.

“We have to give a huge shout out to our No. 2 doubles tonight. Leah Trunzo played well and her partner Sarah, who decided to take up tennis four weeks ago so we would not have to forfeit matches at districts. I have to give her a ton of credit for coming out for the team. She has surprised us at how she has picked up on the game.

“This win felt great to get. It has been a long time since we have been in numerous championships. We are extremely proud of our girls for the dedication and hard work they put in this season. Who knew we would be able to accomplish so much with just 7 girls on the team.”

Next up for Brockway is a showdown with top-seeded St. Marys in the team finals on Monday. The Lady Dutch beat fourth-seeded Punxsutawney in the other seminal on Wednesday.