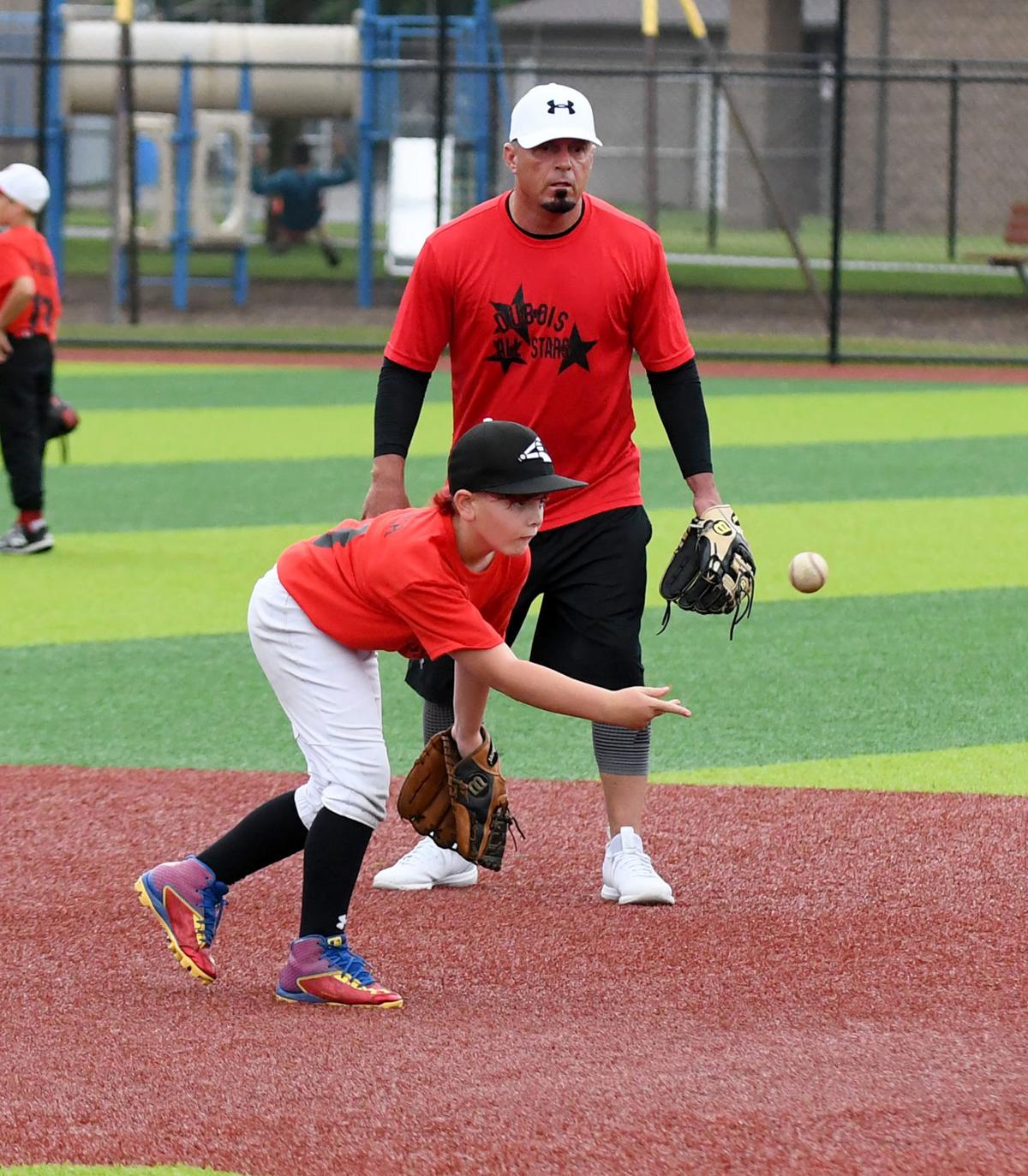 DuBois Minor League manager Jude Lander, back, looks on as his son Locke Lander flips the ball to second base during infield drills at a recent practice. Lander, who was a member of the 1986 DuBois Senior League All-Star team that went to the World Series, is involved in All-Star play on the field for the first time since then in his manager’s role this summer. 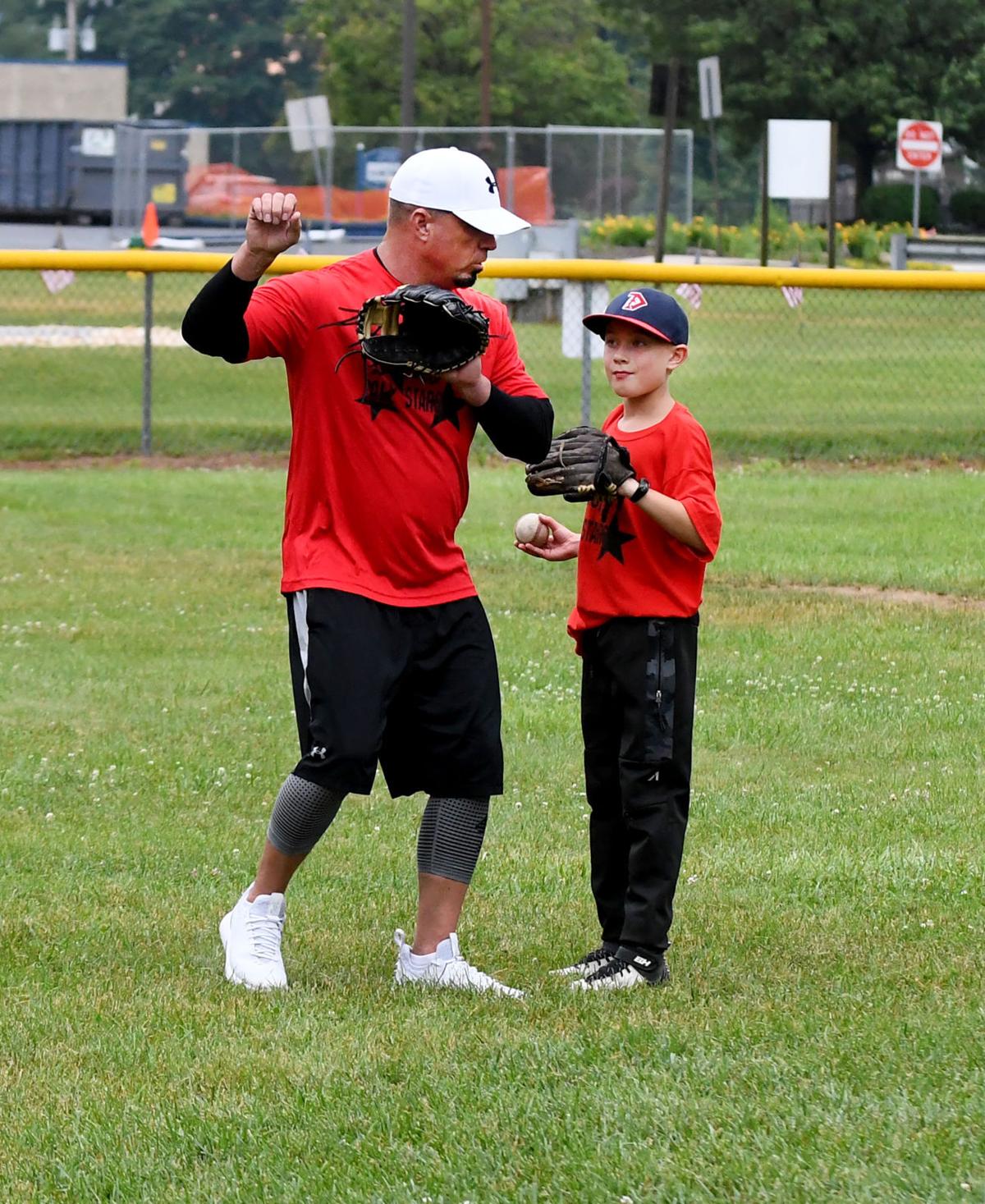 DuBois Minor League manager Jude Lander, back, looks on as his son Locke Lander flips the ball to second base during infield drills at a recent practice. Lander, who was a member of the 1986 DuBois Senior League All-Star team that went to the World Series, is involved in All-Star play on the field for the first time since then in his manager’s role this summer.

This summer marks the 35-year anniversary of the 1986 DuBois Senior League All-Star baseball team reaching the World Series, and a member of that team — Jude Lander — is set to embark on his first All-Star experience in the dugout since then only now as a manager.

Lander was the starting shortstop and also pitched for the 1986 Senior League squad that won both the Pennsylvania state title and East Regional crown before moving on the Senior League World Series.

DuBois went 2-2 at the World Series, finishing second among the United States teams and fourth in the World. Lander notched a win on the mound in a losers’ bracket victory against a team from Las Vegas (USA West) before DuBois bowed out of the tournament with a loss to Panama City, Panama (Latin America), which moved on to the World Series championship.

That World Series squad featured some big baseball names from DuBois, including current DuBois Little League President Scott Frano, was who played center field and was the team’s leadoff hitter.

Frano, Lander and Maietta hit back-to-back-to-back home runs in a sectional win against Ford City in DuBois that year, while Lander also had the game-winning hit in the state championship game.

That Senior League All-Star squad, like so many others during that time period, were led by manager Tom Frank and assistant coach Jerry Pine — both of whom Lander credits with helping him become the person he did, both on and off the field.

“We had a good run, and I wish every kid could experience that,” said Lander. “It was an unbelievable experience. And those two coaches (Frank, Pine) taught me more than baseball, and I truly owe them a huge thank you. There isn’t a day I don’t step on a baseball field and don’t think of these two coaches who gave me so much and allowed me to be a key part of this 1986 team.

“We played a lot of baseball across the country and played for a lot of coaches, but truly there were no one better than these two. We were so lucky to have these coaches because there is no way we could have got to where we did without them ... no way.

“They were good cop, bad cop style. Tom Frank was the tough one who would break you down, and then Jerry Pine would be the guy who picks you up and gives you a hug. When Jerry yelled, you knew something bad happened ... that wasn’t his style. Mr Frank was tough, but I loved it. I wouldn’t have wanted it any other way. He made me a tough-nosed ball player and made me learn something every time I stepped on a ball field.”

Fast forward 35 years, and Lander now finds himself in the position Frank and Pyne were for so long as he will manage a DuBois All-Star team for the first time. His Minor League All-Star baseball team, which features his youngest son Locke, begins District 10 play tonight at Brookville.

Lander, who also has an older son Lake who played All-Star and and a daughter Lynx, who is currently on the DuBois Junior softball All-Star squad, has been involved in coaching their league teams in the past, as well as Locke’s Scotty’s Donuts squad now that fresh off winning the league championship (11-1 record).

However, this is Lander’s first time helping or managing an All-Star team, and he is bringing with him some of those things he learned many years ago from Frank and Pyne.

“I still teach/coach some of his (Frank’s) style to my own kids and players,” said Lander. “That’s the sign a of a great coach when you copy them. Mr Frank always said easy doesn’t win games — that may be why we had three-a-day practices.”

Having his son Locke, who looks looks to play shortstop as well, on the team only makes things that more special for the elder Lander.

“Thirty-five years ago the roles were reversed,” he said. “I was the one playing in the All-Stars, and now my role is as a manager for 13 young ball players for the DuBois Minor League All-Stars. It’s special to do what I did and now do this with my son.

“He’s probably going to play short for us, and that’s where I played. That’s his position and where he’s best at. So, it’s kind of neat and hard at the same time because he’s my son, yet he’s a player. I’m hard on him, I’m not going to lie, but he he’s doing good and I’m trying to be coach and just not dad and treat him fair.

“It’s nice to coach and be able to have your son play as well. I never dreamed of that, but it’s just a great feeling. Any dad who has done it feels the same way I’m sure.”

Lander hopes his own experiences can help him guide the current set of All-Stars.

“I know what they (kids) will go through and their thoughts but being a manager is a totally different role. It won’t be about me, it will be about the players and focusing on playing one game at a time.

“I have many different puzzle pieces to put together and find the right fit. There also are a lot of different rules now that we didn’t have back then. So, that’s something I constantly have to pay attention to. We have a lot of pitching and speed (on the bases) too. We have some young kids who can really run. I think we’re faster than any young team like this that I’ve seen.

“We will play a ‘team concept’ where a lot of parts are interchangeable, but will play with a lot of unity. We went with 13 kids (on roster) because I think that makes things a little easier. The four kids who are on the bench (to start the game) will have key roles and not just be kids I need to put in. Everybody is going to play a part on this team, not just be one or two people. It’s going to take a team to win.’

“It’s nice to give back now,” added Lander. “I learned a long time ago, and I’ve told the kids this, is the name on the front of the jersey is more important than the one on the back. You’re presenting DuBois now, so when put that jersey on, you’re just not playing for yourself but a team and the whole community. They will back you.”

The fans will get their first chance to do so this evening in Brookville.