Skip to main content
You are the owner of this article.
Edit Article Add New Article
You have permission to edit this article.
Edit
Welcome, Guest
Our Network
Home
News
Sports
Obits
Multimedia
Opinion
Living
Classifieds
+ More
Share This
1 of 4

Penn State DuBois’ Thayne Morgan steals second base as PSU Mont Alto’s Jared Pine tries to field the throw during the PSUAC if-necessary championship game Monday night in State College. Morgan was 2-for-3 with the steal in a 3-0 loss that gave Mont Alto’s the title. 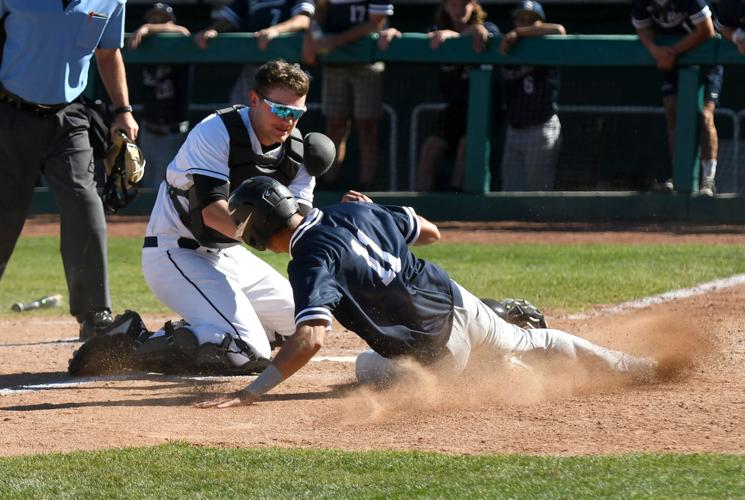 Penn State DuBois catcher Cory Lehman, back, tags out PSU Mont Alto’s Darian Mort as he tries to score on a double by teammate Hayden Kissel during the first PSUAC title game Monday. Mort was gunned down on a strong relay throw by shortstop Colby Bodtorf. 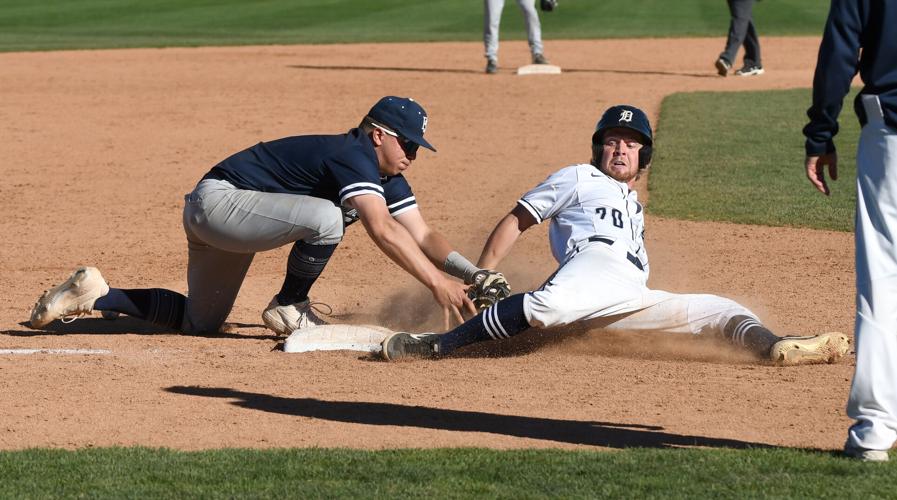 Penn State DuBois’ Tyler Yough (20) tries to stay on the bag as he slides around the tag attempt of PSU Mont Alto’s Tyler Moreland during sixth-inning action in the opening PSUAC title game Monday. Yough was safe on the play as Moreland dropped the throw as he went to make the tag. Yough had two hits in a 4-2 loss. 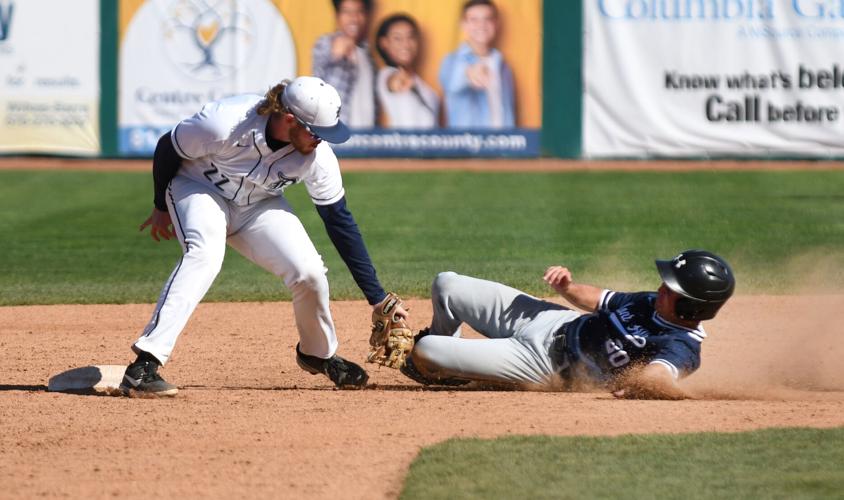 Penn State DuBois’ Thayne Morgan steals second base as PSU Mont Alto’s Jared Pine tries to field the throw during the PSUAC if-necessary championship game Monday night in State College. Morgan was 2-for-3 with the steal in a 3-0 loss that gave Mont Alto’s the title.

Penn State DuBois catcher Cory Lehman, back, tags out PSU Mont Alto’s Darian Mort as he tries to score on a double by teammate Hayden Kissel during the first PSUAC title game Monday. Mort was gunned down on a strong relay throw by shortstop Colby Bodtorf.

Penn State DuBois’ Tyler Yough (20) tries to stay on the bag as he slides around the tag attempt of PSU Mont Alto’s Tyler Moreland during sixth-inning action in the opening PSUAC title game Monday. Yough was safe on the play as Moreland dropped the throw as he went to make the tag. Yough had two hits in a 4-2 loss.

Penn State DuBois won three titles in that four-year stretch, with the 2020 season being canceled because of COVID-19. However, the conference has a new top dog this year as Mont Alto used DuBois’ recipe for success — strong pitching and defense coupled with timely hitting — to upend the reigning champs by scores of 4-2 and 3-0.

DuBois entered the day as the lone undefeated team left in the tourney after beating Mont Alto, 4-0, on the opening weekend and PSU Brandywine, 2-0, Sunday at Showers.

DuBois struggled to come up with a key all day long as a pair of Mont Alto pitchers held the defending champs to just two runs on six hits between the two games as Mont Alto finished completed the long tourney back to capture the title.

Mont Alto won four straight elimination games between Sunday and Monday to win its first PSUAC title since 2017, which is the last year Penn State DuBois wasn’t the conference champions.

Both teams had already earned bids to the USCAA Small College World Series Sunday night before the championship games were played. Penn State DuBois, the three-time reigning USCAA champs will be the No. 1 for this year’s event, while Mont Alto is the No. 3 seed.

“First off, their (Mont Alto’s) pitchers were outstanding,” said Penn State DuBois coach Tom Calliari. “But, i also think we did a very poor job in fastball counts. I thought our guts were just pressing a little bit, but at the same time they did a great job.

“They found the holes when they had runners in scoring position today, and we did not. They beat us at our own game, pitching and defense. They outpitched us today, and that’s just baseball.”

Monday was all about Mont Alto’s Trystan Housman and Matt Huston, who combined to throw all 14 innings and silence the Penn State DuBois offense.

Housman started Game 1 and held DuBois scoreless through five innings as his team built him a 4-0 lead.

DuBois actually threatened first, getting back-to-back singles from Cory Lehman and Tyler Yough in the bottom of the first. However, Housman responded with a strikeout and groundout to strand both.

Mont Alto then grabbed the lead in the second against DuBois starter Nolan Walters and did so with two outs as Johnathan Lentvosrsky and Jarrett Goodyear hit back-to-back singles. Gavin Kissel made it three hits in a row as his single to left-center chased home courtesy runner Brady Cullen to make it a 1-0 game.

Mont Alto threatened again in the second when Darian Mort singled with one out and Hayden Kissel followed with a double to deep left field. However, Brandon Sicheri made a strong throw to cutoff man Colby Bodtorf, who fired home to get Mort as he tried to score.

That spelled the end for Walters, though, as DuBois went to Morgan Bell on the mound. He promptly got a strikeout to end the inning.

Housman then tossed a strange scoreless bottom of the third, one that saw him hit two batters and walk another. But, a double play helped clean up the inning for Mont Alto, which added to its lead in the fourth on a RBI single by Goodyear.

Mont Alto pushed the lead to 4-0 in the fifth on a clutch two-out, two-run single by Caiden Smith.

DuBois finally got to Housman in the sixth, scoring a pair of runs off the lefty.

Lehman got things started with a leadoff walk and was replaced on the bases by courtesy runner Cole Breon. Yough followed with a double to put two runners in scoring position for pinch-hitter Bryce Dobson, who plated Breon on a sac fly to right.

Yough scored two batters later on a groundout to make it 4-2 before pinch-hitter Gavin Zoelle and Thayne Morgan drew walks to load the bases with two outs.

Mont Alto then went to the bullpen and called on Huston, who got Bodtorf to fly out to center to end the inning and DuBois’ final threat in the opening game.

Housman got the win after allowing two runs, one earned, on three hits in 5 2/3 innings. He struck out three, walked five and hit three batters. Huston tossed the final 1 1/3 to earn the save.

Mont Alto decided to continue to ride Huston in Game 2. and he didn’t disappoint his side as he and Trevor Hanna battled in out on the mound.

Hanna held Mont Alto in check through five innings, allowing just a pair of hits and two walks. Mont Alto didn’t have a runner get past second in those first five innings.

Huston had to do a little more work to keep the game scoreless and got out of a major jam in the bottom of the third.

DuBois loaded the bases with one out on a Bodtorf single and a pair of hits batsmen (Stauffer and Lehman). However, Mont Alto cut down a run at the plate on a grounder off the bat of Young before Huston got Hanna to ground out to leave the bases loaded.

Huston then stranded Thayne Morgan at second in the fourth after he singled with one out and stole second. But, the big escape came in the fifth.

Bodtorf led off the inning with a second, then hustled around to third on a failed pickoff attempt by Huston with no outs. Bodtorf never left third though, as Huston first got a huge strikeout of Dan Stauffer.

Shortstop Jared Pine then dive to his right with the infield playing up to snag a liner off the bat of Lehman for the second out. The infield then went back to regular depth and Pine tracked down a grounder in the hole and fired across the diamond to get Yough to end the inning.

Mont Alto carried that momentum into the top of the sixth and finally got to Hanna to grad the lead.

Caiden Smith led off with a walk and was bunted to second. DuBois then intentionally walked Lentvorsky to set up a double play, but Goodyear hit a RBI single to right to score Smith.

That spelled the end for Hanna, as DuBois went to Stauffer on the mound.

Gavin Kissel stepped in and put down a bunt. Stauffer looked the runner back to third, then slipped as he went to turn towards first as Kissel reached safely to load the bases.

Brady Bigler then delivered the big blow. a two-run single to center to make it a 3-0 game.

That proved to be more than enough for Huston, who tossed a four-hit shutout after throwing the 1 1/3 in the opener. He struck out two and walked none in the title-clinching victory.

Both teams will now get ready for the World Series, which begins May 16 at Showers Field.

“We have to turn the page very quickly,” said Calliari. “We’ll take the day off (today) and get back at it this week and get back to swinging the bats and having a better approach at the plate.

“People have to realize we have a very young baseball team. Everybody expects us to win everything all the time, and we put ourselves in position to win again. But, a majority of the guys in the field have never been in this situation. So, to put themselves in position to be right there says a lot about the talent of the younger guys. It was just experience won out today.”