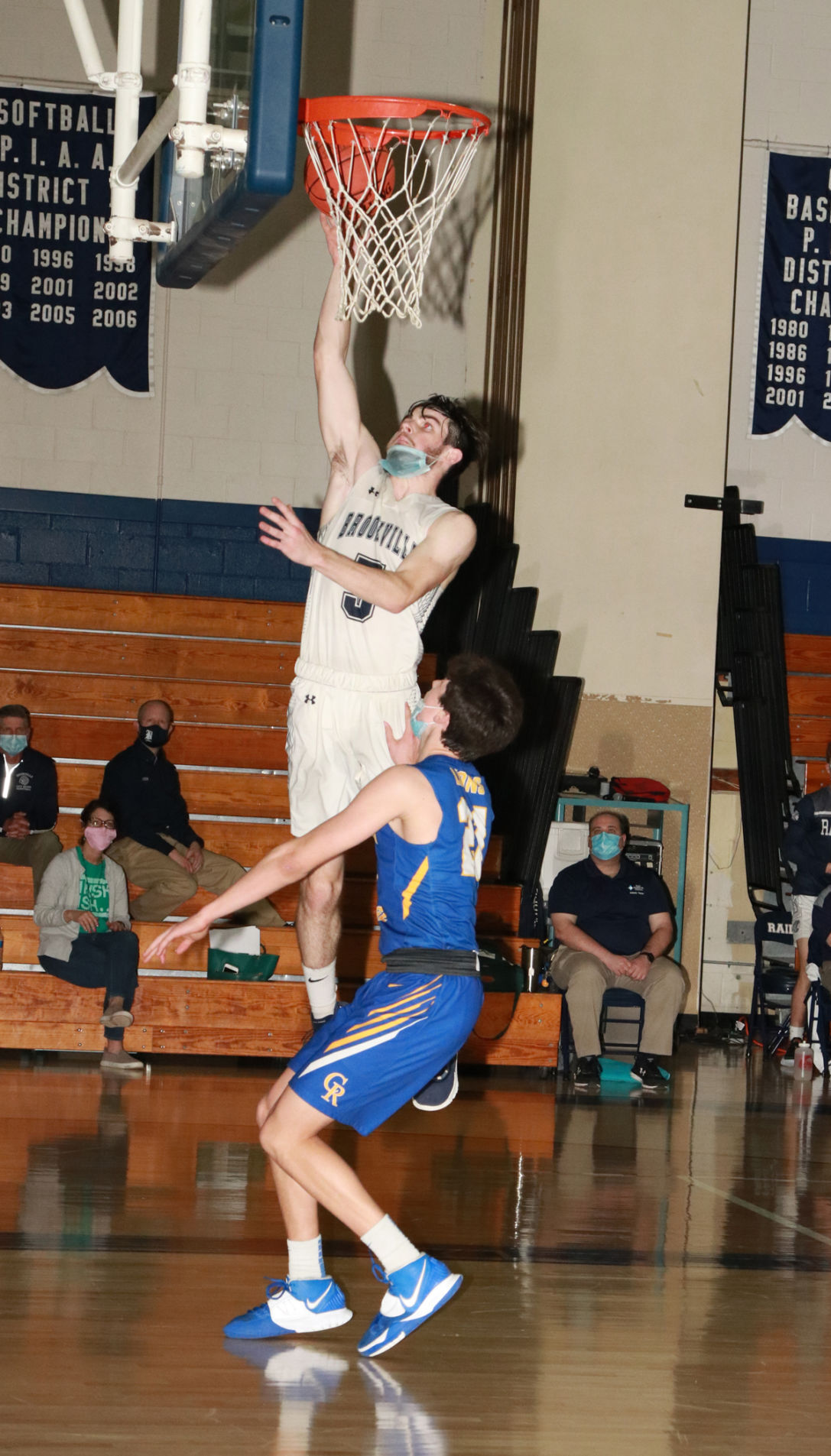 Brookville’s Hunter Geer goes up for a layup in the fourth quarter that put the Raiders up 58-50 with just over four minutes remaining. Geer scored eight points in the Raiders’ win over Chestnut Ridge. 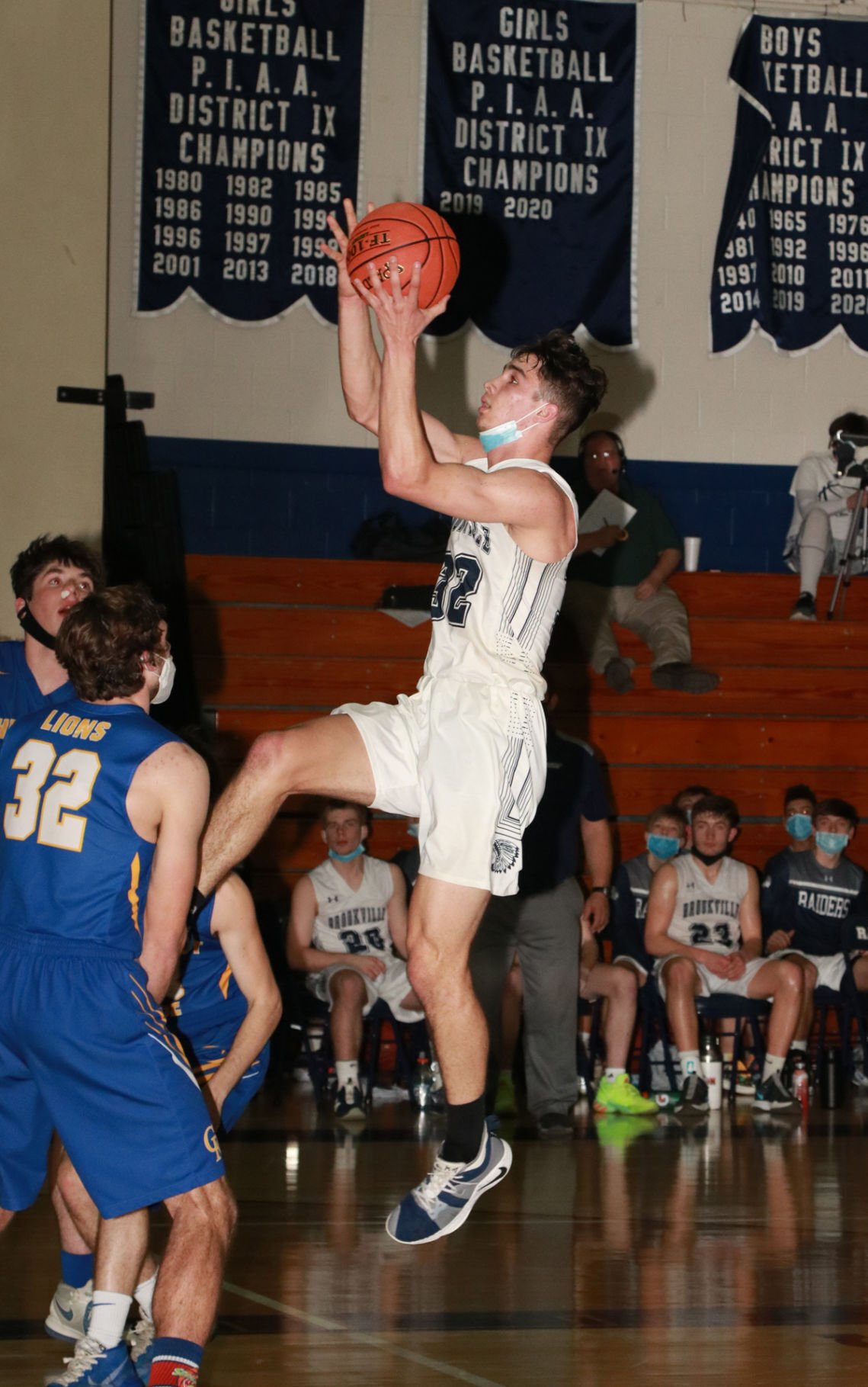 Brookville’s Jace Miner scored 16 of his 27 points in the fourth quarter, leading the Raiders to a 68-58 win over Chestnut Ridge in Wednesday’s District 5/9 Class 3A Sub-Regional Championship game. Miner made his final nine shots from the field and added 11 rebounds, going over 900 career points. 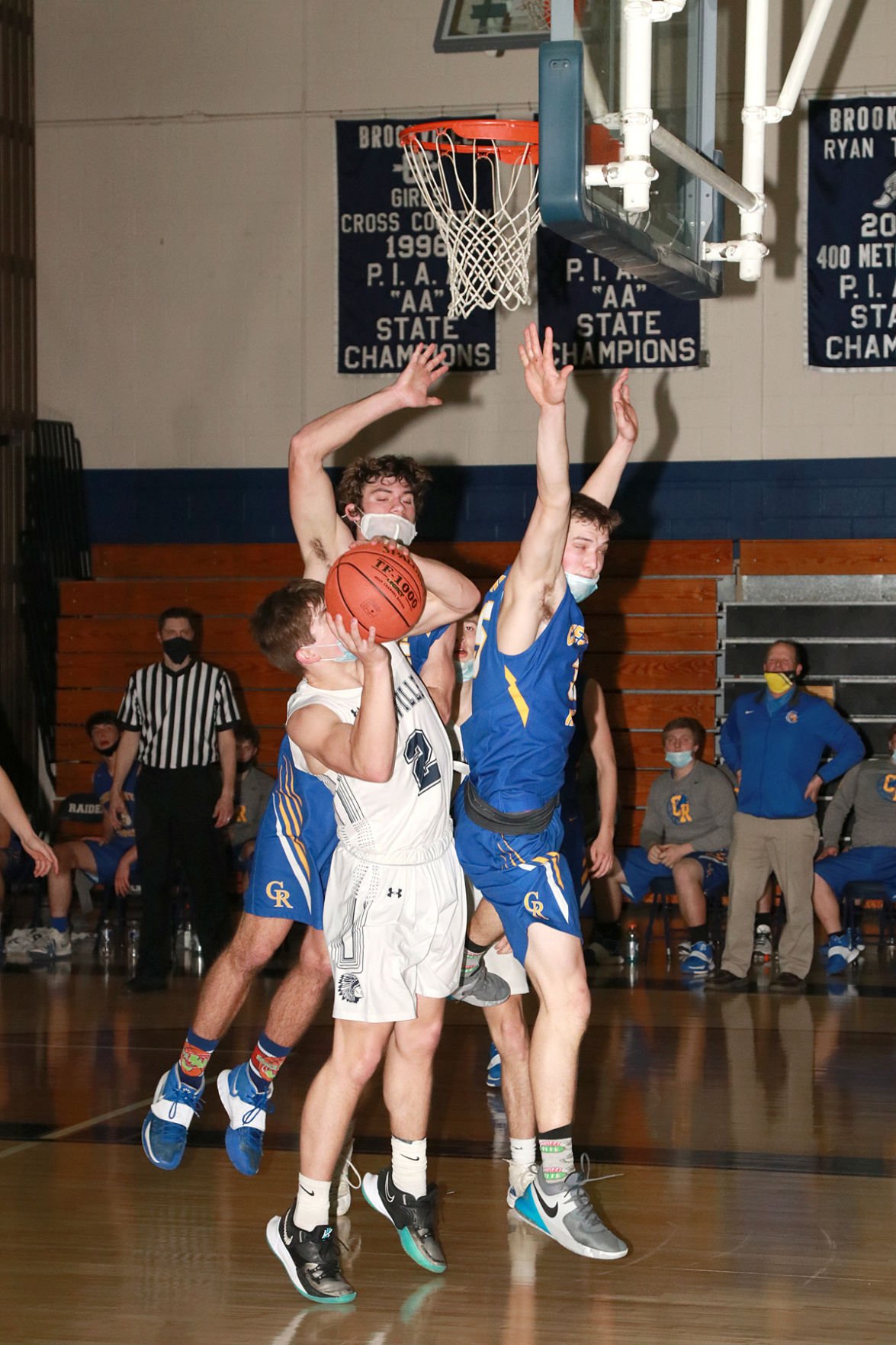 Brookville’s Hunter Geer goes up for a layup in the fourth quarter that put the Raiders up 58-50 with just over four minutes remaining. Geer scored eight points in the Raiders’ win over Chestnut Ridge.

Brookville’s Jace Miner scored 16 of his 27 points in the fourth quarter, leading the Raiders to a 68-58 win over Chestnut Ridge in Wednesday’s District 5/9 Class 3A Sub-Regional Championship game. Miner made his final nine shots from the field and added 11 rebounds, going over 900 career points.

BROOKVILLE — With his team on the verge of going down 10 points late in the third quarter, Brookville Raiders coach Dalton Park counted four Chestnut Ridge players standing on the court.

Moments later after mentioning that fact to one of the officials, the Raiders were on the line shooting their own set of free throws because the visiting Lions were called for technical after a player re-entered the court without first being beckoned on by an official.

So instead of the Lions having the ball up 10, the Raiders were down eight with the ball. That led to a Raiders 17-3 run that gave them the lead for good at 48-44 just under two minutes into the fourth quarter.

From there, Raiders senior guard Jace Miner took over and was unstoppable, slashing and driving his way to 16 of his 27 points in the fourth quarter in the Raiders’ 68-58 win over Chestnut Ridge in the District 5/9 Class 3A Sub-Regional Championship game, their third straight.

Next up for the 21-2 Raiders is a trip to the PIAA quarterfinals at WPIAL champion Ellwood City on Saturday. The winner hosts a state semifinal game next Tuesday against Saturday’s winner between Franklin and Bishop Guilfoyle.

Park downplayed the technical foul flurry as the turning point, instead praising his team’s ability to turn up the defensive pressure when it was needed most.

Park also admitted that he wasn’t real happy either with a no-call on a Miner drive to the basket that eventually led to Miner getting hit with a technical.

“I’m not 100 percent sure what all went down and whatever happened there,” Park said of the technical foul call. “The kid went on the floor without being called, if that was what the technical was for.”

The post-technical part of the game was the best the Raiders played, considering they were trailing by double figures almost through three quarters. The Raiders were 4-for-16 from the floor in the first quarter as Chestnut Ridge’s 1-2-2 extended zone defense led to nine first-half turnovers for the Raiders.

Chestnut Ridge head coach Don Ellis certainly wasn’t happy with how his team managed to draw the technical foul on a confusing stretch during the administration of the technical free throws after Miner was whistled.

“It changed the momentum of the game,” Ellis said. “It was a terrible call, a call that wasn’t needed. It was a call the other coach complained about and they were out there for 10 minutes. Both referees and the scorer’s table said both kids could go into the game. And that was the interpretation from our players.

“We’re not sure what happened. (The officials) had a meeting out there and we had to live with it. I was very unhappy with it and that was the only thing I was unhappy about the whole game. It just knocked the wind right of us. … They should’ve had a referee at the scorer’s table, but there wasn’t. They told Matt (Whysong) to go in and Lucas (Nicodemus) to go in and then the next thing I know we’re going to get a technical.”

Danny Lauer converted both techs and it was off to the races for the Raiders, who pushed it to eight at 55-47 after Robert Keth’s 3-pointer with 4:59 remaining and as many as 12 at 66-54 after two Griffin Ruhlman free throws with 2:04 left.

“I feel good because we did play our best basketball (and won) and we probably played a little down,” Park said. “But the heart, I thought the kids had the heart that was needed and we made a couple of adjustments late in the game I thought were very beneficial to helping us move ahead.

“So when you don’t play your best basketball and you’re down nine or 10 points and find a way to come back with heart, you have a good team, a bunch of kids of kids who want to play and play together and give you what it takes. I’m really happy with that. You can’t ask for anything more.”

Miner made 12 of 19 shots for his 27 to go along with 11 rebounds. He went over 900 career points and now stands at 921. Ruhlman and Keth scored 13 and 12 points respectively with Keth pulling down eight rebounds. Hunter Geer and Lauer each scored eight points.