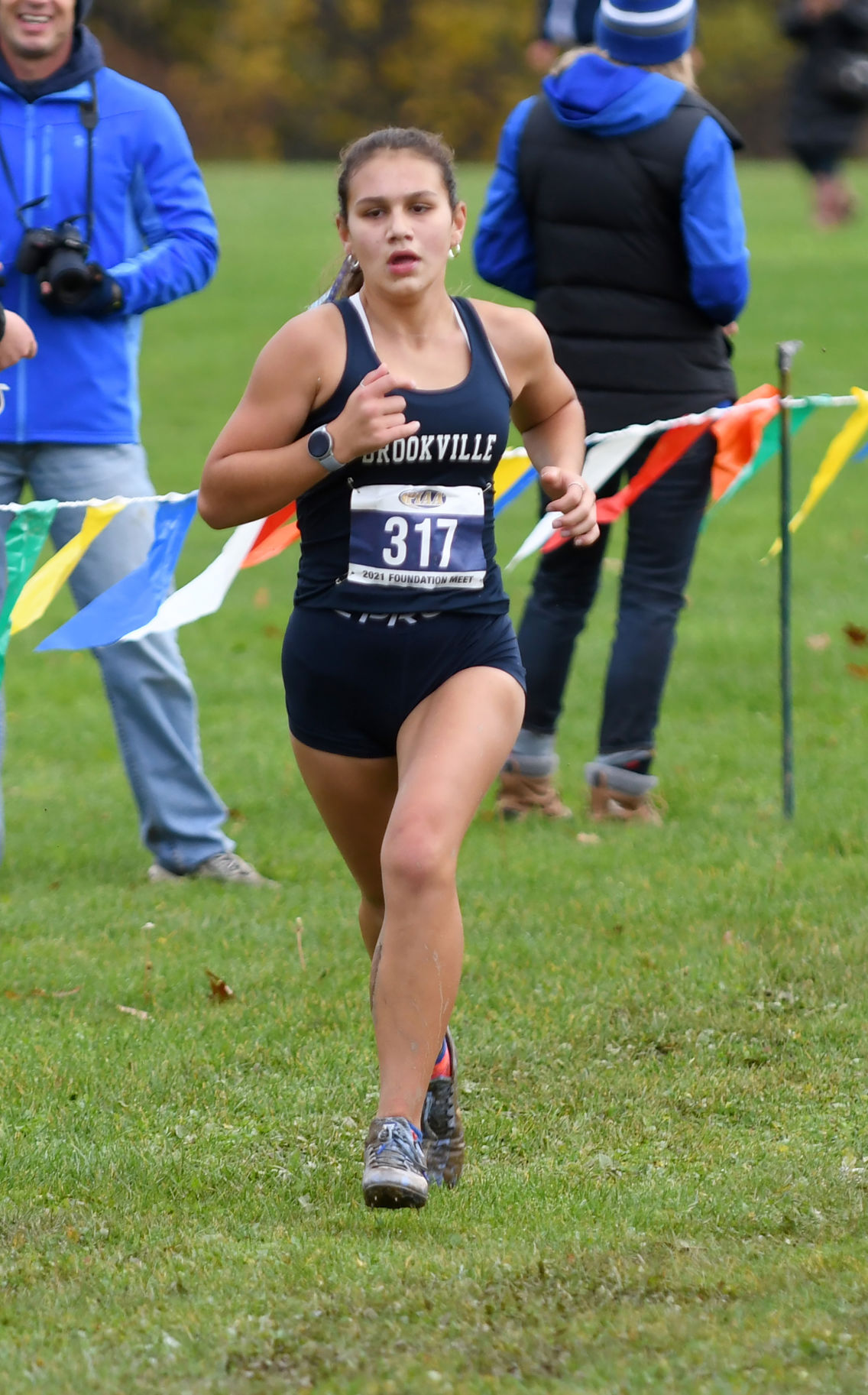 Brookville freshman Erika Doolittle piushes towards the finish line Saturday in the Class A girls race in Ridgway. Doolittle finished 11th to earn a trip to the state meet. 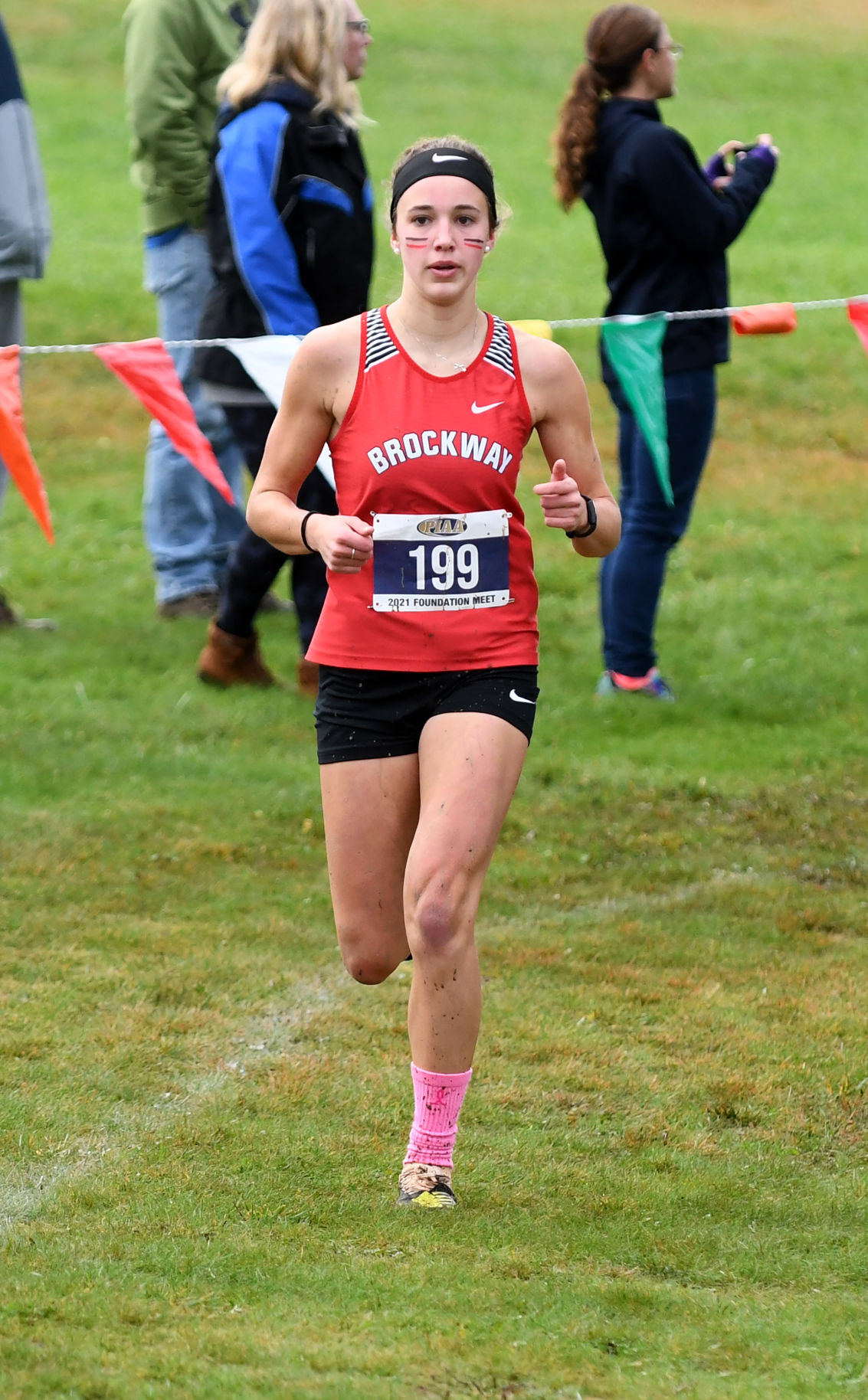 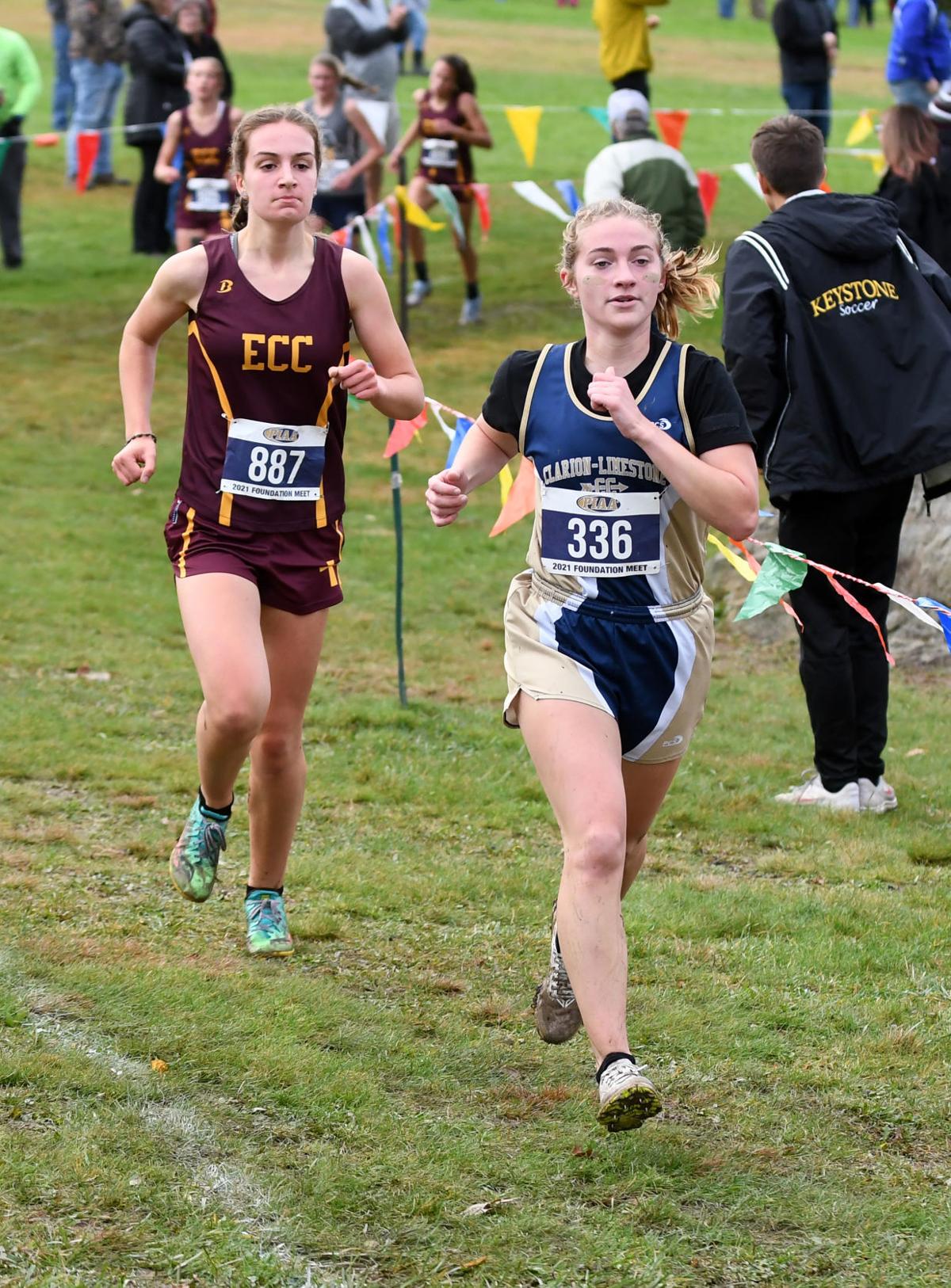 Clarion-Limestone’s Morgan McNaughton (336) and Elk County Catholic’s Grace Neubert (887) run together during the Class A girls race Saturday at the District 9 Cross Country Championships. Neubert eventually pulled away from McNaughton and finished second, while the Lady was fourth.

Brookville freshman Erika Doolittle piushes towards the finish line Saturday in the Class A girls race in Ridgway. Doolittle finished 11th to earn a trip to the state meet.

Clarion-Limestone’s Morgan McNaughton (336) and Elk County Catholic’s Grace Neubert (887) run together during the Class A girls race Saturday at the District 9 Cross Country Championships. Neubert eventually pulled away from McNaughton and finished second, while the Lady was fourth.

RIDGWAY — The Elk County Catholic girls cross country team came oh so close to winning the Class A team title Saturday at the District 9 Championships in Ridgway but still qualified its entire team to Hershey with a runner-up finish.

How close did ECC come to winning team gold? Well, a tiebreaker was needed to determine the team champion after ECC and Cranberry forged a 70-70 tie on the Francis S. Grandinetti Elementary School course.

Elk County placed three runners in the Top 7, led by sophomore Grace Neubert who took home a silver medal. However, Cranberry had it first four runners more tightly grouped to overcome those high finishes by the Lady Crusaders. The top five runners are used for scoring purposes.

In the end, the winner came down to which team’s No. 6 runner had the best and that proved to be Cranberry’s Alex Boley, who was 44th overall but 33rd among the girls on squads competing in the team competition. Elk County’s six finisher was Isabella Macer, who was 74th overall and 52nd for team purposes.

The outcome was a heartbreaking one for the Lady Crusaders in terms of winning a district championship, but they survived to compete as a team one more time this coming Saturday at the PIAA Championships in Hershey. Elk County was fourth a year ago in the team standings, while Cranberry was fifth.

They will be joined in Hershey by a trio of local runners who qualified as individuals, as the Top 10 runners not on the first or second place teams also were guaranteed berths to states.

Neubert headlined the local contingent as she continued her strong sophomore campaign.

Only Smethport senior Jenna Gregory (20:25) beat Neubert on the day as the Lady Crusader crossed the finish line in 20:47, which was nearly two full minutes faster than a year ago when she ran a 23:42 to finish 24th when the D-9 Championships were held at Brookville because of COVID-19.

Sophomore Teammates Sami Straub (21:01) and Sophia Bille (21:16) finished right after each other in sixth and seventh place, respectively. Straub also made a nice jump (1:14 faster) from a year ago when she was 13th at Brookville. Bille ran near identical times both years to finish seventh.

After that trio, ECC’s next runner to finsih was freshman Gianna Bille, who was 18th in 22:58. Caitlyn Vollmer closed out the ECC scoring with a 58th place (28:52) finish. Macer and Mara Lecker (79th, 35:47) rounded out the Lady Crusaders who competed.

McNaughton enjoyed a strong run, as she came away with fourth place (20:58), crossing the line just a second behind third-place finisher Hannah Burgood on Moniteau.

Doolittle placed 11th overall with a time of 22:19, while Schmader (22:33) was 14th just a second ahead of North Clarion’s Jordyn Hendrickson.

Those two collected the final two individual spots to states. Schmader is the Lady Rovers’ first state qualifier since Sylvia Pisarchick did it back-to-back years as a freshman and sophomore in 2016 and 2017 with a pair of eighth-place finishes.

Brockway nearly had a second state qualifier freshman Zoe Puhala (23:13) finished 19th overall and was the first runner out of the individual Top 10 behind Hendrickson. Schmader and Puhala led a strong team effort by the Lady Rovers, who finished fourth behind Cranberry, ECC and Brookville (99) with 103 points. Clarion-Limestone was fifth with 109.

Brookville had all five of its runners finish in the Top 40, with Doolittle being the only one in the Top 25.