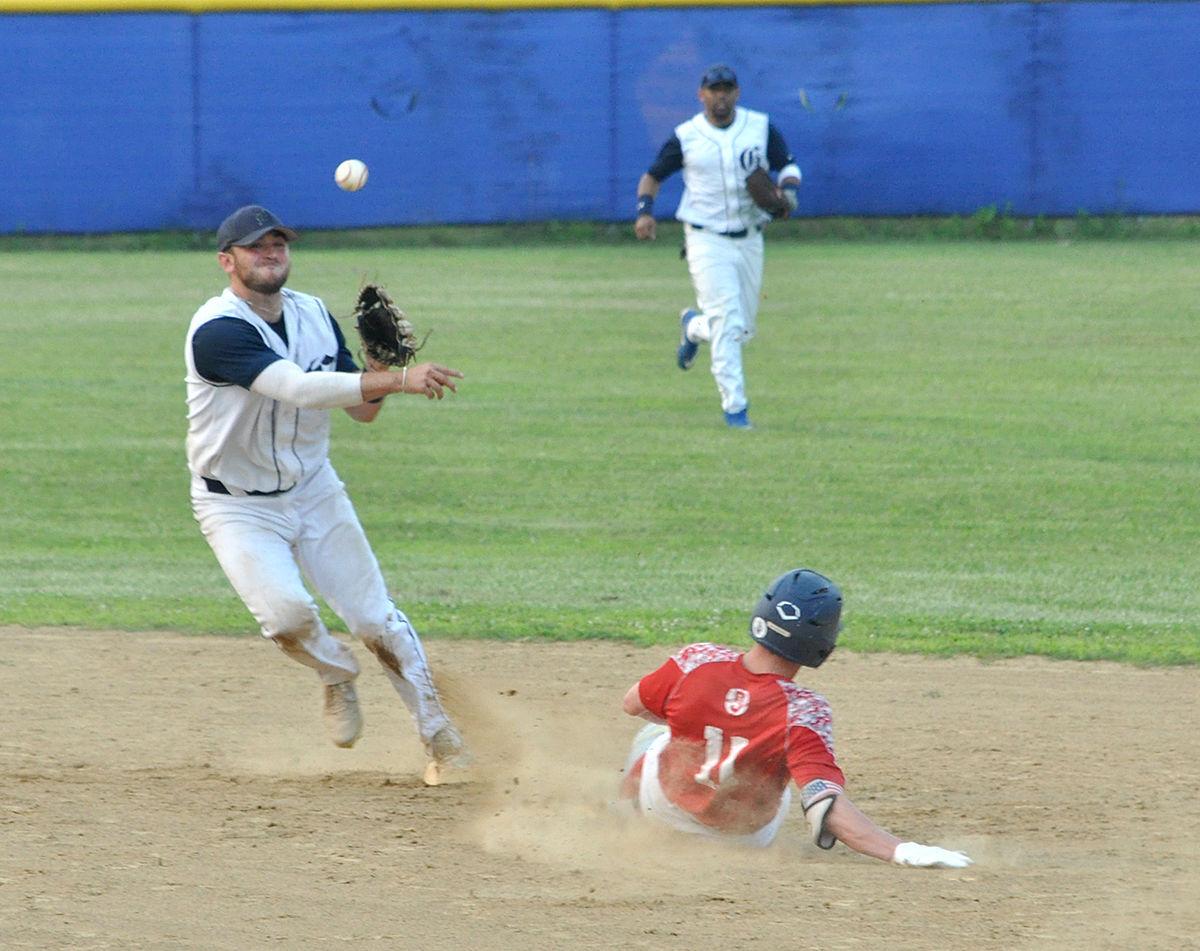 Brookville Grays shortstop Joey Lopez throws to first base after forcing out Daren Byers and finished off a double play in the fourth inning of Tuesday's playff game against Rossiter. The Grays took the opening game of the best-of-five Federation League playoff series, 8-0. 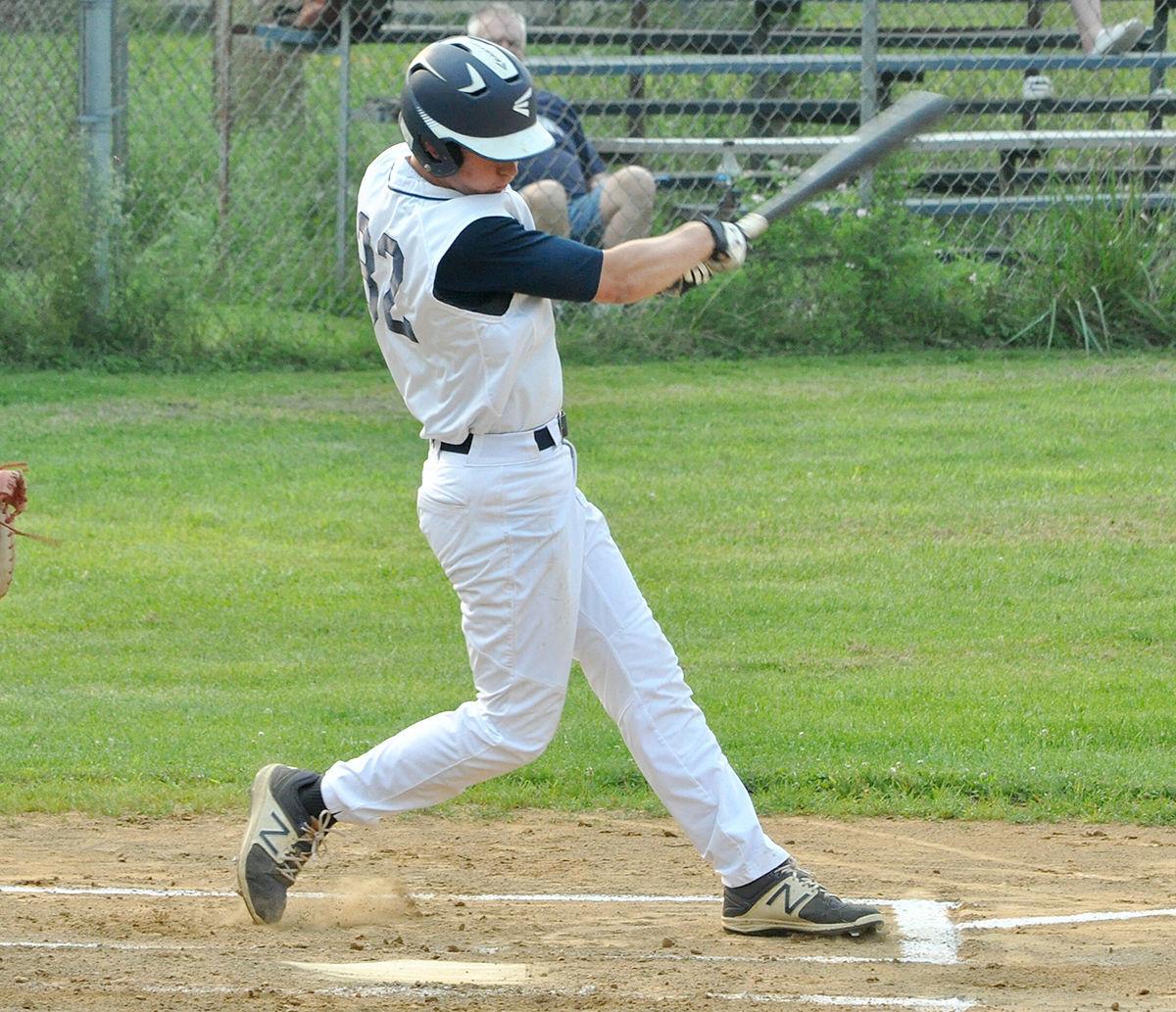 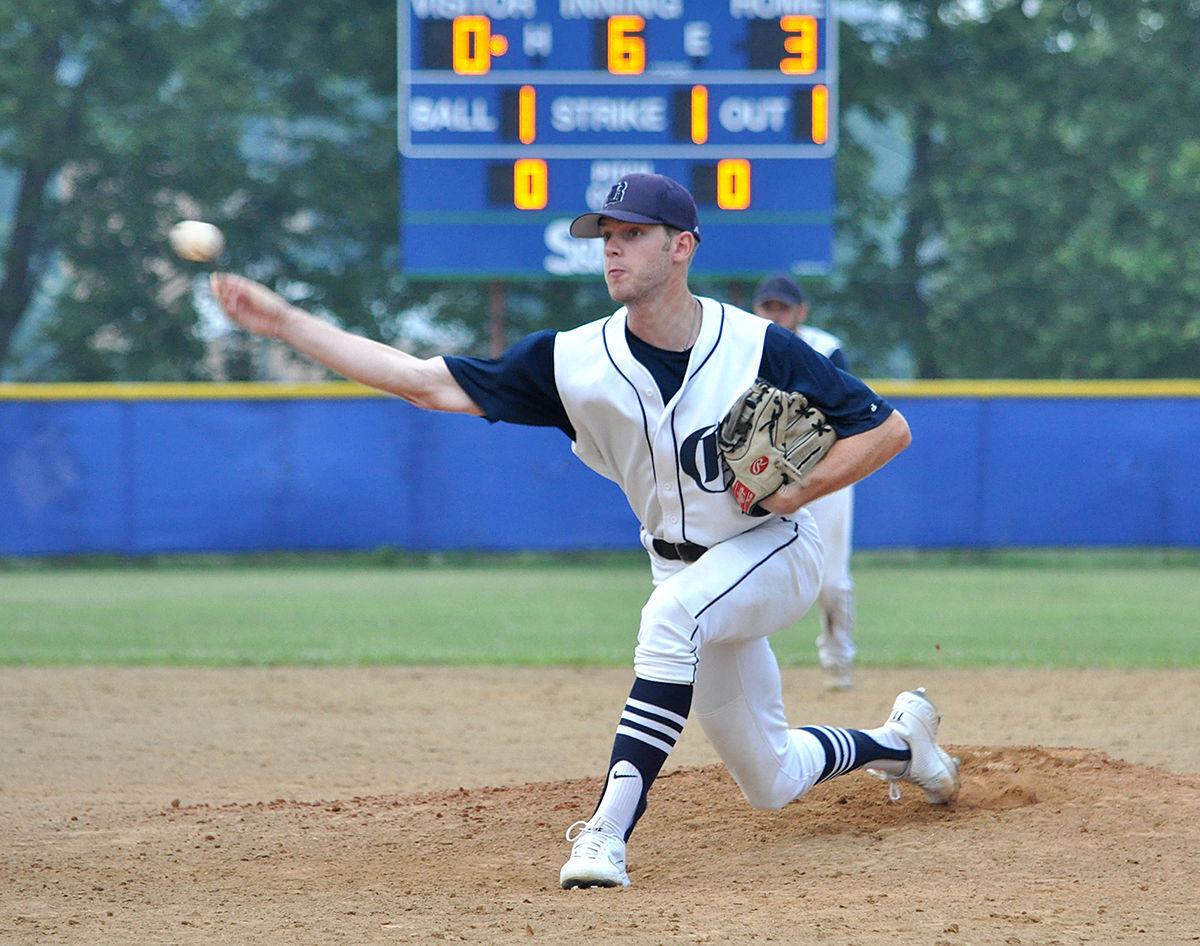 Brookville Grays shortstop Joey Lopez throws to first base after forcing out Daren Byers and finished off a double play in the fourth inning of Tuesday's playff game against Rossiter. The Grays took the opening game of the best-of-five Federation League playoff series, 8-0.

BROOKVILLE — He hadn’t pitched in almost a month, but Brookville Grays pitcher Thomas Plummer didn’t show many cobwebs on his right arm in Tuesday night’s Federation League playoff win over the Rossiter Miners at McKinley Field.

Plummer allowed just two hits over six innings while striking out six, walking two and hitting a batter as the Grays eventually put away the Miners with a five-run bottom of the sixth in an 8-0 win.

The best-of-five semifinal series continues Wednesday night at Shaffer Field in Rossiter with Game 3 set for Thursday back in Brookville at 6 p.m. weather-permitting. With no rainouts, the final two games, if needed, would be Saturday in Rossiter and Sunday in Brookville.

In the other semifinal, the defending champion and top-seeded DuBois Rockets edged Sykesville, 8-7.

It was only Plummer’s fourth outing of the year, his work schedule and rainouts limiting his opportunities.

“I felt like I hadn’t thrown in a month because I usually throw Tuesday and every game would get rained out, so I knew my arm would be fresh enough to go,” said Plummer, who last pitched in a 10-6 win over Sykesville in Reynoldsville on June 27. “Meek (catcher Jake Meeker) and I mainly focused on throwing fastballs as much as we could through the lineup the first time, then mixed in some sliders and changeups from there. I just kept the ball down and the guys made plays and the defense was great tonight.”

Plummer retired the first nine batters he faced with four strikeouts, then after giving up a one-out single to Daren Byers in the fourth, he got an inning-ending double play ball out of Pete Meterko.

In the top of the sixth, the Miners loaded the bases again with two outs after another Byers single and a walk to Meterko, but Plummer bore down and got Isaac Stouffer looking to end the threat. Jamison Rhoades retired the side in the seventh to secure the shutout.

But until the sixth, it was a frustrating 3-0 lead for the Grays, Plummer’s brilliance aside. They stranded 11 runners overall, but nine through the first five innings as Miners starter Isaac London was able to get out of jams every inning to either limit damage or keep the Grays off the scoreboard.

“I thought Rossiter had its chance to come back and had it loaded but the didn’t get the hits,” Grays manager Bob McCullough said. “What I saw from Plummer was someone in command, I thought. He looked really good, had his curveball or a slider. I guess that’s what he calls it. He threw 86 pitches, the same as what he shot in golf today.”

“Actually, I shot an 83 in golf and threw 86 pitches,” Plummer corrected and laughed. “Not to brag. That’s a humble brag.”

Brady Caylor singled three times, walked once and scored two runs while Joey Lopez singled twice and scored twice. Those two started the two-run first with singles and after Jake Meeker walked, Rhoades singled in Caylor and Lopez for the 2-0 lead.

In the second, Bryce Rafferty walked to lead off the inning, then scored when Joey Lopez’s shallow popup fell in left field, resulting in a fielder’s choice out at third.

But the Grays stranded two runners in the third and had bases loaded in the fourth before London struck out Rhoades and got Hunter Geer to ground into an inning-ending double play. In the fifth, Chase Palmer tripled to lead off the inning but was thrown out at the plate on Geer’s grounder to shortstop.

In the sixth after Plummer got out of his jam in the top of the inning, the first six Grays reached base. Caylor’s infield single, Lopez’s single and Meeker’s hard grounder past first base pushed Caylor home to make it 4-0, chasing London from the game.

Rhoades walked, Geer’s grounder to short on a drawn-in infield was still able to score a run with the Miners getting now one and Palmer walked to force in a run to highlight the game-sealing five-run inning.