Skip to main content
You are the owner of this article.
Edit Article Add New Article
You have permission to edit this article.
Edit
Our Network
Home
News
Sports
Obits
Multimedia
Opinion
Living
Classifieds
+ More
Share This
1 of 4

DuBois’ Carter Vos, top, fights to finish off a second period pin of Johnsonburg’s Ty Lewis during their 152-pound bout Tuesday night. Vos, who trailed 7-1 after one period, got the fall in 3:15 to seal a Beavers’ victory. 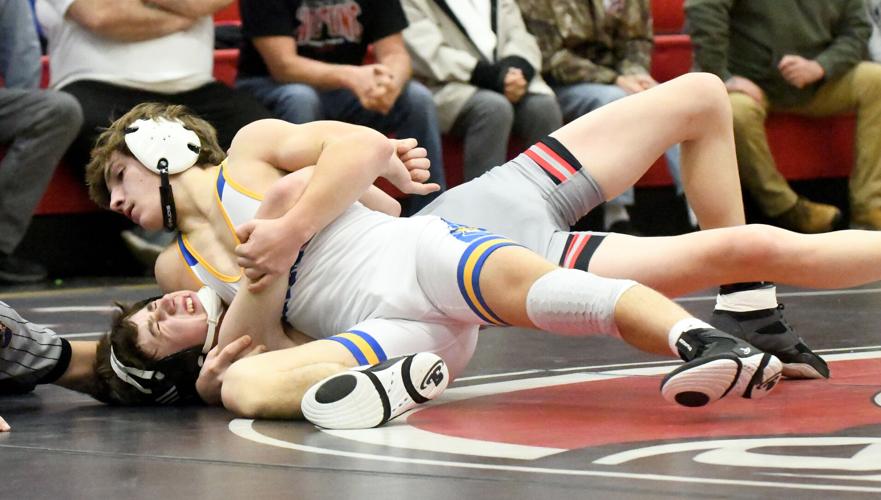 Johnsonburg’s Gino Casilio, top, tries to pin DuBois’ Jeff Morris on the edge of the mat during their 121-pound bout Tuesday. Casilio got the fall in 2:33. 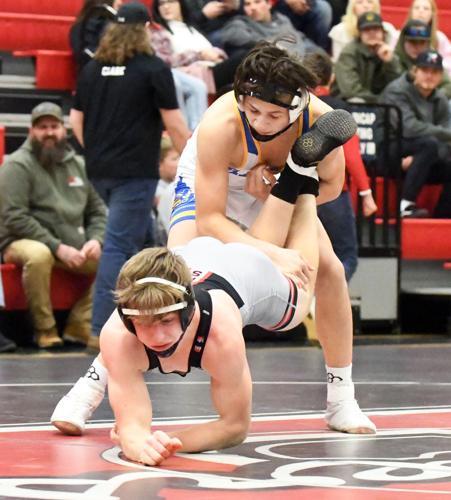 Johnsonburg's Avery Bittler, back, takes down DuBois' Alex George in the first period of their 145-pound bout Tuesday night. Bittler pinned the Beaver in 2:33.

DuBois’ Carter Vos, top, fights to finish off a second period pin of Johnsonburg’s Ty Lewis during their 152-pound bout Tuesday night. Vos, who trailed 7-1 after one period, got the fall in 3:15 to seal a Beavers’ victory.

Johnsonburg’s Gino Casilio, top, tries to pin DuBois’ Jeff Morris on the edge of the mat during their 121-pound bout Tuesday. Casilio got the fall in 2:33.

Johnsonburg's Avery Bittler, back, takes down DuBois' Alex George in the first period of their 145-pound bout Tuesday night. Bittler pinned the Beaver in 2:33.

DUBOIS — Johnsonburg won four of the six bouts contested on the mat Tuesday night against DuBois, but the host Beavers proved to be just a little deeper numbers-wise in a matchup of two teams missing key wrestlers for various reasons.

Three of the Rams’ four wins on the mat came by way of fall, but it was a huge pin by DuBois sophomore Carter Vos against Ty Lewis at 152 that sealed the team win for the Beavers.

DuBois entered that matchup at 152 with a six-point lead (24-18) after Johnsonburg’s Avery Bittler decked Alex George in 2:57 at 145. And, it looked like the Rams might continue to build some momentum at 152 as Lewis jumped out to a big 7-1 lead after one period against Vos.

The Ram opened the scoring with a takedown only to see Vos escape. Lewis then took Vos down to his back late in the period for a five-point move but couldn’t finish off a pin as Vos fought off his back. That sequence proved vital in the bout and the overall match.

Vos chose bottom in the second and reversed the Ram to make it 7-3. It then appeared Lewis was going to return the favor. However, Vos fought off that move in a wild flurry that saw the Beaver put Lewis on his back en route to getting a fall in 3:15.

Vos’ pin put DuBois up 30-18 and assured DuBois of the team victory with wrestlers left at just three of the final five weight classes — including a forfeit win for Beaver heavyweight Zack Gallagher in the last bout that set the final score.

The win was DuBois’ fourth in its last seven matches, a stretch that includes a 2-3 stint at the Bison Duals on Saturday, after an 0-5 start to the season.

“We know we’re having a hard time competing as a team right now, so I’m more focused on getting my guys ready individually for the postseason right now. Obviously, we want to win matches as a team, but at the end of the day it’s an individual sport, and I have to get these guys ready for February and March.”

Freshman Antonio Giambanco got the Beavers off to a strong start as he pinned Gage Singer in 3:29 in the opening bout at 107. Giambanco dominated the match, building an 11-0 lead before securing the fall.

The Beaver notched a takedown in the first period before turning Singer twice for three nearfall points each time. Giambanco then tacked on a penalty point in the second before eventually reversing Singer to his back to get the pin.

Johnsonburg answered right back at 114, where Brady Porter pinned Aubree Donahue with .3 seconds left in the first period after scoring two takedowns in he periods.

Teammate Gino Casilio then gave the Rams a 6-point lead (12-6) by decking Jeff Morris in 2:33 at 121. Casilio held a slim 3-2 lead after one period but quickly reversed Morris to his back in the second period before securing the fall.

Johnsonburg cut that deficit in half at 145 as Avery Bittler pinned Alex George in 2:57 while leading 3-0. Vos and Lewis then hit the mat at 152, with Vos picking up the match-sealing pin for the Beavers.

The final bout of the night on the mat followed at 160, where Johnsonburg returning Class AA state medalist Aiden Zimmerman bested Carter Wilson, 3-1. Zimmerman scored all the points he needed with a first-period takedown. Each wrestlers notched an escape from there before Zimmerman rode out Wilson in the third period.

Ram Rayce Milliard followed with a forfeit win at 172 to pull the Rams within three at 30-27. That’s as close Johnsonburg got though. After there were no matches at 189 and 215, Gallagher closed out the DuBois victory with his forfeit win at 285.

DuBois wrestled without the services of Davey Aughenbaugh, Tycen Roy and Jason Gardner, while the Rams were without returning state qualifier Kaden Dennis, Cameron Larkin and Eli Perez.

DuBois (4-8) wrestles at the Fred Bell Memorial Tournament this weekend, while the Rams (4-2) host Punxsutawney Thursday before competing at West Branch’s Ultimate Warrior Tournament over the weekend.