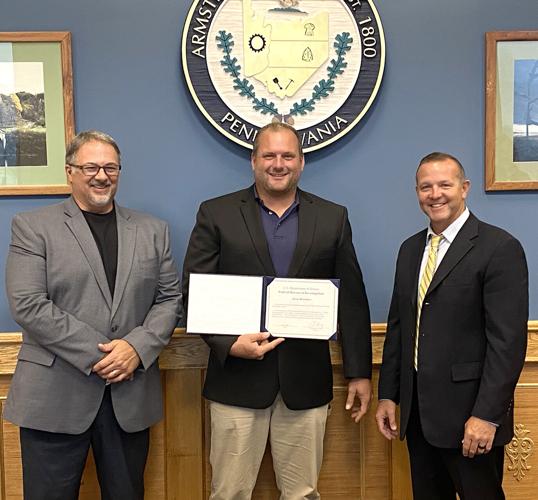 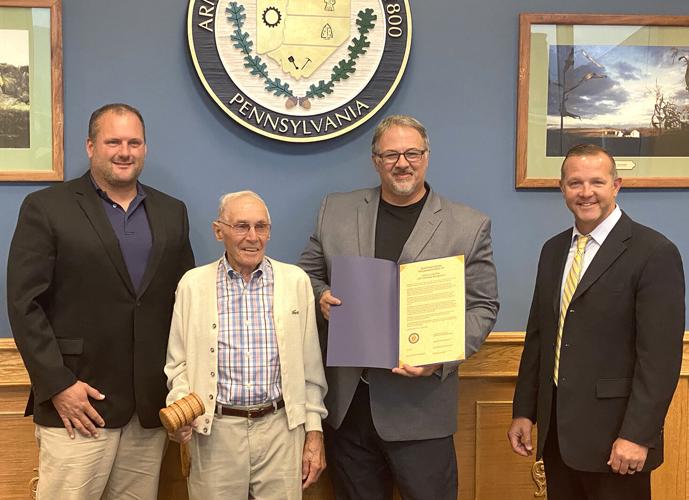 IN CELEBRATION OF HIS 100th birthday on Aug. 12, Carl L. Culp (second from left) was recognized by Armstrong County Commissioners (from left) Jason Renshaw, Don Myers and Pat Fabian at their meeting last week. Culp served two terms as county commissioner after being elected in 1983.

IN CELEBRATION OF HIS 100th birthday on Aug. 12, Carl L. Culp (second from left) was recognized by Armstrong County Commissioners (from left) Jason Renshaw, Don Myers and Pat Fabian at their meeting last week. Culp served two terms as county commissioner after being elected in 1983.

KITTANNING – A pair of Armstrong County commissioners — one past, one present — were recognized last week. And for two completely different reasons.

Current county commissioner Jason Renshaw was honored for his involvement in an out-of-state FBI government corruption investigation, while Carl Culp, a two-term commissioner in the 1980s, was celebrated for his 100th birthday.

“As county commissioners, we take an oath of office and we adhere to county code. We do it with integrity, trustworthiness and fairness,” he continued. “It is rare that we recognize this office, especially one of our own for going above and beyond.”

Fabian said that when the commissioners’ office was called upon to assist in a public corruption investigation by the Federal Bureau of Investigation (FBI), “Commissioner Renshaw was more than willing to step up to assist.”

“We can’t go into details with what happened, but Commissioner Renshaw definitely went above and beyond,” Fabian said.

“It takes a while to go through the process,” he said after the meeting, noting that everything with the case has been concluded.

But due to the pandemic, he said the FBI apparently got behind in recognition, and just recently sent him a certificate of appreciation that was signed by FBI Director Christopher Wray and dated April 2020.

The certificate was awarded by the FBI “In recognition of your outstanding assistance to the FBI in connection with its investigative affairs.”

“Your cooperation was of immeasurable help to our representatives,” Wray wrote. “I share their gratitude for your support, which assisted them in carrying out their responsibilities. You can take pride in the role you played in the success achieved, and my associates and I congratulate you on a job well done.”

“It was interesting,” Renshaw said of his role in the investigation. “Something different.”

Commissioner Don Myers called Renshaw “Super Commissioner,” and said it was an honor to work alongside him. He described his fellow commissioner as someone who is committed to the taxpayers of Armstrong County.

Earlier in the Aug. 4 meeting, the commissioners also had the chance to welcome former county commissioner Carl L. Culp, who will celebrate his 100th birthday on Aug. 12.

The commissioners proclaimed the day as Carl L. Culp Day in Armstrong County, noting that Culp was born in 1922 and graduated from Ford City High School in 1940.

Before being elected to office in 1983, Culp was a dairy farmer, and opened Culp’s Farm Dairy Store in 1963.

Over the years, he served as president of the Pennsylvania Farmer’s Association, chairman of the Democratic Party and was a supervisor in Manor Township. He also held the position of superintendent of highways for PennDOT in Armstrong County, during which time the Route 28 North Expressway was completed.

Culp was married for just shy of 70 years to hit late wife, Marie, and is surrounded by his family of three children, Robert, Christopher and Bonnie, along with five grandchildren and three great-grandchildren.

The commissioners thanked Culp for his lifetime of work.

“It is an honor, thank you,” Culp said. “The challenges have been many, but the blessings [have been great].”

The commissioners called on Culp to help them close the meeting by striking the gavel.

“I don’t know what to expect out of the next hundred [years],” he said.

• Upon a request from Bradys Bend Township officials, the commissioners approved a $9,940 allocation of county liquid fuels funds to help pay for repairs to Cemetery Road following a landslide in the area. Officials said the total project cost $19,880.

• The commissioners approved a $5,000 Marcellus Legacy allocation for the Outdoor Discovery Center at Crooked Creek.

North Clarion County School District has an anticipated opening for