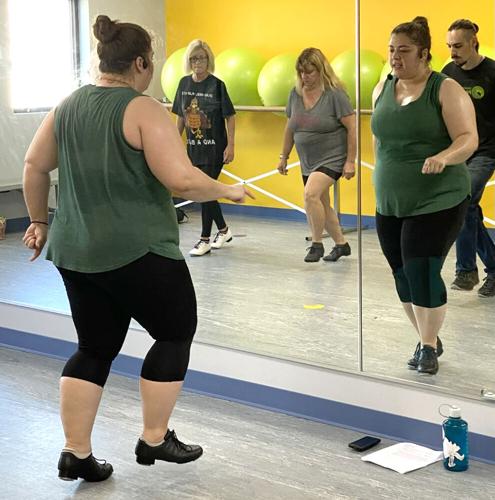 DANIELLE TAYLOR leads her clogging class at the Clarion Center for the Arts. The next session of classes will begin on July 11. 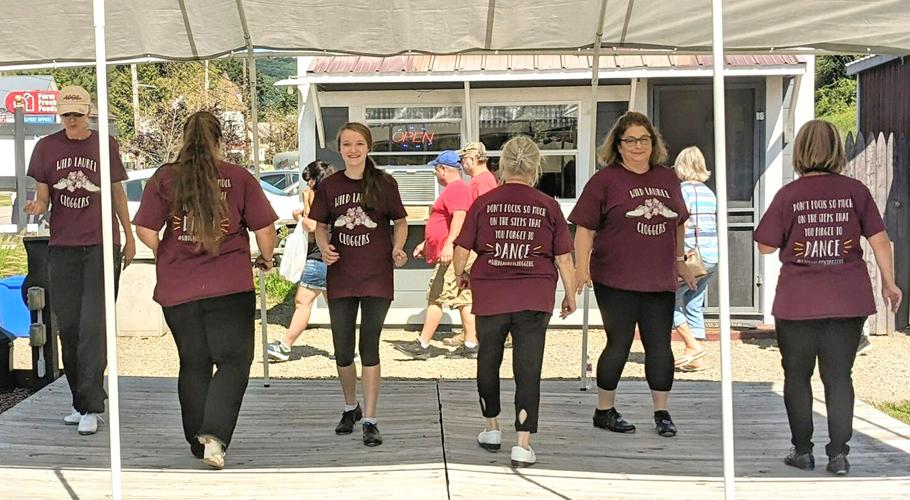 THE WILD LAUREL CLOGGERS perform at local events, including the recent Art in the Park in Brookville and the Forest County Bigfoot Festival in Marienville.

DANIELLE TAYLOR leads her clogging class at the Clarion Center for the Arts. The next session of classes will begin on July 11.

THE WILD LAUREL CLOGGERS perform at local events, including the recent Art in the Park in Brookville and the Forest County Bigfoot Festival in Marienville.

CLARION – Danielle Taylor, a resident of Brookville since 2015, began clogging, an Appalachian-style of dance, while growing up in North Carolina; continuing to do so through college and afterward in Virginia, where she was a member of the Blue Ridge Thunder Cloggers.

“Clogging is more of a thing [in North Carolina]. There’s a lot of competitive teams, especially out in the mountains,” noted Taylor. “I learned it as an elective at my elementary school [in the Raleigh-area]. The group I was with from elementary school through ninth grade performed at the state fair each year; there were cloggers from all over the state.”

Arising from the hills and hollows of Appalachia, clogging melds elements from traditional dances performed by the diverse mountain population; including English and Scotch-Irish settlers, as well as the descendants of enslaved people. Traditionally done to the accompaniment of bluegrass, clogging, at its most basic, involves keeping time with a heel strike on the music’s downbeat.

Describing the dance, Taylor said, “It’s very focused on the sound of what your feet are doing. The basic step is called a double step, that’s how you essentially keep time with the music. Most clogging is built off that. The steps get more complicated, but that’s sort of your baseline.

“A lot of the time you’re standing on one foot and striking the floor with your toe or heel of the other foot. With tap [dancing], a lot of times you’re up on your toes. With Irish step [dancing], the legs are more in front and behind each other. With clogging, it’s kind of looser and not as rigid as either of those dance styles.”

Founder of the Wild Laurel Cloggers, a dance troupe that performs at area events, Taylor began teaching others to clog in 2018. She now conducts beginning through advanced classes at the Clarion Center for the Arts; with classes typically offered four times throughout the year and running for 10 to 12 weeks.

“I try to make it friendly to everybody of all skill levels, of all ages, of any level of dance experience. I try to make the beginner classes totally beginner friendly,” Taylor explained. “I walk [beginners] through the first couple of steps. The first is literally just stepping in place in time with the music. And then we build up from that, doing heel steps and toe steps in time to the music. Then you move to double steps, where you start brushing your foot forward and back, start having the motions people associate with clogging.”

Some pick up clogging quicker than others.

“Beginners are welcome to advance at their own pace,” Taylor said. “I have some people in my beginner’s class that are antsy to move to the advanced class a couple of weeks in. I’ve got some people who take the beginners class multiple times until they become more comfortable with the basic moves.

Recognizing this, Taylor offers the first class session for free; a “try before you buy” option.

“I invite everybody who comes out to try it for an hour free,” she said. “I’ll walk them through the first handful of steps and we’ll dance to different songs. If they’re like, ‘This isn’t what I thought it would be,’ there is no obligation to come back. If people are interested in continuing they can come back the following week.”

Those who complete the beginner class and feel comfortable dancing in front of people are eligible to begin performing with the Wild Laurel Cloggers.

Discussing her troupe’s performances, Taylor said, “We have multiple different routines. Depending on how long you’ve been with the group, you might be in all of them or only a few. I let people decide whether they know a routine well enough to perform it.

“I usually end the performance with a freestyle number called ‘Rise and Shine.’ Up until then everybody has been dancing together, but then each dancer has the opportunity to get up one at a time and do whatever steps they want; their favorite steps, whatever their feet feel like doing at the moment. It’s just completely freestyling, not coordinated with each other.”

Taylor summarized clogging and her passion for it, saying, “It’s still a very niche dance. It’s something I’m always glad to talk with people about, get the word out. It’s something I’ve been doing since I was five years old growing up in North Carolina.

“It’s always been a big part of my life. It’s a whole lot of fun. [Teaching clogging] is the highlight of my week, just going and dancing.”

The Wild Laurel Cloggers recently permed at Brookville’s Art in the Park, and at the Forest County Bigfoot Festival in Marienville.

Taylor’s next clogging class is scheduled to begin Monday, July 11 at the Clarion Center for the Arts. For more information or to register for classes, contact Taylor at wildlaurelcloggers@gmail.com or through the group’s Facebook page at www.facebook.com/WildLaurelCloggers.

[EDITOR'S NOTE: After the story was published, the following change became known:  Due to reduced summer hours at the ClarioN Center for the Arts, the clogging group will move back to the Clarion Farms Event Barn for the rest of the summer starting June 27 and will be starting its next class session there on July 11 instead of at CCA. For more about the next 12-week session, visit https://fb.me/e/1vNbMR0o]