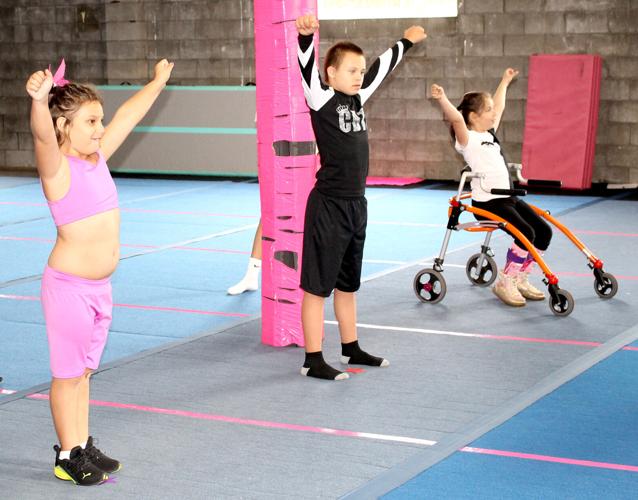 PRACTICING THEIR NEW routine at a recent CheerAbilities class at Coach Blondie Tumble and Cheer gym in Hawthorn are (from left to right): Rylee Cameron, Aaden Cochran and Rowan Pinson. 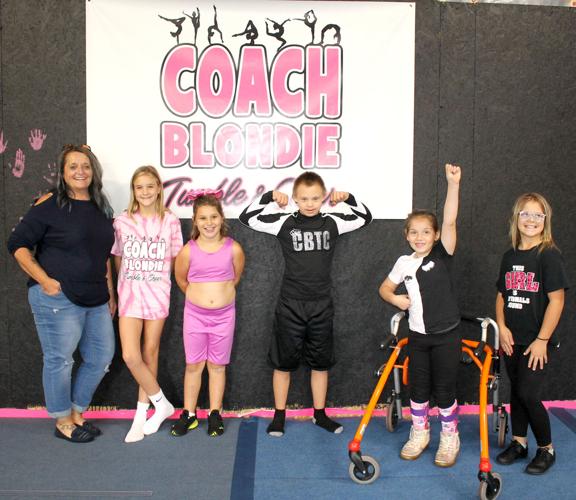 PRACTICING THEIR NEW routine at a recent CheerAbilities class at Coach Blondie Tumble and Cheer gym in Hawthorn are (from left to right): Rylee Cameron, Aaden Cochran and Rowan Pinson.

HAWTHORN – Everybody deserves a chance to cheer, and one new group in the Redbank Valley is giving children with special needs a chance to do just that.

Sponsored by Valley Advantages of New Bethlehem, a new CheerAbilities class has formed at Coach Blondie Tumble and Cheer in Hawthorn.

“You learn how to win, learn how to lose,” Kathy Carlson of Valley Advantages said of competitive cheer, something she knows personally from when her daughters were involved. She said cheer programs also help kids learn how to bond with a team, and to bolster their confidence and self esteem.

“Just because you have some challenges, doesn’t mean you don’t need to learn those [skills] too,” she said.

Amber Kimmel, who founded Coach Blondie just three short years ago, said the program continues to grow each year, going from 45 students last year at the gym in Hawthorn to around 100 today.

She said she’s thrilled to be able to offer the new CheerAbilities class, which has three students right now — Rylee Cameron, Aaden Cochran and Rowan Pinson.

Dubbed the Gold Team, Kimmel said the group has been meeting for a couple of weeks now, and is learning choreography for upcoming events, including a big send off night at Redbank Valley High School in which all teams will perform for the community. That event will be held at 6 p.m. on Nov. 15.

“It’s going to be a big night,” Kimmel said, noting that in addition to Coach Blondie teams, the night will also feature the RVHS varsity cheerleaders.

Kimmel said the new CheerAbilities class is the only one of its kind in the area, with the next closest in Pittsburgh.

“We don’t have any other CheerAbilities teams near us,” coach Chelsey Davenport said.

The team is open to anyone age 5 and older who has challenges.

The Gold Team is developing a 90-second routine that it will perform at the RVHS event in preparation for its first competitive event Nov. 19 at the Kovalchick Center at Indiana University of Pennsylvania.

“We’re really excited about that,” Kimmel said of the first competition. “It will be judged like any other cheer division.”

The three participants on the new team can’t wait either.

Eight-year-old Rylee Cameron said she loves to dance, and she really likes the songs that the team performs to. She has taken part in hip hop dance classes.

“My favorite is gymnastics,” said Aaden Cochran, age 11, who is already proficient at roundoffs and other “ninja” moves.

In addition to Kimmel and Cochran, the Gold Team is helped out by youth volunteers Eviana Reed and Gannon Clinger.

Carlson said it’s great to see the CheerAbilities team working with other kids, something that is mutually beneficial to those with and without disabilities.

“Every child deserves to have this opportunity,” she said.

Kimmel agrees, saying that the class is open for others who wish to take part.