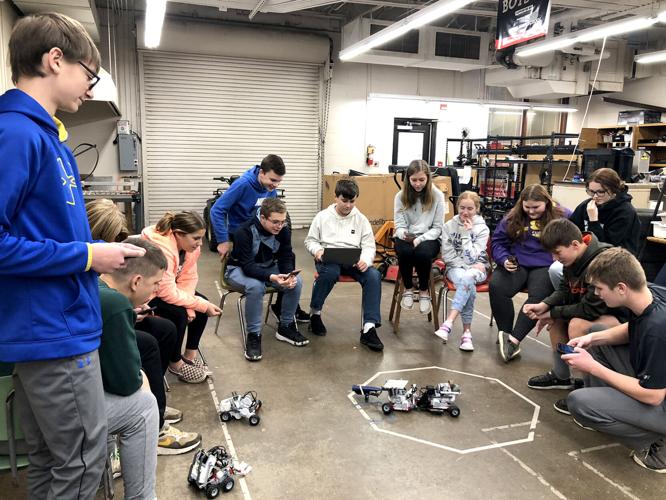 AS PART OF A unit on mechanical and robotics engineering, eighth-graders in Brad Kirkwood’s STEAM class at Union High School recently designed and constructed Lego robots that went head-to-head in a three-day “Combat Robotics” competition, which culminated Monday morning with the championship battle (pictured). 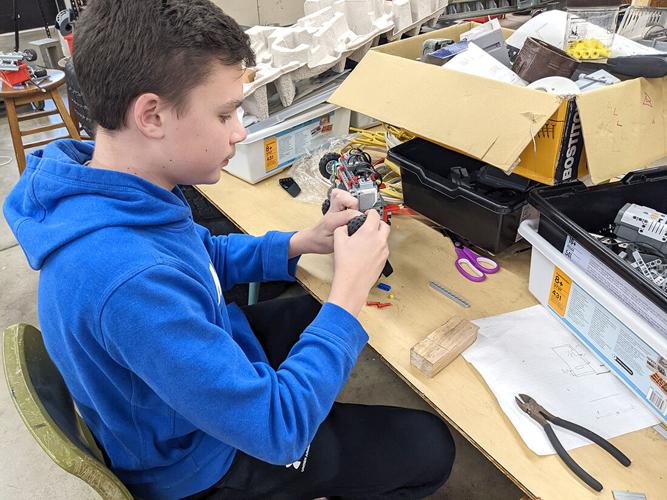 AS PART OF A unit on mechanical and robotics engineering, eighth-graders in Brad Kirkwood’s STEAM class at Union High School recently designed and constructed Lego robots that went head-to-head in a three-day “Combat Robotics” competition, which culminated Monday morning with the championship battle (pictured).

RIMERSBURG – Eighth-graders at Union High School put their engineering skills to the test as they recently designed and constructed robots that went head-to-head in a double-elimination competition to be crowned the Lego “Combat Robotics” champion.

“I wanted them to be creative and see what they could make work,” Union science teacher Brad Kirkwood said of challenging his eighth grade STEAM (Science, Technology, Engineering and Mathematics) class to build their own robots as part of a unit on mechanical and robotics engineering.

According to Kirkwood, the students have spent the last four or so weeks exploring different engineering ideas associated with gear ratios, or the connection between gear size and power.

“I wanted them to build on everything that they had learned,” he said, noting that he thought a “Combat Robotics” competition would be a fun way for the students to put their knowledge to the test.

Divided into eight teams over the past two weeks during class time, the students used past assignments and other resources to construct their own unique robots out of Legos to compete against their classmates, with one ultimately being crowned the champion.

“This was the first time I’ve done this with Legos, so I wasn’t sure what to expect,” Kirkwood said, noting that some of the robots featured four-wheel drive with four motors, others four-wheel drive with two motors and a gear train. One robot featured a weapon on the front to scoop under opponents in attempt to flip them, while others carried extra weight to outmatch opponents. “It was pretty cool. The kids really got into it.”

Once the robots were constructed, Kirkwood explained, the eight teams were randomly selected to compete in the initial “Combat Robotics” battles.

As part of the competition, the robots — which were controlled by an app on the students’ cell phones or by computer — were placed two at a time in an octagon arena. During the timed match, one point was lost when one of a robot’s wheels was forced out of the space. The match was lost when a robot had three points against it, or if it became incapacitated inside the ring.

“It was a double elimination contest where a losers bracket was created,” Kirkwood said, noting that in order to stay in the competition with one loss, a team had to battle their way to the top of the losers bracket to face the winner.

In between the battles, Kirkwood said, the students were encouraged to make updates and adjustments to their robots to better prepare them for their next fight.

“Students would come down during their study halls to make adjustments to their robots leading up to and during the contest days,” he explained, adding that over the course of the three-day contest, a team comprised of Stephen Hepler and Layne Curran was able to bounce back from a second round loss to win the losers bracket and take on the winning bracket team comprised of Alex Walzak and Easton Reinsel in the championship match on Monday morning.

In the end, Hepler and Curran’s robot came out on top during the championship battle Monday morning in class.

“When we started off, we had longer wheels and smaller, skinnier gears, and they were torn off,” Hepler explained of the initial struggles of their robot. He said that once guards and a wedge were added to the front of the robot, as well as some additional weight, “we started doing a lot better.”

Reflecting on the project, Kirkwood said he hopes the “Combat Robotics” competition will help his students become more mechanical minded and look at problems in different ways.

“I want them to have a greater appreciation for how the world works around them,” he said, noting that robotics is a great way to expose students to trade jobs such as welding, machining, fabrication and more.

He said he believes it’s important to begin honing such skills prior to high school.

“As teachers, we tend to ignore career skills until they get to high school,” he continued, adding that he understands that children begin formulating ideas about what they do and don’t want to do as adults in middle school. “If we don’t give them opportunities to find out what they are capable of doing when they are young, it can become an uphill battle when they get to high school.”