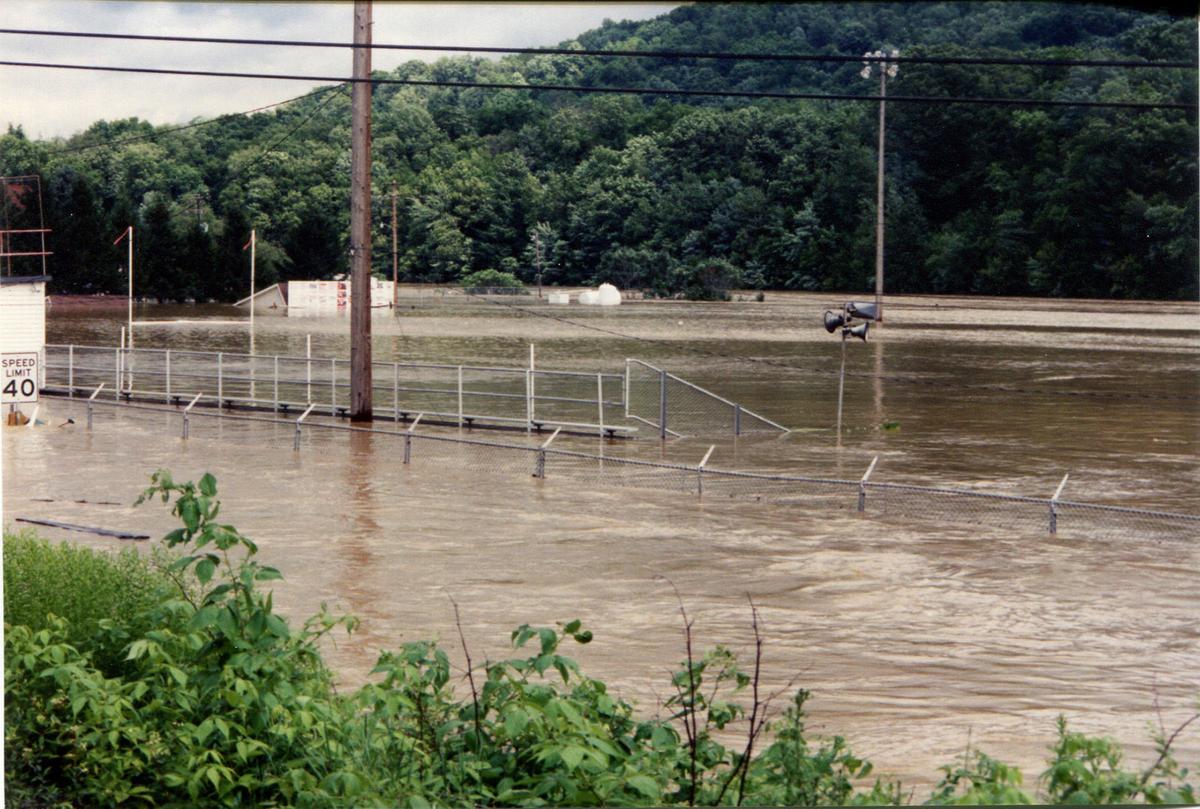 JULY 19, 1996 — This was the scene some time during the morning of that date 25 years ago, the view from above Route 28 and looking into the Redbank Valley High School football stadium where water from the Redbank Valley Creek had gone far over its banks after torrential rain in the morning hours above New Bethlehem. Note that the level of water iis even with the cross bar of the goal posts in the northern end of the field near the school. That’s 10 feet. 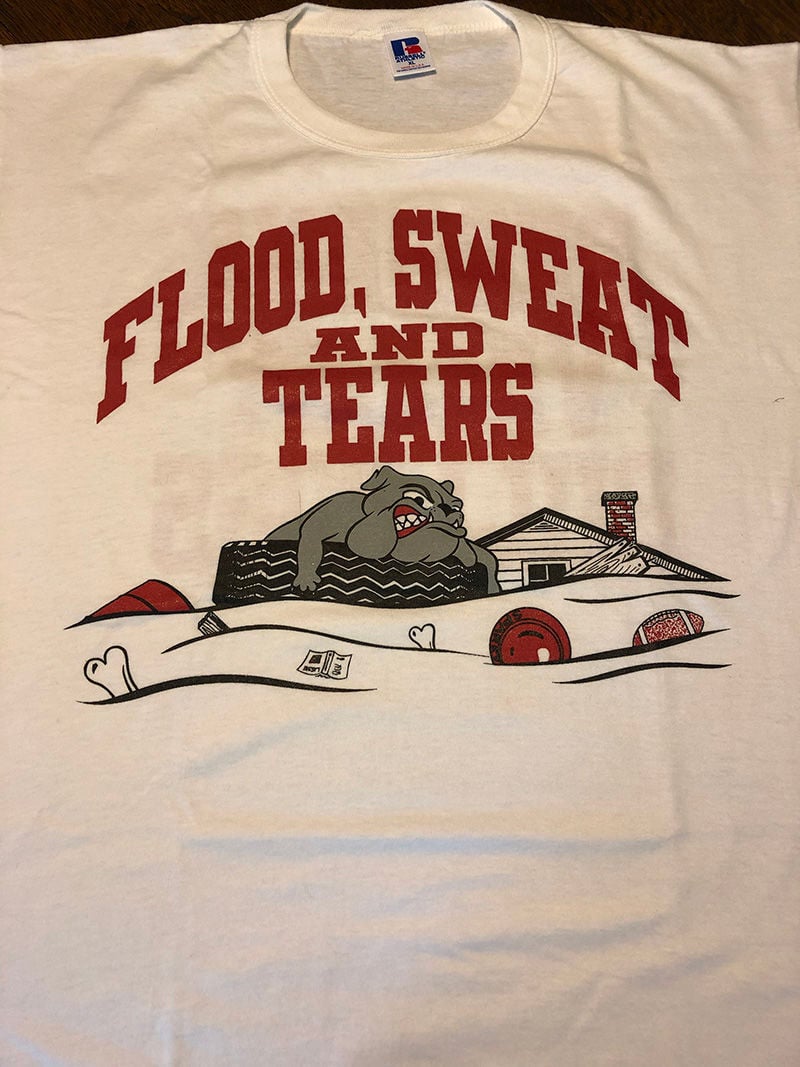 Here’s the T-shirt worn by Redbank Valley football fans in the fall of 1996 after the July flood that ravaged New Bethlehem and surrounding areas.

JULY 19, 1996 — This was the scene some time during the morning of that date 25 years ago, the view from above Route 28 and looking into the Redbank Valley High School football stadium where water from the Redbank Valley Creek had gone far over its banks after torrential rain in the morning hours above New Bethlehem. Note that the level of water iis even with the cross bar of the goal posts in the northern end of the field near the school. That’s 10 feet.

Here’s the T-shirt worn by Redbank Valley football fans in the fall of 1996 after the July flood that ravaged New Bethlehem and surrounding areas.

Sitting in the Courier-Express newsroom on the morning of July 19, 1996 finishing up the sports pages for that day’s edition, I heard the scanner blaring something that suddenly caught my attention.

“The dam has broken in Brookville.”

Familiar with what that could mean after working a few summers at the Water Plant, I was certain that it didn’t mean that some 25-foot wall of water would be barreling down North Fork Creek into downtown Brookville.

But, it wasn’t at all good news.

Earlier in the morning, before dawn, a heavy rainstorm in the area brought, what one NOAA report says just over nine inches of rain over 12 hours in the Brookville Area.

So I jumped into the car with Paul Wilson, one of the Courier’s photographers, and we went looking for stories and pictures.

My step-father Bob Fitzgerald, a longtime volunteer fireman, was on the front line in Brookville.

“(Then Fire Chief) Rob Northey and I were on the bridge at Blake’s (now Ace Hardware) and we got called around 4:30 in the morning or something and we could actually watch the water rise on the cement blocks and I told Rob, we better get to Belgiumtown. There are going to be people in trouble,” Fitzgerald recalled.

Belgiumtown is the southern part of Brookville where Sandy Lick Creek enters the borough. The lower part of the area was certainly in jeopardy.

“The last one I got to with my backhoe was a shallow approach to a man’s house trailer,” Fitzgerald said.

It wasn’t shallow, about a nine-foot dropoff and he and his backhoe went completely underwater in the flooding water. He got out of that OK, and he still has his tractor today, with a few hours of repair work, including a rebuilt motor.

Later, Fitzgerald was able to rescue a few dogs and relocate them by tying up safely near the Catholic Church on higher ground with the borough police phoning owners.

Downstream in Summerville, the flooding damage was worse. Along Water Street next to the Redbank Creek, Ron Dolby was wading through waist-high water into his trailer, looking to put belongings higher and out of the water.

“Flooding, if you remember, happened similar in January so I figured it’d do the same thing,” Dolby remembered. “So I’m inside putting stuff up and it’s up to my waist inside and I checked the phone on the counter and it was still working, so I called my daughter and told her where I was.

“I hung up and it kept getting higher and I looked out the window and Norm Ishman and Dave Brocious were in a boat attached to a fire truck up at the Church of Christ parking lot (along Route 28 across from Glen-Gery). They were coming down because they knew I was there and my mother was up at the church.”

Again, Dolby didn’t realize that this wasn’t going to be like January, although that flooding was significant as well. But he knew he was stuck where he was, figuring he’d ride it out.

Eventually after more boat maneuvering Dolby got on the boat. Swimming in the now raging floodwater was far from an option.

“We got to the parking lot and three of us decided to walk down stream and see if there’s anybody we could help and helped a couple of people in houses,” Dolby said. “I came back about 30 minutes later and the trailing was about 30 feet up in the trees and then it just broke loose (and went downstream).”

A few days later he and his friend Tom Keth walked downstream to where there was a big bend in the now much quieter creek and saw where everything hit the bank, or wall, and exploded. They, like other homeowners, climbed through the rubble looking for belongings.

“I found some things, but nothing I really wanted to find,” Dolby said.

It was awful as well in New Bethlehem further downstream as the low-lying town along the Redbank was getting what started further north. Flood water naturally got all of the low-lying properties, including the high school. Water at least got four feet in the building and up to 10 field over the football field, reaching the cross bar of the goal posts.

Redbank Valley senior-to-be Alan Clouse was getting ready to gear up for a very promising football season under head coach Dave Moore. He wasn’t directly affected by the flooding, his home being in the Widnoon area.

He and the rest of the team helped with cleanup efforts, but school was still delayed and the football field wasn’t not deemed playable by the season started.

“It was so long ago, but I really didn’t think much of it at the time until you realize that you’re seeing a delay because you’re not able to play any home games,” Clouse said. “We were playing football and we weren’t even in school yet and we had away games and we practiced on the baseball field (at Redbank Valley Municipal Park) in Alcola.”

It was Moore’s final football season with the Bulldogs, who wound up winning the District 9 title in their “Flood, Sweat and Tears” season in a 7-0 win over Port Allegany. They finished 11-1 in a season that started with the ravaging flood.

And me? After walking around Brookville all day that Friday, I hopped on a plane to Atlanta early the next morning to cover 19-year-old Brockway JoAnn Sevin who competed in the Air Pistol at the Summer Olympics.

Looking back, the pictures of places where I’ve spent much time — the Little League complex in Brookville and football field at Redbank Valley — totally covered with water is spooky.

It was quite a whirlwind weekend for me 25 years ago, but far worse for those who lost their homes and property in the Flood of 1996.

Rich Rhoades is the sports editor of the Leader-Vindicator and Jeffersonian Democrat in Brookville. E-mail: rrhoades@thecourierexpress.com or follow on Twitter @TheSkinny1969.