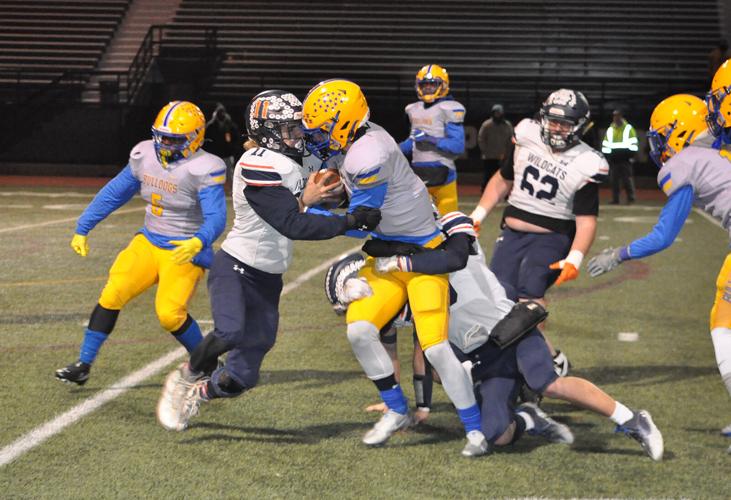 Westinghouse quarterback Keyshawn Morsillo is tackled by Central Clarion’s Ryan Hummell (11) and an unidentified teammate during last Friday’s game. Morsillo ran for a touchdown, threw for another and scored two two-point conversion runs in the Bulldogs’ 44-8 win. 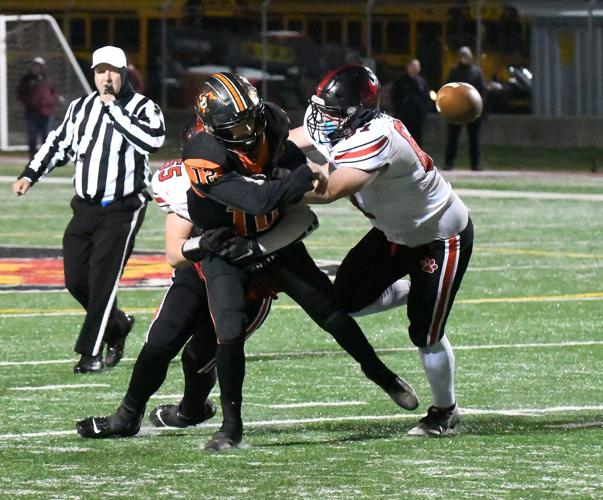 Brockway’s Aiden Grieneisen (55) and Reese Yahner (67) pressure Port Allegany quarterback Drew Evens (12) into throwing a ball away that ultimately was ruled intentional grounding on a fourth down play late in the first half last Friday night.

Westinghouse quarterback Keyshawn Morsillo is tackled by Central Clarion’s Ryan Hummell (11) and an unidentified teammate during last Friday’s game. Morsillo ran for a touchdown, threw for another and scored two two-point conversion runs in the Bulldogs’ 44-8 win.

Brockway’s Aiden Grieneisen (55) and Reese Yahner (67) pressure Port Allegany quarterback Drew Evens (12) into throwing a ball away that ultimately was ruled intentional grounding on a fourth down play late in the first half last Friday night.

PITTSBURGH — After relying on big plays throughout the season, the Central Clarion Wildcats found it hard to get those big plays against Pittsburgh City League power Westinghouse in last Friday’s 44-8 PIAA quarterfinal loss at a chilly Cupples Stadium in downtown Pittsburgh.

Central Clarion, which finished its season 10-2, managed just 106 yards of total offense including 17 yards rushing. Jase Ferguson completed 9 of 19 passes for 89 yards with one touchdown.

“That’s a really good football team over there and we knew that coming in,” said Central Clarion head coach Davey Eggleton of the Bulldogs who move on to the PIAA semifinals, also at Cupples Saturday at 1 p.m.

The Bulldogs outgained the Wildcats, 407-106, as six different players scored touchdowns. Quarterback Keyshawn Morsillo ran for 44 yards on nine carries and a touchdown while throwing for another along with scoring two two-point conversions and throwing for one.

Central Clarion struggled offensively for much of the evening as evidenced by being forced to punt on its first three offensive possessions of the opening quarter.

The Wildcats’ defense held tough on the first two Westinghouse drives before the Bulldogs broke through to get on the scoreboard on their third drive.

The Bulldogs drove 43 yards in eight plays capped off by a three-yard run by Shaun Robinson with Davon Jones catching the two-point conversion pass from Morsillo for an 8-0 lead with 2:15 to play in the first.

Following a Central Clarion punt early in the second quarter, the Bulldogs took over at their own 26. Seven plays later, Morsillo connected with Jones on a 15-yard touchdown pass. The two-point attempt failed, and Westinghouse led 14-0 with 8:12 to play in the half.

Central Clarion did get an interception at the Bulldogs’ 10 by Tommy Smith. The Wildcats were able to move the ball to their own 47 before Ferguson was stopped short on a fourth down play.

A 38-yard pass play from Morsillo to Jones put the ball at the Wildcats’ 3 before Khalil Taylor scored from three yards out. Once again, the conversion failed, leaving the score 20-0 Westinghouse at halftime.

“I felt our guys gave a great effort tonight,” said Eggleton. “They were a fast team, but I felt physically we went toe to toe with them. We missed some tackles as they had some shifty guys.”

On the opening drive of the second half, Morsillo plunged in from two yards out to cap of a 12-play, 81-yard drive. Morsillo also added the two-point run for a 28-0 lead with 8:11 to play in the third.

The Bulldogs would tack on another score in the quarter as Roderick Jeter would run for a 21-yard score with Morsillo adding another two-point run to push the score to 36-0 putting the mercy rule into effect at the 3:12 mark of the third.

Westinghouse added a 1-yard run by Khalil Green with the two-point conversion, setting the final score of 44-8.

“I felt our defense played pretty well overall despite the score,” said Eggleton. “I’m proud of our seniors for getting here after what happened at the end of last year. They worked so hard, and these younger guys know what it takes. It all depends on what they do from here on out to try and get back here and go further. We have a great core group of guys coming back so I’m excited for next season.”

In other playoff games from last Friday:

At Bradford’s Parkway Field, the Gators won their first District 9 Class 1A title since 2012, scoring two touchdowns in the fourth quarter to rally for the win.

While the Rovers finished 8-5 after starting the season 2-3, the Gators (11-2) advance to the PIAA quarterfinals against District 10 champion Reynolds back at Bradford Friday night.

After Port blasted Brockway, 40-7, back in Week 5, the second time around was certainly much closer. The Rovers, who avenged an earlier loss to Redbank Valley by knocking the Bulldogs out in the semifinals, looked like they might be on the verge of avenging another loss when it took 14-7 third-quarter lead Friday night against Port when Jendy Cuello ripped off a 43-yard touchdown run with 3:15 left in the quarter.

Cuello enjoyed another big night as he ran for 124 yards on 22 carries. The huge run came right after a big 15-yard holding penalty put the Rovers in a big 2nd-and-25 hole. Aiden Wilcox’s second extra point of the evening put Brockway up 14-7.

Noah Archer scored both Port touchdowns in the fourth as part of a monster night for the Gators that saw him rack up 190 total yards (158 rushing, 32 receiving). Archer pulled the Gators within a point at 14-13 when he scored from six yards out with 10:30 to play.

The Gators (11-1) elected to go for two at that point, and Archer came up with another big play as he faked a run up the middle before hitting a jump pass to Peyton Stiles to put Port up 15-14.

Archer made an outstanding, leaping one-handed grab across the middle for 14 yards on 4th-and-3 at the Brockway 42 to keep the scoring drive alive.

Brockway quickly countered with a nice 23-yard kickoff return by Carter Hickman that gave the Rovers the ball at the Gators 47.

Two five-yard runs by Cuello gave Brockway a first down before Miska Young sacked Rovers QB Brayden Fox for a 6-yard loss. Cuello then ripped off a 14-yard run to set up a key 4th-and-2 play at the Port 29.

Fox appeared to draw one of Port’s interior lineman offsides, which the Brockway linemen reacted to. However, no call was initially made until a late flag came in. After a discussion by the officials, they called Brockway for a false start — having ruled the Port player hadn’t crossed into the neutral zone.

The penalty gave Brockway a longer fourth down play, on which Fox threw incomplete as the Rovers turned the ball over on downs in a one-point game.

Port Allegany was back in the end zone just three plays later in a quick turn of events as Archer took a toss left, then made a cut upfield before racing 57 yards to paydirt with 6:20 to play.

Brockway did block the Gators’ extra point, keeping it a 7-point game at 21-14.

In the PIAA Class 3A playoffs, the D9 Class 3A champion Bison came up short in a loss to the D6 champion Dragons.

Central quarterback Jeff Hoenstine threw for 231 yards and three touchdowns while rushing for another. The Dragons scored three times in less than five minutes in the second quarter and led the Bison 28-0 by halftime.