Redbank Valley and Union came together for a picture during Tuesday’s Pink Night at Redbank Valley, raising awareness and money for cancer. The Lady Bulldogs won in straight sets. 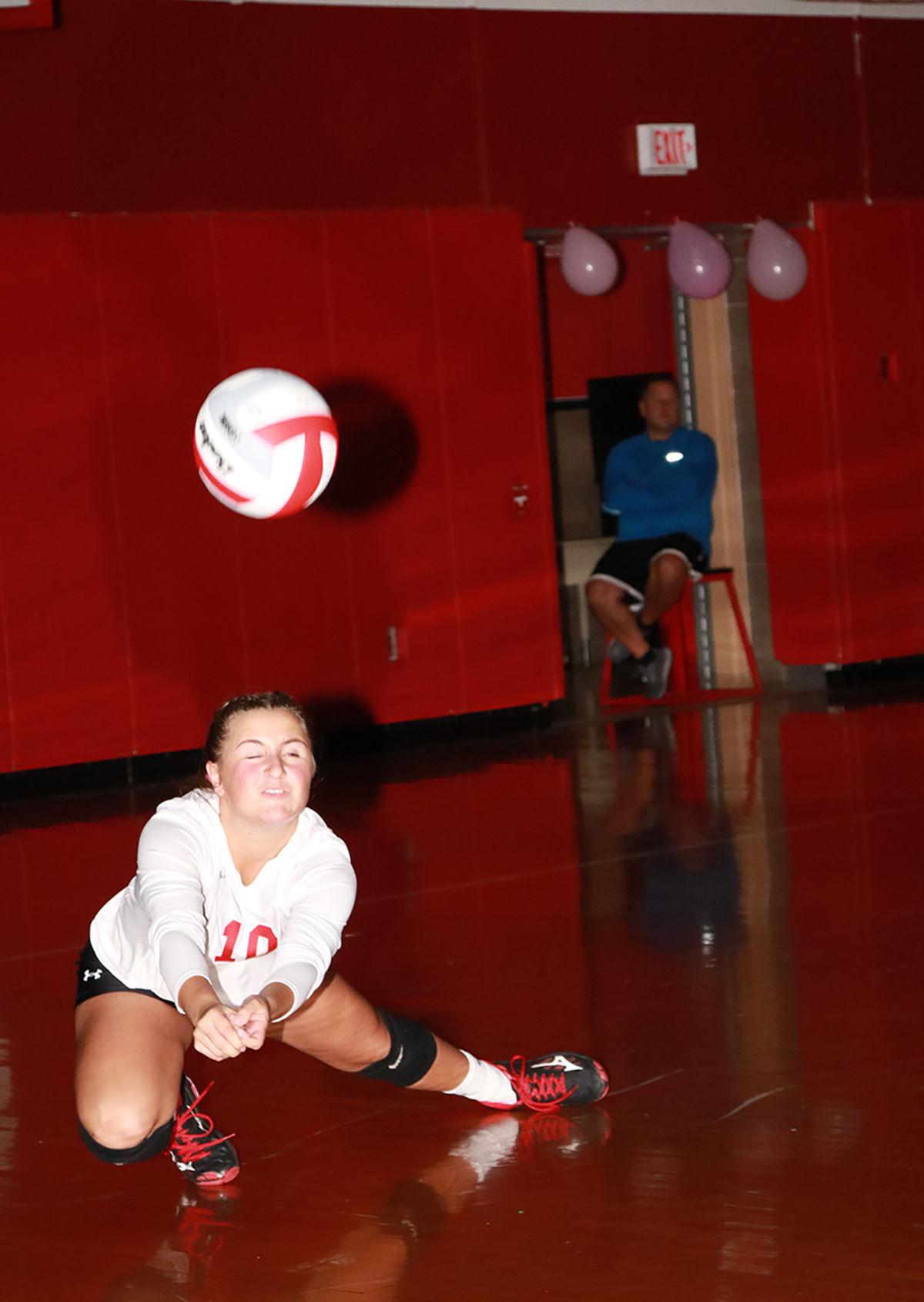 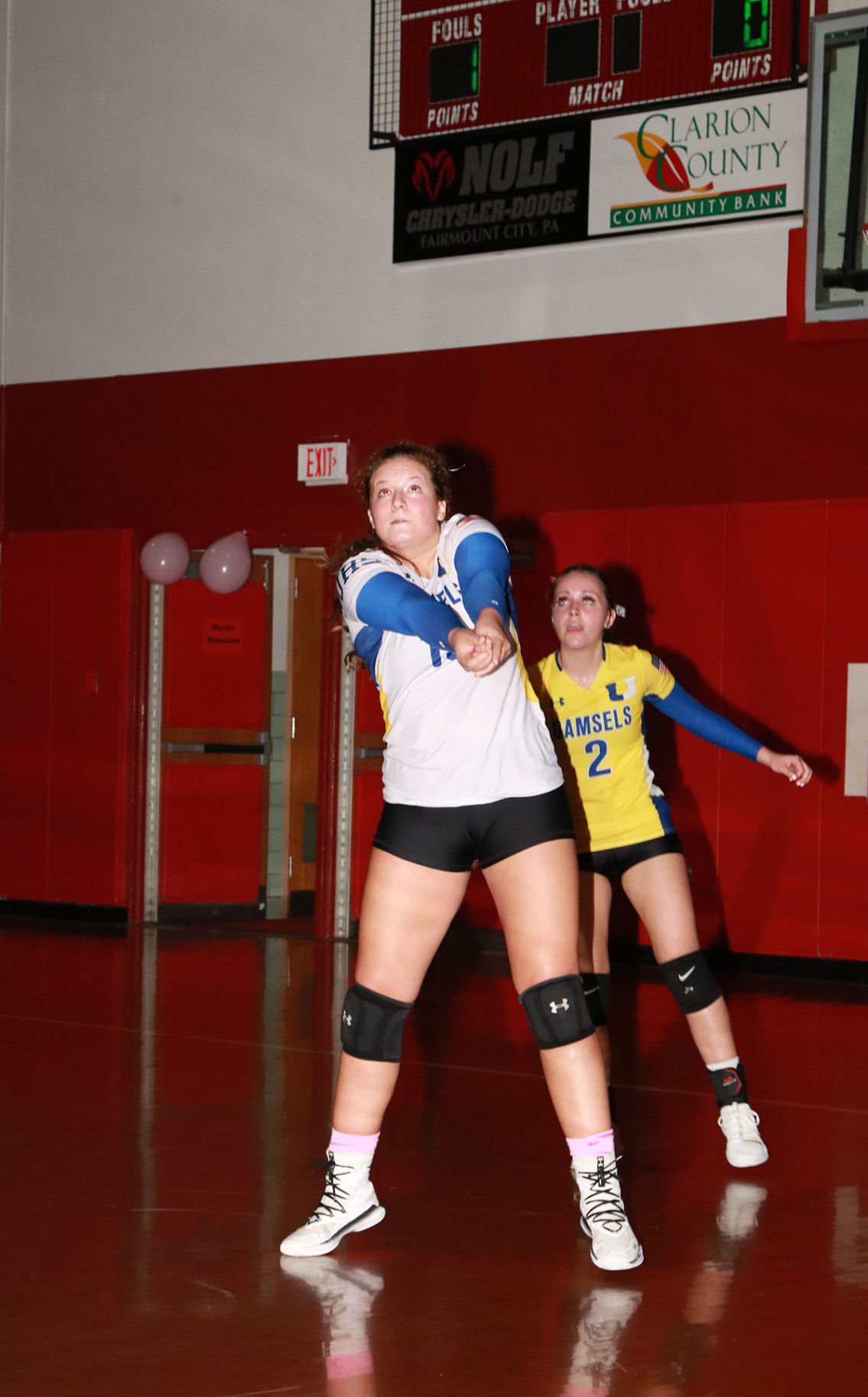 Union’s Dominika Logue digs a volley with teammate Kennedy Vogle backing her up during Tuesday’s game at Redbank Valley.

Redbank Valley and Union came together for a picture during Tuesday’s Pink Night at Redbank Valley, raising awareness and money for cancer. The Lady Bulldogs won in straight sets.

Union’s Dominika Logue digs a volley with teammate Kennedy Vogle backing her up during Tuesday’s game at Redbank Valley.

NEW BETHLEHEM — It’s not often a volleyball game changes in the first set, but that is exactly what happened in Redbank Valley’s 3-0 victory over visiting Union Tuesday night.

The Golden Damsels (9-6) had rallied from a 23-21 deficit to take a 25-24 lead following a hitting error by Redbank Valley’s Alivia Huffman.

At that point, a rally ensued that ended with the ball on the arm of Huffman, whose hit went long. Both officials singled it was Union’s point and therefore the Golden Damsels set.

Redbank Valley (8-3) players lobbied that the ball was tipped at the net by either Kya Wetzel or Hailey Kriebel or both.

At first, the chair official didn’t seem to buy the lobbying but then he called the floor official over.

After a discussion, it was decided to replay the point.

This time, Huffman’s kill was good and it was tied at 25, and Redbank Valley then took a 26-25 lead on a hitting error by Dominika Logue.

A service error by Makayla Monrean tied it back at 26, but Huffman came up big with another kill to make it 27-26, and when Logue and Allie Conner had a communication error on who was going to play the ball the Lady Bulldogs had the 28-26 set victory.

“That was a big play for us to get that replayed,” Redbank Valley head coach Ashley Anderson said. “We’ve been working on how calls go your way and how calls don’t and to use it to your advantage. I think they really stepped up and did that tonight. Even though that was called in our favor, they treated it like it wasn’t.”

Union head coach Corri Shumaker thought that was the turning point in the match.

“I think it’s rough,” Shumaker said. “We talked about it in the locker room. If we had won that first set … it just totally changed from the excitement. It just went downhill after that. I feel like if we could have pulled that first set out, we could have come a lot closer, anyway.”

Despite the downer from the first-set loss, Union played well in the second set and led 19-16 before allowing Redbank Valley to rally to win, 25-22.

Union was in the set because of strong serving that saw the Golden Damsels record nine aces in the set, including three each from Kriebel and Kennedy Vogle.

“They have some good drop serves,” Anderson said. “Our girls just weren’t getting under the ball. A drop serve is hard to show in practice. It is not a game-like situation. It’s definitely something we haven’t seen a lot of.”

For the match, Union had 16 aces including four each from Kriebel and Logue and three from Vogel.

The third set was tight with the score tied at 14 before Redbank Valley finished off the set and the match on an 11-1 run.

“I thought from the very beginning the girls played really well,” Anderson said. “Those close games are fun. I think when they’re that close it keeps them upbeat, too.”

The Damsels host Karns City Thursday, and North Clarion and Clarion next Monday and Tuesday.

Alivia Huffman turned in 13 kills and three aces while Lilly Shaffer ran the offense with 22 assists along with five aces. Caylen Rearick had 16 digs and three aces.

Also at the net, Carlie Rupp and Taylor Ripple each had five kills.

Alivia Huffman had a big night at the net with 21 kills while Makayla Monrean and Taylor Ripple contributed to the attack with 12 and nine kills respectively.