Skip to main content
You are the owner of this article.
Edit Article Add New Article
You have permission to edit this article.
Edit
Home
News
Sports
Obits
Opinion
Socials
Living
Classifieds
+ More
Share This
1 of 3 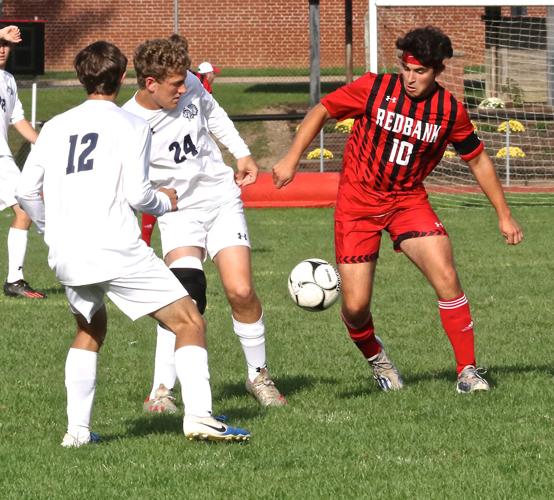 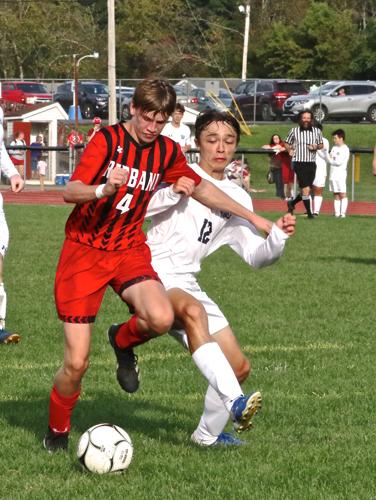 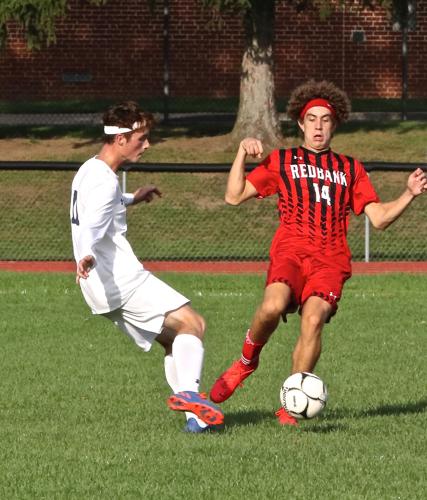 NEW BETHLEHEM — Both Redbank Valley soccer teams tangled with two stubborn Brookville squads and came away with a split decision Tuesday night under the lights at the football field.

In the first game, the Bulldogs stayed unbeaten with a 2-1 win over the Raiders while the Lady Bulldogs gave up two first-half goals and were stymied the rest of the way in a 2-0 loss to Brookville.

Both Brookville teams were coming off a home sweep of Brockway on Monday. In the boys’ game, the Bulldogs (6-0) scored twice in the first half with Kieran Fricko in the first half and then Owen Clouse in the second half when his shot off a direct kick just outside the box deflected off a Raiders defender.

The Raiders (2-7) cut it to what was the final score with 13:14 left in regulation when Brad Fiscus scored off an Isaac Reitz assist.

Brookville had ended an 0-21-1 stretch against Brockway the night before, beating the Rovers for the first time since 2010. The Raiders might’ve had some lingering effects from playing less than 24 hours before facing the unbeaten Bulldogs.

“If we would’ve played after Brockway, we would’ve probably done the same thing,” said Bulldogs head coach Ty Scott, whose team ended a lengthy losing streak to the Rovers last Tuesday as well. “We also haven’t played since Brockway, and I think we looked at Brookville’s record, I told the kids they would be disciplined and well-coached. We were lucky to scrap out a win, but that’s what you have to do some times.

“It was gritty, not pretty and in other years, we don’t pull out those kind of wins,” Scott summed up.

In the nightcap, the Lady Raiders scored 41 seconds into the game when Lauren Castellan arced a 25-footer off a direct kick toward the goal and it went off the hands of Lady Bulldogs goalkeeper Emma Kemmer.

Then with 5:42 left before halftime, Breanna McKendree’s long pass into the goal area was picked up by Hannah Lundgren who made it 2-0 and set the final.

“It was a good free kick they had, just over the keeper’s hands and the second goal was a miscommunication on marking up,” Lady Bulldogs head coach Mike Dawson said. “The second half we played better and we played with a little more urgency and that’s what we need to see for a full 80 minutes.

Brookville outshot Redbank Valley, 9-2, with goalkeeper Kerstyn Davie making the two saves, one of them denying Ember Hetrick on a penalty kick less than two minutes into the second half.

“When we have set pieces we have to convert. We did that at Punxsutawney, but we have to get more consistent with it moving forward,” said Dawson.

The Lady Bulldogs dropped to 3-3 going into Thursday’s trip to Karns City. They’ll play at 5 p.m. with the boys following at 7 p.m. Dawson hopes his team can shake off the frustration from a shutout loss to the Lady Raiders, who improved to 3-4-1. They had also beaten Brockway, 3-2 in double-overtime, Monday night.

“We couldn’t get into any rhythm,” he said. “We knew it would be physical by watching some film and reading in the paper. We had to keep our head more and it was tough to get into any rhythm with the long delays on everything with goal kicks and corner kicks. We went to the same rule meeting and that should be brought up for sure.”

Next week, the Bulldogs visit West Shamokin Monday and both teams host Elk County Catholic Tuesday with the girls starting the doubleheader at 5 p.m. Next Thursday, the Lady Bulldogs host Curwensville.