You are the owner of this article.
Edit Article Add New Article
You have permission to edit this article.
Edit
Welcome, Guest
Home
COVID-19
News
Sports
Obits
Opinion
Local Events
Announcements
Classifieds
Share This
1 of 4

Grace Preston stands with her largest order, the 84 “Quarantine Cutie” shirts ordered by Jefferson Penn Highlands for their residents. 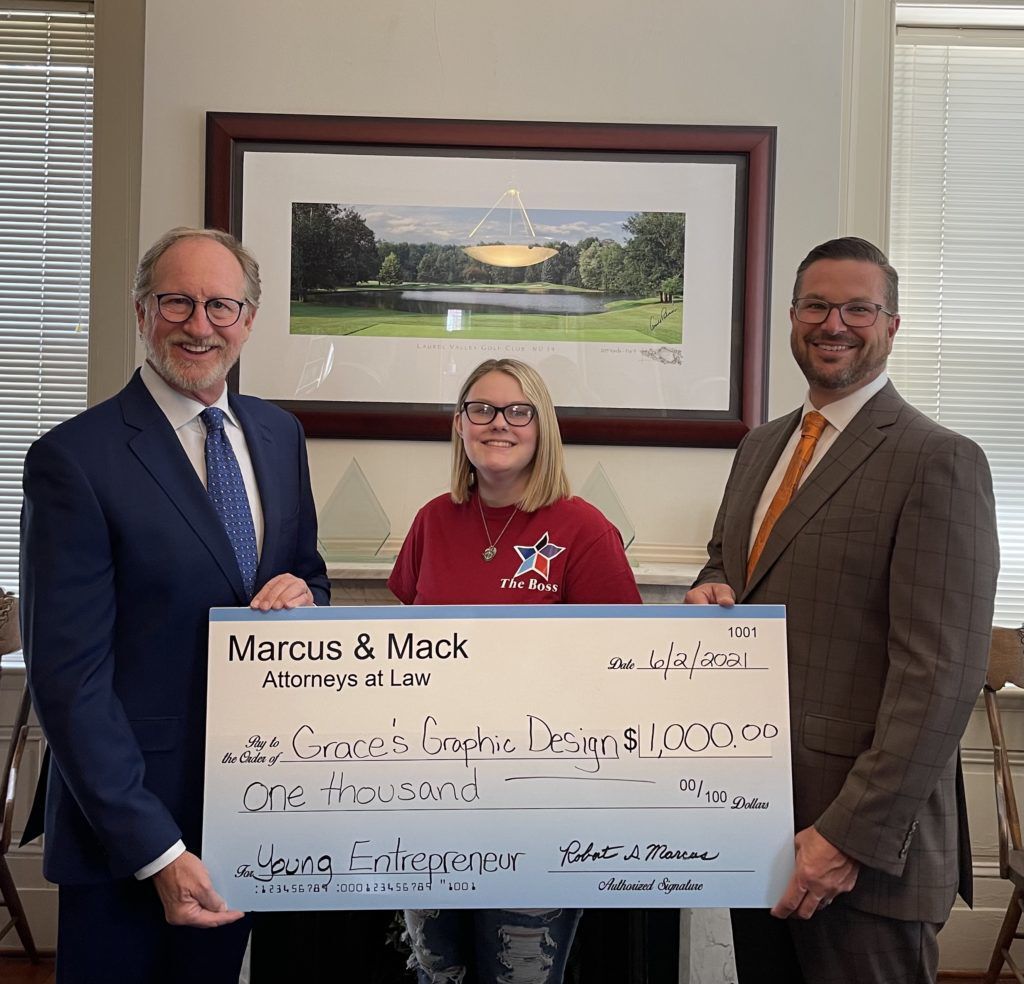 Robert Marcus and Bryan Neiderhiser present Grace Preston with a check for $1,000 for her business as the first ever Marcus and Mack Young Entrepreneur. 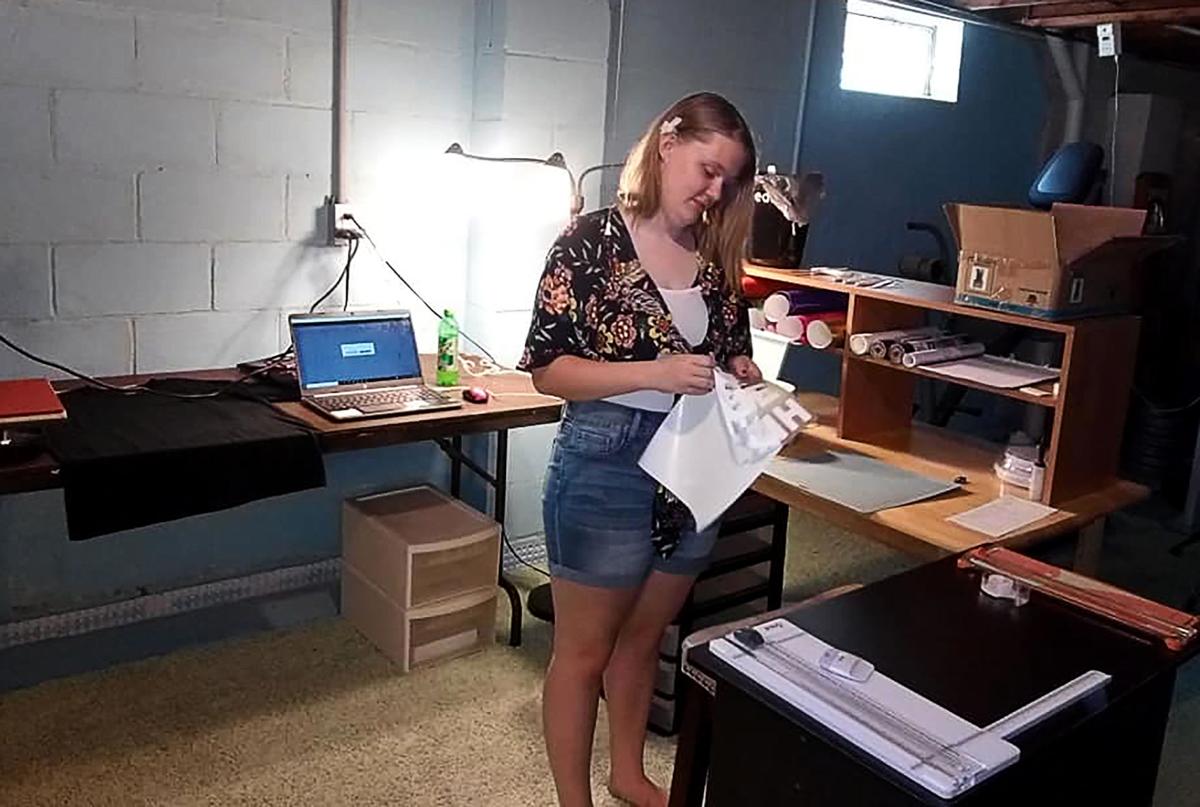 Grace Preston working in her workshop space her parents made for her in the basement. 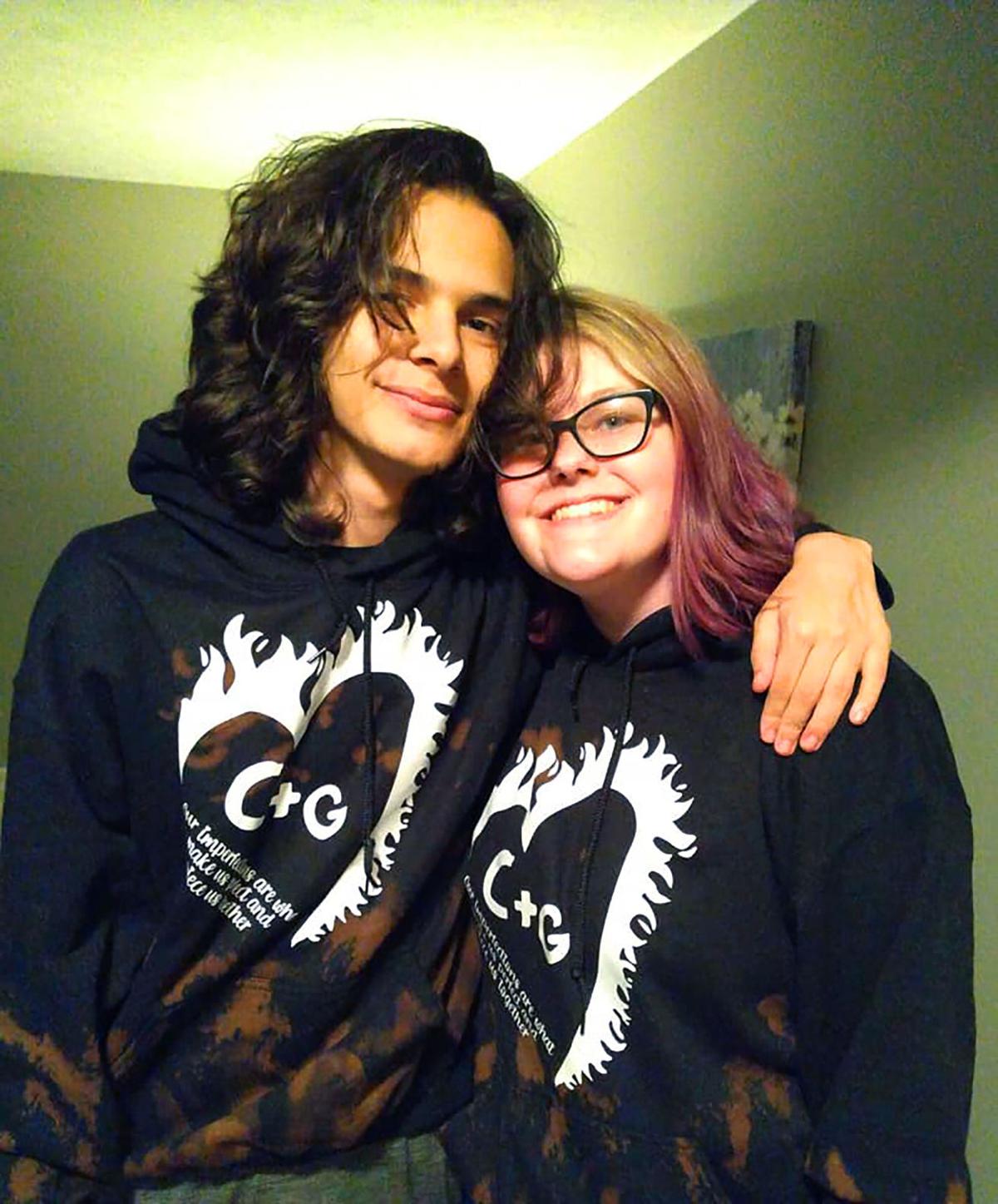 Grace Preston and her boyfriend Cisco Gourdin wearing the shirts she made with original artwork he created, and she digitized.

Grace Preston stands with her largest order, the 84 “Quarantine Cutie” shirts ordered by Jefferson Penn Highlands for their residents.

Robert Marcus and Bryan Neiderhiser present Grace Preston with a check for $1,000 for her business as the first ever Marcus and Mack Young Entrepreneur.

Grace Preston working in her workshop space her parents made for her in the basement.

Grace Preston and her boyfriend Cisco Gourdin wearing the shirts she made with original artwork he created, and she digitized.

BROCKWAY — Grace Preston was recently awarded $1,000 for winning the first ever Marcus and Mack Young Entrepreneur Nomination for her graphic design business and years of philanthropic donation to local animal charities.

Preston, 16, of Brockway, has been an entrepreneur since she was 8 years old when she first started Grace’s Goodies. This was a business making homemade dog treats, all natural flea and tick repellent spray and catnip toys and other pet products.

She sold these locally and donated all the proceeds from this business to local animal shelters. Over the last eight years, she has donated more than $14,000 to organizations like Gateway Humane Society, Willow Run Sanctuary and Adoptions, Animal Friends, StrayHaven Animal Shelter, and Animal Protectors of Allegheny Valley and the Horton Township Volunteer Fire Department – where she donated a pet oxygen mask kit, and the Jefferson County Human Officer –rabies gloves.

“We believe that Grace embodies the entrepreneurial spirit. Her contributions to charities throughout the years, and even as a young child, show the passion she has for making a difference and helping others. We are incredibly honored to have Grace win our first Young Entrepreneur Nomination,” a press release from Marcus and Mack reads.

Last year she became more interested in digital art and shifted her business into Grace’s Graphic Design. With this business, she still donates a portion of her proceeds to benefit animal charities, like sponsoring transports of rescued animals through organizations like Pittsburgh Aviation Animal Rescue Team.

She found a love for graphic design, and when her mother bought a Cricut she found she could use her graphic knowledge to make custom T-shirts, hats, and other merchandise.

“Just this past year when quarantine started, we decided to get a Cricut machine, just for fun. And then we ended up turning the baking business into a graphic design business,” Preston said.

Before getting the Cricut, she had created graphic artwork as a hobby with an art tablet that connects to the computer.

The first shirts she made were her “Senior Strong” design that she made for some of her friends last year. One of them had posted online about their senior year being so sad because of everything being canceled, so Preston designed the shirts.

As the first T-shirt design became more popular locally, Preston took over a corner of her mom’s office as her work space. Eventually, as the orders kept coming in, she had sheets of vinyl prepped to go on shirts all around the office.

When her parents realized her business was only going to get bigger, they moved her to the basement with her own work space for all her vinyl and materials. Most of her orders come from her Facebook page, Grace’s Graphic Design.

Her largest order so far has been for 84 “quarantine cutie” shirts for Jefferson Penn Highlands. Preston does all of the work herself, and would fold each shirt and put them in their own bag.

Preston’s school, DuBois Christian School, nominated her for the Marcus and Mack contest and sent her the information to fill out to enter.

“They didn’t tell me how many people were in it, but they did tell me that there was a kid from Harvard that also applied, and I came out over top of them, at the time I was in eleventh grade,” Preston said.

Since her business is based on custom orders and small orders, she has a niche base of being able to provide small orders for cheaper prices than larger T-shirt companies.

Her shirts usually cost about $15 for sizes small to extra-large and $18 for 2X or larger. She has also learned how to put original artwork into a graphic that can go on shirts.

Preston hasn’t done anything with the money, but is taking the time to decide if she wants to expand into screen printing or sublimation. This will allow her to make more complex or colorful designs than what she is currently able to do with the Cricut.

“She wants to go job shadow someplace where they do screen printing so she can learn more about it. Just which one’s more feasible for her small setup,” Sandy Preston said.

Her mom said she didn’t expect that Grace would just spend the money on anything, and is happy with how frugal she is being when it comes to expanding her business.

“Since she started, she has not wasted a single shirt. She has made mistakes, but she has either found a way to correct it so it’s not noticeable, or to reuse that shirt,” Sandy Preston said.

Grace Preston has plans to go to college for graphic design, and is looking at Harrisburg Area Community College for graphic and interactive design. She is also thinking about getting an associate’s degree in business management.

She has been working with an accountant for her business that shows her how to go about managing her business. She has a legitimate business license and tax number.

Preston is planning to take her graphic business with her to college when she goes. She and her parents have already been looking at what kind of space she’s going to need for housing to also have all of her tools and work space.