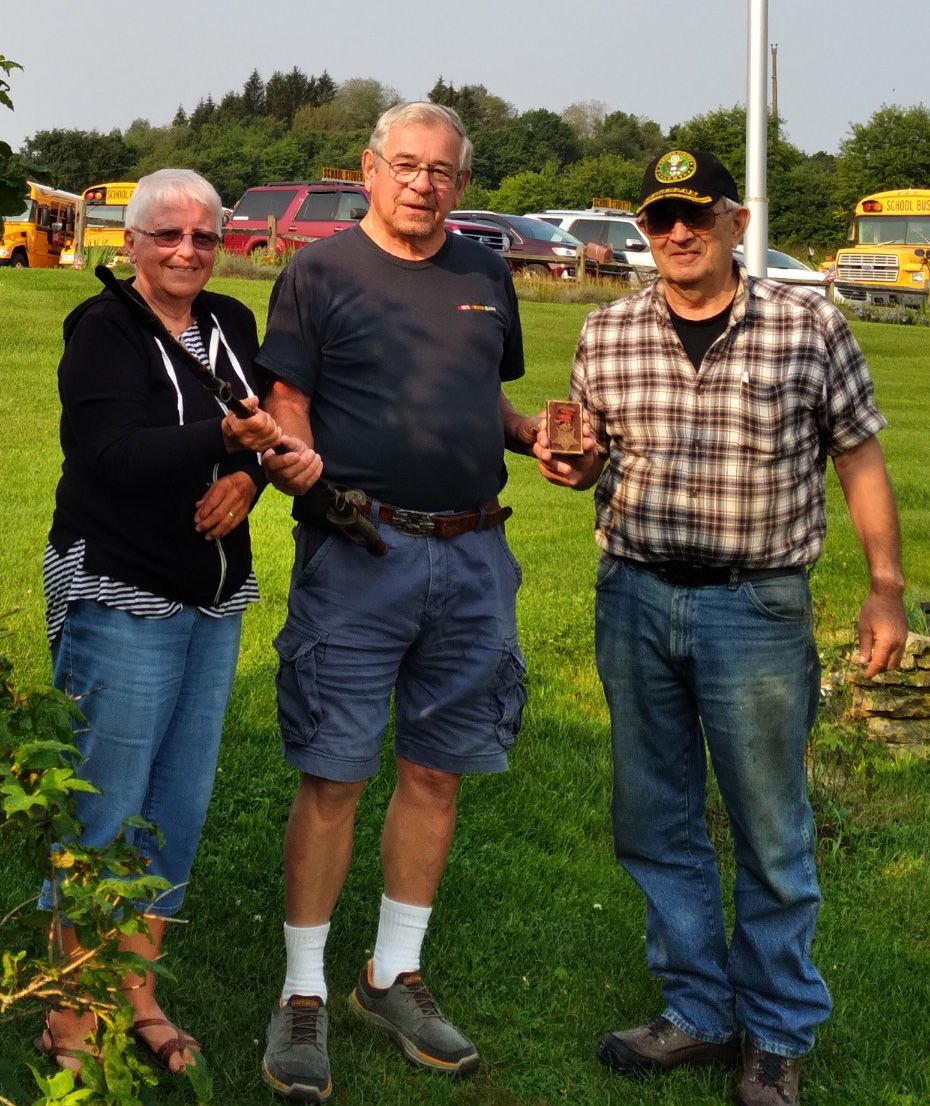 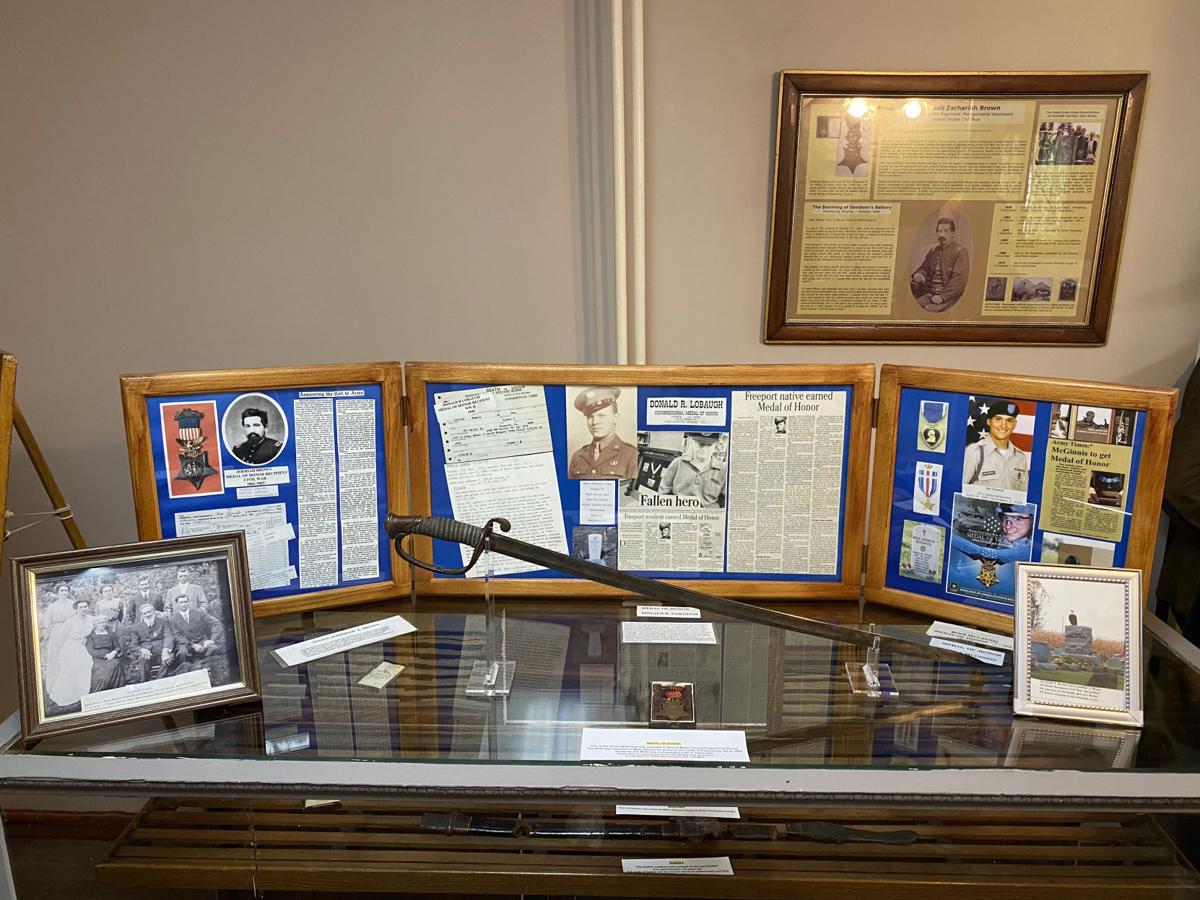 THE SWORD AND Congressional Medal of Honor belonging to Jeremiah Brown are now on display at the Donald R. Lobaugh Military Museum in Rimersburg. The display centers around the area’s three Medal of Honor recipients, including Brown, Lobaugh and Ross A. McGinnis. 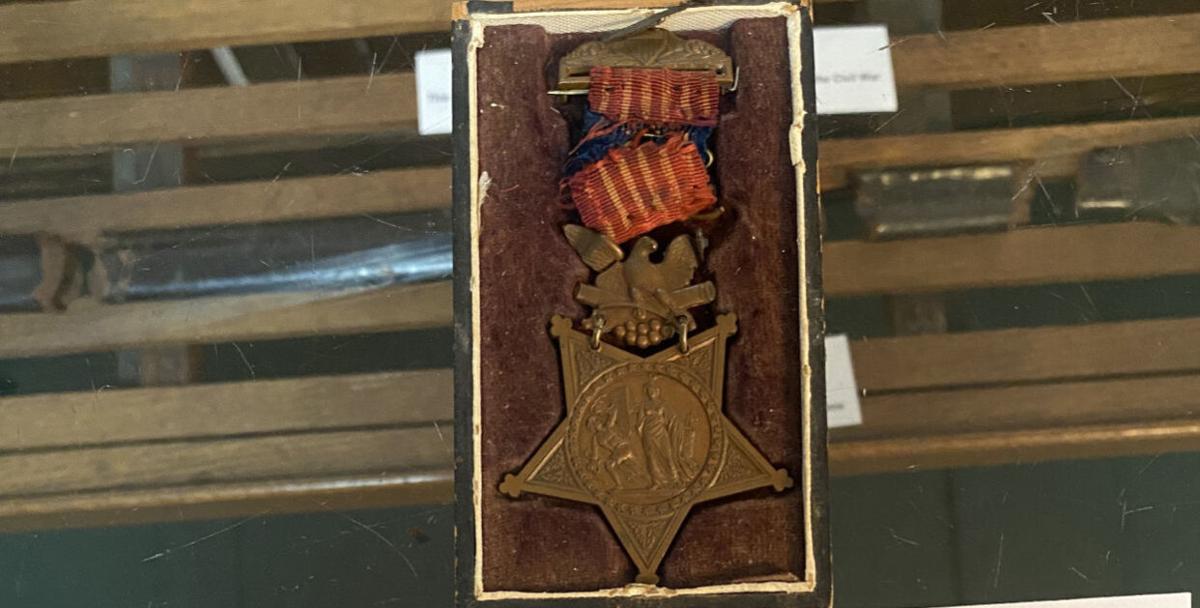 THE SWORD AND Congressional Medal of Honor belonging to Jeremiah Brown are now on display at the Donald R. Lobaugh Military Museum in Rimersburg. The display centers around the area’s three Medal of Honor recipients, including Brown, Lobaugh and Ross A. McGinnis.

The medal of honor, still in its original box, along with the sword carried in the war by Jeremiah Zachary Brown, can now be viewed at the Main Street museum as part of a display dedicated to the area’s three Medal of Honor recipients — Brown, who is buried in nearby Squirrel Hill Cemetery in Porter Township; World War II veteran Donald R. Lobaugh, buried in Rimersburg Cemetery; and Operation Iraqi Freedom veteran Ross A. McGinnis of Knox, buried in Arlington National Cemetery.

“We were pretty tickled to get these,” museum volunteer Terry George said this week of the new items, noting that the museum just recently opened after extensive repairs and renovations during the past couple of years. In fact, he said, the new artifacts arrived just in time for a recent tour by the Union High School Class of 1970.

George said Brown’s medal and sword, along with its scabbard, came to the museum after a surprise call from the local hero’s great-grandson and his wife, Denny and Barb Brown of Curllsville.

“They just called me out of the blue and asked if we’d be interested,” George said.

Denny Brown said on Friday that the museum is the best place for the important artifacts.

“If they are in a museum, that would be a more permanent and secure place for them, than floating around in someone’s attic,” he said, adding that his great-grandfather’s Civil War uniform has also been in the family for more than a century, but he said he was not aware where it is currently located.

Jeremiah Brown, born in Armstrong County in 1839, moved to Clarion County as a child, and became a school teacher in the Porter Township area. He had been enrolled for a year at Allegheny College in Meadville, when in 1862 he enlisted in Company K of the 148th Pennsylvania Volunteers Infantry.

A history of Brown’s life notes that he “saw some of the most fierce fighting of the Civil War” during his three years of service.

In October 1864, Brown’s place in history was secured when he volunteered to lead 100 men in storming Davidson’s Battery during the Battle of Petersburg, Va.

“We formed in line inside our works about twilight, and after receiving instructions from General Mulholland to reserve our fire until we got close to the fort, we fixed bayonets and started on the double quick and got within about 200 years of the fort before the enemy’s pickets opened fire on us,” Jeremiah Brown recalled after the war. “Advancing rapidly, out first trouble was with the chevaux-de-friese in front of the fort’s trench. It was wired and roped together and after some of my men had cut an opening with axes, I threw the chevaux-de-friese around, right and left, and my men charged rapidly and most gallantly through the opening.

“We jumped the ditch, which was full of water, and scaled a rampart. I rushed up the embankment, my boys with me, in the face of a galling fire, and jumped right into the fort. As General Burnside had mined and exploded a fort some distance to the right about three months before this, the enemy had dug a hole like a well about 40 feet deep just within the parapet of the fort we charged, and when I jumped over it I lit within four meters of the hole, at the peril of my life. There was a bombproof embankment just inside the fort and the rebel artillery men were hurrying up with grape and canister to change their guns for use on the assaulting column.”

Brown then encountered a rebel officer, drawing his sword on the man and demanding he hand over his sword. Brown recalled that the sword “was promptly handed over and also the swords of two other rebel officers and all were passed back to my men.”

“We captured a large number of men, but the majority of rebels ran out at the rear of the fort and escaped,” Brown said after the war. “I stayed within the fort half an hour and looked in vain for reinforcements and could not then understand why they did not come.”

What Brown later learned was that his task was supposed to have been a suicide mission to divert General Robert E. Lee’s attention away from the main goal of the Union forces that day.

“The 100 men that Capt. Brown led — and including Brown himself — had been considered as sacrifices to accomplish the diversionary feat,” the history books state.

For those actions, Brown, who had been promoted to the rank of major, received the Congressional Medal of Honor that now resides in the Rimersburg museum.

But as George noted last week, the medal didn’t come right away for the local soldier.

“Thirty-two years later, he got it through the mail,” George said, adding that there was no big ceremony or celebration, just a package in the mail.

After the war, Brown had returned home to Clarion County where he lived out his life with his wife, Mary Jane, and their seven children. He died in 1916 at the age of 76.

“All I know about him is what people told me,” said Denny Brown, himself an Army veteran. He is descended from the Civil War hero through his grandfather Arnold Brown, Jeremiah’s youngest son.

“We never really talked a whole lot about it,” he said, noting that his famous relative would receive the attention he deserved on special anniversaries of the war or his death.

George said anyone is welcome to come see the newly acquired artifacts, with those interested asked to call him at (814) 229-7898 to schedule a tour.

He explained that while most work on the museum is complete, projects are still taking place, and donations are being accepted to help fund the efforts. The museum is also looking to acquire more display cases, as well as mannequins to display military uniforms.

“It’s still a moving target, but we’re working at it,” George said of the museum updates.