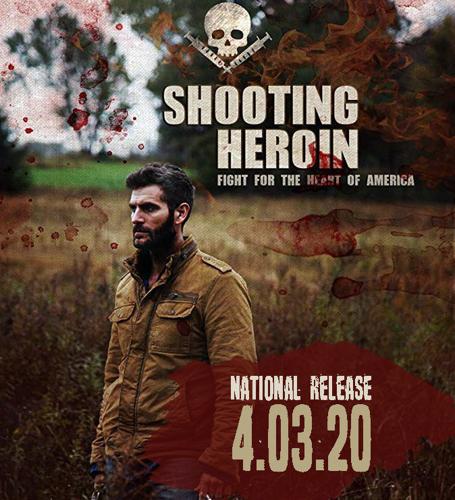 Folmar – who wrote, directed and produced the movie – held the film’s world premiere at the Rowland Theatre in Philipsburg on Oct. 17 and it saw a limited release locally and around the state. But on April 3, the movie is set to be seen by the masses with its national release in theaters, as well as online and cable platforms.

Folmar said the movie “is about a small town community that comes together to fight back against the spread of drugs by any means necessary.”

“I am most proud of making this important film on an important subject matter with a limited budget and a very quick schedule – two weeks,” Folmar said. “It was truly a feat making this film but wouldn’t be possible without my great cast and crew and the incredible support I had from my hometown community. So many extras, businesses and municipalities made this movie possible in central Pa. I enjoyed the theatrical tour and local premieres tremendously – such a gift to engage with the area that inspired this movie and to hear the stories of lives changed.”

Folmar said this was the first year he submitted a film to the Hell’s Kitchen Film Festival, which takes place in New York City.

“There were films in competition from all over the world,” Folmar said. “It was a three day long event that showed over 100 films.”

“When you make a movie – especially as the writer – it is all sort of a theory that this idea that only existed in my head will work,” Folmar said. “Given the subject matter of Shooting Heroin, not only did my fictional idea need to work and resonate with other people for the sake of the story, but more importantly for the sake of the epidemic and all the neighbors we keep losing daily to this tragic crisis. So I felt the weight of responsibility on my shoulders to do this subject matter justice. Winning these awards felt like a slight weight lifted knowing that we made a quality movie that hopefully will change and save lives.”

With its nationwide release, Folmar said locally people will be able to view the film at the Ritz Theatre in Clearfield and the Rowland later in April.

“It will also be in State College and Altoona for at least one whole week in theaters,” Folmar said.

The film will also be available to rent online with Amazon, iTunes, Vudu, etc. and all cable/tv platforms such as DIRECTV, Dish, Comcast, InDemand, Premiere and others.

“The movie is being distributed theatrically by Veritas Films and online and cable by Stone Cutter Media,” Folmar said.

Aside from the making and distribution of “Shooting Heroin,” Folmar has kept quite busy. He has been involved with distributing independent films that includes “Warning Shot” – which starred David Spade, Bruce Dern and James Earl Jones – and he has created a partnership with his own Veritas Theatres chain in major cities.

The first theater he purchased was the Guthrie Theatre in Grove City – which is a 600-seat theater that now features live entertainment and a “Cinema Grille” steakhouse in connection with it – and has acquired two theaters in the Dallas region. Folmar said he is now looking at purchasing/building theaters in Orlando, Chicago, New York City and Los Angeles.

“I was frustrated by the lack of reputable and compelling options for independent filmmakers to have a proper theatrical distribution with a distribution partner,” Folmar said. “Making a movie is really tough. Unfortunately, selling a movie and making your money back can be even more difficult. I want to change the way film distribution – especially for indie filmmakers like myself – can see their movie on the big screen and make a buck.”

Folmar said he fell in love with cinema by going to area theaters, such as the Rowland, the Ritz and Super 322.

“It is so rewarding to now preserve historic theaters and allow filmmakers to see their hard work and ideas on the big screen,” Folmar said.