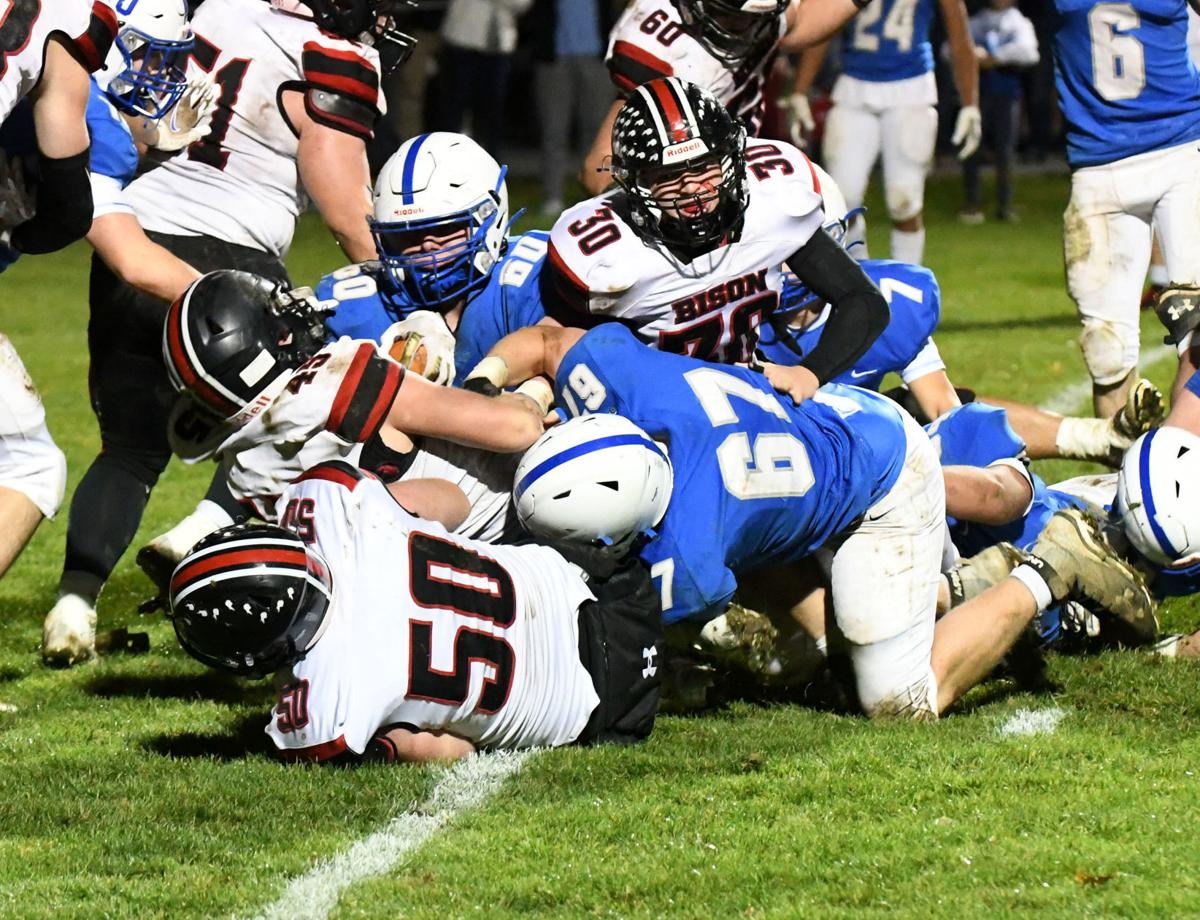 Clearfield’s Carter Chamberlain (45) powers his way into the end zone on a 4-yard touchdown run late in the first half Friday against Bedford. 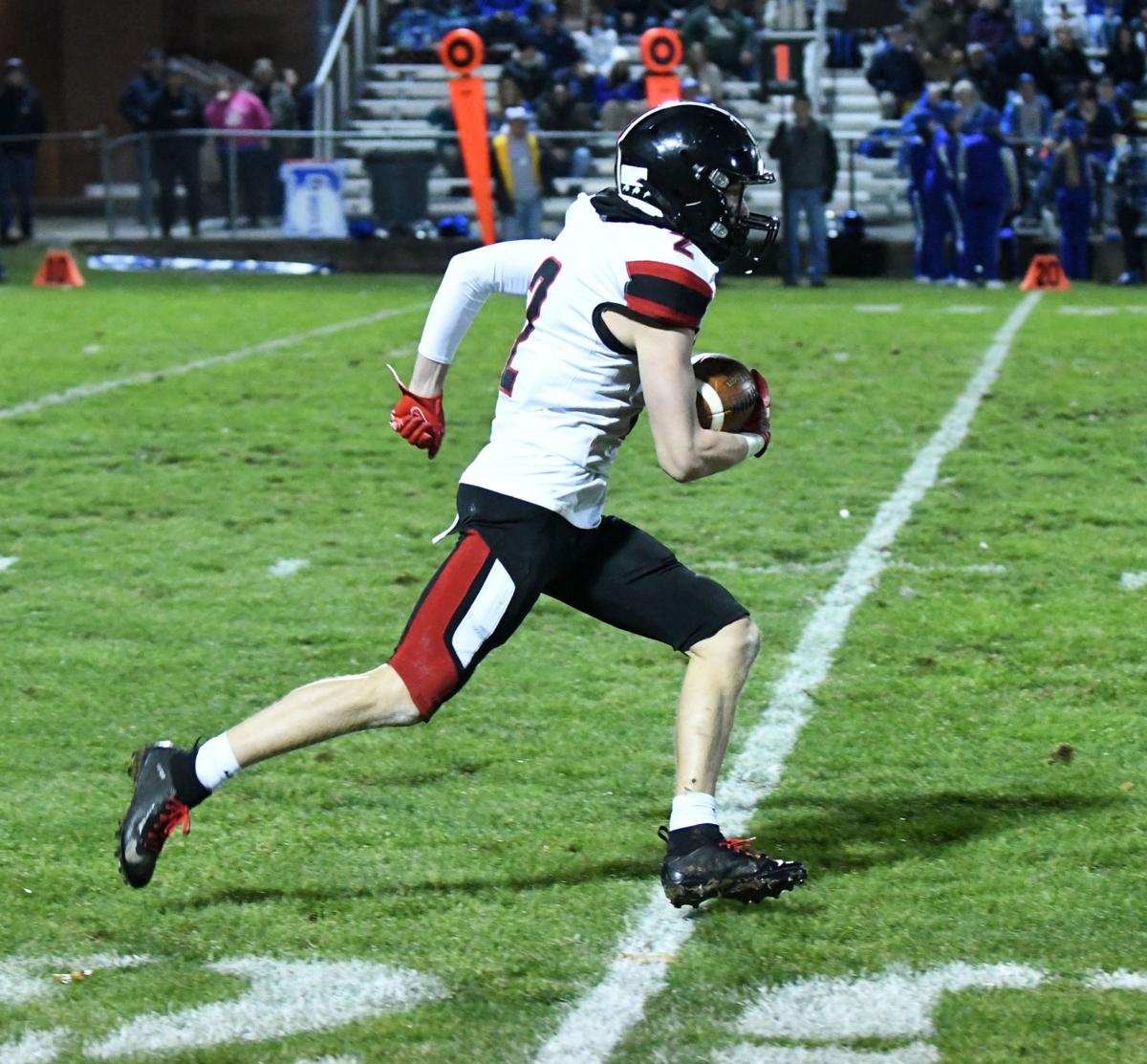 Clearfield’s Karson Kline takes off up field on his 87-yard kickoff return for a touchdown in the first quarter Friday night against Bedford in the District 5/9 Class 3A subregional championship game. 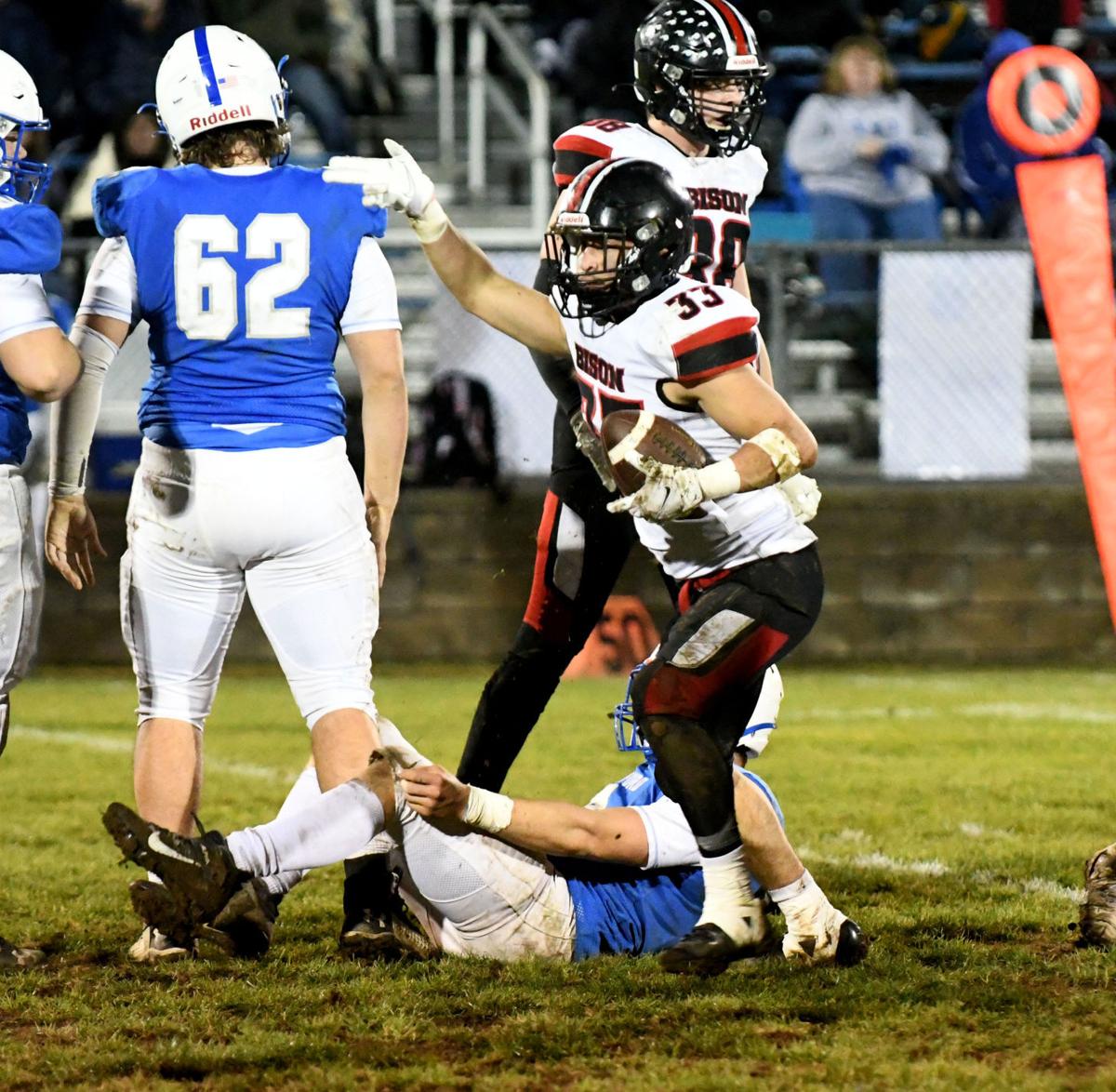 Clearfield’s Jose Alban (33) points in Clearfield’s direction after recovering a fumble by Bedford quarterback Mercury Swaim late in the first half Friday night.

Clearfield’s Carter Chamberlain (45) powers his way into the end zone on a 4-yard touchdown run late in the first half Friday against Bedford.

Clearfield’s Karson Kline takes off up field on his 87-yard kickoff return for a touchdown in the first quarter Friday night against Bedford in the District 5/9 Class 3A subregional championship game.

Clearfield’s Jose Alban (33) points in Clearfield’s direction after recovering a fumble by Bedford quarterback Mercury Swaim late in the first half Friday night.

BEDFORD — The District 5/9 Class 3A title came down to the battle of the Bison(s) for a second straight year, and for the second straight time Bedford took home the championship with a win against Clearfield.

Bedford won the title 40-21 last year in Clearfield and came away with an even more lopsided victory, 54-12, Friday night on its home field at Bedford Bison Stadium.

The teams traded scores to open the game, but then Bedford took control of things with three consecutive touchdown drives to build a 27-6 lead just past the midway point of the second quarter.

Clearfield countered with a score of its own to make it 27-12 with 1:10 left in the half before a huge momentum swing happened. Clearfield forced a fumble from Bedford quarterback Mercury Swaim, with Jose Alban recovering it at the Bedford 44.

Clearfield quickly picked up a pair of first downs before a Bedford sack of Oliver Billotte stalled the drive and allowed the hosts to take a 27-12 lead into the break.

The visitors got the ball to start the third quarter and quickly found themselves in Bedford territory on a 21-yard pass play by Billotte to Justin Critchfield. Clearfield picked up another first down before Bedford forced a turnover on downs.

Those two missed scoring chances around halftime proved to be Clearfield’s undoing in trying to get back into the game. It was all Bedford from there as the hosts scored 27 straight points, including a pair of pick sixes, in the final 10:44 of the game.

Bedford finished with a 392-206 advantage in total yards, posting a perfectly balanced 196 yards on the ground and 196 yards through the air.

Swaim and Max Washington powered Bedford in the win.

Swaim completed 12 of 18 passes for 196 yards and a touchdown and ran for 63 yards and two more scores. Washington had five carries for 71 yards and a TD and added two catches for 95 yards and a score. He also had a 68-yard pick six.

Karson Kline led Clearfield with seven catches for 72 yards and scored his team’s opening touchdown on an 87-yard kickoff return. Billotte was 12 of 23 passing for 121 yards with an interception.

“Well, obviously things didn’t go our way tonight in all facets,” said Janocko. “We didn’t get a break anywhere. And, the score wasn’t indicative of the game. Things got out of control there in the fourth quarter.

“Our kids competed well all year, and we had a great year ... won a league championship, won a district championship and went undefeated (in regular season). Sometimes in big games things don’t go your way and this happens.”

Bedford took the opening kickoff and needed just five plays to find the end zone on a 6-yard run by Washington. Lizzy Martz’s extra point made it 7-0 just 2:42 into the game.

Kline answered right back with his long touchdown return on the ensuing kickoff. However, Luke Sidorick’s extra point was off the mark as Bedford led 7-6.

Bedford countered with a long 14-play, 75-yard scoring march that Swaim capped with a 1-yard plunge. Martz’s kick made it 14-6 late in the first quarter.

Bedford’s defense then forced a quick punt, giving its offense a short field near midfield. Ethan Weber hit paydirt from nine yards out three plays later. Washington then scored on a lateral from 57 yards out on Bedford’s next possession to push the lead to 27-6 with 5:23 remaining in the first half.

Trailing by three scores, Clearfield put together one of its best drives of the night late in the half.

Kline hauled in a 28-yard catch on third-and-5 to jump-start the drive. Billotte then hit Kline for 17 more yards to put Clearfield at the Bedford 26.

Mark McGonigal kept the drive going with a 6-yard run on third-and-1 before Carter Chamberlain punctuated things with a 4-yard TD run. The extra point was blocked.

Swaim then put the ball on the ground on Bedford’s ensuing possession, with Alban pouncing on the loose ball to give his team a chance at a late score. Unfortunately for Clearfield, the Bedford defense stood tall in the final minute to preserve the Bisons’ 15-point lead at the break.

Clearfield tried to make some noise to start the second half, as Justin Critchfield hauled in a 21-yard catch on the second play. Billotte later extended the drive with a hard-earned seven yards on a QB sneak on fourth-and-1.

Bedford forced a turnover on downs four plays later though, as Kline came up just short a first down in the sideline on a 9-yard catch on fourth-and-10.

Bedford then all but salted the game away with a 19-play, 77-yard touchdown drive that ate up 8:24 off the clock. Swaim capped that scoring march with a 13-yard run up the middle with 10:44 left in the game.

The hosts were far from done scoring though.

Washington scored less than two minutes later when he picked off a Will Domico pass and returned it 68 yards for a touchdown. Domico had to come in for the play when Billotte was injured being sacked on the previous play.

After Bedford forced a punt, Washington was back in the end zone on Bedford’s next offensive play as he caught a slant pass and sprinted 78 yards to the house.

Weber closed out the scoring when he picked off Billotte and returned it 26 yards for a score with 5:01 to play.