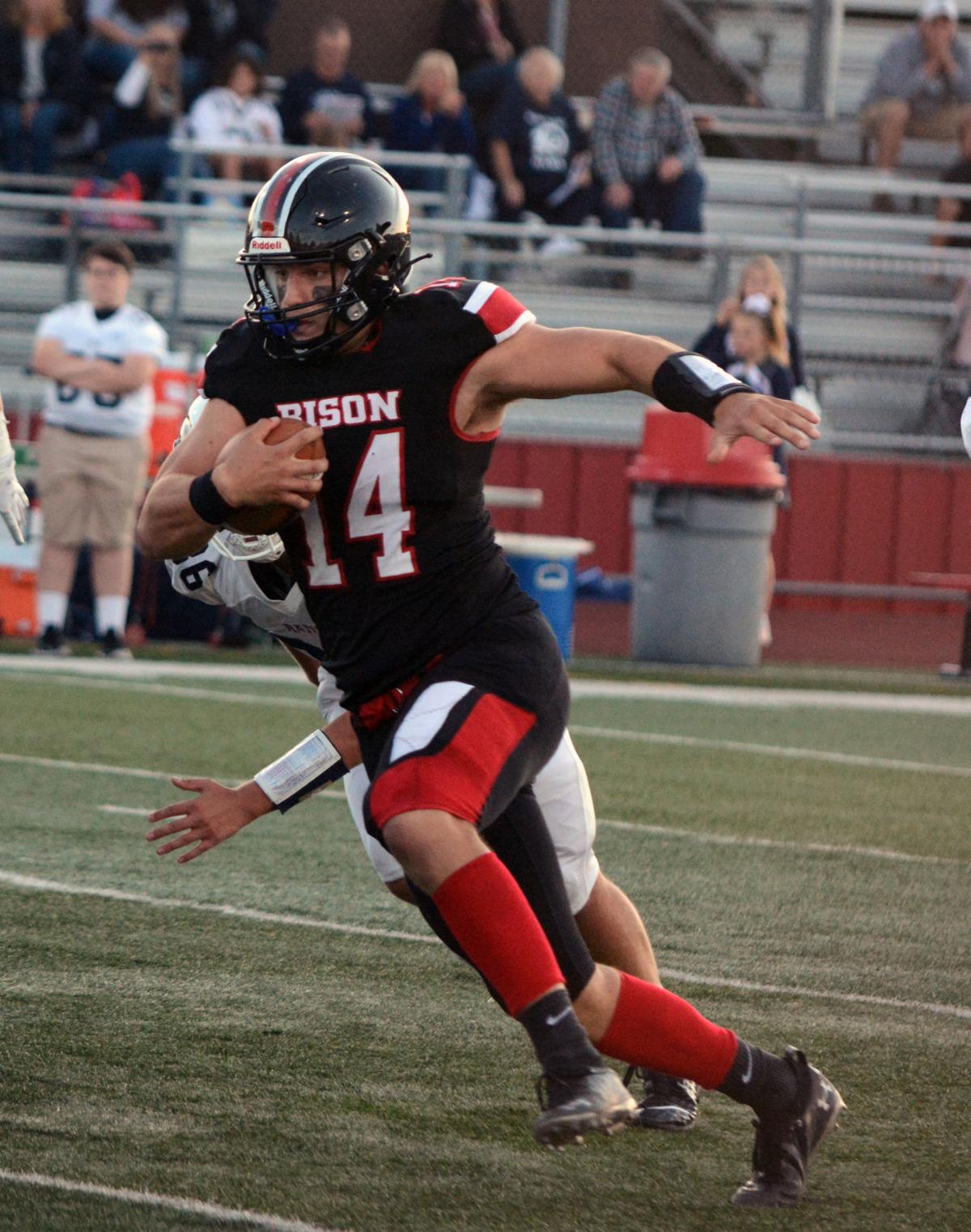 Clearfield’s Oliver Billotte runs for a first down during Friday’s game against Penns Valley. Billotte ran six times for 51 yards and three scores, while also passing for 133 yards in a 53-7 win. 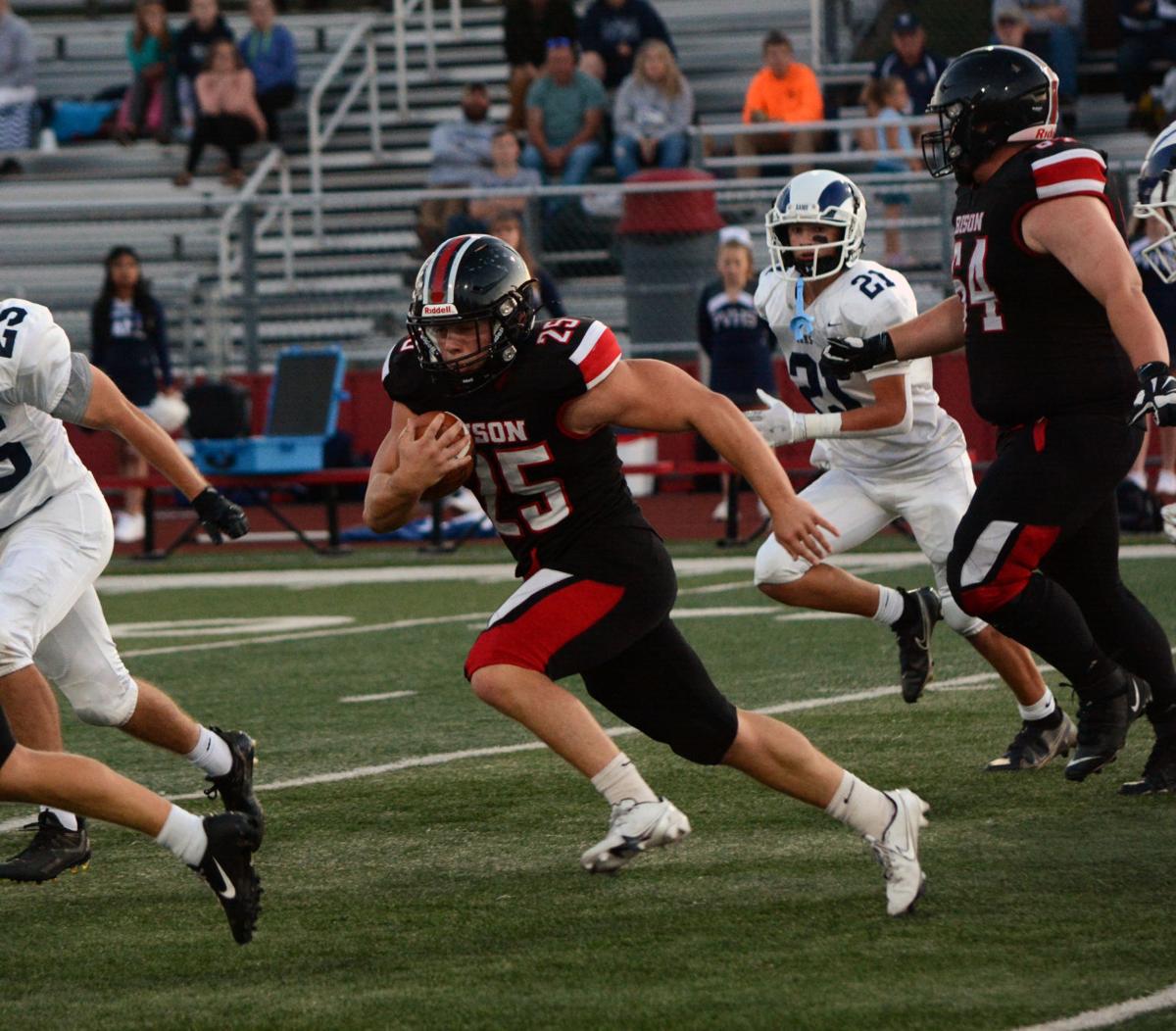 Clearfield running back Mark McGonigal finds a big hole to run through during the Bison’s 53-7 win over Penns Valley Friday evening at the Bison Sports Complex. McGonigal ran 20 times for 172 yards and two touchdowns in Clearfield’s 53-7 victory.

Clearfield’s Oliver Billotte runs for a first down during Friday’s game against Penns Valley. Billotte ran six times for 51 yards and three scores, while also passing for 133 yards in a 53-7 win.

Clearfield running back Mark McGonigal finds a big hole to run through during the Bison’s 53-7 win over Penns Valley Friday evening at the Bison Sports Complex. McGonigal ran 20 times for 172 yards and two touchdowns in Clearfield’s 53-7 victory.

HYDE — Clearfield ran the ball 47 times for 403 yards in Friday’s game against Penns Valley, overcoming a couple early hiccups to surge to a 53-7 victory at the Bison Sports Complex.

Mark McGonigal led the potent Clearfield ground attack with 172 yards on 20 carries, while four other Bison ran for at least 44 yards.

“We wanted to run the ball. We needed to set the tone doing that,” Clearfield head coach Tim Janocko said. “Our offensive line executed and our backs ran really hard.

“We did turn the ball over a couple times in the first quarter, so we need to fix that. But other than that we did what we wanted to do as far as establishing the run.”

The Bison trailed 7-6 after one quarter despite outgaining the Rams 124-17 in total yards. Penns Valley’s Miles Brooks picked off Clearfield quarterback Oliver Billotte and returned the ball 42 yards for a score to give the Rams the 1-point lead.

The Bison also fumbled on the next possession, giving the visitors the ball on the Clearfield 34, but Penns Valley turned it over on downs at the 20-yard line six plays later.

It was all Bison after that as they scored 20 points in the second quarter to take a comfortable 32-7 advantage to the half.

“The kids responded, but again there are some things we need to fix as we go through the season,” Janocko said. “We have to be a little better with that.”

Billotte, who scored on a 17-yard run in the first quarter, dragging three Ram defenders into the end zone, gave the Bison a 12-7 lead with 9:31 to go in the first half when he finished off an 80-yard drive with a 5-yard score.

McGonigal had a 33-yard run early in the series and Billotte connected with Jose Alban for a 15-yard gain to convert a third down. Billotte hit on nine of his 16 pass attempts for 133 yards in the contest.

After the Bison defense forced a three-and-out and Penns Valley punted for just 14 yards, Clearfield needed just two plays to cover 31 yards. Billotte and Karson Kline connected on a 24-yard pass play before McGonigal scored from 7 yards out. Billotte ran in the 2-point conversion to make it 20-7.

The Bison defense gave its offense the ball back again with great field position at the 42 after stopping the Rams on downs. Clearfield set up shop at the 42 and went on a 10-play, 58-yard drive that culminated with Billotte’s third rushing TD of the game, a 2-yard score.

“Our defense continues to put us in a situation where we can dominate games as long as that front seven really gets after it, and that helps our secondary,” Janocko said.

The Bison went ahead 32-7 with 6:01 to go in the third on an Alban 1-yard plunge. Alban, who ran 13 times for 66 yards in the game, accounted for 30 yards on the ground in the series, while Billotte found Will Domico for a 38-yard pass play.

That was the last time Billotte attempted a pass in the game as Clearfield’s last three possessions were all runs and each series ended in the end zone.

Carter Chamberlain finished off a 4-play, 43-yard drive with a 1-yard score and Cayden Bell scampered 40 yards for the final Bison TD with 2:07 left to play.

Chamberlain ran for 44 yards on four carries, while Bell rushed for 70 yards on 4 totes.

Clearfield held a 26-6 advantage in first downs and piled up 536 yards of total offense. Penns Valley had just 86 yards of offense.

Penns Valley’s Rylee Brungart completed five of his 12 passes for 45 yards. Jackson Romig ran one time for a team-high 16 yards on the Rams’ final series.

“There are some things we need to clean up and get better at,” Janocko said. “We have Tyrone next week and I know what that is going to be like. We can’t turn the ball over down there. We’ll be down 21-0 real quick.

“So there are some things we have to fix, but I credit our kids for gutting it up and doing a good job. It was a whole team effort.”