Skip to main content
You are the owner of this article.
Edit Article Add New Article
You have permission to edit this article.
Edit
Welcome, Guest
Home
COVID-19
News
Sports
Obits
Opinion
Local Events
Announcements
Classifieds
Share This
1 of 4 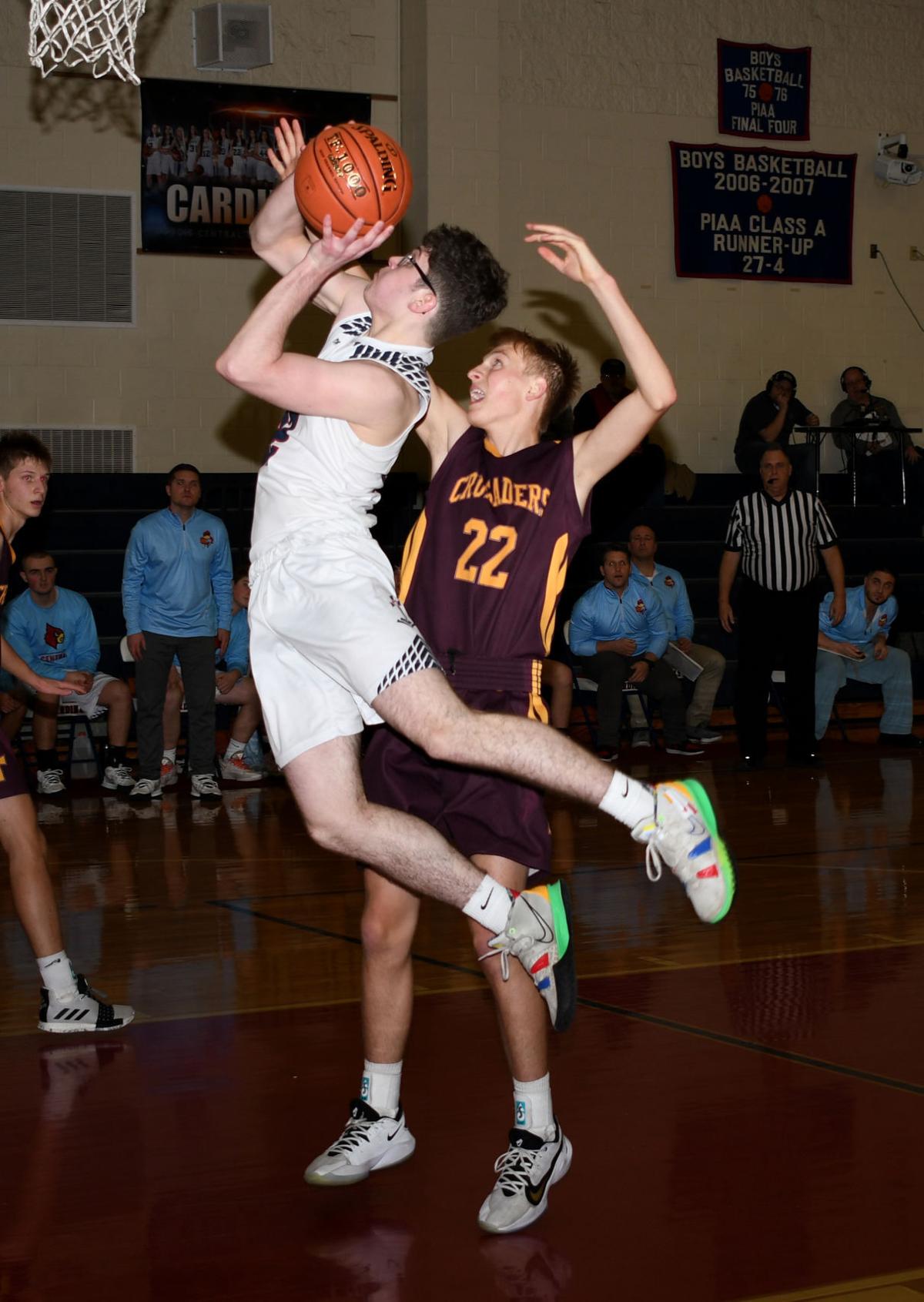 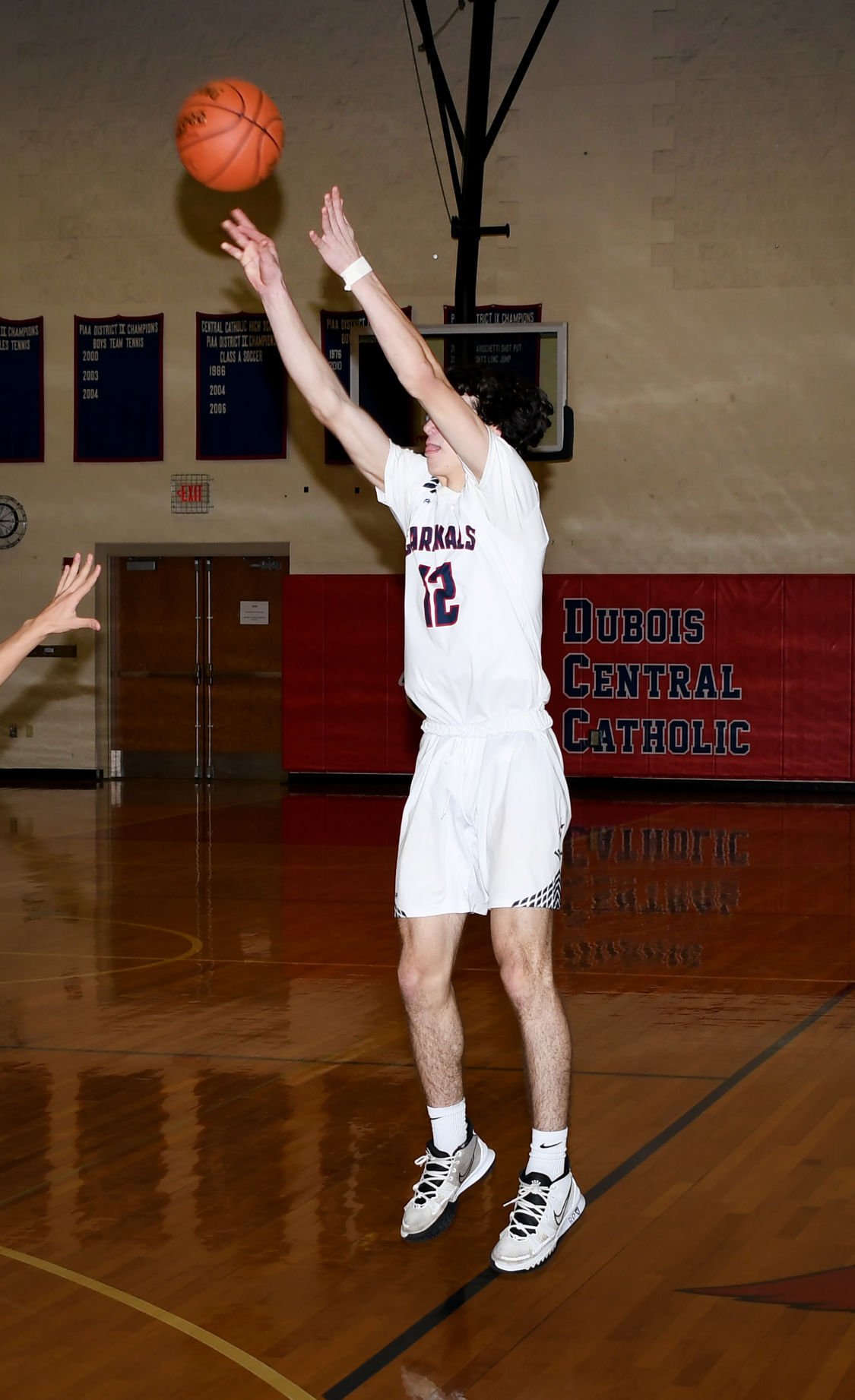 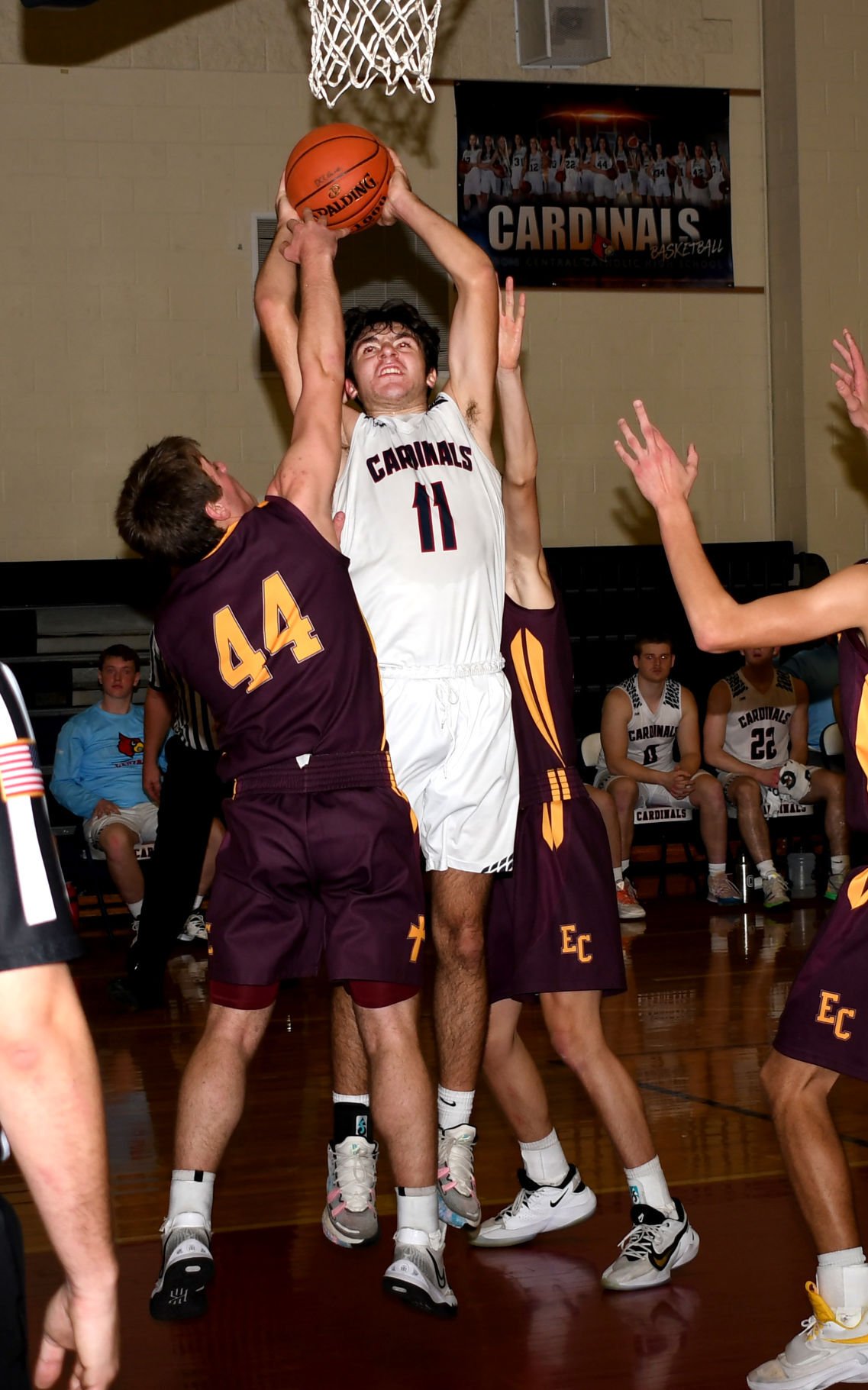 DuBois Central Catholic’s Alec Srock (11) is fouled as he goes up strong to the basket against Elk County Catholic’s Charlie Breindel (44) after pulling down an offensive rebound Friday night. Srock had 12 points and 10 rebounds in a 46-41 win vs. the Crusaders. 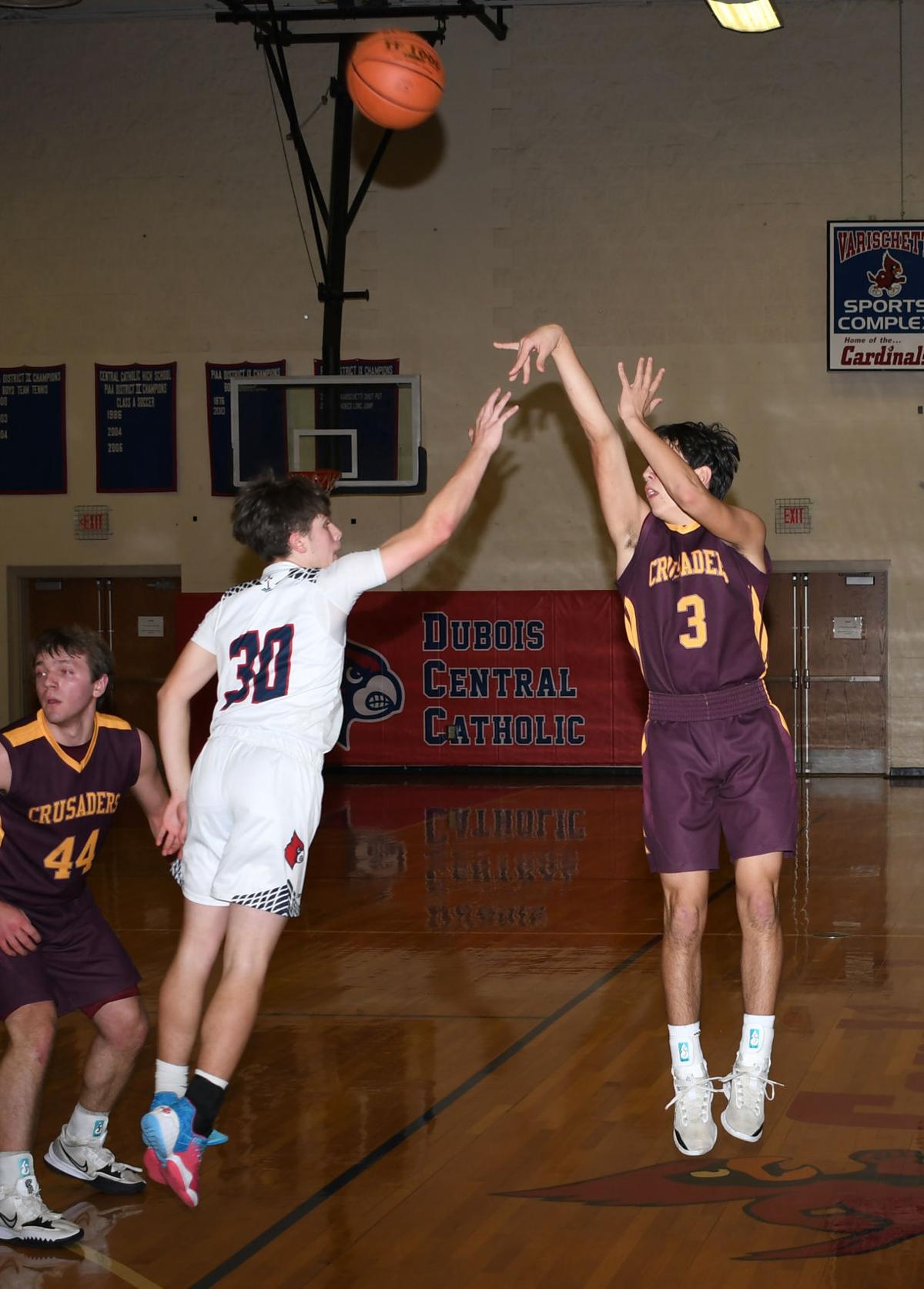 Elk County Catholic’s Luke Wasko (3) shoots a 3-pointer over the outstretched arm of DuBois Central Catholic’s Brayden Fox in the closing seconds of the first half Friday night. Wasko missed the shot but hit four treys on the night for 12 points. Fox’s only points came on a pair free throws with 19 seconds left that helped seal DCC’s 46-41 come-from-behind victory.

DuBois Central Catholic’s Alec Srock (11) is fouled as he goes up strong to the basket against Elk County Catholic’s Charlie Breindel (44) after pulling down an offensive rebound Friday night. Srock had 12 points and 10 rebounds in a 46-41 win vs. the Crusaders.

Elk County Catholic’s Luke Wasko (3) shoots a 3-pointer over the outstretched arm of DuBois Central Catholic’s Brayden Fox in the closing seconds of the first half Friday night. Wasko missed the shot but hit four treys on the night for 12 points. Fox’s only points came on a pair free throws with 19 seconds left that helped seal DCC’s 46-41 come-from-behind victory.

The Cardinals trailed by 10 points early in the second quarter and later by six (38-32) late in the third quarter before putting together a memorable comeback to capture head coach Dom Varacallo’s first win against ECC and the program’s first in more than a decade vs. the Crusaders.

The last time a Cardinals squad walked off the floor with a victory against the Crusaders was the District 9 Class A championship game in early March of 2010.

That team, led by head coach Mike Nesbit and junior Chris Marshall, bested ECC, 49-45, to give DCC its first district title in 34 years as part of a 21-win season. That also was the last of six straight wins at the time for DCC against ECC, with the Crusaders owning the rivalry ever since until Friday night.

Central Catholic (6-3) used a balanced offensive attack — putting three players into double figures in Green (13), Alec Srock (12) and Swisher (10) — and strong defensive effort in the fourth to rally. Srock also had 10 rebounds to post a doube-double.

The Cardinals held ECC to just three points and no field goals in the fourth as they outscored the Crusaders, 11-3, in the final eight minutes.

Central took the lead for good on a hoop by Jalen Kosko with 2:06 to play before freshman Brayden Fox and junior Brendan Paisley each went 2-for-2 at the line in the final 20 seconds to seal the victory. Those were the lone points for that duo, while Kosko finished with six.

“Tonight, and leading up to this week, we were very fortunate to have the schedule the way it was and be able to prepare for Elk County,” said Varacallo. “The guys locked in, and this was definitely an indentity week for us. We relly found out who we were in practice prior to this game.

“Everybody studied film and executed the game plan — not perfectly, but well enough to beat an outstanding Elk County team. I have so much respect for Coach (Aaron) Straub and for what he has been able to do. You just have to continue to chase him, and he and his program makes us all better (in doing that).

“We have to continue to push, and I still think we have opportunities to improve. But, it was definitely an identity week for us, and I was very proud to wear this Cardinal on my chest and of the guys tonight for showing pride for their school and finding a way to get the job done. This was a total team effort tonight.”

Points came at a premium early in the first quarter, as the teams found themselves tied at 3-3 past the midway point of the period. Elk County (7-2) then put together an 8-2 spurt to go up 11-5. Luke Jansen had five of those eight points, while Jordan Wasko hit a 3-pointer.

Swisher scored in the final second for DCC, though, to make it 11-7 after one quarter.

Elk County responded a 9-3 run to open the second to quickly push its lead to 10 at 20-10 at the 5-minute mark. Charlie Breindel had five of those points for ECC, but he would score just three more the rest of the night.

Varacallo took a timeout, and whatever he said to his team calmed them down, as the Cardinals rattled off six straight points, four by Green, to promptly make it a 20-16 game. Jansen and Srock then traded hoops as ECC eventually took a 22-18 advantage into the half.

Wasko drilled a 3-pointer in the opening minute of the third to push the ECC lead to seven, but DCC again answered — this time scoring eight straight to take its first lead of the game at 26-25.

Srock started the spurt with an old-fashion 3-point play before Swisher scored inside. Green then nailed a 3-pointer to put DCC up for the first time. Wasko countered right back with a trey of his own as the teams traded scores in the middle of the quarter.

It appeared ECC had grabbed the momentum back late in the quarter with an 8-0 spurt that featured a Wasko three, Colby Nussbaum 3-point play and Breindel reverse layup that put the Crusaders up 38-32 with 50 seconds left in the third.

Little did those in attendance know, but that nice inside move by Breindel would be ECC’s last field goal of the game.

Green hit his second trey of the third with 33 seconds left to cut DCC’s deficit in half at quarter’s end, 38-35. Green scored his game-high 13 points between the second and third quarters.

Central Catholic pulled even again at 38-38 in the opening minute of the fourth as Srock went 1 of 2 at the line and Kosko scored a hoop.

Jansen countered by going 2-for-2 at the foul line to put ECC back up, but Srock countered with two free of his own to knot things again at 40-40.

Both teams then went nearly three minutes without scoring before Breindel went 1 of 2 at the line to give ECC its final lead at 41-40 with 2:27 to play. The Crusaders never scored again.

Kosko put DCC back up shortly thereafter with just over two minutes to play, then Fox and Paisley hit their clutch free throws in the closing moments to seal a huge win for the Cardinal program.

“The game came down to we got stops but then we didn’t get boards,” said ECC coach Aaron Straub. “We got beat up ... maybe I won’t see it, but I think I will, that we got beat up inside. They posted stronger than we did, and they were able to get the ball inside and scored and made some free throws down the stretch. We got what we wanted to his with our take, and it just didn’t go our way.

“I think you saw a team in DuBois Central that was really excited to play and really excited to compete. And, we got back on our heels a little bit. But, you go up 10, and you should build on that lead, and I did a poor job and we had some bad matchups and they hit a three and a drive there.

“Give all the credit to DuBois Central. They did a nice job and played hard and made shots and got rebounds.”

DuBois Central Catholic is off until Thursday when it hosts Harmony, while ECC gets a fast chance to erase the taste of the loss when it hosts Coudersport tonight.