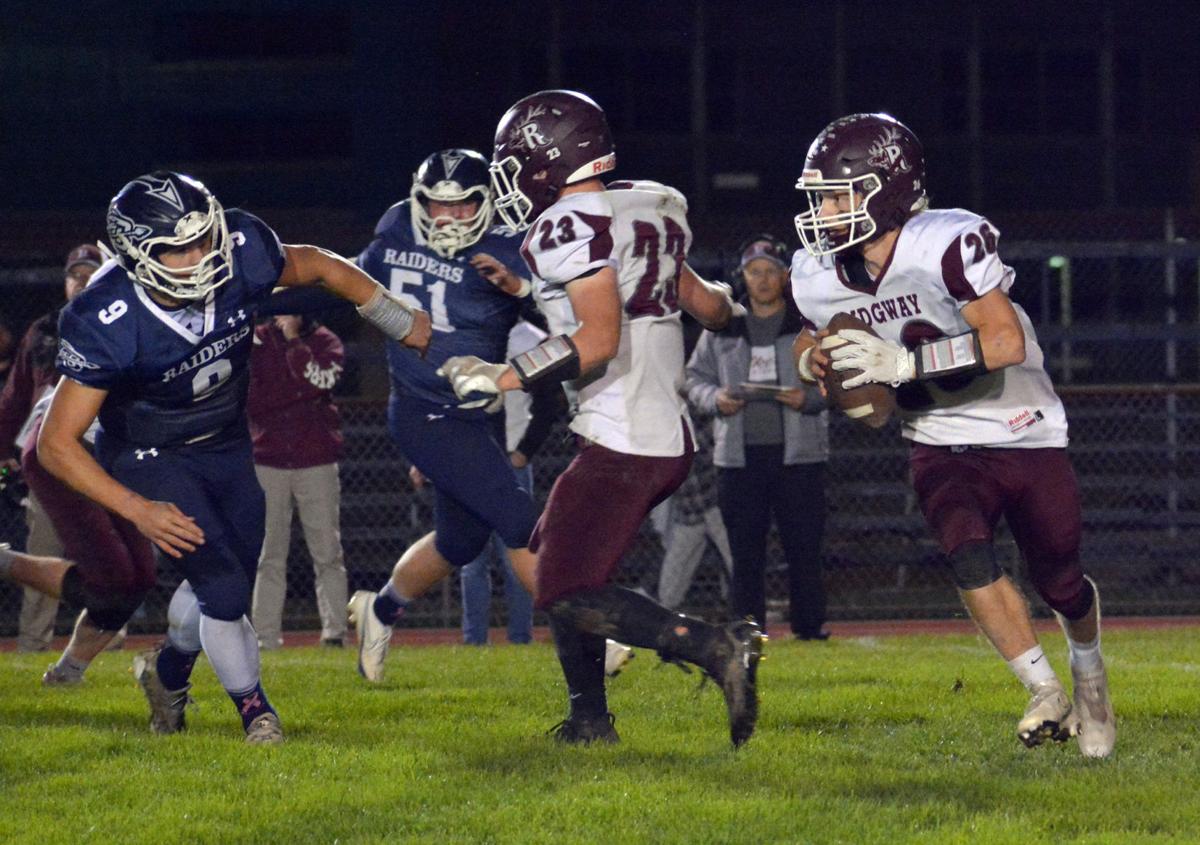 Ridgway quarterback Dom Allegretto (26) threw for 157 yards and a touchdown and also led the Elkers with 92 yards on the ground and a score as Ridgway knocked off Brookville 14-13 Friday night. 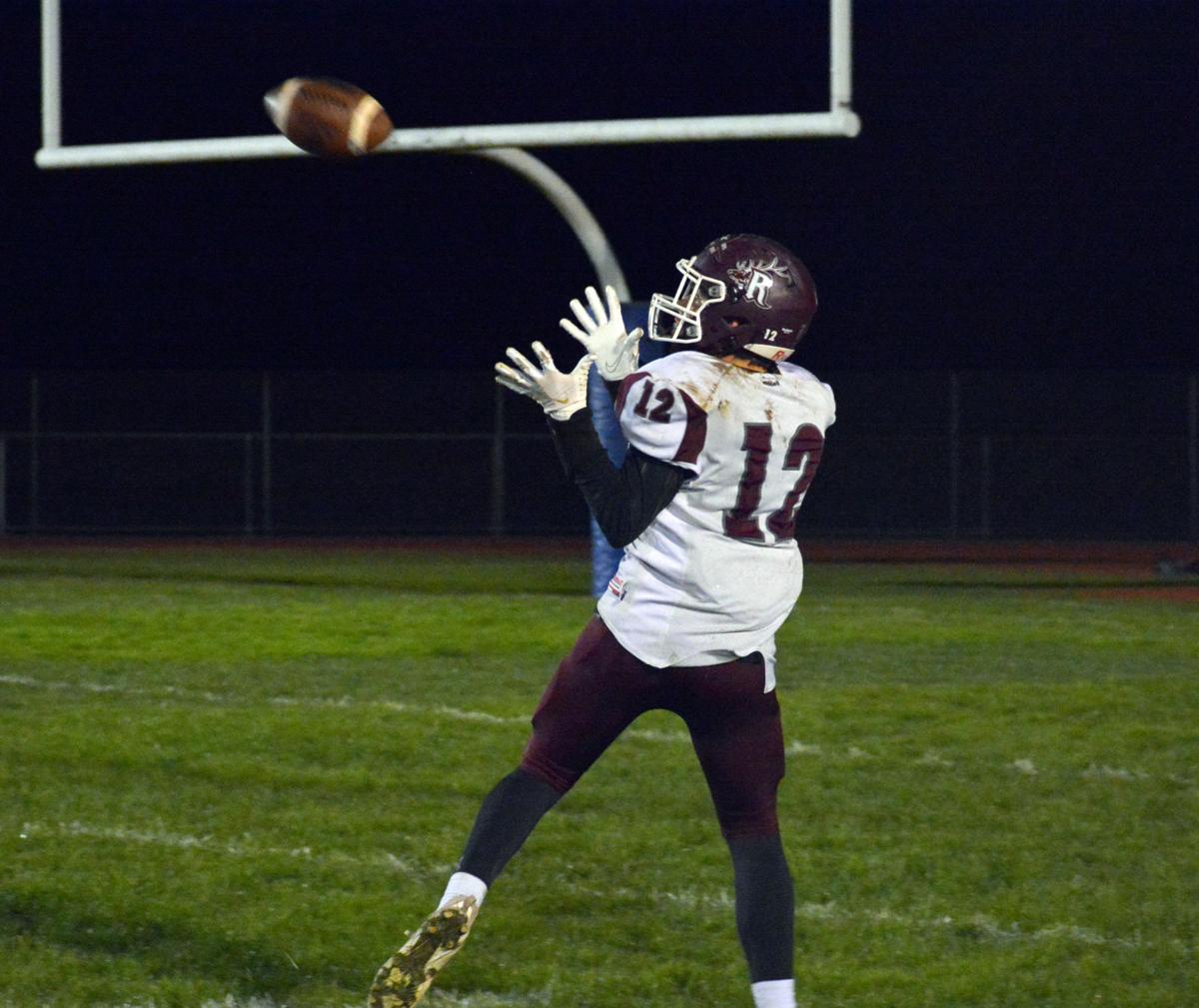 Ridgway Elker Eric Hoffman hauls in a 25-yard touchdown catch during the third quarter of Friday night’s game against Brookville. Ridgway would go on to win 14-13. 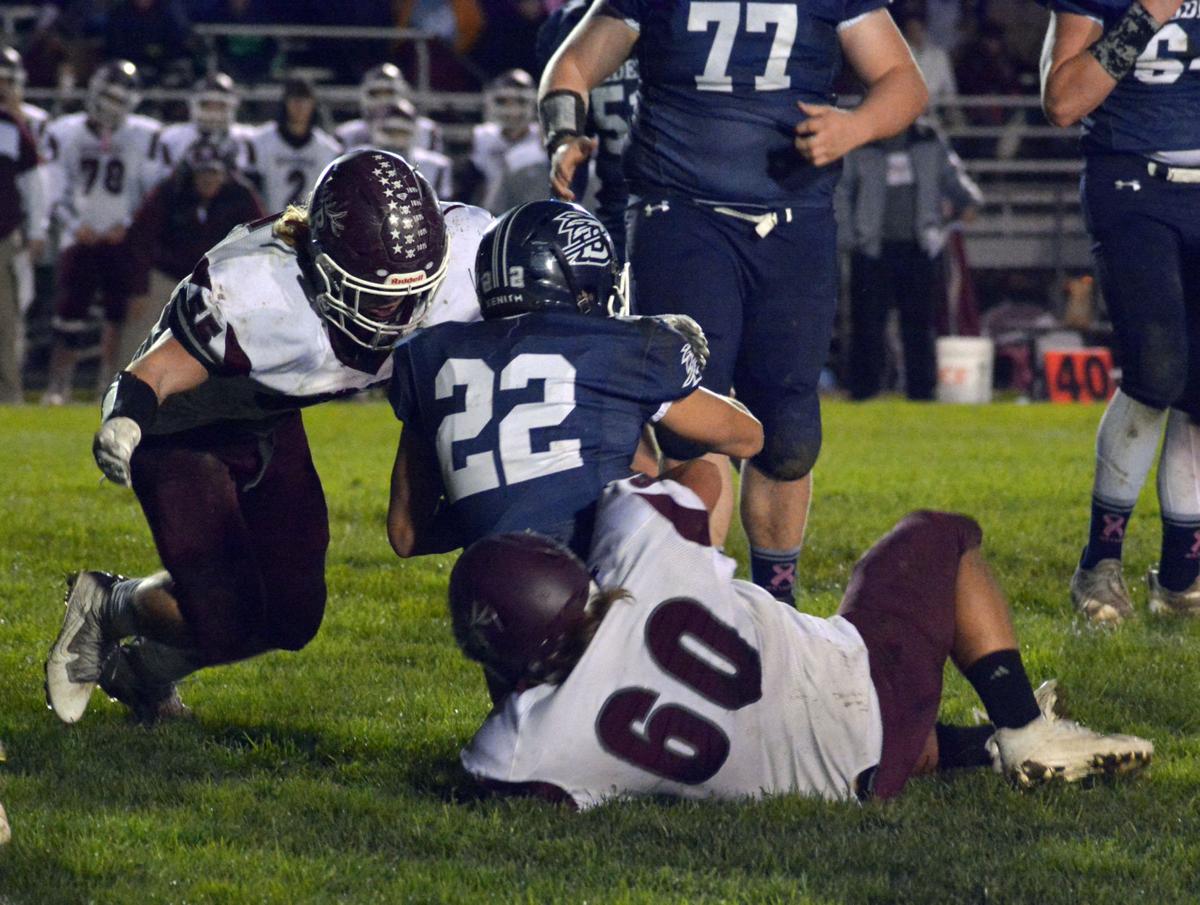 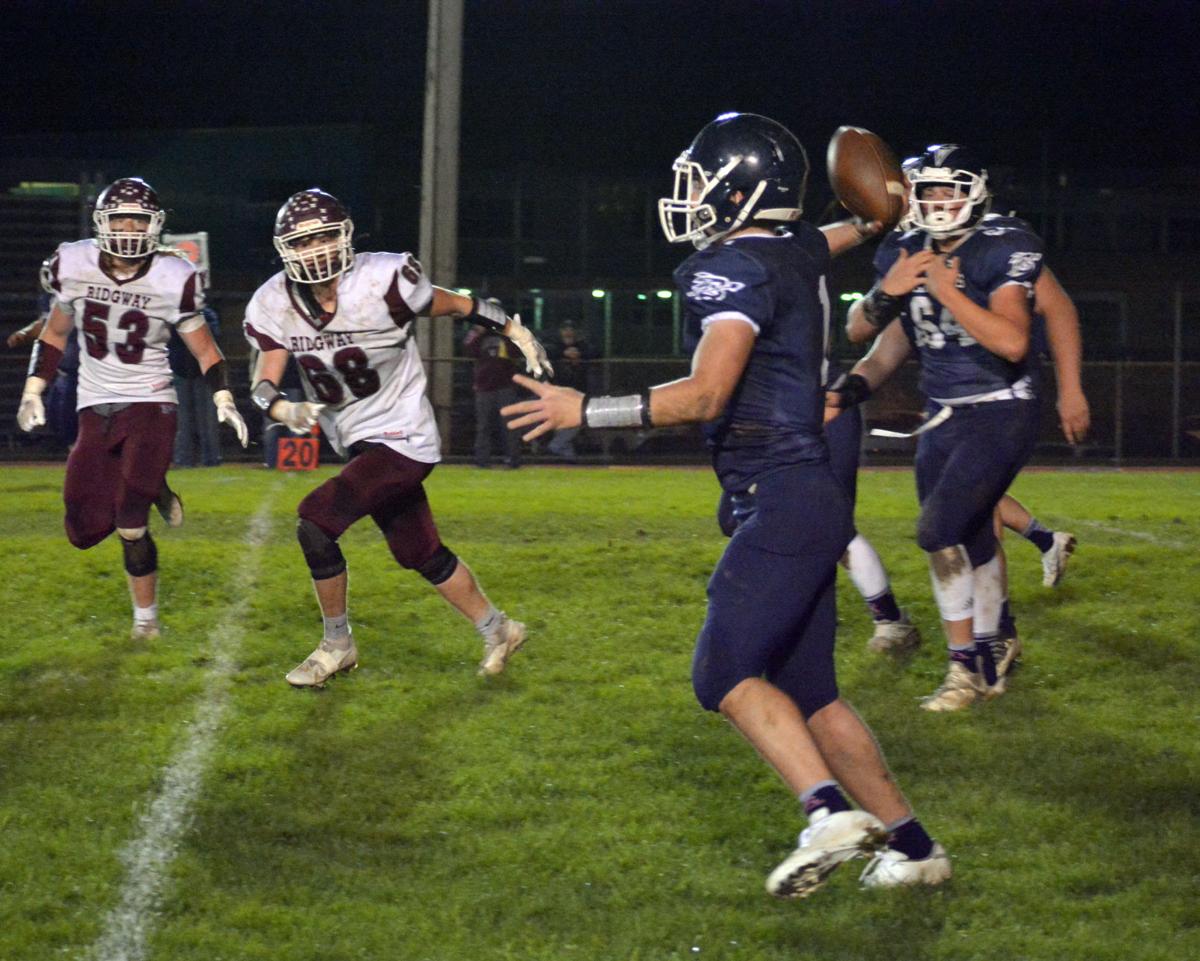 Brookville quarterback Charlie Krug gets ready to fire downfield during Friday night’s game against Ridgway. Krug would throw two touchdowns in the fourth quarter but it wasn’t enough as Ridgway took a 14-13 road win.

Ridgway quarterback Dom Allegretto (26) threw for 157 yards and a touchdown and also led the Elkers with 92 yards on the ground and a score as Ridgway knocked off Brookville 14-13 Friday night.

Ridgway Elker Eric Hoffman hauls in a 25-yard touchdown catch during the third quarter of Friday night’s game against Brookville. Ridgway would go on to win 14-13.

Brookville quarterback Charlie Krug gets ready to fire downfield during Friday night’s game against Ridgway. Krug would throw two touchdowns in the fourth quarter but it wasn’t enough as Ridgway took a 14-13 road win.

BROOKVILLE — It was all Ridgway on the scoreboard for the first three quarters of Friday night’s game against Brookville as the Elkers held a 14-0 lead going into the fourth quarter with not much offense by the Raiders to that point. After storming back, the Raiders would have a shot to tie with 40 seconds left, but a blocked PAT gave Ridgway the 14-13 victory.

Ridgway’s Dom Allegretto had 157 yards passing and a score while also rushing for 92 yards and another touchdown — both of which were game highs.

The Elkers only needed one play to get on the board after Brookville’s initial drive, as Allegretto took a keeper to the right side for 66 yards for the touchdown, with Jack Benninger’s extra point giving Ridgway a 7-0 lead just 4:11 into the game.

From there, both teams would get sustained drives and turnovers, with each coming up empty. A snap over punter Cam Marciniak’s head gave the Raiders great field position at the Ridgway 27-yard line but after an initial first down, a 4th-and-10 throw by Raiders QB Charlie Krug was dropped.

Ridgway gave the ball right back on an Eric Salberg fumble five plays later, setting up the Raiders at the Elkers 30-yard line. But as was the previous possession, Brookville was unable to come away with anything as Dan Park had a strip sack on Krug at the Ridgway 19-yard line and the Elkers recovered.

Ridgway then had its first sustained drive of the night into the second quarter that went for 59 yards on 13 plays — as Allegretto had two lengthy third down throws on 3rd-and-long to keep the drive alive — but Benninger missed a 33-yard field goal to end it.

It took until 4:01 left in the third quarter before any team found the end zone again, as Ridgway had great field position at the Brookville 27-yard line after Allegretto picked off a Krug pass. Allegretto was able to keep the drive alive on 4th-and-6 at the Brookville 23 as he scrambled for 12 yards. After a holding call backed up the Elkers to the Brookville 25, Allegretto found a wide open Eric Hoffman for the score, as Benninger’s PAT gave Ridgway a 14-0 lead on the road.

A Raiders’ three-and-out gave the Elkers to make it a three score game towards the end of the third quarter. But Ridgway would turn it over on downs as Allegretto’s scramble on 4th-and-9 from the Brookville 24 was three yards short.

Brookville’s comeback began as running back Tate Lindermuth was able to pick up a couple first downs before Krug as able to use his arm. Held to minimal yardage prior to the fourth quarter, Krug found Brayden Kunselman for 39 yards on a 2nd-and-26 play that got them down to the Ridgway 28-yard line. A Jackson Zimmerman bruising 11-yard run through the heart of the Elkers defense set up 1st-and-10 for Brookville at the Ridgway 11, but a couple runs ended up losing a yard.

On 3rd-and-11, Krug rolled out to the left and found Noah Peterson for a 12-yard touchdown over a Ridgway defender with 6:41 left in the game. Logan Oakes tacked on the extra point as Ridgway held a 14-7 lead.

All the momentum was with the home team as Brookville forced an Elkers three-and-out, but the Raiders only got three yards on a 4th-and-4 and turned it right over.

After the Elkers punted at midfield with 1:55 left, Brookville got the ball back at the Ridgway 21-yard line.

On 1st-and-10, Krug was able to buy time in the backfield and found Kunselman for a sideline, toe-tapping 19-yard gain that would’ve been a highlight on Sundays. It appeared the comeback was over on the next play as Allegretto picked off Krug, but a defensive holding call negated the turnover.

With the ball at midfield, Brookville needed four plays to find the end zone once again. Krug found Cooper Shall for an 11-yard pickup and a Ridgway late hit penalty set up Brookvile at the 21-yard line. That’s when Krug found Peterson in the end zone yet again for a 21-yard touchdown with 40 seconds left in the game.

It was all up to the extra point attempt to tie up the game, and that’s when the Elkers came through with the game-winning stop. A low PAT kick by Oakes allowed a slew of Elkers to be near the ball, as they knocked it down and held on to a 14-13 lead.

Brookville then was forced to go for the onside kick, but Ridgway recovered and then took a knee to cap off the 14-13 win.

Lindermuth led the Raiders with 76 yards rushing while Kunselman had six receptions for 79 yards.

Elkers wideout Will Howard led the team with 59 yards receiving.

After losing its previous two games and three of four, Ridgway moved to 6-3 on the season while Brookville fell to 6-3. Both teams are in action next week as Ridgway hosts Philipsburg-Osceola and Brookville travels to Brockway.

CO-EXECUTRICES’ NOTICE In re: Estate of DONALD R. YALE, a/k/a