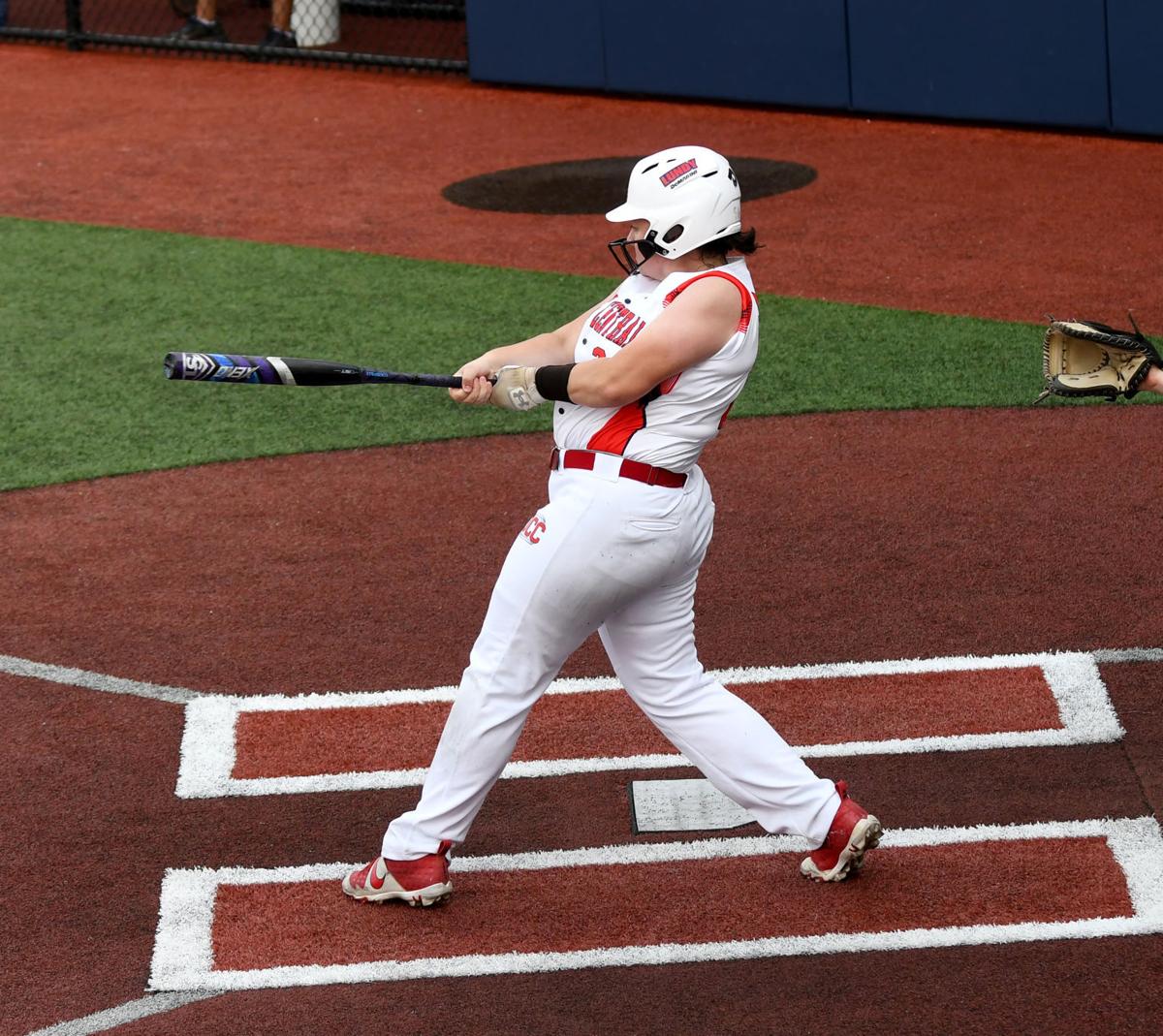 DuBois Central Catholic’s Shyanne Lundy, show hitting during a playoff game, has been named TCW/CE Co-Player of the Year with teammate Chelsea Busatto after both put together monster offensive seasons to help the Lady Cardinals reach the state semifinals. 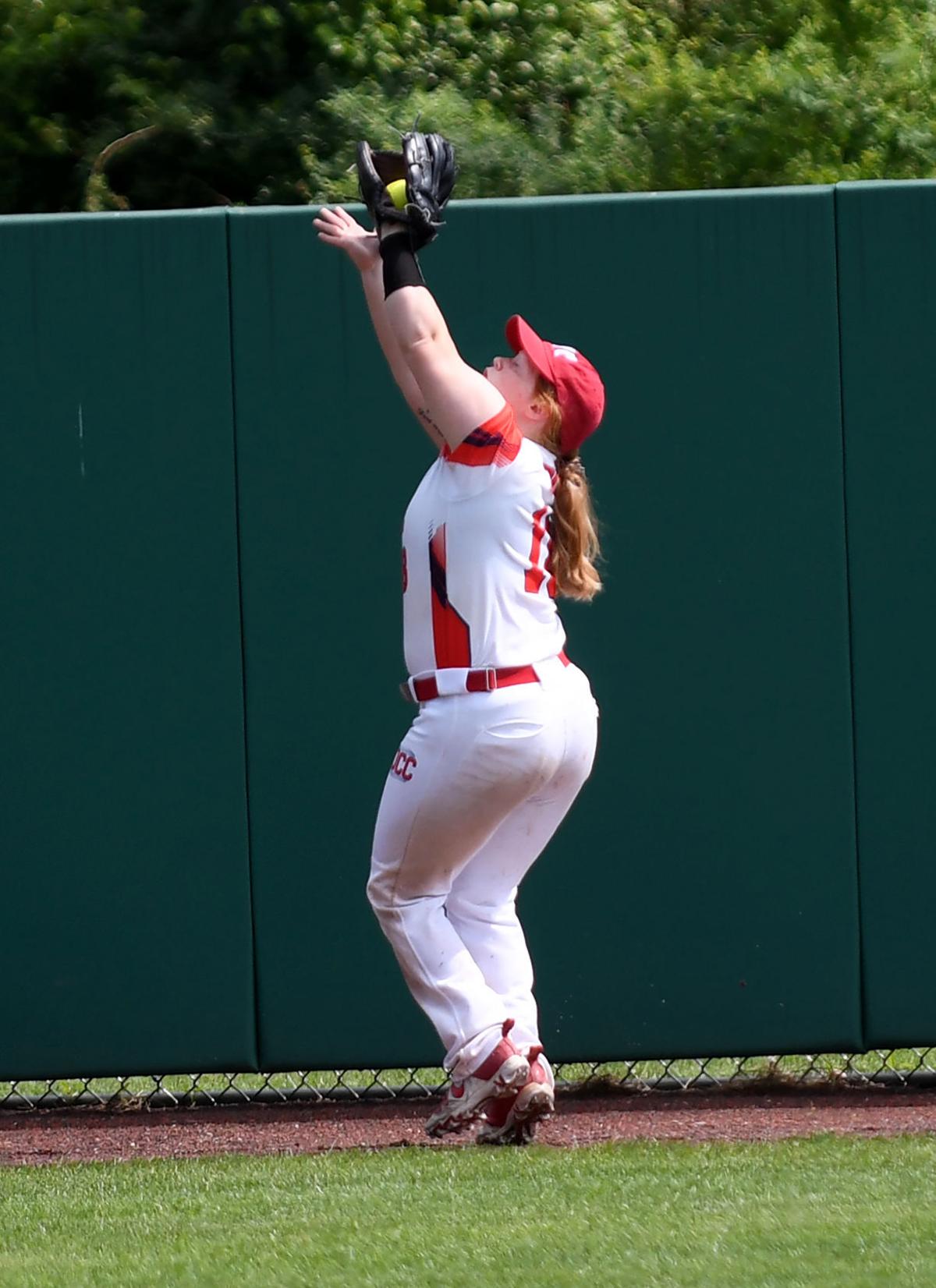 DuBois Central Catholic senior Chelsea Busatto, pictured running down a ball on the warning track during the state semifinals, has been named TCW/CE Co-Player of the Year with teammate Shyanne Lundy.

DuBois Central Catholic’s Shyanne Lundy, show hitting during a playoff game, has been named TCW/CE Co-Player of the Year with teammate Chelsea Busatto after both put together monster offensive seasons to help the Lady Cardinals reach the state semifinals.

DuBois Central Catholic senior Chelsea Busatto, pictured running down a ball on the warning track during the state semifinals, has been named TCW/CE Co-Player of the Year with teammate Shyanne Lundy.

DuBOIS — The 2021 high school softball season brought with it a lot of unknowns for the 10 teams in the Tri-County Area, largely because most of them entered the year with young and inexperienced rosters.

Coaches in essence had two freshmen classes, with the sophomores having missed their first varsity season because of COVID-19, while some upperclassmen (juniors and seniors) missed out on valuable experience they could have gained a year ago when some may have been starters for the first time.

The end result was a year of ups and downs for some teams, and when the dust settled, six of the 10 area teams finished with a running record. Five of those six recorded 12 wins or more.

That group was once again headlined by DuBois Central Catholic, which went 21-3 on its way to capturing yet another District 9 Class A title while making its fourth trip to the state semifinals in the last five postseasons. Given the Lady Cardinals success, it should come as no surprise they have a heavy presence on this year’s Tri-County Weekend/Courier Express All-Stars teams.

St. Marys (15-4) and Elk County Catholic (15-8) each reached 15 wins while sporting a large number of underclassmen in their starting lineups.

The Lady Dutch finished as the D-9 Class 4A runnerup again, while ECC lost the Class A consolation game to Clarion and fell one win short of reaching states. This marks the first sports season that Clarion is no longer part of the coverage area for the TCW/CE newspapers.

Johnsonburg (13-8), Curwensville (12-9) and Clarion-Limestone (9-8) also finished with winning records this season, with C-L making its first-ever trip to the PIAA playoffs as the D-9 Class A runner-up.

Individually, the lost season didn’t seem to phase area hitters as much as pitchers. Offense numbers from top to bottom were up with a total of 13 area players finishing with batting averages higher than .500 — including two over .600.

There was a large group of players from several different schools who most years could have staked claim to TCW/CE Player of the Year award, but in the end the DCC senior duo of Shyanne Lundy and Chelsea Busatto split the honor after being the anchors in the middle of a Lady Cardinal lineup that powered them to the state semifinals.

The senior duo combined for more than 80 hits and 60 runs scored, nearly 100 RBIs and 33 extra-base hits.

Here is a closer look at this year’s major award winners and TCW/CE All-Star Teams:

Shyanne Lundy, Sr., DuBois Central Catholic - Lundy became a full-time starter for the first as a senior and didn’t disappoint. She more than held her own defensively at first base and put up monster numbers offensively while hitting in the cleanup spot.

Chelsea Busatto, Sr., DuBois Central Catholic - Like Lundy, Busatto also put it all together in her final high school season while hitting behind Lundy in the batting order.

Busatto led DCC in average (.557), hits (44), doubles (15) and triples (3) and was second to Lundy in RBIs (48) while also scoring 30 runs. Those numbers also put her among the Tri-County Area leaders in most offensive categories.

The DCC left fielder led all area players in doubles and was second in hits, fourth in average, sixth in triples.

With Lundy and Busatto sharing the award, it marks the fifth straight season a DCC player has garnered Player of the Year honors. The last non-DCC player to win it was Elk County Catholic’s Abbey Bauer in 2015.

George Heigel, DuBois Central Catholic - Heigel did yet another great job of putting all the pieces together to help the Lady Cardinals make another run to the state semifinals as part of a 21-3 season.

Heigel entered the season with more than half his lineup being full-time starters for the first time, including four freshmen. That issue was further compounded when he had to make some changes when No. 1 pitcher Morgan Tyler went down with an injury and missed a large portion of the season before returning for the playoffs.

This marks the fourth time Heigel has been named Coach of the Year since he took over the program, with all four coming in the last five seasons played.

Pitcher: Kendall Young, Soph., St. Marys - Young is part of a young group of St. Marys players who had already made a name for themselves based on their success at the youth level in the various ages groups in Little League All-Stars, and her first season at the high school level was a continuation of that.

Young was dominant in the circle despite the Lady Dutch’s tough schedule and went 8-4 with with an ERA of 1.13 with 154 strikeouts in 81 1/3 innings. She led all area pitchers in strikeouts and ERA and was third in innings pitched.

Pitcher: Julia Jones, Soph., Johnsonburg - Jones proved to be a vital two-way player for the Ramettes as a pitcher and hitter in her first varsity season.

Offensively, she was among the top hitters in the area. She finished with a .563 average (36-for-64) with 34 RBIs and 32 runs. She also collected 20 extra-base hits (14 doubles, 3 triples, 3 home runs). She tied for second in the areas in doubles and ranked fifth in average and RBIs.

She also was dominant in the circle, posting a 1.83 ERA with 136 strikeouts in 80 1.3 innings of work, Unforunately, those numbers didn’t always equate to wins for Jones as she finished with just an 8-6 record because of some rough defensive play behind her throughout the season.

Catcher: Mia Meholick, Sr., DuBois Central Catholic - Meholick closed out her standout Lady Cardinal career with another strong season despite being pitched around a lot during the season — a move that ultimately hurt opponents give the years Lundy and Busatto had hitting behind her.

First Base: Lydia Anderson, Soph., Elk County Catholic - Anderson is part of a large youth movement at ECC coming off the lost 2020 season and put together a huge sophomore season for the Lady Crusaders while being one of the top defenders at first base in the area.

Anderson hit .539 (41-for-76) with 34 RBIs and 31 runs scored. She also smacked 10 doubles and a triple. She tied for fourth in the Tri-County Area in hits, fifth in RBIs, eighth in average and doubles and ninth in runs scored.

Middle Infield: Olivia Eckels, Soph., St. Marys - Like Young, Eckels was another key cog in St. Marys’ success at the Little League All-Star success. However, she stepped it up a notch in her first varsity season and became the best second baseman in the area.

Eckels led or tied the team lead in every major offensive category while playing strong defensively. She hit .492 (29-for-59) with nine doubles, one triple and three homers. She finished with 18 RBIs and scored 22 runs.

Middle Infield: Kara Hanslovan, Fr., St. Marys - Hanslovan was part of the “Big 3” when it came to Little League All-Stars for St. Marys, and like Young and Eckels, carried that role and success over into high school in her first varsity season despite still trying to recover from a previous knee injury.

Hanslovan finished the season with a .447 average (21-for-47) with one double, one homer, 12 RBIs and 15 runs scored. She also locked down the shortstop position defensively for the Lady Dutch as a freshman.

Middle Infield: Kendall Dunn, Soph., Clarion-Limestone - After missing out on her freshman year because of COVID-19, Dunn enjoyed a breakout season as a sophomore for the Lady Lions.

She led all Tri-County Area players with a .656 batting average and was sixth in hits with 40. She also smacked six doubles and an area-best seven triples to go along with 28 RBIs and 22 runs scored.

Third Base: Madison Hoyt, Jr., DuBois Central Catholic - While her teammates Lundy and Busatto shared Player of the year honors, Hoyt was arguably DCC’s Most Valuable Player — something even Heigel stated following a state semifinal loss to West Greene.

That’s because Hoyt was forced into the No. 1 pitcher role for half the season when Morgan Tyler was out with an injury. All Hoy did in that role was go 9-2 with a 3.23 ERA and 45 strikeouts in 47 2/3 innings of work.

Outfield: Abby Pentz, Sr., Curwensville - Pentz, one of just four seniors on the First Team, closed out her Lady Tide career in style with a huge year at the plate while splitting her team between center field and shortstop defensively.

Pentz hit .581 (43-for-74) on the season with 36 RBIs and 44 runs scored while amassing an impressive 26 extra-base hits (14 doubles, 5 doubles, 7 homers). She led the area in home runs and was second in runs and doubles, third in average and hits and fourth in RBIs.

Outfield: Morgan Pasternak, Fr., DuBois - Pasternak made the jump to the varsity level with flying colors as a freshman and proved to be a lockdown defender while patrolling center field. She also more than held her own at the plate depsite DuBois’ tough schedule that saw the Lady Beavers face multiple pitchers who recently earned All-State honors in different classifications.

Pasternak sported a .408 average (20-for-49) with a team-high four doubles, one triple, one homer, 12 RBIs and 24 runs. She led the team in average and doubles and ranked second in hits and runs and was third in RBIs.

Outfield: Emma Suplizio, Jr., DuBois Central Catholic - Like so many other players this year, Suplizio took her first opportunity to be a starter and ran with it and was a key cog in the offense hitting in the No. 2 spot ahead of Lundy and Busatto.

She finished the year with a .507 batting average (37-for-73) with 27 RBIs and 42 runs scored _ which ranked third in the area. She also had seven doubles and three triples.

Designated Player: Emily Mourer, Fr., Elk County Catholic - Mourer was easily ECC’s team MVP this season, if for another reason than she stepped up to learn arguably the toughest and most important position in softball — pitcher.

Mourer filled a major void in the circle for ECC, and while she had some growing pains, finished the season with an 11-5 record. She recorded 115 strikeouts with a 5.22 ERA while throwing the most innings (99 1/3) by any pitcher in the area. She ranked second in the area in wins and fourth in strikeouts.

However, it’s what Mourer did with the bat that really opened eyes as she posted a .634 average (45-for-71) with 37 RBIs and 22 runs scored. She also had 21 extra-base hits (14 doubles, 2 triples, 5 home runs). She led all area players in in hits and was second in average and doubles and third in RBIs and home runs.

Utility: Sarah Henninger, Jr., DuBois - Coming off a monster freshman campaign in 2019 and the lost 2020 season, Henninger once again proved to be the Lady Beavers’ top hitter while making a transition defensively. She started the season at catcher, where she played as a freshman, but moved out to shortstop full-time as the season progressed.