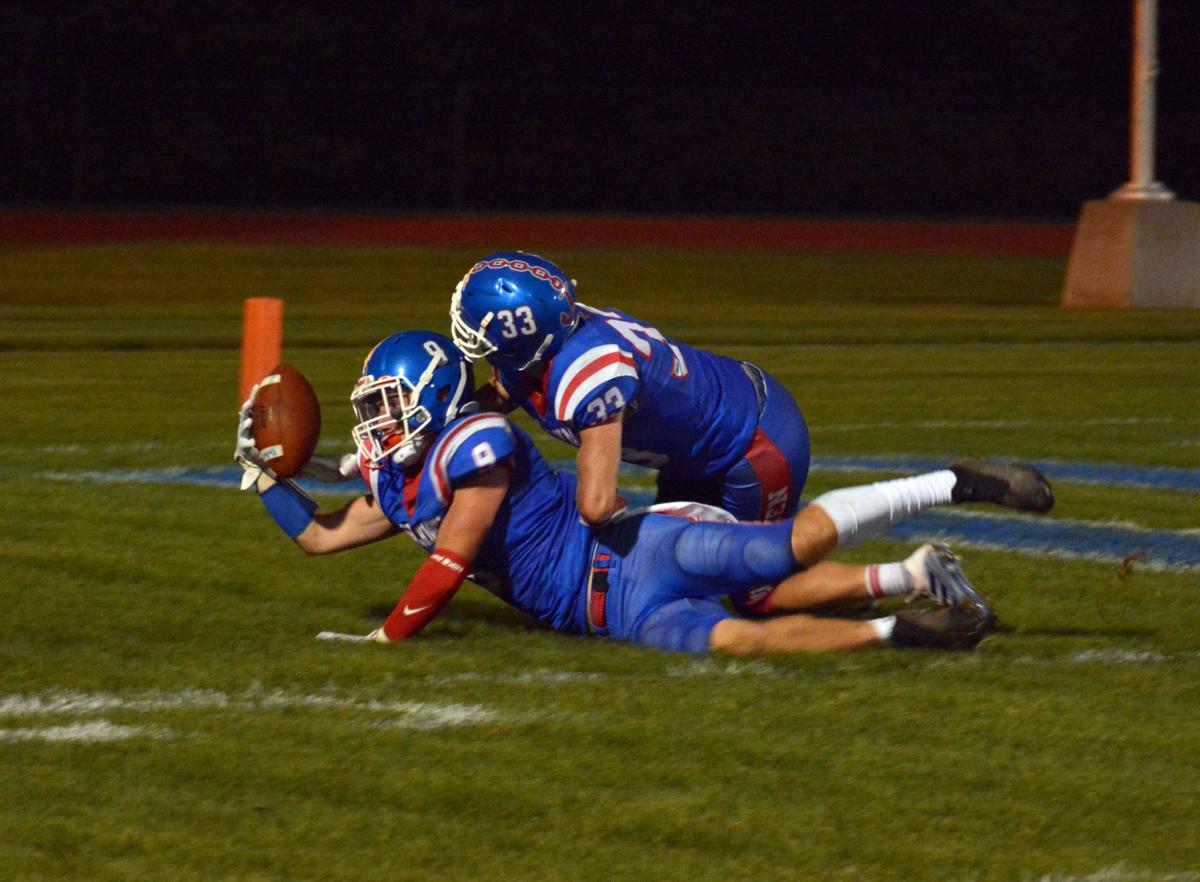 St. Marys’ Collin Reitz (9) makes an acrobatic interception in the end zone with teammate Logan Mosier (33) from DuBois quarterback Austin Mitchell. Reitz also had five receptions for 75 yards as the Flying Dutchmen would go on to win 14-7. 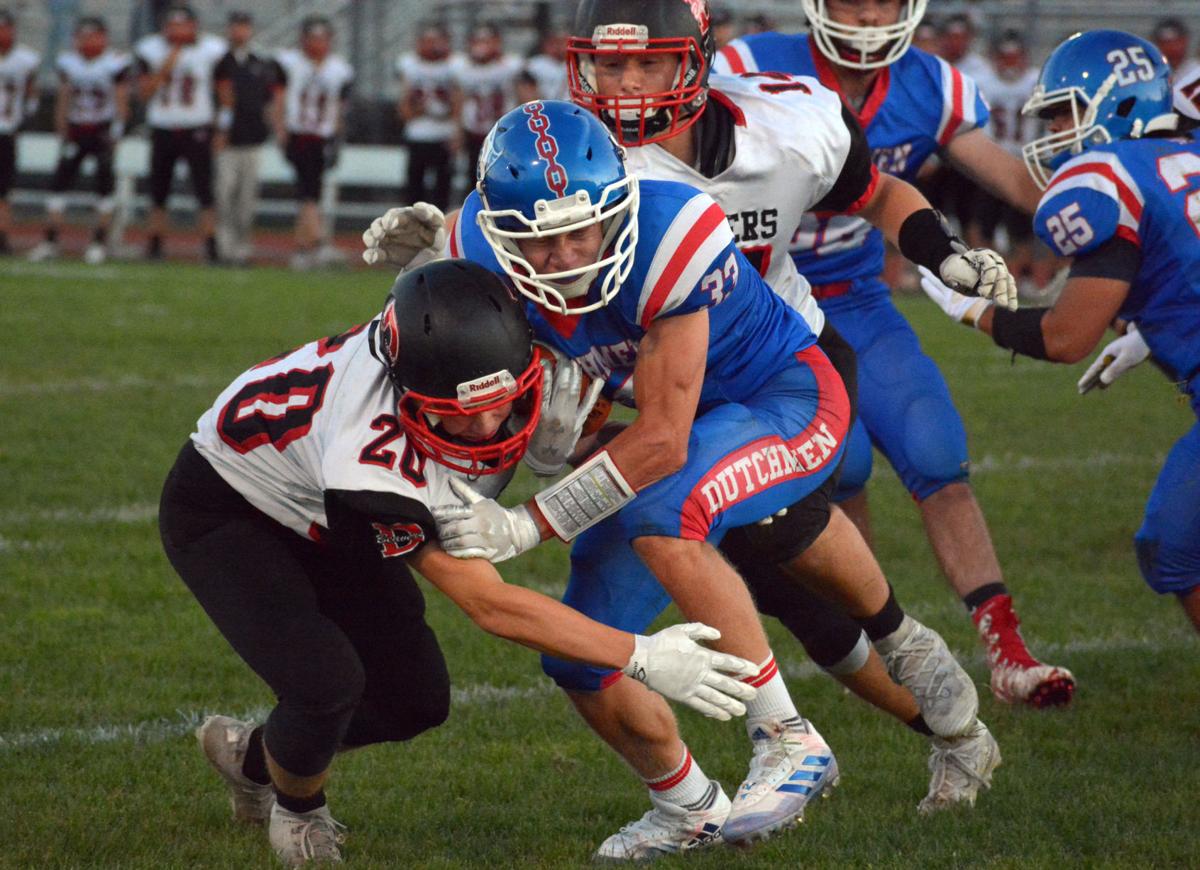 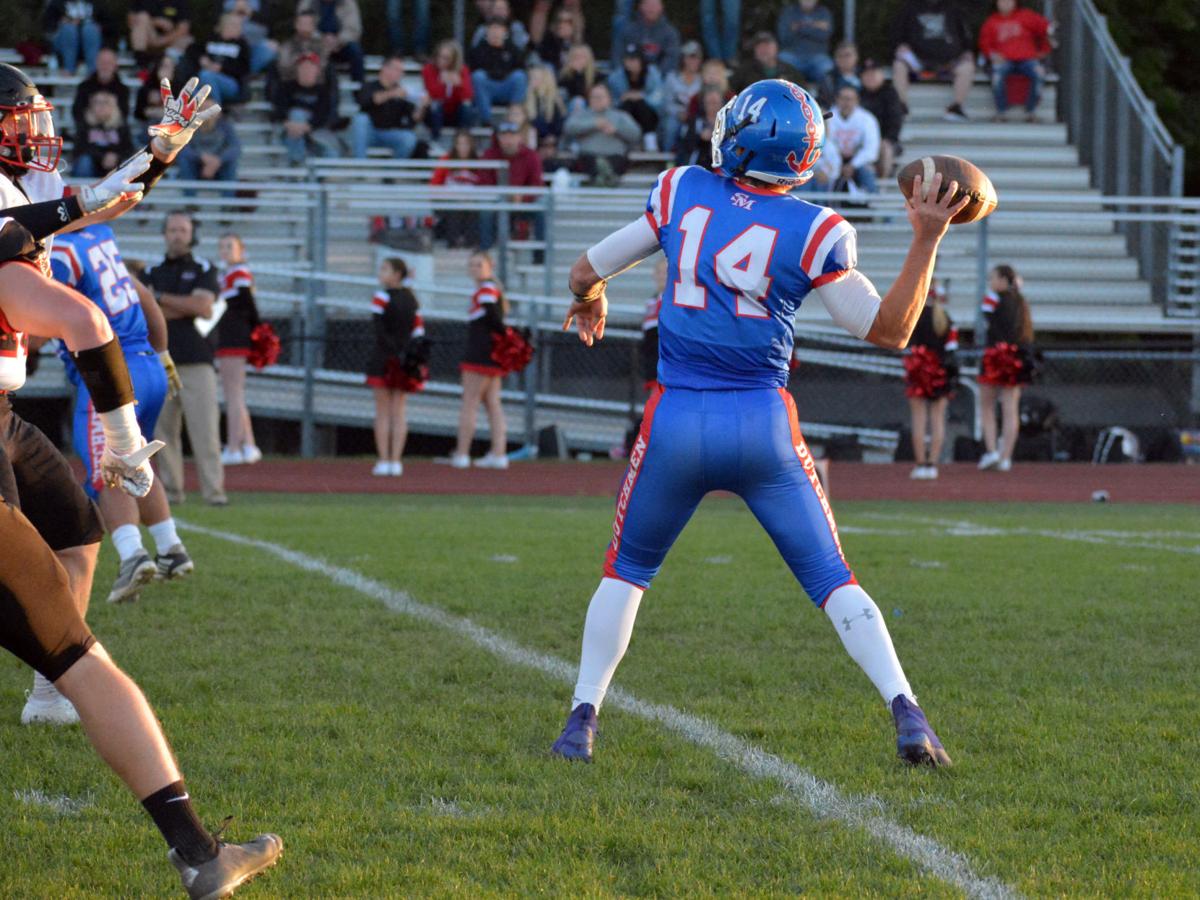 St. Marys quarterback Christian Coudriet was 24-of-35 for 241 yards Friday night against the DuBois Beavers, while throwing for a score and running one in himself. The Flying Dutchmen would pick up a 14-7 win over the Beavers. 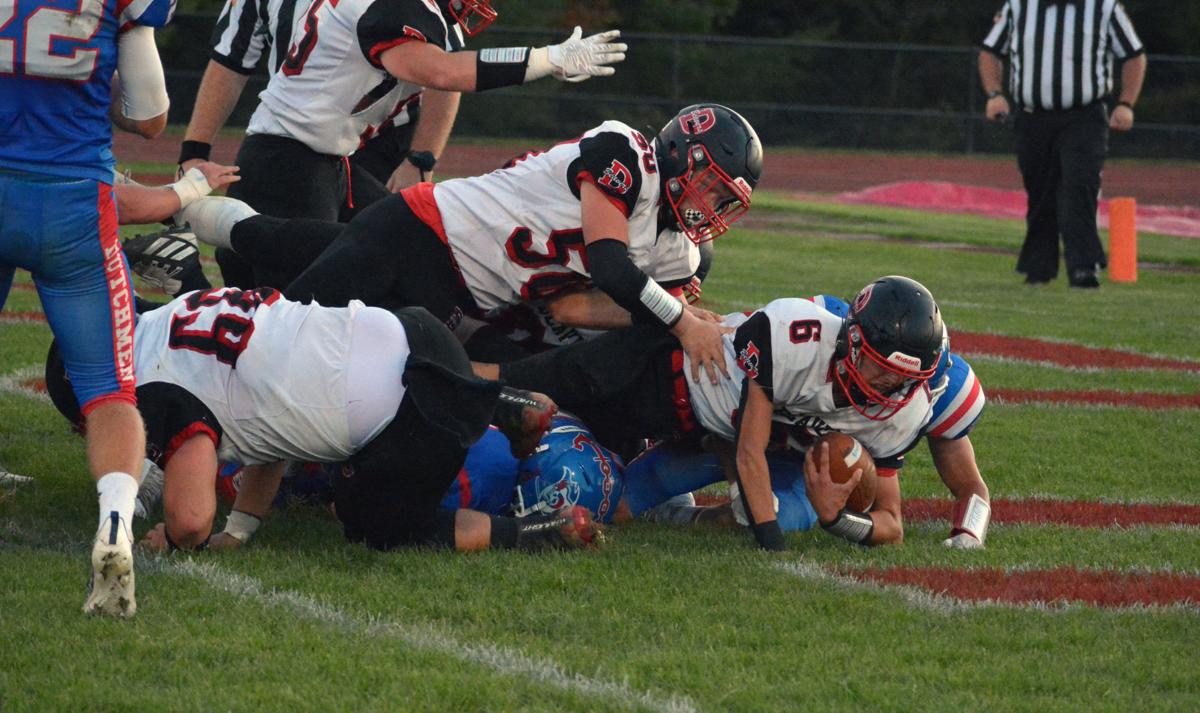 DuBois Beavers quarterback Austin Mitchell (6) gets into the end zone in the first quarter of Friday night’s game against St. Marys. DuBois would go up 7-0 at the time. However, the Beavers would fall to St. Marys 14-7.

St. Marys’ Collin Reitz (9) makes an acrobatic interception in the end zone with teammate Logan Mosier (33) from DuBois quarterback Austin Mitchell. Reitz also had five receptions for 75 yards as the Flying Dutchmen would go on to win 14-7.

St. Marys quarterback Christian Coudriet was 24-of-35 for 241 yards Friday night against the DuBois Beavers, while throwing for a score and running one in himself. The Flying Dutchmen would pick up a 14-7 win over the Beavers.

DuBois Beavers quarterback Austin Mitchell (6) gets into the end zone in the first quarter of Friday night’s game against St. Marys. DuBois would go up 7-0 at the time. However, the Beavers would fall to St. Marys 14-7.

ST. MARYS — It was a back and forth battle between the visiting DuBois Beavers and the home St. Marys Flying Dutchmen Friday night at Dutch Country Stadium that saw only three touchdowns throughout but plenty of game-changing turnovers as the Flying Dutchmen earned a 14-7 win.

St. Marys quarterback Christian Coudriet was 24-of-35 for 241 yards and a touchdown — and he also scored the second Flying Dutchmen TD of the game from two yards out.

The Flying Dutchmen picked off DuBois quarterback Austin Mitchell on three occasions — two of which were in the end zone — after sustained drives by the Beavers.

After DuBois couldn’t get anything going on its opening drive, St. Marys marched down to the DuBois 19-yard line, thanks in part to a big 40-yard reception by Collin Reitz as Coudriet found the receiver in stride. But the Flying Dutchmen couldn’t convert on 4th-and-14 and gave it back to the Beavers.

After a holding penalty, DuBois then went 91 yards on 12 plays, converting two big third downs along the way. The first was a 3rd-and-15 that Mitchell scrambled for exactly what was needed and the second was a 3rd-and-8 reception by Cadin Delaney that went for 27 yards.

Brycen Dinkfelt hauled in a 19-yard catch that got the Beavers to the St. Marys’ 2-yard line before Mitchell punched it in with 9.4 seconds left in the first quarter. Charlie Harman’s PAT gave the visitors a 7-0 lead.

DuBois kept the momentum going as Coudriet was picked off by Erich Benjamin on the ensuing drive, but both teams’ defenses would step up in big ways and create three-and-outs until midway through the second quarter. On a 3rd-and-22 play, Mitchell would fumble and a St. Marys player would emerge from the pile with the pigskin at the DuBois 39-yard line.

Coudriet would find Logan Mosier in stride for a 38-yard play down to the DuBois 1-yard line. After Coudriet’s initial QB keeper was thwarted, he found Mosier on the 1-yard TD with 5:22 left in the second quarter.

As St. Marys lined up for the PAT with Coudriet ready to attempt, the Flying Dutchmen ran a fake that saw Coudriet throw a pass to Tristan Dilley that was too high for the wideout to reel in, giving DuBois a 7-6 lead.

The Beavers would later get good field position at the St. Marys 39-yard line late in the second quarter. They then got a break on 4th-and-5 at the 34-yard line as St. Marys was called for encroachment — giving the Beavers an easy first down.

But on the very next play, Mitchell took a shot to the end zone intended for Cam-Ron Hays while covered Reitz and Mosier. Hays was able to get his hands on it but it was knocked away before Reitz was able to make a one-handed grab for the interception in the end zone with less than 30 seconds left in the half.

DuBois would go into the locker room with a 7-6 lead with St. Marys getting the ball back to start the second half. However, the Flying Dutchmen could only make it out to near midfield before punting away to the Beavers.

Big plays would then force the Beavers to punt, as Mosier was able to weave through DuBois defenders for a 51-yard return that gave St. Marys its best starting field position of the day at the DuBois 6-yard line.

After Carter Chadsey had a 4-yard reception to the DuBois 2-yard line, Coudriet did the rest on a QB keeper with 7:05 left in the third quarter for the score. The Flying Dutchmen would go for two, as Coudriet found Tony Lewis for the conversion and a 14-7 lead.

Both teams would go scoreless the rest of the way — but each had opportunities to put more points on the board, as each came away empty.

DuBois would go three-and-out after St. Marys took the lead as the Flying Dutchmen would go 10 plays for 59 yards before a 4th-and-1 attempt at the DuBois 31-yard line missed its mark as Coudriet’s pass to Mosier was too high.

Each team then went three-and-out to start the fourth quarter — with DuBois getting great field position thanks to a 23-yard Benjamin punt return that set up the Beavers at the St. Marys 35-yard line.

With DuBois making things happen through the air for the majority of the night, they turned their attention to the run with Mitchell and Austin Henery. But the Beavers would stall out and on 3rd-and-10 from the Flying Dutchmen 14-yard line, Mitchell’s pass intended for Delaney was picked off in the end zone by Chadsey.

After an initial 20-yard reception by Chadsey set St. Marys up at its own 40-yard line, the Flying Dutchmen were unable to do anything else and punted away to the Beavers, as they started the drive at their own 26-yard line.

On 2nd-and-10, a screen play to Braxton Adams went for 37-yards. Adams had no one in front as he got away, but Mosier was able to make what likely was a touchdown-saving tackle at the St. Marys 37-yard line.

Two plays later, Conner Straub would pick off Mitchell with 2:11 left in the game as St. Marys tried to run out the clock from its own 44-yard line. But after a holding call moved the Flying Dutchmen back for a 1st-and-20, Chadsey had a 7-yard reception as DuBois called its second timeout with 1:37 left.

On 2nd-and-13, running back Justin Dornisch — who had been bottled up by the Beavers until late in the fourth quarter — busted off a 19-yard run for the first down. DuBois called its final timeout with 1:13 left to play, but two kneel downs by the Flying Dutchmen ran out the clock and gave them the 14-7 victory.

Reitz and Chadsey each had five receptions for 75 yards for St. Marys. Mitchell had 122 yards passing with Dinkfelt leading the Beavers with 42 yards on five receptions. Mitchell also led all runners on the ground with 35 yards, followed by Dornish with 33 for the Flying Dutchmen.

St. Marys improves to 2-1 on the season and travels to Punxsutawney on Friday. DuBois falls to 0-3 as the Beavers look to get on track Friday when they host Kane.